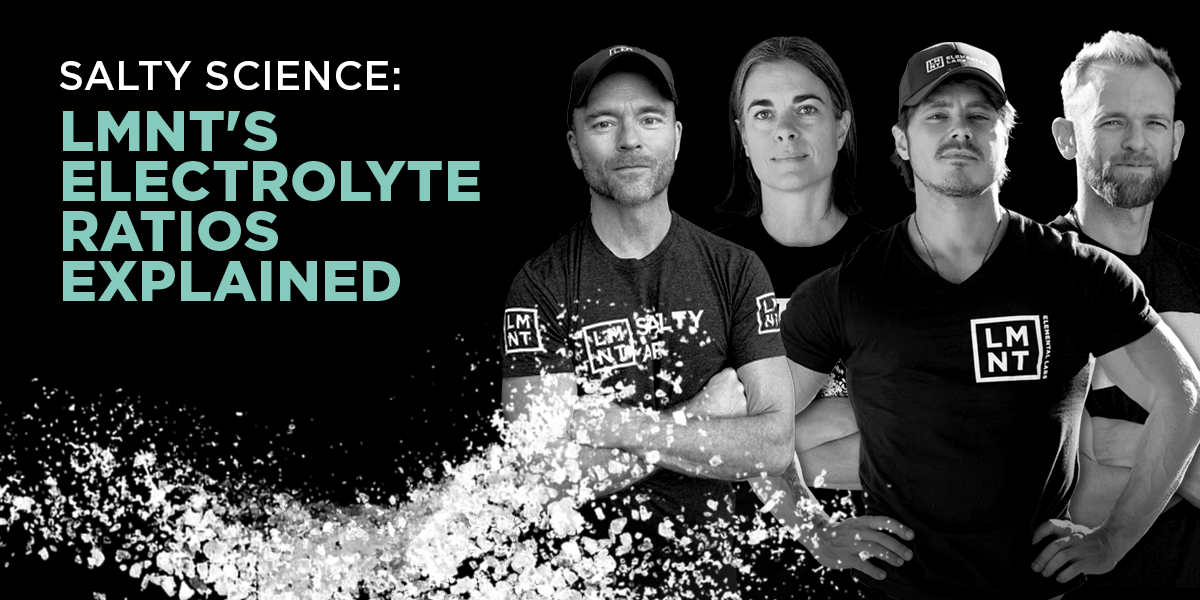 LMNT contains 1000 mg sodium, 200 mg potassium, 60 mg magnesium and no sugar. This bold yet simple formula is based on the latest scientific literature and evidence gathered from coaching tens of thousands of clients. In this post we share the background and scientific underpinnings for the LMNT formulation.

Finding a solution in plain sight

As a former research biochemist and New York Times bestselling author, Robb Wolf is well-versed on the intricacies of metabolism, especially in the context of fasting and low-carb diets. And his former coaches spent years assessing and optimizing the diets of their community. This combination unlocked a powerful insight.

When Robb—frustrated with his performance on the jiu jitsu mat—came to his coaches for advice, they knew immediately: he needed to dial in his electrolytes, specifically sodium. And when he took their advice, a switch flipped, both on and off the mat.

But he wasn’t alone. Others adhering to otherwise healthy whole foods diets were exhibiting the symptoms of sodium, potassium, and magnesium deficiencies, too. Robb and his former coaches started to tinker with DIY electrolyte drink recipes and share them with their communities. It wasn’t long before people began to realize how much better they felt when they got the right amount of sodium.

The glaring gap in the electrolyte drink market suddenly seemed obvious. Everything in store was either woefully lacking in sodium, contained loads of sugar, or both. Sweat isn’t sweet, so why were all the so-called ‘sports’ drinks? That’s right. Just as important as what we put in LMNT is what we left out: calcium, phosphorus, and public health enemy #1: sugar.

Next we’ll cover the clinical evidence behind the LMNT electrolyte ratio, starting with sodium, and then potassium, magnesium, calcium, phosphorus, and trace minerals.

LMNT has enough sodium to move the needle (i.e. a game changer). It’s formulated with an eye towards the clinical data, the underlying science, and our experience coaching thousands of clients on nutrition and lifestyle.

But why do we put a full gram of sodium in every stick pack? Isn’t salt bad for your heart? The truth is, that’s not nearly as cut and dry as it’s been made out to be. Sodium is an essential mineral—the stuff of life—and we’ve never been shy to address the misinformation around it.

There are several reasons why we decided to include 1 gram of sodium:

We didn’t pull that figure out of thin air. This 2011 JAMA study found that 4–6 grams of sodium per day was the sweet spot for minimizing heart attack and stroke risk. However, 4–6 grams is a starting point. Folks with any of the aforementioned diet and lifestyle factors tend to need even more.

For example: folks on keto eat very low-carb, whole foods diets. A low-carb diet keeps insulin low, which consequently makes your kidneys excrete sodium at an increased rate. And when you eliminate processed foods—which contribute ~70% of sodium intake for people in the US—the salt shaker simply isn’t enough to make up for those losses.

That’s the inside scoop on why LMNT is so salty.

Every stick of LMNT contains 200 mg of potassium. That’s a 5:1 ratio of sodium to potassium. Let us explain how we came to this number.

When we did our dietary assessment, clients were 5 grams short on sodium, and about 1 gram short on potassium. Diets low in carbs are often low in potassium-rich foods like fruit and potatoes. Plus, more potassium is lost through urine on keto.

Potassium is also an issue for people eating a plant-poor Standard American Diet (SAD). The SAD is why only 3% of Americans reach the Institute of Medicine’s target of 4.7 grams of potassium per day. This target was set in 2005 based on evidence that potassium can help lower blood pressure and reduce the risk of kidney stones. The evidence is strong, especially for potassium reducing blood pressure.

It’s a great target to shoot for, but potentially a difficult one for low-carb folks to achieve. We recommend getting between 3.5–5 grams of potassium per day based on the published evidence. When establishing your personal goal, keep in mind factors like your size, sodium intake, activity level, and whether you’re pregnant or breastfeeding. These and other diet & lifestyle factors all affect your potassium needs.

While we could have put more potassium in LMNT, we find it’s ideal to consume potassium mostly through diet. Eating foods such as meat, avocados, spinach, etc. should get you most of the way to the optimal sodium-potassium pump ratio (3:2).

The sodium-potassium pump, if you didn’t know, is a protein pump in our neurons’ cell membranes. For every 3 sodium ions it releases, it takes in 2 potassium ions. So to help our pump function optimally, our intake should reflect this ratio. The sodium-to-potassium ratio in LMNT (5:1) accounts for the increased sodium loss that low-carbers, intermittent fasters, and athletes all experience. It puts us in a better position to hit the 3:2 sodium-potassium pump ratio when consumed alongside a minimally processed, nutrient-dense diet.

Also, there’s a small risk of hyperkalemia (high serum potassium) when those with impaired kidney function take higher doses of potassium. It may be counter-intuitive, but it is both easier and more dangerous to overdo potassium compared to sodium.

Those are the primary reasons that we landed on 200 mg of potassium when refining LMNT’s formula.

Magnesium is a crucial mineral. It aids in energy production, DNA repair, muscle synthesis, restful sleep, and many other things we care about.

Up to 30% of the population may be deficient in magnesium.[*] This is likely why we see positive effects from magnesium supplementation on sleep, strength, anxiety, and depression.[*][*][*][*]

Anthropological evidence suggests that our ancestors consumed about 600 mg of magnesium per day. 400–600 mg seems to be a reasonable target for optimal health, and there’s no downside to shooting for the upper end of that range.

Our dietary assessment suggested that most people were 200–300 mg short on magnesium, despite eating magnesium-rich, whole foods diets. This informed the dosage of magnesium (60 mg) in LMNT. 60 mg is also one-fifth of the way to that 300 mg mark, just like the doses of sodium and potassium are one-fifth of their respective needed amounts.

Why Don’t We Use Calcium?

LMNT doesn’t contain calcium, in part because many people are already getting the RDA (about a gram) through a whole foods diet.

But we also have concerns about supplemental calcium. Some clinical evidence suggests that calcium supplements increase soft tissue calcification in the arteries, among other places. This may increase heart disease risk. Some speculate that this effect is exacerbated by widespread vitamin D deficiency or could be mitigated by vitamin K2, but further research is required to determine whether or not this combination of nutrients could actually improve cardiovascular health.

We decided to keep LMNT’s formulation both simple and effective. We’re not against calcium, we just encourage folks to get their 1 gram per day through diet. And if, like us, you eat a whole foods, low-carb, ketogenic, or Paleo diet, the chances are you’re already hitting that.

Why Don’t We Use Phosphorus?

It was a no-brainer to skip the phosphorus (also called phosphate) in LMNT.

Phosphorus deficiency is extremely rare because phosphate is abundant in the food supply. Most people actually consume too much of it.

An excess intake of phosphorus elevates a hormone called PTH, which in turn tells your bones to shed calcium. Not ideal for bone density. Sometimes more is not better.

What About Trace Minerals?

Trace minerals are minerals that are present in small amounts in the human body. Some are essential for proper function, while others scientists remain unsure about.

The main trace minerals are:

Let’s double click on iodine, a trace mineral that can be difficult to get via diet. Iodine is required for the production of thyroid hormones, crucial chemical messengers that regulate calorie burn, body temperature, muscle contraction, and much more. Iodine deficiency leads to low thyroid hormones, which is problematic for the developing brain. Evidence links iodine deficiency (in both mother and child) to an increased risk of childhood learning disabilities—which is a big reason why table salt is often fortified with iodine.

We don’t include iodine in LMNT—not because we don’t think it’s important—but because we know that not everyone will benefit from iodized salt. For example, calculating iodine intake based on salt intake can make it hard for some to manage thyroid disorders. Also, many people already get plenty of iodine through seafood, and too much iodine can be problematic.

As for the other trace minerals, you’ve probably seen ads touting Himalayan pink salt or sea salt as “mineral-rich.” Simply put, we believe in obtaining micronutrients from nutrient-dense whole foods first and foremost. The minute amounts of trace minerals found in sea salt and pink salt are easily obtainable from other healthy foods.

This article—Are some types of salt better than others?—addresses our choice of salt.

The Electrolytes In LMNT

As you can now likely recall in your sleep, each serving of LMNT contains:

LMNT’s science-backed ratio of electrolytes is of key importance. It allows you to get enough of these vital minerals without throwing off your body’s very particular electrolyte balance.

We want healthful hydration to be an easy box to check on your path to health and wellness. Bring a stick pack of LMNT wherever you’re headed, add it to water, and drink to thirst. We also recognize that hydration is only one important factor in our well-being and strongly recommend  eating a diet of minimally processed whole foods as a part of a holistic solution to health.

Lastly, we understand that LMNT isn’t an option for anyone. With that in mind, let’s end on two practical notes: