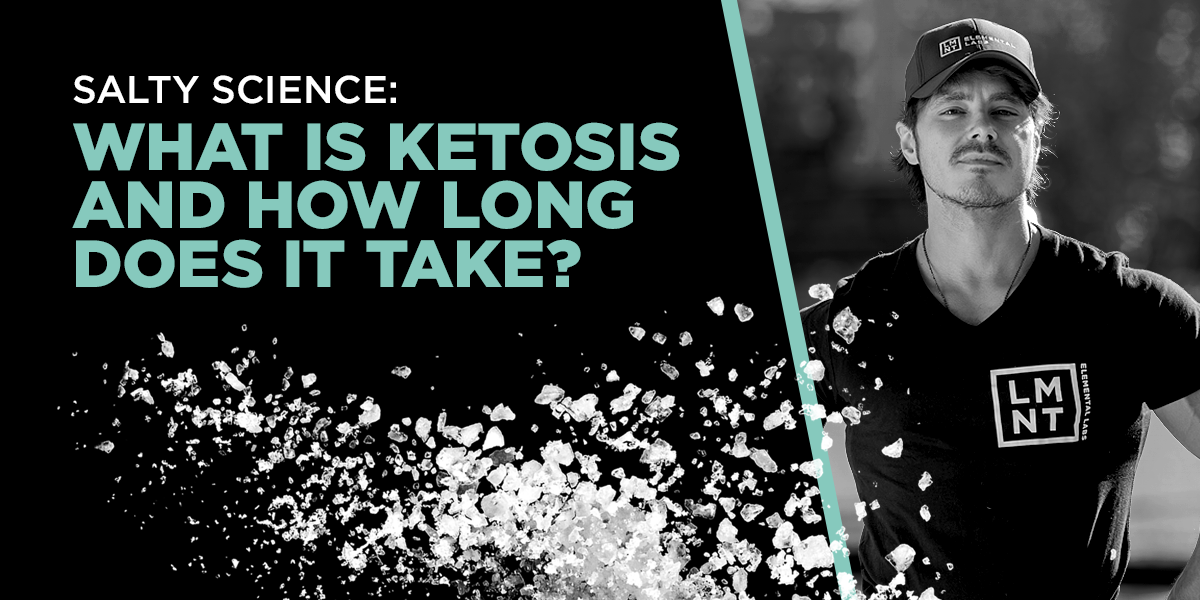 What is ketosis and how long does it take?

From the desk of
Luis Villaseñor
Science → What is ketosis and how long does it take?

How long does it take to enter ketosis? How do I get into ketosis faster?

I get this question all the time from new clients I coach. When people hear about the fat-burning benefits of the keto diet, they get excited. And I don’t blame them—it’s a metabolic shift that can revolutionize your health.

Eating a low-carb diet helps you stabilize your blood sugar so you experience fewer cravings. It keeps the hormone insulin low so you burn fat. And it supplies the brain with ketones, produced from the breakdown of fatty acids, that can improve cognition and reduce hunger (ketones have a hunger mitigation effect).

Maintaining a state of ketosis by limiting carbs can help you become a lean, mean fat-burning machine. It can improve your satiety to help you hit your desired caloric deficit comfortably, which makes losing fat easier.

But entering ketosis isn’t a race. It just happens naturally when you eat a well-formulated ketogenic diet.

And ketosis isn’t something to obsessively measure. Unless you’re using a keto diet to treat a specific medical condition, blood, breath, and urine ketone tests are more or less pointless.

More on that later. Today I’ll talk about ketosis, how long it takes to keto-adapt, and why ketone levels are less important than they’re made out to be. Then we’ll wrap with tips to smooth out your transition to eating keto. Sounds good? Let’s get started.

Ketosis is a metabolic state in which your body burns fat and produces molecules called ketones. Technically, this fat-burning state is defined by elevated ketones in the blood. The definition of Keto that I prefer is “any diet sufficiently low in carbohydrates, so as to make your body produce ketones.”

But the fat-burning piece is the key. Fat-adaptation is what drives the benefits of ketosis.

Eating a keto diet shifts your metabolism towards door number two. This fat-adaptation (or keto-adaptation) has many benefits, including:

So when you ask, “how do I get into ketosis?”, you’re really asking “how do I keto-adapt?” Let’s cover that now.

How To Enter Nutritional Ketosis

There are multiple ways to enter ketosis. These include:

What’s a reasonable carb limit? It varies by individual, but most people do best at 30 grams of net carbs per day or less. (Net carbs = total carbs – fiber – sugar alcohols/2).

Shoot for anywhere between 0.8 to 1.2 grams of protein per pound of lean body mass. For most people, this is upwards of 100 grams per day.

The rest of your calories will come from fat. If you’re looking to lose the most body fat on keto, your fat intake may be as low as 50 grams per day.

I know I have unconventional views on “high-fat” keto diets. I don’t believe in them.

Data from thousands of my clients suggests that high-protein keto diets are more effective for satiety, body composition, and overall well-being. Fat is just a lever to adjust your caloric intake.

How Long Does It Take To Enter Ketosis?

Different people will keto-adapt at different rates. For instance, a high-octane athlete may enter ketosis overnight even after consuming 150 to 200 grams of carbs the previous day.

That’s because athletes are more fat-adapted and insulin sensitive than sedentary people. By training hard and often, they regularly empty glycogen tanks and upregulate fat-burning machinery. Also, athletes usually have more lean mass (muscle) than the average person, and more muscle means bigger glycogen stores, which allows the person to be able to eat a bit more carbs.

Meanwhile, a low(ish)-carb person that rarely exercises might not burn much fat nor produce many ketones. Even 50 grams of carbs (about one cup of white rice) can push some folks over the edge.

Meal timing also matters. If you snack 24/7, you’ll never give insulin a break. But if you fast for most of the day, insulin will fall and—even if your feeding windows contain carbs—you’ll burn fat during that time. Here is something interesting: You burn more fat at rest when your insulin is low and you’re in a fasted state.

Your ability to fat-adapt also hinges on sleep, stress, age, body composition, cold exposure, and certain genes that govern fat metabolism. You can’t control your age or your genes, but you can certainly work towards better sleep and less stress.

Keto-adaptation is a natural result of eating a nutritious keto diet. As long as you keep carbs low, your body will handle the rest.

But it’s not a race. If you get your macros and your electrolytes right, you’ll be in a good position to fat-adapt with minimal side effects.

Because ketones are measurable in blood, breath, and urine, many people become obsessed with ketone levels. They make it their sole criterion for success. A lot of people fall for the idea that “more ketones equals more fat loss” but this is really not true.

Chasing ketones makes sense if you’re using a keto diet to manage epilepsy, cancer, Alzheimer’s, Parkinson’s, or another chronic condition. You want to hit a certain level of ketones in these situations.

But for the average person wanting to lose fat and feel better, chasing ketones is a waste of time.

Consider the fact that ketone levels often fall as someone becomes keto-adapted. (This likely occurs because more ketones are “burned” instead of floating around uselessly). What’s construed as a sign of failure is really a sign of progress!

Instead of chasing ketones, chase results. Chase the reasons you went keto in the first place.

Along with macros, calories, body measurements, weight, and exercise performance, you should be tracking subjective markers like energy, sleep, stress levels, appetite, and mood. If these areas are improving, you’re heading in the right direction.

And if they aren’t improving, read on for some actionable tips.

Entering ketosis isn’t complicated, but that doesn’t mean it’s easy. Some people have to overcome a lifetime of high-carb eating habits.

Habit change is a big topic, but it starts with a firm intention and an action plan. Here are some items to include in your keto action plan.

The old saying is true. What gets measured gets managed.

Measure your macros—your carbs, protein, and fat—using an app like Cronometer. If you don’t measure these at the outset, it’s like cooking a souffle without a recipe. It won’t turn out as you hoped.

You should also track your calorie intake. Not all calories are created equal, but it’s still very possible to overeat on keto. Overeating is the main reason people run into plateaus and stalls.

If you’re gaining weight overall and it’s not from body recomposition (muscle weighs more than fat), try reducing your energy intake by 10 to 20%. Take these calories from your fat allotment—protein is too important to sacrifice.

Inadequate sodium is especially ubiquitous on keto. This happens because:

For most cases of keto flu, the solution is to eat electrolyte-rich foods, salt your meals more aggressively, and take electrolytes with your fluids. We created LMNT to handle that last one for you.

Big dietary changes are hard. Because of this, it’s important to stay accountable.

Your accountability can be self-generated. Maybe you scribble your diet and exercise plan in a journal every day. When you write something down, you’re more likely to follow through.

Accountability can also come from friends, family, or community. Sharing your goals with others keeps you motivated to stay the course, and creates a warm and supportive environment in which people can share their keto journey, obstacles, and successes.

How’s your keto-adaptation going? Leave a comment or send me a message on my Instagram. It would be great to hear from you.