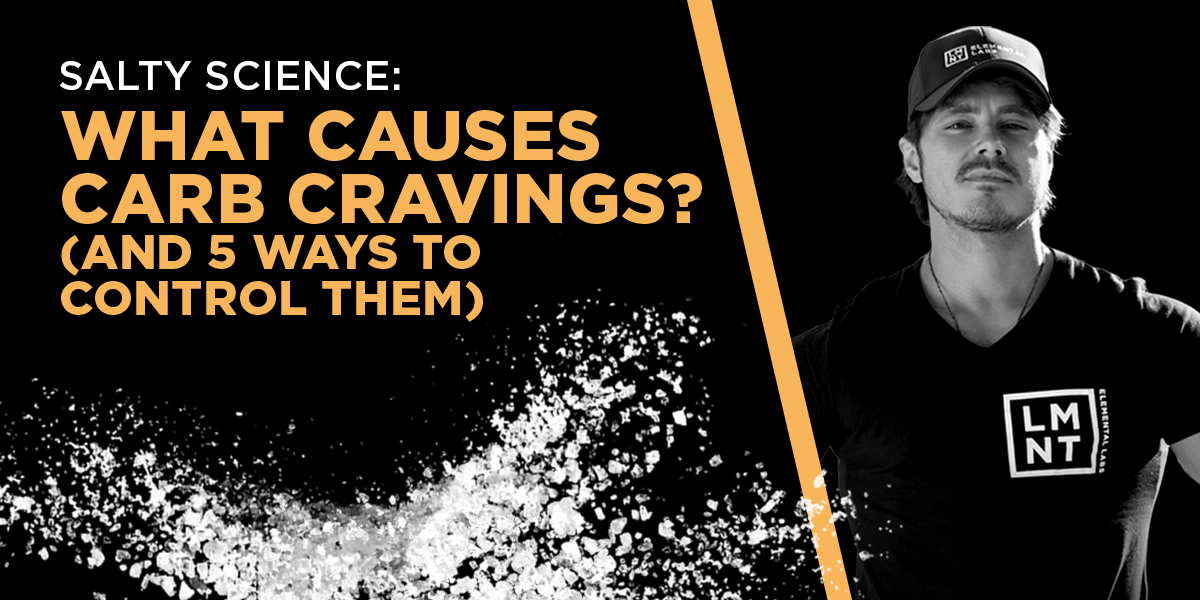 What causes carb cravings? (Plus 5 ways to control them)

From the desk of
Luis Villaseñor
Science → What causes carb cravings? (Plus 5 ways to control them)

Particularly for those with a history of overeating, it can take some time to adjust to a low-carb diet: to repair and improve glucose tolerance (the roller coaster of blood glucose spikes and troughs), to reduce hunger hormone signaling, and break the addiction to ultra-processed sugar-laden junk food.

Nonetheless, the mental piece of the game can happen instantaneously. Today I’d like to share best practices—both psychological and physiological—for controlling carb cravings. These strategies will help you avoid sugar, eat more whole foods, and stay healthy. First, though, let’s talk about what causes carb cravings in the first place.

Craving is rooted in both mind and body. Here’s what waters those roots.

If you’ve ever gone cold turkey on coffee before, you’ve experienced the power of caffeine addiction. Caffeine is a drug with addictive properties.

In a sense, sugar is like caffeine. It’s also a drug with addictive properties. However, we should be very cautious here. Many of the studies which have reported neurological addictions to sweet foods have used techniques like fMRI assessments, which have some real problems we can dissect another day.

“Sugar elicits addiction-like craving, and self-reported problem foods are rich in high-glycemic-index carbohydrates,” write the authors of a 2018 paper from the Journal of Clinical Chemistry.

Here’s how it works. When you eat sugar, your brain releases a bunch of dopamine, a reward chemical that makes you feel happy.

Your brain likes feeling happy. It wants that feeling again and again. It wants more dopamine, so you crave more sugar.

It can be a vicious cycle. This is, to be fair, more of an issue with refined carbohydrates. (I don’t know anyone who is addicted to plain baked potatoes or plain white rice.) In many cases, it is the hyper-palatable combination of salt, sugar, and fat which are amalgamated to elicit the greatest addictive response—the addiction grows stronger as we eat more.

Of all the macros, carbohydrates tend to raise blood sugar most substantially. The extent to which this occurs can be blunted by fiber content, the total amount of carbohydrate you consume, and the nature of the carbohydrate (simple versus complex carbs, for example).

Eating the types of foods I mentioned above can create a pleasurable rush in the moment, but when your blood sugar inevitably crests and then falls, the resulting hypoglycemia (low blood sugar) sends a powerful hunger signal. This is a definite issue in individuals who have blood glucose clearance issues (such as diabetics or insulin-resistant individuals).

To use an analogy: By eating a high-sugar, ultra-processed diet, you’re buying a ticket for the blood sugar roller coaster. The highs are high, but the lows are low. And when you’re low, you—and we—tend to crave sugary foods. Big time.

Later, I’ll explain how to hop off the coaster and buy a ticket for a better ride.

Hunger doesn’t happen by accident. Controlling this primal urge are two hormones—ghrelin and leptin—that regulate your appetite by binding to receptors deep within your brain. There are a number of others, but generally speaking, these are the largest movers and shakers in the hunger hormone world.

Ghrelin and leptin are opposites in terms of how they affect hunger. Ghrelin stimulates hunger, leptin mollifies hunger. Ghrelin encourages you to start eating, leptin helps you stop. Ghrelin can stall weight loss (because of this crazy thing called calories!), leptin facilitates it.

Ghrelin sounds like goblin. That’s how I remember ghrelin is the “bad” one, in terms of hunger and craving. My point is: Carb cravings often stem from dysregulations in these two hunger hormones.

Take leptin, for instance. High-carb diets can lead to leptin resistance (at least in rodent models), or the inability of leptin to promote fullness. As you can imagine, leptin-resistant folks could have serious problems with overeating if this is also true in humans. To be candid, I suspect that it is!

We’ll talk about managing leptin and ghrelin later. First I want to cover the mental aspect of craving.

If you have a giant bowl of cereal each night at 10 PM, your mind will habituate to that pattern. The closer the clock draws to 10, the stronger the cravings get. You could have eaten 2 hours before; it doesn’t matter. You’ll still get hungry.

This is called a conditioned hunger response, a phenomenon made famous by the Russian psychologist Ivan Pavlov back in the 1890’s. Pavlov found that he could stimulate hungry salivation in dogs by merely ringing a bell.

The trick was to ring the bell (the stimulus) every day before mealtime. This would train the dogs to associate the stimulus with food. Eventually, the stimulus alone (sans food) was enough to get the dogs salivating.

What stimuli might make you salivate? Maybe it’s the sight of ice cream in the freezer, the whiff of freshly baked cookies, or—to use the example from earlier—the clock hitting 10 PM.

If you’re not aware of this happening, it can lead to mindless eating. But if you’re aware of your conditioning, you can take steps to control it.

Now that you know what causes carb cravings, you’re in a good position to control them. This section will help you do just that.

The ketogenic diet is NOT the answer for everyone. I’ll go ahead and rip off that band-aid now. It isn’t. I don’t believe that chronic ketosis was the “diet of our ancestors.” I think that the data on that is inconclusive, by and large. I do know that for many, however, a ketogenic diet can be a powerful tool for improving their dietary choices and outcomes. The keto diet was central to my health transformation, along with many others’ close to me.

It reduced my cravings for sugary foods and helped many people I’ve coached lose as much as 300 pounds. Not only was a ketogenic diet what I needed nutritionally, but it helped me build an infrastructure and set rules for myself that helped me make healthier choices more consistently.

The ketogenic diet has the potential to shift your metabolism quite substantially. By consuming fewer carbohydrates, the body increases its capability for and—in a hypocaloric state—access to stored body fat. The roller coaster has fewer highs and fewer lows. More consistent blood glucose can lead to more consistent dietary choices.

The research has shown that this keto-adaptation process, however we describe it, leads to:

Keto isn’t the only diet compatible with hunger management. A whole-foods focused, Paleo-style approach with healthier choices of carbohydrates like sweet potato and fruit can work quite well, too—especially in the metabolically healthy individual.

But however you eat, it makes a great deal of sense to avoid refined sugar like you’d avoid a spooked wildebeest unless you live the kind of lifestyle to justify it. Even then, that likely comes at a longer-term cost. This means saying NO to sodas, cookies, sauces, crackers, dressings, and most anything else in a package.

These are the foods that may strengthen your addictive response. They can wire your brain to crave more refined carbohydrates. These are also the foods that keep you glued to the blood sugar roller coaster.

Getting off this ride by means of a low-carb, paleo, or ketogenic approach means increasing fats (and choosing more healthful options for fat sources) and decreasing junky carbs. Pretty soon, your body will adjust, and you’ll see a marked ability to resist cravings, or even its elimination.

Well, get this: When you don’t sleep enough, your ghrelin levels rise. Which explains the ravenous appetite that accompanies sleep-deprived days.

Short sleep drives cravings through other mechanisms too—some physical, others psychological. Impulse control, for instance, plummets in a sleep-deprived state, making it nearly impossible to avoid those gummy worms.

Don’t let sleep torpedo your diet. Guard your 8 to 10 hours in bed like a mother penguin guards her chicks.

Oscar Wilde once said, “The only way to get rid of temptation is to yield to it.” It’s a pithy quote, but it’s not a sustainable way to control food cravings.

If you yield to cravings for refined carbohydrates, they’ll only come back stronger. (Sugar can elicit an addiction-like response, remember?) This is likely due to longer-term effects on brain chemistry and due to programming as discussed earlier. Better to attack the problem at its source and remove the temptations entirely.

This means going through your kitchen and chucking any problem foods. (Most importantly: anything with refined sugar.) It also means not buying those foods in the first place. There’s an old adage that the mind won’t crave what the eyes can’t see. Even if that’s not true in your case, making the process of securing the food you’re jonesing for a substantially complicated or difficult journey is often a great technique for managing the craving.

Of course, you won’t be able to remove all temptations. Your waiter will bring out the dessert tray, and it will look damn delicious. But if your home life is largely temptation free, you should have enough willpower in reserve to skip the crème brûlée.

Food cravings aren’t subtle. They demand your attention. They beg to be satisfied. And it seems like they’ll never go away.

But this simply isn’t true. As anyone who practices meditation knows, everything that arises also passes away. Including hunger. It follows a natural ebb and flow. It peaks, dissipates, and levels out throughout the day—even when you don’t eat!

In fact, one group of researchers found a 36-hour fast and a 12-hour fast to affect ghrelin levels roughly equally. In other words, your hunger hormone stabilizes over time.

So if you get a crippling carb craving, hang in there. The intensity is bound to subside.

Okay, that was a lot of info. To recap, carb cravings are caused by:

And to manage your carb cravings…

Okay, that’s it, thanks for reading. I’d love to hear from you now. How do you control carb cravings? What’s worked and what hasn’t?