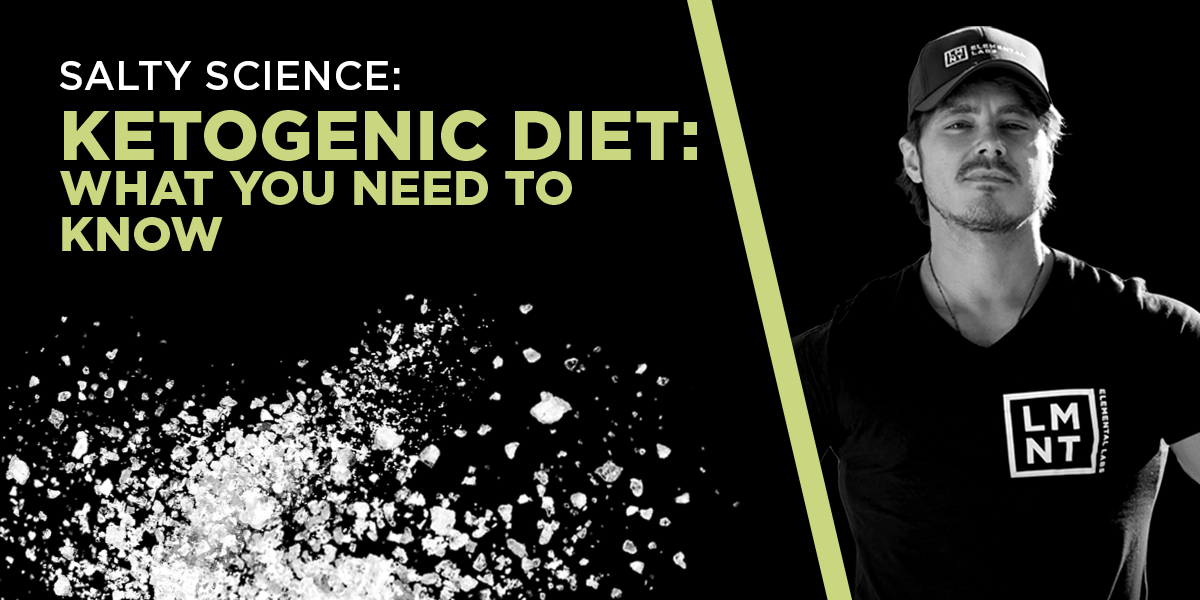 Ketogenic diet: What you need to know

From the desk of
Luis Villaseñor
Science → Ketogenic diet: What you need to know

The ketogenic diet’s first recognized use was in the 1920s for the treatment of childhood epilepsy. Fast-forward 100 years and keto has claimed the cover of every major nutrition magazine. Effortless weight loss, zero cravings, incredible sex—hyperbolic claims like these are good for getting eyeballs on a topic… not so much for intellectually weighing costs and benefits.

The ketogenic diet, as you may know, is named for a metabolic state called ketosis. In this state of glucose scarcity, fat fuels the body and ketones can fuel the brain as well as other organs. It was likely a common condition for our Hunter-Gatherer ancestors, but is almost never encountered by people following a modern, heavily processed, eat-every-3-hours diet.

Mentally, I seem to function at my sharpest in ketosis. And that makes sense, given how ketones improve cognition. But here’s the thing: not everyone benefits from a low-carb regimen. That’s why I tell my clients to chase results, not ketones. What’s the point of maintaining a certain “level” of ketosis if it’s not helping you achieve the goals you started with?

Too many people fixate on ketone levels like they’re competing for the high score on a bacon-flavored video game. They talk about “cheat days” as if they were married to their macronutrient ratio. My advice? Treat your diet like an experiment. It’s a modifiable means to fuel, flavor, and fitness.

With this in mind, today’s article is an introduction to the keto diet—what it is, what it’s effective for, and some tips on implementation. Wherever you are on your health journey, whatever your goals, this guide will give you another powerful tool to consider. I hope you find this info useful.

What Is The Keto Diet?

The ketogenic diet is a high-fat, low-carb eating program. Roughly speaking, when you go keto, about 60% of your calories come from fat, 30% from protein, and 10% or less from carbs. Admittedly, however, the toggle of calories that come from fat is variable and should be determined by your goals, so these percentages are completely related to the total calorie intake that you need for that purpose. They are not fixed.

Strict adherence to a rough guideline with macros percentages or ratios is a great way to botch a ketogenic diet the way most people need it: For improved body composition and health. The ratio approach is used most effectively for a medically supervised KD, one that is designed specifically to deal with medical issues such as epilepsy. Modified versions of the KD can be higher protein and carb, and tend to be both easier to do and perhaps more nutrient dense. Keeping macronutrients at a range (both in composition and amount) where insulin and blood glucose are well-managed signals your body to utilize more fat and make ketones. Here’s how that works:

Simply put, a ketogenic diet allows your body to increase its reliance on fat (and the ketones produced from fat) for energy and to reduce its dependence on glucose. Fasting, by the way, functions in the same way, which is why keto is called a “fasting mimicking diet”.

Keto done with a focus on nutrient denisity is basically paleo without the healthy carbohydrates. You can eat meat, fats, nuts, leafy greens, small portions of berries, and dairy if tolerated. Avoid high-carb foods like rice, sweet potatoes, grains, and honey.

Keto has become a popular weight loss diet, but ketosis has other benefits too. Let’s explore these now.

Like I said earlier, I view the keto diet mainly as a tool, although some expand that into a lifestyle they maintain indefinitely.

Although a spectrum of efficacy exists for the appetite modifying effects of various diet approaches, low-carb diets trigger unique hormonal changes that significantly limit overeating (at least in some folks). Plus, ketones themselves have some unique therapeutic benefits.

Here are the best reasons to consider a ketogenic diet:

Keto isn’t a magic weight loss diet. Many other approaches, including paleo, work too. A few mechanisms, however, make the keto diet uniquely suited for this purpose.

First, insulin. Insulin is a signaling hormone responsible for a number of functions in the human body – among them the retention by tissues of stored energy (fats and carbohydrates, predominantly) and to indicate a need for the storage of energy in circulation. Keto because of the composition of the calories, keeps a fairly heavy boot on circulating insulin levels. All that said, maintain some perspective: Insulin is not inherently bad…too much, too often (overeating) is problematic. Although insulin is a player in this story some present it as THE singular factor when it is (at best) simply one factor in what is a dizzyingly complex subject.

Then there are the hunger hormones. A keto diet, it’s been shown, lowers ghrelin and neuropeptide Y—both appetite stimulators. Less hunger, less overeating, less weight gain. To the degree insulin is a player in all this I suspect it relates to the hangry state that often occurs after a very large, potentially carb-rich meal. Again, not everyone responds poorly to large amounts of carbs, but a lot of folks would do well to reduce their carb intake, particularly the refined variety.

A real-world example will help illustrate how low carb may facilitate fat loss: In one randomized controlled trial, healthy women on keto lost more weight than women on a calorie-restricted low-fat diet. Let that sink in for a moment. The keto women ate all the calories they liked, and they still lost more weight than calorie-restricted controls. This story likely is a combination of less variation in insulin and thus blood glucose coupled to the satiating nature of protein and fat in combination. I’m not convinced this will be the story for everyone, just as no singular diet is the “best diet” for all, but if you have struggled to lose weight in the past and have not tinkered with some degree of carb restriction, it might prove to be remarkably effective.

When you eat a standard Western or American diet (even if the diet is high quality in nature), your brain sucks up about 120 grams of glucose per day. But in ketosis, your brain uses much less glucose (about 30-50 grams), instead relying more on ketones for fuel.

Limiting the brain’s requirement for glucose can be a very good thing. In one study, for instance, people saw declines in mental performance (compared to placebo) after drinking a glucose solution. Glucose literally made them temporarily less cognitively aware.

Ketones seem to have the opposite effect. Probably the best evidence comes from a study on elderly folks taking MCT oil—an especially ketogenic fat. When blood ketones went up, working memory, attention, and task switching performance went up too. (In fairness, there is at least one study I am aware of which shows no such cognitive improvement)

What’s going on here? As we age, our brains get worse at using glucose, but still use ketones like champs. Ketones are like special chow for the older brain—enhancing mitochondrial function and improving cognition. Because of this, researchers are studying ketosis as a therapy for Alzheimer’s disease.

A low-grade immune response—the dreaded “chronic inflammation”—underlies most degenerative disease. If you want to live a long and healthy life, you need to get inflammation in check. It is important, however, to note tht some inflammatory processes at punctuated times are advantageous! An example of this is the inflammation which exists post-training or with regard to injury recovery.

#4: Keto For Other Conditions

Along with improving weight loss, cognition, and inflammation, a keto diet may also:

Who Should Be Careful With Keto?

I believe most people should experiment with keto, but it won’t work for everyone. Here are some groups that should consider skipping, or at least adjusting, their ketogenic diet.

High-motor activities like Jiu-Jitsu, CrossFit and obstacle course racing may benefit from carb intake well above what is generally recommended for keto. With the added physical activity, you may still be producing ketones despite a greater carb intake. This is where following specific percentage recommendations can lead to problems.

Keto for a desk-bound programmer really does mean low carb. Keto in the context of a high-motor athlete can mean upwards of 200 grams of carbs per day depending on activity, size, intensity, and more. This is especially true if those carbohydrates come from nutrient-dense, high-fiber sources. Check out this article on net carbs and you’ll see what I mean.

In my coaching career, I have seen and coached many high-intensity athletes who have reported success with high-intensity, fat-fueled exercise. At least one study suggests that keto is compatible with sprinting and weight lifting performance. However, it bears noting that I’m not dogmatic about carbohydrate intake. If your performance, recovery, and mental health need the additional carbs, suffering through deprivation won’t help you much.

In a subset of people, a keto diet causes cholesterol levels (in particular, LDL-particle number) to shoot up. My friends in lipidology are concerned this increases heart disease risk. And if they’re concerned, I’m concerned.

But since other risk factors like inflammation, blood glucose, and body comp often improve on keto, it’s unclear how much risk the high LDL-P, in isolation, confers. If you’re one of these “hyper-responders”, my advice is to tinker with the following:

Okay to eat keto with a baby on board? Another gray area. The answer is: it depends. Lilly Nichols, RD has used low-carb diets in hundreds of women struggling with gestational diabetes and a host of other issues. Some may be overtly in ketosis while others are just carb-restricted, but it is a safe and viable option depending on the person! Again, dogmatism and rigid adherence can be dangerous. A huge spectrum exists between keto and low-to-moderate carb intake. Even if lowering your carb intake turned out to be a good thing for you, more of a good thing is not inherently better. Monitor how you feel and adjust accordingly, always.

#4: Those with gut issues

I couldn’t decide where to stick “gut health” in this article. Depending on your situation, keto can either help or harm your gut.

For instance, keto can alleviate small intestinal bacterial overgrowth (SIBO) by starving bad bacteria in your small intestine. Dr. Michael Ruscio wrote about this in his book, Healthy Gut, Healthy You.

There has been some concern that limiting fermentable carbs can also degrade the gut barrier. That’s because, when gut bacteria have no fermentable carbs to eat, they eat the protective mucus lining in your gut instead, or so the theory goes. Five or ten years ago I was more concerned about this. Given how well folks have done on very low carb diets, even some carbohydrate-free diets (looking at you, carnivores!) … I think this concern may be either misplaced or may reflect certain individual predilections.

The keto diet isn’t a cure-all, but it’s also not a meaningless fad. It’s somewhere in-between—a useful tool for weight loss, cognition, and several other indications.

If you want to start a keto diet, you probably have lots of questions:

I hope the resources above serve as a solid starting point for you!