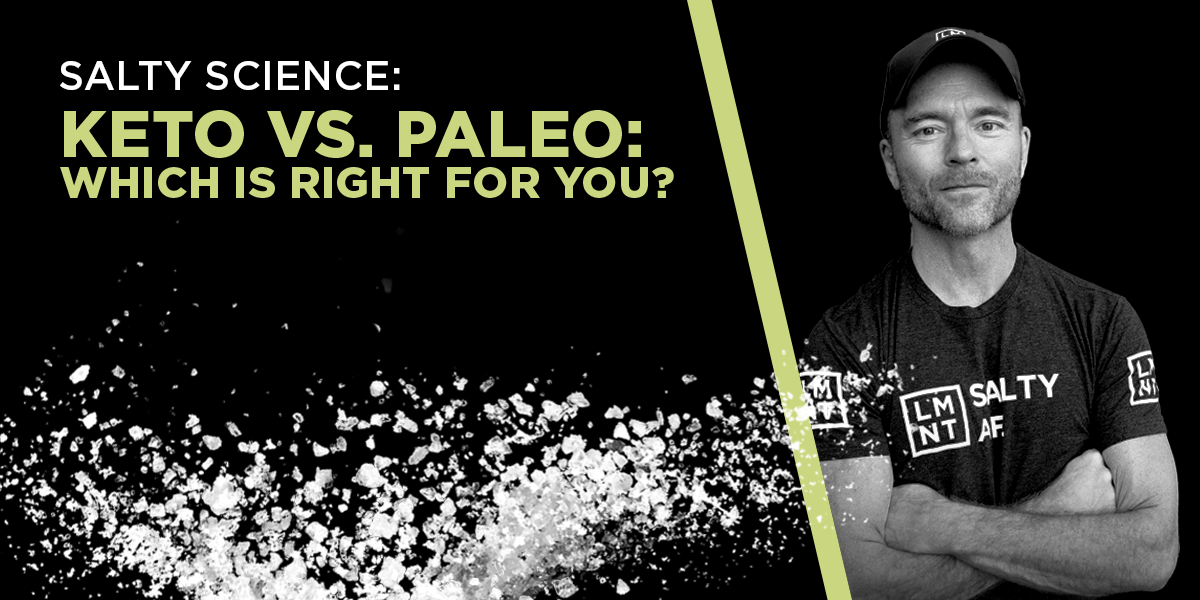 Keto vs. Paleo: Differences, similarities, and which is right for you

From the desk of
Robb Wolf
Science → Keto vs. Paleo: Differences, similarities, and which is right for you

For several years running, U.S. News and World Report has ranked the Paleo diet and the keto diet near the bottom of their “Best Diets” list. In 2021, Paleo received 2.3 out of 5 possible points, while keto received a pathetic 1.9.

The Slimfast diet—a diet of proprietary bars and shakes—outranked them both, garnering 2.8 points. How much scientific research supports the Slimfast diet? That’s easy. Zero.

These rankings get me going, I’ll admit it. I mean, c’mon people, are you really saying that drinking protein shakes is better than eating an anti-inflammatory whole foods diet? Are you really ignoring all the scientific evidence in favor of both Paleo and ketogenic diets?

I’m not a Paleo or keto zealot. Neither diet is for everyone. There is no one-size-fits-all solution for diet and lifestyle. But in my many years as a health educator, I’ve seen both be game-changing for people well-suited to these approaches.

A lot of this stuff is common sense. Obviously, avoiding sugar and processed food is good for you. Both Paleo and keto (at least the keto I recommend) are strong on that point. They replace empty calories with nutrient-dense plants and animals.

These diets are more alike than different, and often they overlap. But they’re not identical twins. They don’t have the same guidelines around carbs, for instance.

I’m writing this article to cover it all. I’ll review the basics of keto and Paleo, how they’re alike, how they differ, and how to think about which diet makes sense for you. Stick around. I think you’ll learn something useful.

What Is the Paleo Diet?

There are two way to define the Paleo diet:

When I say ancestors, I’m not talking about your great uncle Wilfred. I’m talking about early homosapiens—hominids that roamed the planet tens of thousands of years ago.

These hunter gatherers lived off the land, and according to archaeologists studying their remains, they did so in excellent health, largely free of the diseases of modernity. This observation is bolstered by anthropological evidence on modern day hunter gatherer societies. They don’t get sick like we do.

I think of Paleo as an anti-inflammatory diet. It minimizes foods known to cause unnecessary immune activity. It’s also an “evolutionary diet” in that it promotes foods that humans evolved to eat.

What Is The Keto Diet?

The Keto diet (or ketogenic diet) is a very low-carb diet designed to promote a metabolic state called ketosis. In this unique state, the body runs primarily on fat and ketones for energy.

I say “unique” because, in today’s chronically overfed society, most people aren’t using body fat for energy. Rather, most metabolic needs are met by carbohydrates.

When carbs are available, your body uses them. Your brain, in particular, is like a glucose vacuum.

But in ancient times, carbs weren’t always available. Our ancestors often went weeks or months without them. Fortunately, we have a backup energy system: Ketosis.

Ketosis is triggered by a highly reduced carb intake. Less carbs cause blood sugar and insulin levels to drop, signaling the breakdown and release of fatty acids from stored fat tissue. Fatty acids are then burned in the liver to produce energy and ketones. That’s ketosis.

Ketones are useful little molecules. They cross the blood-brain barrier, fueling your brain when carbs are scarce. Fatty acids can’t do that.

I think of ketosis as a tool. Most folks don’t need to be there all the time. Cycle in for some benefits, and cycle out when you’re ready.

Paleo vs. Keto: How Are They Similar?

The Standard American Diet is a smorgasbord of refined sugar, vegetable oils, and other processed junk. It’s making our species obese, metabolically unwell, and lethargic.

Of course I’m not the only one, but I’ve spent nearly 20 years sounding this alarm. Thankfully, a group of highly intelligent people (like you) have given me their ears.

I like Paleo and keto because they both say NO to refined foods. The focus is instead on meat, fish, nuts, and vegetables. Whole foods, baby!

This is pretty obvious with the Paleo diet. Hunter gatherers didn’t eat cereal, warm up Hot Pockets, or get drunk and polish off a tub of Ben and Jerry’s. (Though they would have, if given the chance).

Eating a keto diet, however, technically only means eating a diet that’s low in carbs. The fats and proteins that comprise your daily calories aren’t always specified.

The term “dirty keto” describes a version of keto high in vegetable oils and full of processed low-carb foods. A dirty keto diet might put you in ketosis, but it won’t help you age like a fine wine.

That’s why I suggest taking a Paleo-ish approach to keto. Keep the foods real, and your body will keep things real, too.

Beyond whole foods, the other main comparison involves carbs. Keto is very low-carb by design, but Paleo tends to be low-carb too. That’s what happens when you cut out grains, legumes, and added sugar.

Paleo vs. Keto: How Are They Different?

In my view, there are three main places where Paleo and keto differ.

The main rule of the keto diet is to limit carbs. (Usually to 20-30 grams net carbs per day, though this depends on a host of factors including size and activity level). Limiting carbs triggers a cascade of metabolic biochemistry that ends with your liver burning fat and producing ketones. Then you can tell all your friends you’re in ketosis.

Though the Paleo diet is often low in carbs, it’s not necessarily a low-carb diet. If you’re consuming 200-300 grams of carbs through potatoes, sweet potatoes, and other Paleo-friendly tubers—you aren’t low-carb.

Many people thrive in the middle, at about 75-150 grams of carbs per day. I give you the tools to set a personalized carbs strategy in my book, Wired To Eat.

Dairy creates more controversy in the Paleo community than an episode of South Park in a daycare center. Confused Paleo purists believe that, since our ancestors didn’t drink animal milk, we shouldn’t either.

This is a flimsy argument. If we discovered a compound that improved every relevant biomarker with no side effects, would we avoid it because cavemen didn’t consume it? Obviously not.

Sadly, dairy is not this magical compound. For starters, it tends to give many folks digestive trouble. A lot of this is probably mediated by gut-specific inflammation, along with run-of-the-mill lactose intolerance. There’s a lot to not like.

Still, if tolerated, dairy is compatible with both a ketogenic and an evolutionary lifestyle. But if you’re having gut issues, take a break from dairy products and see if it helps. Also worth mentioning: Not all dairy is the same. Some who find they do not handle bovine (cow) dairy, may do fine with sheep, goat or camel! If you like dairy, but dairy does not like you, experiment.

Paleo restricts grains, sugar, and legumes—but at least you can still have fruit and starchy tubers. On a keto diet, you need to limit ALL carbs. Not always easy.

This interdiction on carbs creates a number of compliance issues.

Some of these snags—like dining out difficulties—also apply to Paleo. But in general, a Paleo template is easier to start and stick with.

Which Diet Should You Try?

If you’ve been following my work for a while, you know I’m a big believer in personalized nutrition. What works for one friend (or one breathless influencer) might not work for you.

You might not feel your best on a low-carb diet. Even if you dial in your electrolytes, track your macros, and eat the finest of whole foods—keto may simply fail you.

Paleo is less likely to fail you. There’s a lot more flexibility. You can tinker with carbs to suit your individual needs, and there’s no downside to cutting out the modern Frankenfoods terrorizing Western society.

So I would consider starting with a moderate-carb Paleo template, then cycling into a whole foods keto diet if you need a sharper tool.

There are several applications where keto really shines. The first, and most publicized, is weight loss. Paleo can help with weight loss too, but very low-carb diets might even be better. Although not the case for everyone, keto seems to produce a disproportionately strong appetite control. For the folks that keto really works for, hunger is far less of a problem vs. other ways of eating.

Keto’s weight loss benefit goes hand-in-hand with its (relatively recent) history of helping to reverse type 2 diabetes. For metabolic syndrome, cutting carbs is perhaps the best medicine we have.

Researchers have also been exploring the ketogenic diet as a potential therapy for both Alzheimer’s and Parkinson’s diseases. So ketosis is also brain medicine.

Paleo or keto, it’s up to you. I wrote this article to inform your thought process, not to choose for you.

You’re also welcome to heed the rankings of U.S News and World Report and stock up on Slimfast. Joking, joking of course! I don’t think the Slimfast diet even approximates a healthy diet, but at least you’ll make the shareholders happy.