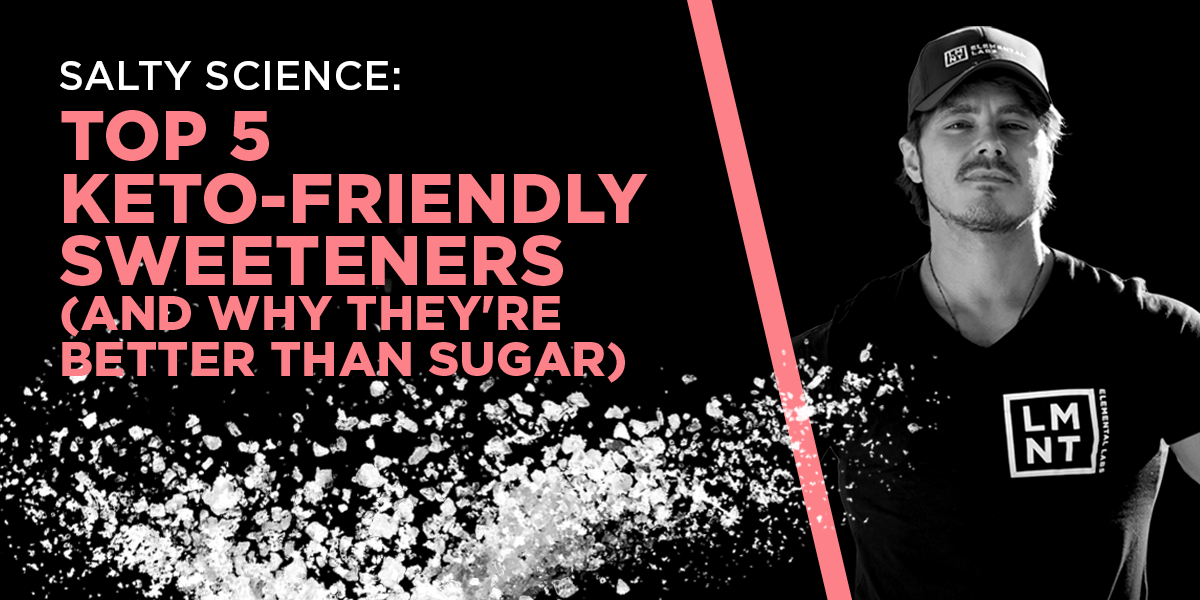 Limiting carb intake to a very small percentage of your caloric intake amid a caloric deficit leads to a state of increased fat burning: ketosis. Sugar, being a high-glycemic carbohydrate, decreases or even blunts ketosis. So when you eat a keto diet, you give up sugar for the most part.

But going keto doesn’t mean you have to give up sweet tastes entirely. A handful of sweeteners are perfectly compatible with low-carb living, and offer great sugar alternatives even for folks not eating low-carb.

And ketosis is just one potential pro of replacing sugar with a healthy alternative. Many keto sweeteners have antioxidant benefits, anti-inflammatory benefits, blood vessel benefits, and more.

Still, I’d emphasize that most of the benefits aren’t from the keto-friendly sweeteners. They’re from the avoidance of what they replace: sugar. At the end of the day, excess sugar is making us sick.

I’ll dig into sugar alternatives in a minute. First, let’s talk about why sugar is so unhealthy.

How Added Sugar Is Making Us Sick

When you see the term “added sugar”, it usually refers to either sucrose (table sugar) or high fructose corn syrup. Both are combinations of the simple sugars glucose and fructose.

The average American consumes about 17% of their calories from added sugar. If you want a disturbing visual image, that’s about 20 teaspoons per day.

Most of this sugar hit comes from sugar-sweetened beverages. These beverages—sodas, fruit juices, and sports drinks—are a key driver of the American obesity epidemic.

Sugary beverages not only pile on empty calories, but, when consumed in excess, they contribute to the metabolic dysregulation (high blood sugar, high insulin, and insulin resistance) that plagues millions. In one study on over 90,000 women, consuming 1 or more sugary drinks per day (vs. 1 or less per month) was linked to an 83% higher risk of developing type 2 diabetes.

Consider also that higher sugar intakes have been linked to:

And so a key principle of healthy eating is to avoid added sugar. This is true of any whole foods diet, including the Paleo diet. But it’s especially true of strict low-carb diets.

Sugar and the Keto Diet

A ketogenic diet is, by definition, low in sugar. Keto is a very low-carbohydrate diet. Sugar is a carbohydrate. It makes sense.

When you consume sugar, it slams the door on ketosis. At the broad level, here’s how that works:

So sugar isn’t the kryptonite of keto because it tastes sweet—it’s because eating or drinking it increases blood sugar and insulin levels.

And compared to many other carbohydrates, sugar has a high glycemic index. In other words, consuming table sugar causes blood sugar (and subsequently insulin) to rise relatively quickly vs. other carbs.

That’s because table sugar is a simple carbohydrate. Other carbohydrates (like fiber and sugar alcohols) have smaller glycemic impacts, and are therefore more keto-friendly.

What About Artificial Sweeteners?

Artificial sweeteners like sucralose, aspartame, and saccharin are made in the lab. They don’t originate from plant or animal sources like sucrose, stevia, and other natural sweeteners.

Artificial sweeteners contain zero calories, so their impact on blood sugar and insulin levels is negligible. Which means that they won’t meaningfully interfere with ketosis.

Even so, I’m wary of recommending these compounds. And it’s not because of the oft-cited, assumed cancer risk. Yes, animals pumped full of aspartame develop tumors. But there’s little evidence that human doses cause cancer in people.

There is some evidence linking increased diet soda consumption to metabolic disease. Daily consumption (vs. non-consumption) was correlated with a 67% higher risk of type 2 diabetes in several thousand adults. To be clear, this is 67% relatively higher risk in consumers vs. non-consumers, not an increase to the baseline. Still, I have my reservations about that data. It isn’t incredibly well-controlled, and may likely come down to nothing more than increased food intake from justifying the use of diet soda.

They also have health benefits worth mentioning. Let’s dive in.

Stevia is a zero-calorie natural sweetener that’s 200-300 times sweeter than sugar. Suffice it to say that a little goes a long way.

Stevia is very safe for consumption. First, stevia extract is generally recognized as safe (GRAS) by the FDA. That’s a decent start, but a certain level of skepticism is healthy when it comes to FDA recommendations. I’d do well to mention here that the stevia plant as a whole (rather than JUST the extract commonly used in food products) has not achieved GRAS status yet. There’s much interest in its value as a sweetener in extract form than in plant form, and the plant is of poorer quality/purity. That being said, I believe GRAS status is likely coming soon for stevia rebaudiana.

Digging further, steviol glycosides have been used for hundreds of years in South America, mostly to treat diabetes.

Lastly, to reach stevia’s acceptable daily intake (ADI), a 150-pound person would need to consume 40 tabletop packets of stevia per day. I don’t personally know anyone that loves stevia THAT much.

In case you were wondering, we chose stevia to sweeten LMNT. It’s safe, tasty, and doesn’t interfere with low-carb goals. Plus, stevia farming is WAY better for the environment than sugar farming. Taste-bud win, low-carb win, and environmental win.

Also known as luo han guo, monk fruit is a gourd-like plant with a long history of treating fever, hot flashes, and other heat-related maladies in China. Along with this history of traditional use, monk fruit has also received GRAS status from the FDA.

Remember the steviol glycosides that power stevia? Well, monk fruit is powered by compounds called mogrosides. One called mogroside V is a strong antioxidant, according to test tube research.

Monk fruit is definitely keto-approved. In one study, healthy people who consumed monk fruit did not experience a subsequent blood sugar increase. What happened when they consumed sucrose? A 70% increase in 15 minutes.

If you’re looking for a keto-friendly sugar substitute that tastes and bakes like sugar, you should give allulose a try. It’s 70% as sweet as sugar, doesn’t raise blood glucose, and has received GRAS status from the FDA.

And unlike other keto sweeteners, allulose browns. That opens up the recipe book a bit.

Allulose doesn’t raise blood sugar because about 90% of it gets absorbed through the small intestine and excreted intact through urine. It’s technically a carbohydrate, but it’s not digested through normal routes.

Because of this, the FDA decreed in 2019 that allulose no longer be listed as “added sugar” on the ingredient label. It has vastly different metabolic effects.

In rats, for instance, 1 gram of allulose (also called d-psicose) contributed “effectively zero” energy. And a meta-analysis of human studies found that consuming allulose along with carbs reduced blood sugar levels by an average of 10%. This blood-sugar-lowering effect likely explains why allulose has also been shown (in one small study) to increase fat-burning.

The takeaway? On keto, enjoy allulose at your pleasure.

Soluble corn fiber isn’t something you put in your coffee, but it is ubiquitous in low-carb treats. So what is it?

First things first: Soluble corn fiber IS NOT the same as corn. Corn contains starch (and other crap like phytic acid) that’s not keto or Paleo friendly.

Soluble corn fiber is derived from corn. It’s a type of prebiotic fiber. Prebiotic fibers are not digested directly and converted into glucose for energy, but they can serve as “food” for colonic bacteria. Not only does SCF increase levels of beneficial bifidobacteria in the gut, but it’s also been shown to increase calcium absorption in adolescent females.

Still, I’d caution against the use of SCF for diabetics. While theoretically there is no calorie impact, it’s possible that SCF displaces glucose, leaving more to build up in circulation. We need more data on this, but if it is true, diabetics’ insulin-compromised status would make them the most ready targets.

But for those on a ketogenic diet, you should be eating mostly meats, fish, eggs, and non-starchy veggies. In other words, whole foods that have a lesser effect on blood glucose and therefore a lesser BG impact when displaced.

In summary: If you’re not diabetic, SCF’s benefits to your gut health are worth considering when browsing various alternatives to sugar. Whenever possible, look for products with non-GMO soluble corn fiber. Non-GMO products are less likely to be contaminated with pesticides and herbicides.

Erythritol is hard to say and spell, but don’t let that scare you away. It’s earned its seat at the keto sweetener table.

A little background. Erythritol belongs to a class of indigestible carbohydrates called sugar alcohols that (mostly) pass intact through the small intestine and are excreted through urine. Like the other sweeteners on this list, erythritol doesn’t raise blood sugar or insulin levels—making it ideal for low-carb and keto diets.

If you’re going to use a sugar alcohol for sweetening, it makes sense to choose erythritol. Compared to other sugar alcohols like xylitol, mannitol, and sorbitol, erythritol has fewer calories and fewer reported digestive problems.

Erythritol also exerts antioxidant effects that may improve heart health. In one small pilot study, type 2 diabetics who received 36 grams of erythritol every day for one month had improvements in small vessel function and reductions in aortic stiffness.

All the above sweeteners are acceptable on keto. Your selection will depend on taste, texture, availability, cost, and perhaps a few other variables.

Having trouble deciding? You can always run a little experiment. Cycle through each sweetener, taking note of how it tastes and how it makes you feel. That should give you all the data you need to make an informed decision.

With the right low-carb sweetener, satisfying your sweet tooth on keto is a breeze. Enjoy!