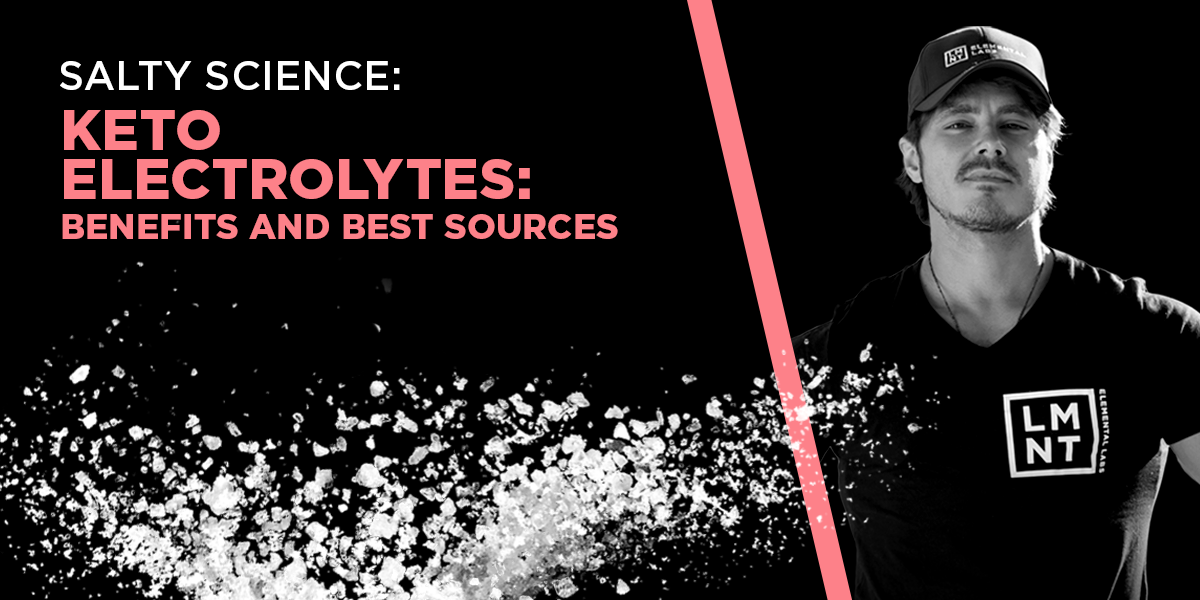 From the desk of
Luis Villaseñor
Science → Keto electrolytes: Benefits and best sources

I’ve spent over a decade coaching people to use the ketogenic diet as a tool to achieve their body recomposition goals. If I had to condense my career into just 30 seconds of advice, I would spend at least 5 seconds on electrolytes.

Ignoring electrolytes is probably the biggest mistake people make on a low-carb or low-processed-food diet. Few people understand the importance of sodium, potassium, and magnesium. Headaches, fatigue, cramps, and other symptoms of keto flu often follow when we don’t get enough of these vital minerals—especially sodium—and as a result, people stagger around in a low-energy, cranky fuzz… like a grizzly disturbed during hibernation.

The truth is, those who eat a ketogenic, paleo, or low-carb diet simply need more sodium than the general population. Why? A number of factors contribute, but some interesting facets of low-carb and keto physiology add a new layer to the problem of electrolyte deficiencies.

It’s the perfect salt storm. And unless they fix their electrolyte deficiencies or imbalances, these folks don’t tend to stick with keto for long. I don’t blame them! Most people adopt a low-carb or keto diet to look, feel, and perform better, not to feel like they’re wading through the gravity of Jupiter. At this point people usually ask me “If this (keto or paleo) diet is so healthy, why would you need to supplement electrolytes?”

My answer? Just as humans have always prioritized water and food, they have also actively sought out salt deposits. It’s one reason why big civilizations have found success around rivers and salt deposits, and thrived in salt trade. It was so valuable, in fact, that Roman soldiers were sometimes paid with salt instead of money. The word for their monthly allowance, “salarium,” even persists today in the English word “salary.”

So today I’ll share what you need to know about electrolytes on keto. Which electrolytes should you target? What are their benefits? And how can you optimize your electrolyte intake? I’ll answer these questions soon. First, let’s review some basics.

Do you know how your nerve impulses fire, muscles contract, and heart beats? These actions (and many others) depend in large part upon electrolytes: minerals that carry electrical charges. In your body, this electricity helps cells communicate with each other.

Allow me to introduce you to the sodium-potassium pump: a protein found in every living cell in your body. This workhorse pumps sodium and potassium ions in and out of the cell, creating electrical events called “action potentials.” These action potentials then travel from cell to cell until they reach our muscle fibers. Once they do, calcium ions engage the muscle fiber, producing a contraction.

Why am I telling you all of this? Because a lack of electrolytes can make this process less efficient, weakening your muscle contractions. Electrolytes literally prime the machinery that keeps you thinking, breathing, and moving.

But it’s not just about action potentials and sodium-potassium pumps. Sodium and potassium also mediate fluid balance. In other words, they help maintain optimal fluid levels in your blood, brain, skin, and organs. This is why electrolytes are crucial for hydration. Hydration isn’t just about drinking water. It’s also about getting enough electrolytes.

Neglecting electrolytes disrupts fluid balance. You see this A LOT in marathon runners who drink plain water on a predetermined schedule, develop hyponatremia (low blood sodium levels), and lurch across the finish line (or don’t) in a fog. It’s sad because exercise-associated hyponatremia is easily preventable.

Along with sodium and potassium, magnesium, calcium, chloride, phosphorus, and bicarbonate also conduct electricity in the human body. Not all electrolytes, however, need to be consciously prioritized. More on that later.

There are three main reasons why low-carbers need more electrolytes:

Let’s take these one at a time.

When people switch to keto, they often replace refined foods with whole foods as a result of being more conscious of their health decisions. That’s not to say that everyone does. Some eat what’s called “dirty keto” to receive the short-term benefits of eating keto, but it’s at the cost of their long-term health.

In any case, the switch from processed to whole foods is great because whole foods are more satiating and nutrient-dense than processed garbage.

Yet, cutting out refined foods comes with an unintended consequence: it removes the primary source of dietary sodium. (Processed foods tend to be salty foods.) If this sodium isn’t replaced, you’re likely looking at a sodium deficiency.

This is perhaps the biggest contributor, and definitely the most overlooked. When you restrict carbs, it keeps the hormone insulin low. Low levels of insulin then facilitate the fat-burning state called ketosis.

Low insulin has other effects though, like increasing urinary sodium excretion. This has long been noticed in fasting patients who rapidly expel sodium via the “natriuresis of fasting.”

Similar sodium excretion occurs on the keto diet. Sodium should be bumped up accordingly to account for those losses.

The US government has waged war on salt since 1980. Today, it urges the public to cap sodium intake at 2.3 grams per day.

I guess they haven’t noticed the science suggesting that 4–6 grams daily is the sweet spot for heart health outcomes. (And in high-risk patients, no less!) Meanwhile, anti-salt propaganda continues to frighten people into hiding the salt shaker.

Keto flu is a nickname for the fatigue, headaches, and cramps people may experience when cutting carbs. There are several causes of keto flu, with the most common being low sodium.

If you compare low sodium symptoms to keto flu symptoms, you’ll find plenty of overlap. This isn’t a coincidence. The consequence of inadequate salt is keto flu, and eating a ketogenic diet is a contributing factor to sodium deficiency.

The standard advice for keto flu? Wait it out while your body fat-adapts. This may be okay for a period of days, but what if you’ve been in keto hell for weeks or months? Something else is wrong, and it needs to be addressed.

There’s no downside to starting with electrolytes. Get your electrolytes in check with the salt shaker, nutrient-dense whole foods, and some LMNT. That often solves the problem, right then and there.

Each of these minerals has a unique profile. Let’s dive into them.

If you want to understand the benefits of sodium, try noticing what happens when you don’t get enough of it. Or save yourself the headache and read this list of the consequences:

Our sodium retention system causes many of these problems. When you don’t get enough salt, you release aldosterone, epinephrine, renin, and other stimulating and blood-pressure-elevating hormones in an attempt to spare your body the loss of sodium.

Inadequate electrolyte intake also impairs bone health. Why? Because bone is your primary electrolyte reservoir. If dietary intakes are low, bone gets tapped.

If you want to get enough sodium, make friends with the salt shaker and drink electrolyte water. As I mentioned above, I recommend getting at least 4–6 g of sodium per day. More if you’re sweaty and active.

It’s important to note that, while “sodium” is often used as a synonym for salt, they are not the same. Salt, in the form that we typically consume, is sodium chloride plus small amounts of other minerals. By weight, 1 gram of salt is about 40% sodium. This lesser known fact is one big reason that people don’t get enough sodium. People think they’re consuming more than they actually are.

Ideally, we should be consuming between 3.5 to 5 grams of potassium per day. That’s the intake of potassium shown to minimize the risks of high blood pressure and kidney stones. Some of my recommended sources for potassium are raw spinach, avocado, mushrooms, salmon, steak, pork loin, and coffee.

People often blame high sodium diets for high blood pressure, but this claim doesn’t hold up to scrutiny. It’s not too much sodium driving the problem, but too little potassium, too much sugar, and too little exercise.

Producing energy. Synthesizing DNA. Growing muscle. Building bone. Maintaining your heart beat. What do these functions have in common? That’s right, they all depend on magnesium.

Because magnesium does just about everything, magnesium deficiency can be tricky to diagnose. The list of symptoms—chronic inflammation, anxiety, irritability, cardiac arrhythmias, osteoporosis, tremors, migraines, hypertension, etc.—is too long to list here. (See this blog by LMNT co-founder Robb Wolf for a deep dive on magnesium.)

The best sources of magnesium are leafy greens like spinach, kale, chard, and beet greens. Nuts, seeds, and dark chocolate are also rich in this mineral. If you’ve already optimized your diet and want to use a supplement, I suggest ZMA (Zinc + Magnesium Aspartate) or any other form of magnesium with high bioavailability, except Magnesium Oxide, which can cause diarrhea.

The recommended daily allowance for magnesium is around 400 mg for men, and 320 mg for women, but I recommend shooting for between 400 and 600 mg per day based on the evidence I’ve seen. Assuming you have healthy kidneys, there’s no downside to getting a little extra magnesium.

Calcium and Other Electrolytes on Keto

I recommend avoiding large calcium supplements. Supplementing too much calcium can cause transient hypercalcemia (high blood calcium), and some of that calcium can end up in your arteries. This is likely why calcium supplementation has been linked to increased heart disease risk. This is not to be confused with dietary calcium, which does not appear to increase risk of heart disease.

On that topic, most people get enough dietary calcium to begin with. However, if you’ve done a dietary analysis and determined that you aren’t getting enough calcium, my favorite pro tip is to save your egg shells, clean them, pulverize them, and then add them to a shake or beverage of your choice. A single egg shell contains about 3,500 mg of calcium.

What about the other electrolytes? Here’s why you shouldn’t worry about them:

Getting Enough Electrolytes on Keto

To optimize your keto electrolyte intake, start with a dietary analysis. Tally your meals in an app like Cronometer, then see where you stand. Aim for:

After hitting these targets through diet and supplementation, calibrate your sodium intake to your lifestyle. For example, if you’re active, you may need double or triple the baseline dose to replace sweat loss. (NHL athletes, for example, may consume several sticks of LMNT in a single game!)

For most people, it’ll be all smiles when you dial in your electrolytes on keto. Get them handled up front, and your body will thank you.