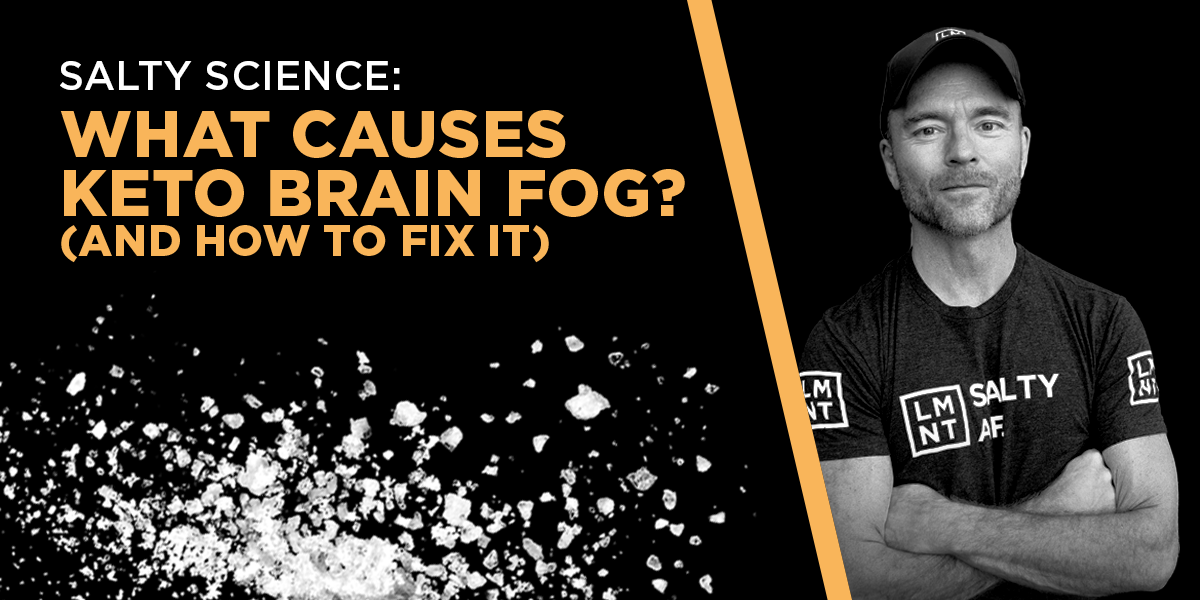 What causes keto brain fog? (And how to fix it)

From the desk of
Robb Wolf
Science → What causes keto brain fog? (And how to fix it)

People adopt keto and low-carb diets for a wide variety of reasons, but one of the biggies is improved cognition. That’s why it can be really frustrating to have brain fog on keto. Isn’t the keto diet supposed to fix brain fog? Isn’t it supposed to enhance mental acuity?

There’s promising scientific evidence that boosting ketone levels improves cognitive function, at least in some folks. Speaking for myself, I’m at my best mentally when in ketosis. I’m focused, I think more clearly, and can concentrate for longer. But not everyone feels this way. This could mean keto is not a good fit for them, but in most cases it’s either an easily preventable electrolyte deficiency (specifically sodium), or simply the body adjusting to a low-carb regimen.

Brain fog is one of several symptoms that often affect people in the early stages of low-carb dieting, as well as headaches, irritability, low energy, insomnia, constipation, and weakness. Collectively, these “keto flu” symptoms are most often a result of electrolyte deficiency.

In other cases, the brain needs time to adjust to keto. Think of it this way: if you start lifting weights after a long break, will lifting weights instantly make you feel better? Of course not. The next morning, you’ll probably feel like someone zipped you in a sleeping bag and tossed you out of a moving car.

Your muscles need time to adapt to a new strength training program. Similarly, your brain needs time to adapt to a ketogenic diet. You may not feel your best at first, but once you adapt, you may unlock a new level of mental clarity, provided you’re also getting enough electrolytes.

This claim seems specious if you’re wallowing in a keto-induced fog. I get it. That’s why I wrote this article: to explain why keto brain fog happens, and to offer solutions. But first, let’s start by defining brain fog in a general sense.

What Is Brain Fog?

Brain fog is an ambiguous term. Depending on the situation, it might mean:

Simply put, brain fog is synonymous with mild cognitive impairment. When you have brain fog, you aren’t quite yourself.

This is true whether you’re alone or with others. Having brain fog can decrease your productivity, communication skills, and mood. Others will notice.

It’s one thing to have a stiff neck or an aching knee. It’s another thing entirely to have a mind that isn’t operating at capacity.

As you might imagine, the consequences of brain fog careen into every aspect of life. That’s why it’s so important to get it handled. And the first step of getting brain fog handled is to determine what’s causing it.

Brain fog has a long list of potential causes. We’ll talk about the keto diet soon, but keto-related brain fog is just one blip in the brain fog universe.

If you’re experiencing brain fog on keto, it might have nothing to do with keto. It might be a lack of sleep, a lack of exercise, a nutritional deficiency, or a health condition.

Poor sleep is a good place to start looking. Sleep deprivation is well-documented to impair focus, alertness, memory, and reasoning ability. These effects can occur after just one night of short sleep.

Don’t forget about exercise too. All types of physical exercise, it’s been shown, induce positive changes in brain function. A sedentary person is doing themselves a cognitive disservice by staying sedentary.

A handful of nutrient deficiencies can also cause brain fog. The most common is probably a deficiency in vitamin B12, a molecule vital for brain function.

Why is B12 deficiency so common? One reason is: As we age, we produce less stomach acid, which reduces the amount of B12 we can get from food. For a deep dive on this topic, I recommend this article by functional medicine practitioner, Chris Kresser.

Moving along, medications or supplements may also cause brain fog. This can range from serious clinical interventions (like chemotherapy) to supplement usage, like melatonin to promote sleep. Different compounds affect different people differently.

Finally, the symptom of brain fog is associated with many health conditions. These include:

The last bullet—gut dysbiosis—deserves further explanation. As you may know, the gut and brain are closely linked. The gut (and the critters that live there) are an integral part of your nervous system.

By restricting the favorite food of bad microbes (carbs), the keto diet may help with both SIBO and SIFO. Check out our article on Keto for Gut Health to learn more.

Before talking about brain fog on keto, I want to address a seeming contradiction. Keto is supposed to improve cognitive function, not put you in a fog.

So which one is it? Does keto cause or cure brain fog?

Possibly both. It depends on the circumstance.

When keto causes brain fog, it tends to happen during the transition from high-carb to low-carb dieting. This transition can be rocky. More on that soon.

Transition period aside, being in ketosis has been shown to have cognitive benefits. Consider the following published examples:

Add this literature to the ocean of joyful reports (including mine) on keto for cognition, and you have a strong argument that ketosis improves brain function, at least in certain populations.

A lot of people quit keto because of keto flu. And of all the keto flu symptoms, brain fog may be the most vexing.

Here are the two main causes and what to do about them.

Most cases of keto brain fog are temporary. We’re talking a week or less after the commencement of keto dieting.

Why does brain fog crop up during this time? And why does it go away? To answer, we need to discuss how the brain uses energy.

The brain uses a lot of energy. The soft hunk of gray matter is only 2% of your bodyweight but demands 20-25% of your fuel. It’s greedy.

Glucose is your default brain fuel. When glucose is available, the brain runs almost entirely on this simple sugar. It can also run on lactate and pyruvate, but glucose shoulders most of the burden.

When you transition to a keto diet, you cut carbs almost to nil, which dramatically reduces your incoming supply of glucose. Your body has glucose backup systems—glycogen (stored glucose) and gluconeogenesis (manufactured glucose)—but these systems can’t make up for the deficit.

As a result, glucose supply to the brain dips. The brain doesn’t like that. It has less energy. The outward manifestation is brain fog.

That’s where ketones come in. On a keto diet, your liver burns fat to produce ketones. When ketones are elevated (called ketosis), your brain runs primarily on ketones instead of glucose. Ketones are your backup brain fuel.

But the shift from glucose to ketones doesn’t happen instantly. It could take a day, or it could take a week or more. In general, higher-carb starting points will require a longer transition period.

The remedy: Time. A week or so of keto dieting and the brain fog should resolve. But time isn’t also the answer—I experienced brain fog well after my transition because I wasn’t getting sufficient electrolytes, specifically sodium.

On a keto diet, fluid and electrolyte needs go up. Why? Think insulin.

When you restrict carbs, insulin (your master energy hormone) stays low. Low insulin helps you burn fat, but it also signals your kidneys to excrete more fluids and electrolytes—especially sodium.

If the water and sodium aren’t replaced, brain fog, headaches, and other cognitive symptoms can result. These are symptoms of both dehydration (water loss) and hyponatremia (low sodium).

In my experience, water intake isn’t the problem for most folks. Sodium intake is. That’s because a whole food keto diet is naturally low in salt. (Salt is 40% sodium). Plus salt gets bashed as being bad for your heart, despite evidence to the contrary.

The remedy: Shoot for 5 grams of sodium (2.5 teaspoons salt) per day on a keto diet. This means drinking electrolyte water and being generous with the salt shaker.

If you’re foggy during your first week of keto, don’t panic. It’s normal, and probably will resolve naturally within a few days.

If the brain fog persists, it may be a hydration issue. Be sure to get plenty of electrolytes, especially sodium and potassium. Take them along with fluids to replace what’s lost on keto.

Once you’re keto-adapted and properly hydrated, your keto brain fog should lift. You may even feel cognitively enhanced. Enjoy it.