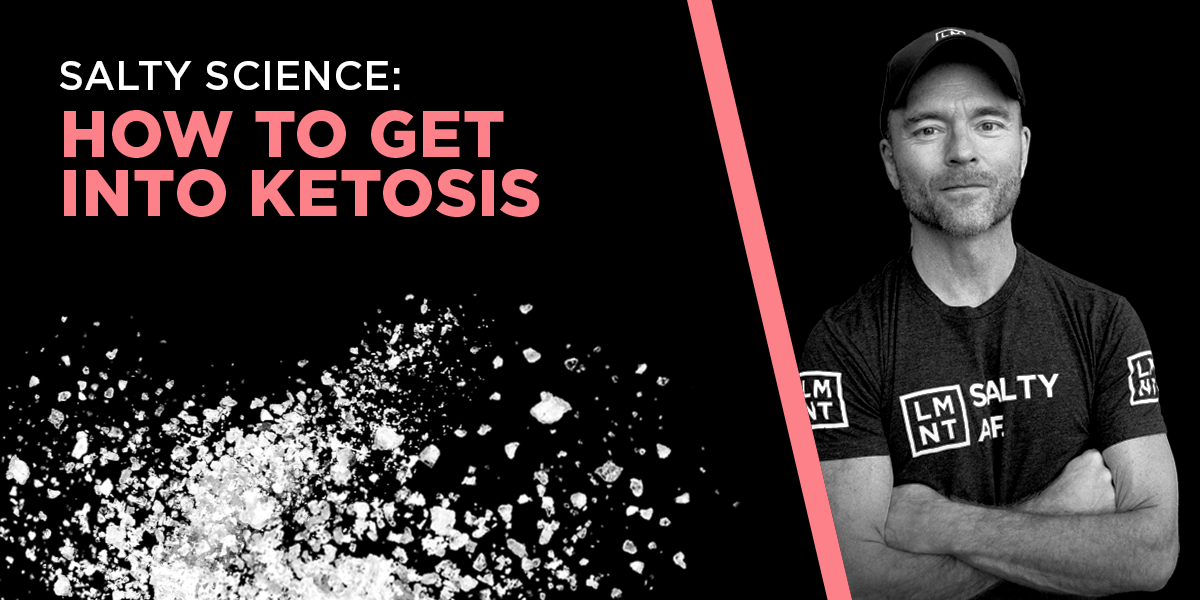 How to get into ketosis

Getting into ketosis is fairly individualistic. How long it takes, how it makes you feel and perform—all that stuff and more depends on your unique physiology and circumstances. And even assuming you benefit from a ketogenic state (I certainly do), the question of how to get into ketosis may not be the right one. Instead, I prefer to start with questions of when or if.

For example, when I’m in ketosis and I have a longer, more intense jiu jitsu session, I choose to take advantage of targeted carbohydrates in the form of glucose. I may “leave” ketosis for the duration of my training session, but that’s not a concern under these circumstances. So long as I don’t consume carbs in significant excess, it’s easy for me to reenter a ketogenic state because I’m fat-adapted.

Fat-adapted (aka keto-adapted) means my cells have adapted to burning fat and ketones for energy. So when I eat carbs, my primary fuel switches to glucose—but I’m never far from fat-burning mode.

An important note: fat adaptation progresses over a long period of low-carb living. Of course, the ketogenic diet is not an optimal fit for everyone. But in many cases, people simply haven’t eaten a ketogenic diet long enough to fat-adapt properly and reap the full benefits.

With that as our guiding principle, this article will address ketosis, its potential benefits, how to measure it, and some tips on kick-starting it. Let’s dig in.

If ketosis is your goal, you might think a positive test strip seals the deal. Technically, you wouldn’t be wrong. Ketosis is just the state of having elevated blood ketones—typically over 0.3 to 0.5 millimole/Liter (mmol/L) of beta-hydroxybutyrate (BHB), depending on who you ask.

But having ketones in the blood isn’t the same as being keto-adapted. An example will help.

Imagine you take a dose of exogenous ketones. (These are supplemental ketones). Your blood ketone levels will rise, but will your underlying metabolism shift towards fat-burning?

No. In fact, exogenous ketones have been shown to lower free fatty acids in the blood and subsequent fatty acid oxidation. It makes sense. Your body senses ketones rising and shuts off fat burning. It’s a defense mechanism to prevent dangerously high blood ketone levels known as ketoacidosis.

So yes. You can be in ketosis and not fat-adapted.

The converse is also true. You can be fat-adapted and not in ketosis. I exit ketosis all the time, but I’m still good at burning fat. Which means I can re-enter ketosis rapidly.

So the goal here is to keto-adapt, which could take a few weeks depending on your metabolism. From here onwards, I’ll be talking about ketosis in the context of fat-adaptation. But understand there’s a difference.

How You Enter Ketosis

There are two main ways to enter ketosis: fasting and carb restriction. Both cause blood sugar and insulin levels to fall, which in turn signals your liver to start burning (beta-oxidizing) fatty acids. This fat burning produces ketones and ultimately, ATP, the energy currency of life on earth.

Let’s leave aside the ATP and focus on the ketones. Normally, your brain runs entirely on glucose. But when ketones are elevated, your glucose needs are reduced by a factor of four, and ketones supply most of the brain power.

In other words, ketones keep your brain chugging when glucose is scarce. Like during a fast.

The fact is, the human body can only store about 500 grams of glucose in muscle and liver cells. If you aren’t eating carbs, that 500 grams of glycogen evaporates rather quickly. It’s only 2000 calories worth of sugar, after all. Not exactly long-term rations, and keep in mind, due to an enzymatic quirk, once glucose is stored in the MUSCLE as glycogen, it does not get back out.

But body fat… there’s plenty of that, even on a lean person. A quick example will help illustrate.

This is why we like burning body fat. It’s not running out any time soon.

I know I know, not every gram of body fat can be used for energy. Some is needed for normal physiologic functions.

But still, a little body fat goes a long way. And relevant here: Fat is the raw material from which ketones are made.

Let’s quickly hit on the benefits of ketosis, then I’ll explore how to measure it.

How do you know if you’re in ketosis? You measure it. You can do this a couple different ways:

To monitor your progress with keto, it makes sense to occasionally check ketone levels. If you’re above 0.5 mmol/L BHB, you’re in ketosis.

Ketones can be measured in the blood, breath, or urine. Blood testing, which can be done at home with a meter and test strips, is the most validated method—but breath and urine tests can be useful too.

The problem with relying on ketone levels to gauge your success? For one, you might be producing ketones, but not using them. This keto-adaptation problem won’t show up on a blood test.

Plus, outside narrow considerations (like controlling childhood epilepsy), nobody knows what ketone levels are optimal.

I understand the temptation to simply measure blood ketones and call it a day. But might I suggest other metrics to optimize for, like:

These should be improving, or at least not declining. After all, improving these markers is why you went keto in the first place, no? Plus, these markers give a better sense of keto-adaptation than ketone levels.

It’s also crucial to monitor your bloodwork (especially tests pertaining to heart health) on a keto diet. Some folks see big elevations in LDL cholesterol on keto. If you’re one of them, consider adjusting fat sources to include more monounsaturated fat and/or titrating carbs up a bit.

Tips To Get Into Ketosis Faster

Here are some simple strategies to accelerate your transition into ketosis.

Intermittent fasting (IF) is like an internal keto diet. Instead of burning dietary fat for energy, you burn body fat.

Fasting is synergistic with the keto diet. Why? Because both regimens provoke metabolic changes—low insulin, low blood sugar, increased fat oxidation, etc.—that complement one another.

There are many forms of IF. Some involve daily fasts of 12, 16, or 24 hours, while others alternate fasting and feeding days on a weekly schedule. My advice is to start with a 12 hour daily fast, then incrementally build to longer fasts.

Read more: Fasting: What you need to know

On keto, you typically limit carbs to under 10% of daily calories. Around 20 grams per day.

Keeping carbs low keeps blood sugar and insulin low, which in turn sends the ketosis bat signal. Carb restriction is, in fact, the single most important factor for entering ketosis.

Some folks find cutting carbs easy, others find it excruciating. The world doesn’t make it easy. Hidden carbs are everywhere—even tomato sauce can have upwards of 20 grams of sugar per serving.

To stay on top of your carb count, download a macro-tracker like Chronometer. Just input your foods and out pops a detailed summary.

The good news is that carb cravings tend to fade after you fat-adapt. Once you break the sugar addiction, everything gets easier.

Fat is the stuff from which ketones are made. After you swallow fat (as triglyceride), you digest and split those triglycerides into fatty acids. Then you either burn fatty acids directly (typically in the muscle) or convert fatty acids in your liver to make ketones.

But dietary fat does more than boost ketones. Fat helps you:

You might be worried that fat (especially saturated fat) increases heart disease risk. But this belief is based on bad data from the 1950s. More recent data—like these two meta-analyses on nearly one million people—shows no link between saturated fat consumption and cardiovascular disease risk. (Link 1, Link 2) Also, this is a great look at how although LDL-Cholesterol may increase for some following a low carb diet, the net effects are arguably beneficial with regards to cardiovascular disease potential.

Medium-chain triglycerides (MCTs) are the most ketogenic form of fat. When you consume MCT oil, it goes straight to your liver for ketone production.

The brain benefits are measurable. In one study, elderly folks had better working memory and attention after dosing MCTs.

Start slow with MCT oil (maybe a teaspoon) and work your way up. If you choose to ignore this advice, keep some adult diapers handy.

Although exogenous ketones originate outside your body, they’re indistinguishable from ketones made inside your body. Same substance.

Ketosis Is A Tool

Before I sign off today, I want to make a quick point. Ketosis can be beneficial, but it’s not for everyone or every situation.

The truth is, we don’t know much about the long-term effects of sustained ketosis. I suspect it depends on the person. If you’ve read my latest book Wired to Eat, you know how much individual differences affect our responses to food. Keto may be the optimal longevity diet for one person, but a crappy choice for another.

I suggest you view ketosis is a tool. A temporary state with some sweet potential benefits.

And don’t be afraid to carb cycle once in a while. You can always return to keto mode, especially once you’re keto-adapted. And, if you find that you generally run best near Keto Avenue…well, now you know!