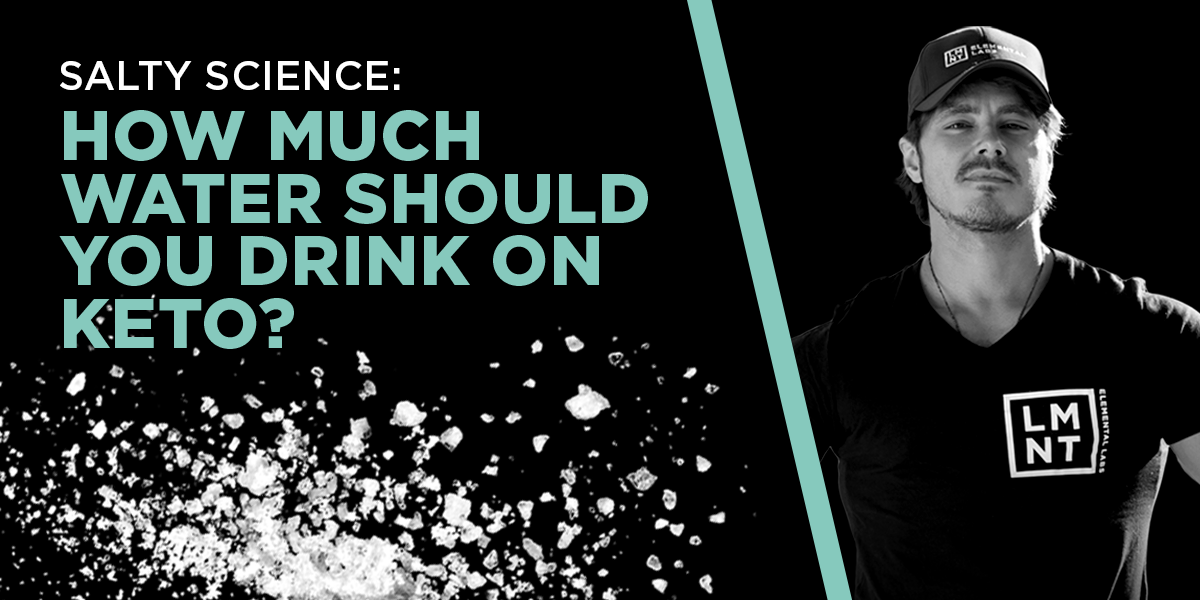 How much water should you drink on keto?

From the desk of
Luis Villaseñor
Science → How much water should you drink on keto?

A lot of people worry about dehydration on a keto diet. Dehydration often gets blamed for the headaches, weakness, and cramps that comprise the infamous keto flu.

As a result, water gets advertised as a keto cure-all. Tired? Pep up by slugging water. Hungry? Curb those cravings with a cool glass of H2O. Head throbbing? Find the jug, quick!

It seems logical. You lose more fluids on a low-carb diet, so you probably need to drink a bit more to replenish. In my experience, however, a water-only hydration strategy usually makes things worse. Keto or otherwise.

I’m not saying that dehydration is never an issue. It can be. But overhydration is the problem that keeps me up at night, and not just because of the frequent bathroom breaks.

The thing that concerns me is that overhydration may cause severe electrolyte imbalances. Add this to an electrolyte-depleting ketogenic diet and I’m very concerned.

It’s crucial to manage your electrolyte levels on keto. If you don’t, electrolyte deficiencies will manifest as symptoms like headaches, low energy, or muscle cramps. And drinking more water will only make the symptoms worse.

Nonetheless, conventional wisdom encourages overhydration. We’re supposed to drink 8 glasses of water per day. (Or more on keto!). I have a few thoughts on this.

The Myth of 8 Glasses of Water Per Day

You’ve probably heard of the 8×8 rule. It’s a slice of pseudo-wisdom that’s been handed down for generations. It states that you should drink 8 ounces of water 8 times per day for optimal health and hydration.

The 8×8 rule dates back to 1945, when the Food and Nutrition Board of the National Academy of Sciences recommended adult males should consume about 2500 ml (~84 ounces) of water per day. There was no supporting science, but the recommendation stuck anyway. I mean NONE… 8 times 8 doesn’t even equal 84.

In the 1960s, the physician Irwin Stillman encouraged 8×8 hydration to support his high-protein low-carb Stillman Diet. He claimed the water was necessary for the kidneys to wash away fatty acids after breaking down fat. Again, there was no supporting science for this cockamamy theory.

A medical professor named Heinz Valtin also thought 8×8 was cockamamy, so in 2002 he reviewed all the relevant literature on hydration. The punchline? “No scientific studies were found in support of 8×8”.

Hydration is best defined as maintaining adequate fluid balance in body tissues. It can also mean “drinking water”, but that tells us nothing about healthful hydration.

Healthful hydration isn’t just about drinking water. That’s just one input in the system. The other inputs are electrolytes like sodium, chloride and potassium. These minerals maintain fluid levels inside and outside your cells so you can function at your best.

Thanks to your kidneys, you don’t need to get these inputs exactly right. If you drink too much water, you dispose of the excess through urine. And if your fluid intake is low, you secrete antidiuretic hormone (ADH) so your kidneys retain more fluid. You pee less.

But if you’re on a keto diet—or any diet, really—how much water should you drink?

There are two common hydration strategies:

The first strategy is designed to prevent dehydration, or net water loss from the body. When total body water decreases by 2% or more, that’s called hypohydration.

Rigorous athletes often become hypohydrated due to sweat loss. It happens faster than thirst can keep up. In other words, drinking to thirst is inadequate to compensate for water losses in these people.

For the ordinary individual though, thirst can often be a great indicator of hydration levels (of course there are exceptions where thirst becomes less accurate, even for the average Joe—high altitude training and very cold climates, to name two).

The question is: does it matter? Is preventing dehydration such an important goal?

Perhaps not. In a 2019 systematic review that looked at drinking on a set schedule vs drinking to thirst in 82 athletes, dehydration didn’t significantly impact athletic performance. Athletes drinking to thirst performed roughly the same as the set-schedule group, despite losing about double the body water.

But isn’t dehydration dangerous? Again, perhaps not as much as it’s cracked up to be. According to a review from MDAlert, there isn’t a single sports-related death from dehydration in all the medical literature.

In fact, the bigger danger is drinking too much.

The Problem With Overhydration

To prevent dehydration, many athletes drink on a set schedule. But this overhydration strategy causes a more serious problem: Hyponatremia.

Hyponatremia is the clinical term for dangerously low sodium levels. The symptoms of hyponatremia include muscle cramps, fatigue, weakness, and confusion. In severe cases, hyponatremia can be fatal.

Because the symptoms of dehydration mimic the symptoms of hyponatremia, people often get them confused. But drinking sodium-free water to treat “dehydration” only makes hyponatremia worse. Tragically, one basic army trainee perished from this mix-up. He was given water when he needed sodium.

Most people, of course, won’t die from overhydration. The electrolyte deficiencies I see among low-carb and keto dieters are more subtle. But even subtle deficiencies can cause a constellation of keto flu symptoms.

There are several reasons keto dieters are more prone to electrolyte deficiencies:

Let’s look at these individually.

When people switch to a whole foods keto diet, they lose their main source of dietary sodium: Packaged foods.

I’m all for eliminating junk food. It’s bad for you. But is it bad because of the salt? I don’t think so. Salt has been demonized because unhealthy foods—packed with sugar or vegetable oils—also tend to be high in salt. We’ve thrown the baby out with the salty bathwater.

The result is that Paleo and keto tribes believe it’s healthy to limit sodium consumption. And then, six hours, days, or weeks into the diet, they wonder why they feel like a donkey who just crossed the Sahara.

They’re not supplying enough sodium to meet daily needs. The sweet spot for non-keto dieters seems to be about 5 grams sodium per day (2.5 teaspoons of salt), and low-carb acolytes probably need more.

Eating a keto diet is all about drastically restricting carbohydrates and/or restricting calories. When you restrict carbs, you limit the necessity of the hormone insulin to rise above baseline levels.

One of insulin’s many jobs is to tell your kidneys to retain sodium. So as insulin levels fall on keto, you get the opposite effect: You lose more sodium.

You also lose more fluids on keto, which increases dehydration risk. Which leads me to my final point…

#3: Drinking too much water

Let me steel-man this argument before disagreeing. Low-carb diets do, in fact, have a diuretic effect. This is driven by the same insulin-mediated mechanism that makes you excrete more sodium. On keto, you probably do need a bit more water.

But if you make water your sole focus, you risk diluting blood sodium levels. And compared to the risks of hyponatremia, the risks of dehydration are minor league.

But you don’t need to trade one for the other. You can prevent both dehydration and overhydration.

How to Stay Hydrated On Keto

A keto hydration strategy should:

I recommend using thirst to guide your fluid intake. It’s a tightly-regulated system fine-tuned over millions of years of hominid evolution.

This brings me to my fundamental rule of healthful hydration: drink electrolyte water to thirst. I created LMNT, my salty electrolyte drink mix, to make this easy.

Drinking to thirst is usually enough, but certain situations may require more aggressive hydration. These situations include:

When you drink additional fluids, it’s doubly-important to add sodium to those fluids to prevent exercise-associated hyponatremia. The water should taste a bit salty.

So if you’re feeling “dehydrated” on keto, it probably has more to do with electrolytes than water.