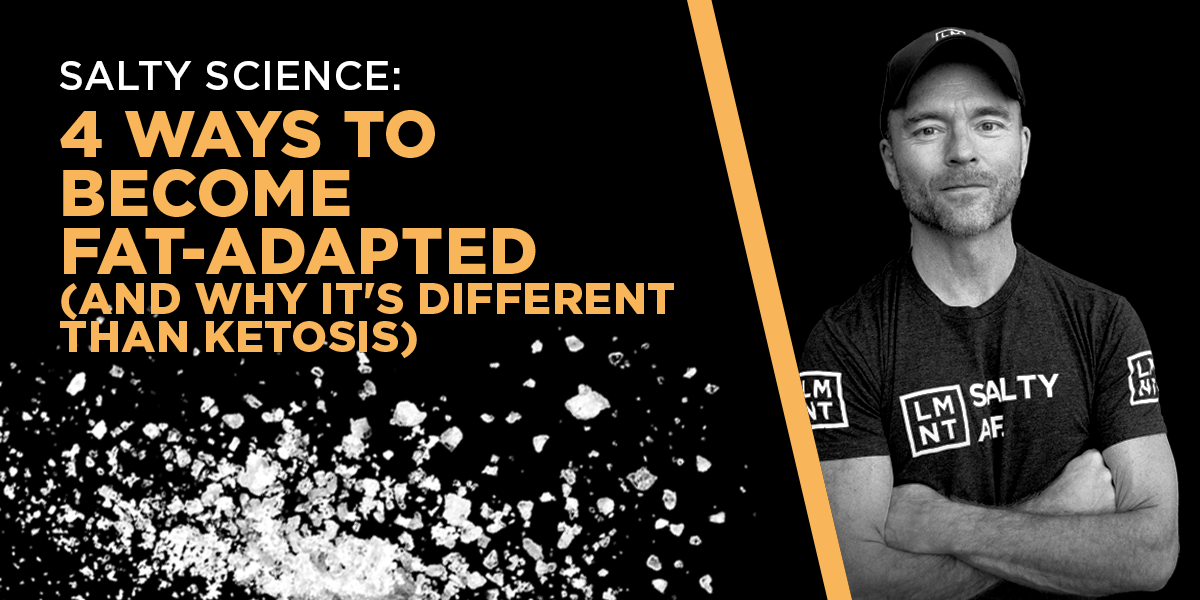 Ketosis gets credit for a lot of health benefits. Sustainable fat loss, better energy, a razor-sharp mind—the list goes on.

But here’s the thing. If you’re not fat-adapted, you won’t experience most of these benefits.

Being fat-adapted, although a bit technically distinct from “keto-adapted”, means you can effectively use ketones and fatty acids for energy. This allows you to access stored body fat during a fast, and get maximum mileage from a high-fat diet.

I know, the whole ketosis vs. fat-adapting thing is a little confusing. Can’t we just pick one term and stick with it?

Not necessarily. Yes, ketosis and fat-adaptation often operate in parallel. But they aren’t the same. I’ll illustrate with an example.

One day, Bill sees an ad for keto pills. (Keto pills are exogenous ketones). The ad promises weight loss, so he buys a bottle. When the bottle arrives, Bill pops a handful of pills, his blood ketones rise, and he’s officially in ketosis.

Not even close. As a matter of fact, he’s likely blocking fat-adaptation by taking exogenous ketones. That’s because exogenous ketones are well-documented to lower free fatty acids in the blood.

The truth is, fat-adapting takes time and strategy—not supplementation. Today I’ll cover the basics of fat-adaptation, what benefits you can expect, and how to structure your diet and lifestyle to promote fat burning.

Fat-adaptation refers to your ability to convert fat to energy. When you’re fat-adapted, you don’t need a steady stream of carbs (glucose) to power your day. Instead, you tap into a more abundant energy supply: body fat.

This adaptation was an absolute must back in Paleolithic times. In those primal days, our ancestors didn’t have 24/7 food access. When calories became scarce, their fat mass kept them alive, often for weeks on end.

Let’s talk a little physiology now. The ability to utilize fat depends, in large part, on the hormone insulin. When insulin levels are low—like on a fast or keto diet—body fat is broken apart (via lipolysis) and burned (beta-oxidized) by cells in your liver. That’s what we call fat burning.

Fat burning produces energy—yes—but we can go a little deeper than that. Specifically, when you beta-oxidize fatty acids, you produce a compound called acetyl-CoA, the precursor to your primary energy currency, adenosine triphosphate (ATP).

Fatty acid oxidation also generates the ketone bodies beta-hydroxybutyrate (BHB), acetoacetate, and acetone. These ketones (especially BHB) are then converted to acetyl-CoA, which is converted to ATP via the citric acid cycle.

So that’s how energy (and energy precursors) get made from fat. Interestingly enough, you don’t need to be strict keto to make this happen.

But now you’re probably wondering: can you be fat-adapted but not in a ketogenic state?

Yes you can. Fat-adapted just means you can easily access fat (either dietary fat or body fat) for energy. It doesn’t mean that glucose can’t or won’t get burned. And so having carbs now and then—provided it’s not excessive—is no problem for the fat-adapted enthusiast.

Consider a keto-adapted athlete enjoying a dinner of steak and two large sweet potatoes. The carbs will surely kick her out of ketosis, but by morning, she’ll be burning fat again.

This is an important point. When you’re fat-adapted, you can handle a carb load and rapidly return to burning fat once blood sugar and insulin levels subside.

People often attribute the weight loss, stable energy, and performance enhancements of a high-fat diet to ketones. But many of these benefits are due to fat-adaptation. These benefits include:

Okay, let’s get to the practical stuff now. How do you become fat-adapted?

Becoming fat-adapted isn’t super complicated. It mostly involves diet and lifestyle factors that are well-within your control. Ready to learn them? Cool.

If you want to fat-adapt, you’ll probably need to restrict carbs. The “why” is fairly simple:

Your carb tolerance will depend, among other things, on your activity level. The more active you are, the more carbs you can eat and stay keto-adapted. Less active, less carbs.

The keto diet is the most popular low-carb approach, but it’s not the only way to skin this cat. I often recommend a Paleo-style approach with 50 to 100 grams of carbs per day. Active folks in particular tend to do very well on this regimen.

Whatever you do, steer clear of sugar. Refined sugar is why our species isn’t fat-adapted anymore. But as you’ve probably noticed, sugar is in everything—cookies, sauces, dressings, you name it—so you’ll want to keep a watchful eye on food labels.

As you decrease carbs, you’ll want to increase dietary fat. It makes sense. Eating fat trains your cells to run on fat.

Plus, dietary fat has a MUCH smaller impact on insulin levels than carbs. This low-insulin state helps you stay in fat-burning, not fat-storage, mode.

And so in your quest for fat-adaptation, you should eat lots of healthy fats like olive oil, coconut oil, nuts, avocados, butter, and animal fat. Somewhere in the range of 50% to 75% of your daily calories. I always caveat this with make sure you’re getting adequate protein. After you dial in protein, use calories from fat as a lever to build, maintain, or lose body mass.

But high-fat doesn’t mean unlimited fat. This narrative that you can suck down fat like a Shop-Vac and still get results just ISN’T TRUE.

Actually, the opposite seems to hold: As fat intake goes up, caloric needs go down. I’ve chatted with Greg Glassman (the founder of Crossfit) about this, and he estimates folks need about 20% less calories on high-fat diets. And it’s not just Greg. My former coaches have also noticed this phenomenon across hundreds of clients.

When you stop eating, your body still needs energy. Where do you think that energy comes from?

Some comes from carbohydrate, but your glucose reserves (glycogen) get used up quickly. The liver and muscles only hold about 500 grams.

What about protein? Well, there’s protein in muscle tissue, but our forebears wouldn’t have lasted long if they lost significant lean mass on a temporary fast. In fact, the ketones produced while fasting protect your muscle mass.

That leaves body fat. Yes, accessing body fat through fasting is a valuable tool in your fat-adaptation toolkit.

If you’re new to fasting, start with a 12 hour daily fast and work your way up as comfort and schedule permit. For more tips on fasting, check out this comprehensive guide.

Exercise alone won’t get you fat-adapted, but it will make the process WAY easier.

High intensity interval training (HIIT)—even just once per week—seems especially potent in this regard. I get my HIIT through jiu-jitsu, but you might get it through sprinting, Crossfit, tennis, or some other modality. Do something you love and it won’t feel like work.

Fat-adaptation is a desirable state. It means you can utilize body fat for energy. Super helpful for body composition goals.

But as we wrap up today, you might be wondering: How long does it take to fat-adapt?

There isn’t a simple answer. The truth is, your fat-adaptation-time depends on your genes, proclivity for fasting, dietary choices, and a host of other factors. An athlete may take hours, while a couch potato may take months.