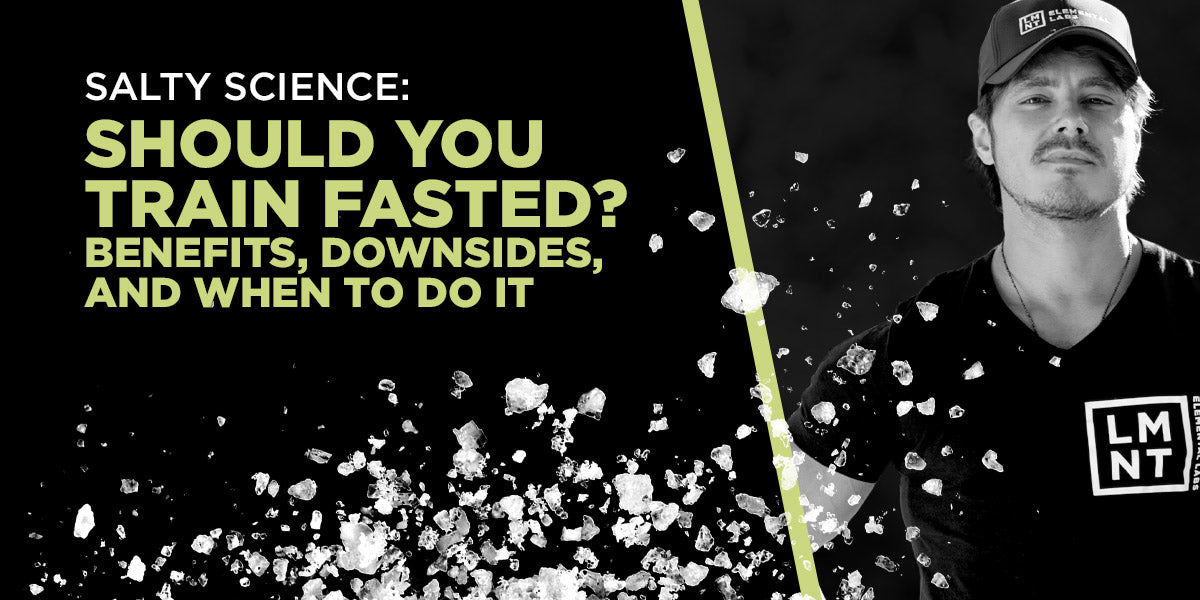 Should you train fasted? Benefits, downsides, and when to do it

From the desk of
Luis Villaseñor
Science → Should you train fasted? Benefits, downsides, and when to do it

A lot of clients in my coaching career ask me about fasted training. They want to know if they’ll burn more fat, enhance their performance, and build muscle faster if they exercise on an empty stomach.

The answer requires some nuance. That’s why I wrote this article.

When it comes to fasted exercise, most people fall into one of two camps. The first camp says that you should never exercise fasted. According to this view: If you train in a fasted state, your muscles will melt like butter in a skillet.

The second camp, on the other hand, treats fasted training like a religion. These folks refuse to work out unless they’ve gone 12 hours without food. If they train fed, they might miss out on a growth hormone peak or (gasp) a bit of fat burning potential.

Both sides have science on their side. There’s evidence, for instance, that performance declines and muscle degrades during a fast. Conversely, there are benefits of fasted training—like enhanced endurance capacity—worth exploring.

Me? I generally don’t recommend fasted training (especially for strength training, with the purpose of building muscle), but I have seen some interesting science on the topic. So while I’m closer to the “anti” camp, I’m not dogmatic about it and there are some situations where it may be interesting to experiment.

Today I’ll run through the benefits and downsides of fasted training, then you decide for yourself if it’s worth trying. Let’s start with the elephant in the room: fat-burning.

Do You Burn More Fat During Fasted Exercise?

Fasting also depletes glycogen stores, which means that less glucose is available for energy during exercise. Theoretically, fat should replace that glucose as fuel during fasted activity.

For example, performing low-intensity aerobic exercise (walking, light jogging, etc.) while fasted appears to enhance fat-burning. When someone eats carbs before easy exercise, it blunts fat oxidation, probably due to an increase in the hormone insulin.

But moderate or intense cardiovascular exercise is different. During moderate and intense exercise, fat oxidation is roughly the same in both the fed and fasted state.

Why? Because harder aerobic exercise releases more fat into circulation than you can possibly use. You break up tons of body fat through lipolysis, but you don’t use it all. Let’s look at a published example now.

Seven men were fed either placebo or carbohydrate (glucose) before and during a moderate-intensity cycling session. The results? Not only did the carb group perform better; they also had similar fat-oxidation as the placebo group.

In other words, eating a small amount of carbohydrates enhanced performance without reducing fat burning. This is a big reason I recommend a targeted ketogenic diet for those struggling with low-carb or fasted exercise, or certain exercises that are more glycolytic in nature.

The bottom line? Fasted training enhances fat-burning during light exercise, but not during more rigorous activities.

I’ll add that in the context of a Low-carb or Ketogenic diet, you are already using fat as the main energy substrate… so you won’t necessarily benefit more from fasted training at all.

Let’s review the interesting science I mentioned earlier. The potential benefits of fasted training include:

Now for the downsides—the reasons why I don’t recommend fasted exercise. Here are the big ones:

If someone wants to add muscle, I don’t recommend fasted training.

Fasted training, cardio in particular, appears to hasten the rate of proteolysis—or the breakdown of protein in muscle tissue. “Carbing up” before cardio, however, can slow the rate of this breakdown by keeping glycogen stores full. But note that that is usually only for high end, performance-focused athletes. A recreational athlete, or someone who is focused on fat loss, does not need to “carb-up” at all – I’ll explain further down a strategy to circumvent this.

But what about fasted strength training? Isn’t that best for growth hormone secretion? Well, maybe GH goes up, but you’re priming yourself for muscle loss if you pump iron without amino acids protein (that includes leucine – the master signaling aminoacid) in your system. Remember, as I explained before, the purpose of growth hormone is not to “build” but rather to re-distribute energy substrates to certain tissues in your body.

If you want to gain muscle, you need to eat leucine-rich protein (like whey) in close proximity to strength training.

To be clear, you don’t need carbs to build muscle: Protein from whey itself can rise insulin, which prevents muscle catabolism. Protein and strength training work just fine—and the ketones generated on low-carb or fasting regimens have muscle-preserving properties. That’s why I’ve seen thousands of clients succeed at building muscle on low-carb diets.

Certain types of exercise—HIIT, heavy lifts, etc.—require hard effort to get maximum benefits. But when you train fasted, it’s impossible to give 100% effort. Fasting simply isn’t suited for maximal performance.

In one study, giving athletes 100 grams of carbohydrate before cycling significantly increased their time to exhaustion compared to fasted counterparts. In other words, food helped them stay on their bikes longer.

One final point. If you force yourself, day after day, to exercise in a low-energy fasted state, you will start to hate exercise. That’s the opposite of what we want.

These stressors, properly applied, induce a hormetic response—a beneficial adaptation to stress. When you stress your muscle fibers by doing 5 sets of heavy squats, they repair, adapt, and come back stronger.

But you need to be careful. Your body has a limited stress capacity, and if you exceed that capacity, you could suffer.

I’ve seen this happen with several clients. Before we start working together, they’re busting 6 to 7 days a week, doing 1 to 2 hours of cardio per day, on an empty stomach. And they’re feeling horrible, sleeping poorly, and what is worse: not leaning out.

The first thing I have them do is cut back on the training load, especially on cardio. As I tell them: fat loss comes from diet, not training, and training is to build and improve health. Overtraining can boost cortisol, which can make it harder to lose weight.

I also advise them against fasted training. Exercise is already stressful. Keto can also be stressful for some people (it is after all, what some people call a “fasting-mimicking diet”). Doing it fasted adds too much additional stress to the equation.

I get this question all the time. People want to know if there are gender differences for fasted exercise.

The research seems to favor men, at least for certain fasting benefits. For instance, one study found that men, compared to women, had enhanced muscular adaptations after endurance exercise. Both genders had significant boosts in VO2 max.

Another study split twenty young women into two groups: fasting exercise and fed exercise. Both groups lost weight, but there were no significant differences in fat loss or weight loss between the groups. But when men train fasted, at least at low intensity, it seems to increase fat oxidation.

These were small studies, though, and they may not apply generally. So I wouldn’t use gender as a major criterion for making training decisions.

That said, let’s remember that hormonally wise, men and women are different and long fasted periods are not suggested for women. In all, we suggest a more conservative approach for women, like 12 hours of fasting, or the classic 16/8 intermittent fasting protocol, and breaking the fast before training with a protein shake.

Should You Train Fasted?

A more reasonable approach lies somewhere in the middle. If you want to do low-intensity exercise before breakfast, go for it. A 20 minute walk, some light yoga, an easy bike ride. There’s a chance you’ll burn more fat than you otherwise would.

But once the exercise intensity starts to ramp up, eat something first. Training fed, especially when talking about strength training, gives you more energy, prevents muscle breakdown, and reduces your overall stress burden.

For my clients, I suggest a coffee pre-workout before strength training sessions: strong Coffee mixed with 25g of a good quality whey protein, 10 grams of MCT’s for energy, half a gram of sodium, and in some particular cases, 5-10 grams rapidly absorbable carbs like glucose. This is a true and tried formula that will help you maximize muscle gains.