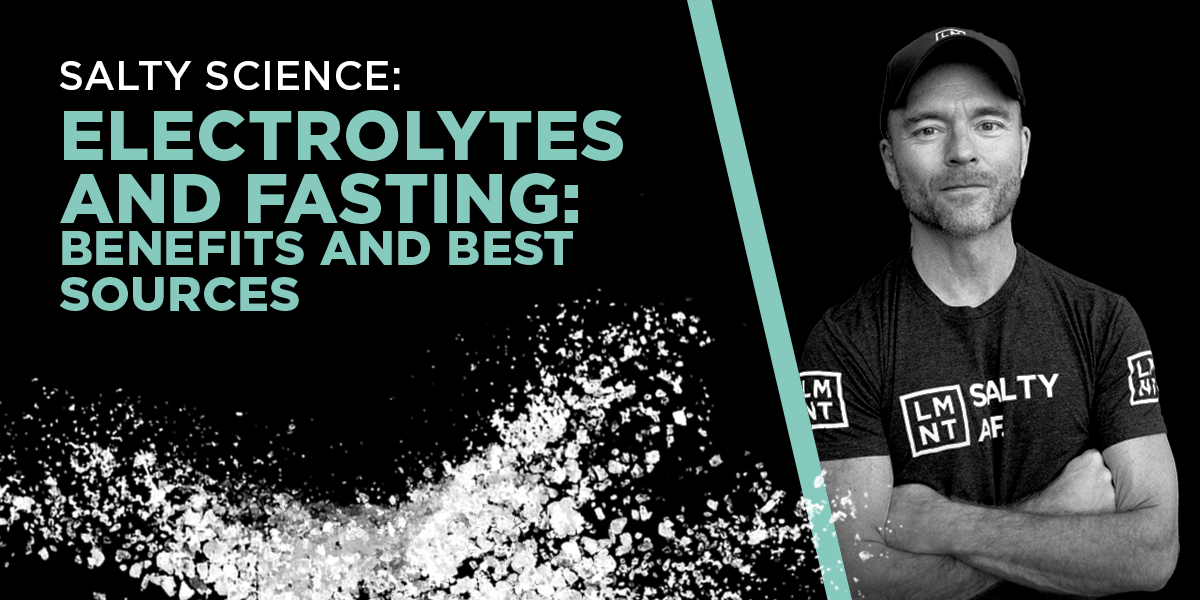 From the desk of
Robb Wolf
Science → Electrolytes and fasting: Benefits and best sources

Intermittent fasting is a big deal these days. I wrote my first article on IF back in 2005. And although we’ve learned an enormous amount in that time, there is still far more that we do not know than we do. The main benefits ascribed to fasting (intermittent or more prolonged) generally focus on weight loss, a shift towards a more fat-centric metabolism (including a ketogenic state), the potential of enhanced longevity, and the much-discussed topic of autophagy.

One thing that seems fairly certain? We tend to eat too much and too often… at least in our cushy, Westernized lives. From my perspective, it’s unclear if there’s a significant benefit to fasting beyond simply eating a species-appropriate diet. I was arguably one of the first popular authors on the fasting scene, and although I think it’s a great tool, it’s not the only tool. It needs to be done correctly, with a specific goal in mind, and with the understanding that fasting is not the “beez kneez” for everyone.

Currently, the optimal fasting protocol remains unknown, and I’d wager that optimal depends entirely on the individual and their goals. In other words, there’s not a one-size-fits-all approach. But for the sake of this article, let’s assume that fasting generally is beneficial, particularly for one that feels more comfortable while in a fasted state. With that perspective in place, one of the most important things to discuss is proper electrolyte supplementation.

Similar to keto diets, when fasting is implemented for medical purposes, special attention is given to electrolytes—particularly sodium—to ensure the process is both safe and effective. Why? Because these ways of eating entail a much greater loss of electrolytes. I don’t want to make a big appeal to authority, but if the medical establishment recognizes that fasting and ketosis require significant electrolyte supplementation, we might give that idea some airplay and experimentation.

My inbox is overflowing with questions on this topic, so today I’ll cover this topic from a theoretical and practical perspective. You’ll learn why you should take electrolytes during a fast, which ones to take, recommended amounts, and what benefits you can expect. No further ado—let’s dive in.

A Primer on Electrolytes and Fasting

Perhaps one of the most common questions I’ve been asked is if electrolytes will break a fast. Electrolytes don’t have calories, so they don’t stimulate pro-growth pathways like mTOR, which is activated by carbs (read: insulin) and branched-chain amino acids. With mTOR suppressed, a pathway called AMPK stays active. AMPK drives many fasting-related benefits: fat-burning, autophagy, and more.

Some folks even worry about stevia—used to sweeten our tasty electrolyte drink mix, LMNT—causing an “insulin response,” thereby activating mTOR. Although we don’t have research on this topic, I find this to be a BIG reach. If one were to release any appreciable insulin while in a fasted state, blood glucose would decrease. One could argue that 20 minutes later, you’d then be in an even deeper state of ketosis. This is all fairly speculative, of course.

My main point? Proper electrolyte supplementation is essential to a fast. It’s more important to navigate your time IN the fasted state than fret over minutia like stevia. All that said, if you’re still concerned there are options without stevia like Raw Unflavored LMNT.

What Do Electrolytes Do?

Throughout your body, a handful of electrically-charged minerals help your heart beat, your muscles contract, your immune system function, and your brain cells communicate. These minerals are called electrolytes.

The main electrolytes are sodium, potassium, magnesium, calcium, phosphate, chloride, and bicarbonate. They’re all important, but I’ve found that people are most likely to be deficient in these three:

If you’re deficient in electrolytes, especially sodium, you may experience muscle cramps, low energy, headaches, irritability, and neurological symptoms. These side effects can creep up rather quickly during a fast. And if you are experiencing all those symptoms, it’s more likely that you will bail on your fast.

Many things can deplete your electrolyte levels: sweating, overwatering, vomiting, diarrhea, low-carb diets, and—yes—fasting. Losing electrolytes through sweat or feces is easy to understand, but losing them through a low-carb or fasting regimen isn’t so straight forward.

The first thing to understand is that fasting and the ketogenic diet provoke similar metabolic responses. Keto is, in fact, a “fasting-mimicking diet.” Because both regimens minimize carbs—temporarily or otherwise—they also lower blood sugar. And when blood sugar is minimized, insulin is too.

Insulin is best known as an energy storage hormone; it’s a chemical messenger that commands blood sugar out of your blood and into your cells. But bossing around blood sugar isn’t enough for insulin. It also needs to boss around your kidneys.

Hold onto that sodium, says insulin to your kidneys. Don’t pee it out.

And your kidneys listen. This is why folks with perpetually high insulin levels (like type 2 diabetics) tend to be salt sensitive. Since they can’t pee out sodium, they can’t effectively regulate blood pressure.

The opposite is true when insulin levels are low. You pee out more sodium. And no dietary strategy (not even keto) lowers insulin more than fasting.

In some people, insulin levels are immeasurable during a fast. Great for burning fat, but awful for retaining sodium. Let’s look at some published evidence now.

Research On Electrolytes While Fasting

In the limited research that exists, we find that sodium, potassium, and body water are energetically peed out during extended fasts. As far as electrolytes go, you see significant sodium excretion (called natriuresis) that peaks around day four of the fast, with a similar but less pronounced pattern of excretion for potassium.

In one 1970s experiment, a morbidly obese man fasted for 382 days. This intervention more than halved his body weight. According to the authors, there were no complications worth mentioning.

It’s interesting to note, however, that his sodium and potassium levels dropped significantly during the first 100 days of the fast. They later stabilized, but one wonders if these stabilizing electrolytes were leached from his bones. When your blood is low on electrolytes, your body goes digging for them.

Another study took a different approach, giving 46 obese individuals a daily electrolyte supplement over the course of a six week fast. The group lost, on average, 56 pounds “without producing severe electrolyte disturbances seen with other modalities.” In other words, their electrolyte levels remained largely normal.

Benefits of Electrolytes While Fasting

Any fast over 12 hours increases the likelihood of electrolyte deficiency. There are two main reasons for this:

Taking electrolytes during a fast can prevent deficiency. This has the following benefits.

You’ve probably heard of the keto flu. It’s a term for the low energy, headaches, fatigue, and malaise often experienced during the transition to a low-carb diet.

The same holds true for fasting. Like keto, fasting lowers insulin and causes considerable sodium loss. That sodium needs to be replaced. Specific recommendations are coming in the next section.

If you step on the scale a few days into a fast, you’ll likely see a lower number than expected. Sorry folks, this isn’t fat loss. It’s water loss.

Right. When you fast, your body breaks apart glycogen (stored sugar) to meet your brain’s ravenous glucose needs. This process, called glycogenolysis, releases torrents of water which you subsequently pee out. Your body weight decreases accordingly.

When you start eating again, glycogen reforms and the weight comes roaring back. Sodium supplementation dampens this effect, reducing the post-fasting weight gain to only 39% of the original amount lost.

During exercise, you lose sodium through sweat. Combine this with fasting-induced sodium loss and you have a strong case for supplementation.

For me, this one hits close to home. Just a couple years ago, I supercharged my Jiu-Jitsu performance by taking more electrolytes (especially sodium) in close proximity to training. Before fixing my sodium, I was struggling out there. I feared it was age-related. I’m glad I was wrong.

Another quick example. A good friend of mine recently took silver at the Pan Ams—the largest Brazilian Jiu-Jitsu tournament in North America. He reported that increasing his electrolyte intake gave him a gas tank like he’d never seen before.

Super anecdotal, I know, but worth chewing on. That said, let’s shift to a more scientific note.

Exercise-associated hyponatremia is a dangerous and sometimes fatal condition that afflicts—according to one source—around 15% of endurance athletes. The root cause is bad hydration advice. Heeding the battle cry of “drink more water,” athletes pound fluids beyond the dictates of thirst and end up diluting blood sodium levels.

Exercise-associated hyponatremia can be reversed, it’s been shown, by drinking a saline (salt water) solution. And so if you’re only drinking water—but not consuming electrolytes—during a fast, you may end up with low sodium symptoms.

How To Take Electrolytes While Fasting

Next I’d like to offer practical advice on getting sufficient electrolytes. I designed my protocol to provide a science-backed ratio of sodium, potassium, and magnesium. It may not hit your needs exactly, but it should get close.

I generally suggest people get 4–6 grams of sodium, 3.5–5 grams of potassium, and 400–600 mg magnesium[*][*] each day. Sodium varies a great deal with diet and lifestyle factors. If you exercise, eat a low-carb diet, fast, or some combination of those three, it’s likely you’ll need to bump up sodium well beyond that 4–6 gram territory.

You might be thinking that 4–6 grams of sodium sounds high. Isn’t salt bad for your heart? Not according to a 2011 paper published in the Journal of the American Medical Association (JAMA). In this large cohort study, those consuming 4–6 grams of sodium per day had fewer heart attacks and strokes than those consuming the government-recommended limit of 2.3 grams. Finally, 300 mg supplemental magnesium will meet basic requirements and can also help you relax during a fast.

My advice to help you hit those targets? First, perform a dietary analysis by logging your meals in a nutrition tracking app like Cronometer. See where you fall short and try to make up the difference with electrolyte-rich foods first and foremost. If you’re still not hitting your electrolyte targets (totally normal!) then supplement as needed.

As far as supplementation goes, you have two options:

To save time, powdery mess, and my taste buds, I prefer option B. That’s why we created LMNT, our science-backed electrolyte drink mix.

Whichever route you go, I hope you’ll incorporate electrolytes into your fasting regimen. Electrolytes can prevent discomfort and even boost your energy, keeping your fasting journey (and goals) alive.