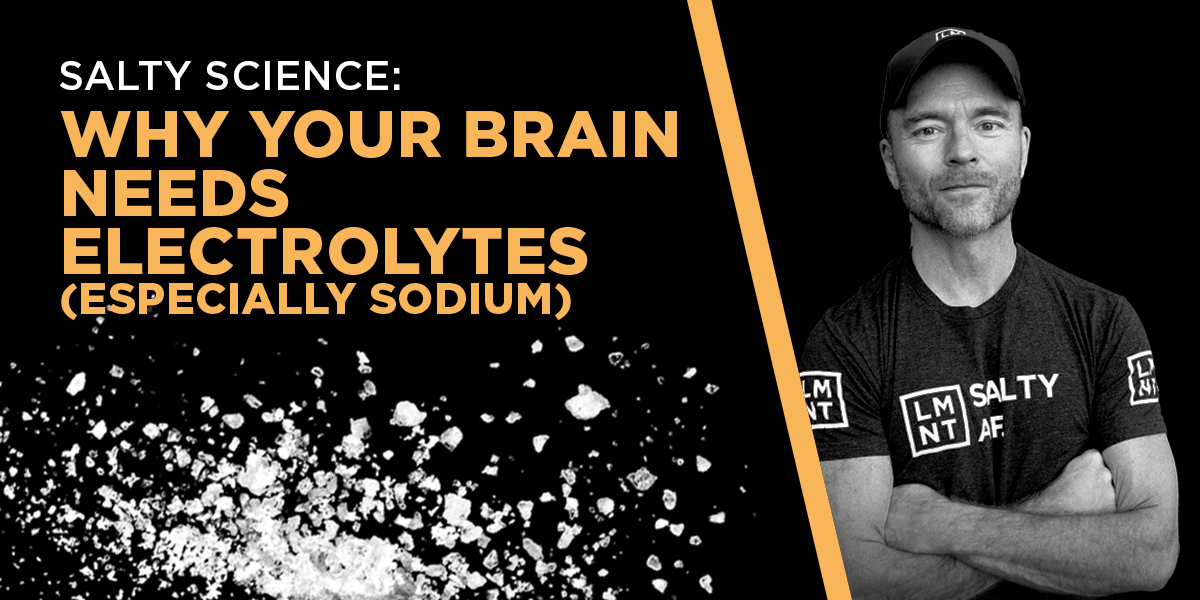 The brain is a delicate system. When the system is balanced, life is good. But when it becomes unbalanced, there are consequences.

The balance of this system, in part, depends on electrolytes—a handful of minerals that carry electrical charges, regulate fluid balance, and influence many other functions in your brain and body. One ramification of severe sodium deficiency, for instance, is a profound swelling of the brain. This unhappy condition is called cerebral edema.

Yet, even a mild sodium deficiency can cause cognitive symptoms. The symptoms, however, can be so subtle that many folks have no idea of the underlying problem. I see it all the time. Gee Robb, my energy just isn’t right. I feel weak on this low-carb diet, especially in the gym. I just can’t crush it anymore.

More often than not, this person is suffering the neuromuscular effects of electrolyte deficiency. With a meaningful bump in sodium intake, things tend to improve rather quickly. I learned this lesson the hard way. I lived for years with chronic low-sodium symptoms and didn’t even realize it. But when I increased my sodium intake, my physical and mental game took a noticeable turn for the better.

Today, I want to talk about how sodium and other electrolytes affect the brain. I hope you find it useful.

Electrolytes and Your Brain

Electrolytes are called electrolytes because they carry electrical charges between cells. In other words, these minerals facilitate the transmission of nerve impulses, immune signals, and many other communications throughout your body.

Where is the highest concentration of communications in the human body? That’s right. In the brain.

Brain cells, also called neurons, rely on electrolytes (especially sodium and potassium) to talk with one another. In the case of electrolyte deficiency, this crosstalk gets compromised.

But electrolytes don’t just conduct electrical charges. They also regulate fluid balance, or the amount of water inside and outside your cells.

Maintaining proper fluid balance is critical for brain health. Your brain, after all, is suspended in liquid inside your skull. And sodium, in particular, is a key determinant of cerebral fluid balance.

Of all the electrolytes, sodium is the most important for brain health. When sodium gets too low, a variety of symptoms result—from headache to fatigue to brain damage.

Normally, your body is fairly adept at preventing dangerously low serum sodium. All the time, specialized neurons called osmoreceptors are measuring the osmolality of your blood. (Osmolality simply refers to the balance of water and electrolytes in a given fluid, like blood.) When osmolality gets too low (i.e., when sodium levels drop), the osmoreceptors tell your brain to stop secreting antidiuretic hormone (ADH). Less ADH means you pee out more fluid, and the concentration of sodium in your blood is restored.

But sometimes, the situation changes too fast for your body to keep up. And when this happens, a dangerous low-sodium condition called hyponatremia can develop.

One consequence of hyponatremia is cerebral edema. When sodium levels rapidly drop, the brain swells with water. If this goes on long enough, the patient may suffer serious consequences.

What makes sodium levels drop like a stone? That’s up next.

Hyponatremia is a medical condition of low serum sodium. Early symptoms of hyponatremia include fatigue, nausea, headaches, muscle cramps, and malaise. As sodium levels continue to fall, the patient may become confused, suffer seizures, or in severe cases, die.

Here are the most common causes of hyponatremia:

Let’s focus on the last one, because it’s the most preventable. The truth is, many elite endurance athletes (15%, according to MDAlert) develop exercise-associated hyponatremia, in part by overwatering exercise.

This isn’t surprising, given the mass confusion regarding hydration. Thanks to widespread misinformation, people think that drinking more water is ALWAYS beneficial. So they drink and drink throughout exercise without adding back electrolytes.

Unfortunately, drinking salt-free water dilutes blood sodium levels and can result in serious neurological complications. There are at least 8 reported deaths from exercise-associated hyponatremia, as opposed to 0 deaths from sports-related dehydration (a lack of water), in the medical literature.

So exercise-associated hyponatremia is clearly a big issue for active people, especially folks that sweat a lot. The good news is: It’s been shown that drinking a salt-water solution can reverse this condition.

But what if your sodium deficiency is less pronounced? Does subclinical low sodium affect cognition too?

Most cases of sodium deficiency are milder than what’s described above. They hover in the background, barely noticeable for months or years. The sodium deficient individual may not even detect a problem.

That was more or less my story. I suspected my mental game was off, but I couldn’t be sure. It was only after bumping up my sodium to 4–6 grams per day (based on how much I sweat, consumed through my diet, etc) that I realized my brain hadn’t been running on all cylinders for quite a while.

In my view, there are three main drivers of subclinical sodium deficiency:

Very often, someone has all three factors working against their sodium status. An active person on a real food keto diet would qualify. If this sounds like you, read my deep dive on sodium.

I hope by now you’re thinking more carefully about your sodium intake. Let’s look at some other electrolytes now.

Other Electrolytes And Your Brain

While sodium is the key electrolyte for brain function, calcium, magnesium, phosphorus, and potassium deserve a mention too.

Ninety-nine percent of bodily calcium is stored in your skeleton. The rumors are true: calcium builds bone.

However, calcium also functions as an electrolyte. In other words, it helps your nervous system send messages.

When someone has low serum calcium (hypocalcemia), they may suffer cognitive symptoms like fatigue, depression, anxiety, and irritability. Hypocalcemia can also cause tetany, or involuntary muscle contraction.

Magnesium has many functions in the human body, and most of them aren’t related to electricity-conduction. Nonetheless, magnesium deficiency has dire consequences for the nervous system, including:

Magnesium can also have a relaxative effect. Some research has shown that magnesium supplementation reduces stress and anxiety in vulnerable populations, but better controlled studies are needed on the topic. Shoot for 400–600 mg magnesium per day and you’ll be in a good spot.

Phosphorus, or phosphate, is found in DNA, muscle, bones, and energy (ATP). When someone is phosphate deficient, they may suffer neuromuscular problems like muscle weakness, tremors, and respiratory dysfunction. In severe cases, coma or seizures can result.

But since phosphates are abundant in the food supply, deficiency is rare. In fact, Americans consume too much phosphorus—a dietary pattern linked to increased fracture risk.

What explains this? I believe it has to do with blood pressure.

As you might be aware, potassium balances sodium’s ability to increase blood pressure, even in “salt sensitive” individuals. In general, higher potassium intakes correlate with lower blood pressure.

Here’s the thing. Keeping blood pressure low is super important for minimizing the risk of Alzheimer’s and other forms of dementia. (High blood pressure damages microvessels in the brain). For this and other reasons, I recommend folks strive to get 3.5–5 grams per day of potassium. Prioritize food sources, then supplement your shortfall.

Recap: Electrolytes for Your Brain

Okay, that was a lot of info. As a refresher, here are the main points we covered today:

Want to get enough electrolytes from foods and supplements? Take 5 minutes and read our detailed guide: Electrolyte Rich Foods (And When To Supplement).