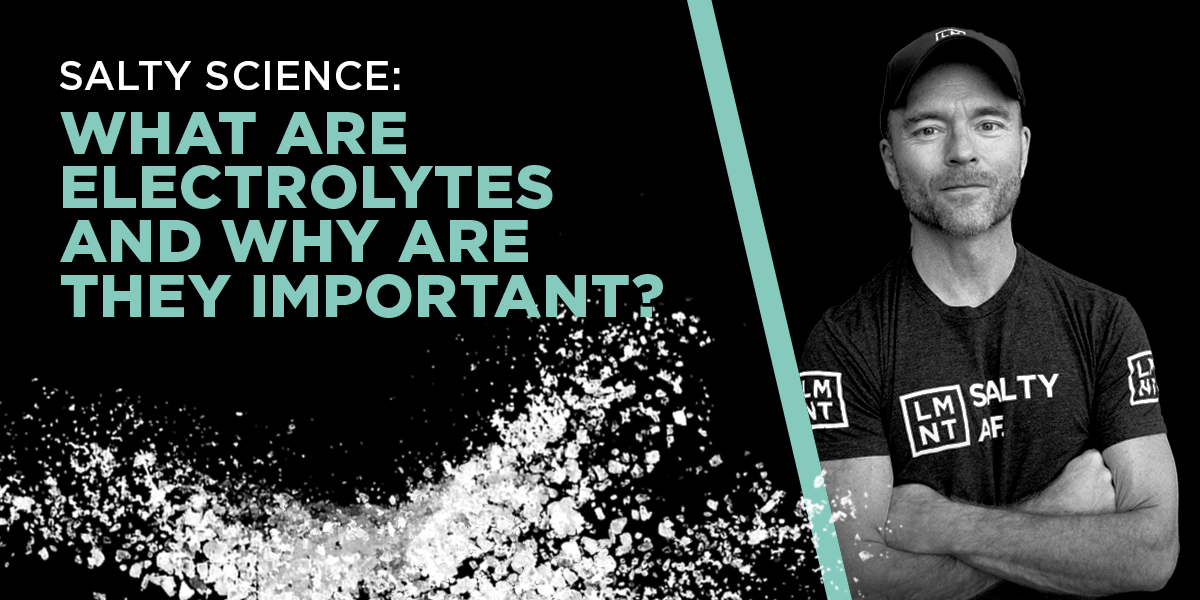 What are electrolytes and why are they important?

From the desk of
Robb Wolf
Science → What are electrolytes and why are they important?

If you’ve been following me lately, you know I’m a big fan of electrolytes. These minerals can mean the difference between feeling like a champ and feeling like garbage.

I still remember how I felt a few years ago, back when I was low on electrolytes during my jiu-jitsu training. When I started supplementing more aggressively (especially with sodium), my energy came roaring back. It was like night and day.

Since then, the word has gotten out on electrolytes, and I’ve been deluged with questions on the topic. Low-carb folks, in particular, are keen on using electrolytes to prevent keto flu.

Other folks want to know if electrolytes can improve athletic performance, prevent muscle cramps, or reduce fatigue. That depends. Electrolytes aren’t a cure-all. But chances are, if you’re active, low-carb, or both—you need more sodium, potassium, and magnesium in your life.

Today’s article is your guide to electrolytes: What they are, why you need them, and how to get more of them. Let’s dig in.

Every message sent through your nervous system (including your brain) involves electrical transmissions—or nerve impulses—between nerve cells. You need electrolytes, especially sodium and potassium, in order for nerve impulses to fire.

Electrolytes have other functions too. They regulate fluid balance, help you produce energy, and strengthen bones. I’ll cover some of these functions later.

The main electrolytes are sodium, potassium, magnesium, calcium, chloride, bicarbonate, and phosphate. Based on the latest nutritional evidence, folks tend to be deficient in sodium, potassium, and magnesium— so I’ll zoom in on them in this article.

The ebb and flow of electrolytes in the human body is complex, but to simplify: You lose electrolytes through sweat, urine, and feces—and replace them through diet and supplementation.

Generally, the kidneys keep a tight leash on blood electrolyte levels. For example, if you consume too much salt, your kidneys will get the message and pee out the excess sodium, and balance is restored.

Nonetheless, your kidneys can’t always maintain balance if you are consuming too little of any electrolyte. Drinking too much water and living a low-carb lifestyle—to name two situations—can result in electrolyte imbalances. These situations require extra attention.

I’ll get there soon, but first I want to go into a bit more detail on sodium, potassium, and magnesium.

Sodium is an essential mineral with many functions in the human body. Sodium:

According to the FDA, Americans consume the vast majority of dietary sodium through packaged foods. Only about 11% comes from added salt. Whole foods also contain a bit of sodium, but it’s not enough to meet daily needs.

Potassium is the yin to sodium’s yang. Combined, these two electrolytes are important for:

But here’s the thing… less than 3% of Americans consume the FDA-recommended amount of 4.7 grams per day. The 4.7 gram recommendation isn’t arbitrary. There’s good evidence that higher potassium intakes can mitigate high blood pressure or hypertension. Personally, I recommend you get between 3.5–5 grams potassium each day based on this data, and dial upward whenever possible.

You may need to supplement (I’ll cover this later), but I recommend you meet your potassium needs through diet first and foremost. This means eating lots of fruits and vegetables. Good sources include:

I haven’t forgotten about magnesium, another electrolyte most folks are deficient in. It’s often referred to as the relaxation mineral, but carries benefits far beyond reducing stress and anxiety.

The best dietary source of magnesium is dark leafy greens like spinach and chard. When I supplement with magnesium, I opt for magnesium malate. Other forms, such as magnesium citrate, can function as a laxative and result in “disaster pants”.

If you’re electrolyte deficient, you won’t feel your best. It’s like being low on motor oil. You can squeak by for a while but eventually the affair culminates in a tow truck, a missed dinner reservation, and an ungodly repair bill.

This is a problem I’m keen to shine a spotlight on. On that note, let’s review the major causes of electrolyte deficiency beyond simply under consuming vital electrolytes through your diet. (Quick note: I won’t discuss chronic medical problems, like kidney disease, that cause electrolyte imbalances. These problems require medical attention, and you should consult your doctor about them).

Many endurance athletes believe that drinking more water is always healthier, ad infinitum, thirst be damned. Because of this, countless people guzzle large volumes of H2O before, during, and after events.

Unfortunately, excessive water consumption can dilute blood sodium levels, causing a dangerous condition called hyponatremia. Mild hyponatremia shows up as muscle cramps and fatigue, but as sodium levels continue to drop—confusion, seizures, brain damage, and even death can result. A surprising number of endurance athletes suffer from this condition. (13-15%, by one estimate.)

Here’s the thing. You do need to replace water after exercise, but you also need to replace sodium. Fortunately, as one study showed, drinking a saltwater solution can reverse exercise-associated hyponatremia.

I’m a big believer in whole foods. It makes me happy when folks reject processed and refined foods.

However, eliminating processed foods from your diet will lower sodium intake. A whole foods diet, being naturally low in salt, requires liberal salting to meet basic sodium needs. Yet, most people aren’t so aggressive with the shaker because we have (incorrectly) been taught that sodium is bad for us. More on this topic later…

Getting enough potassium and magnesium, on the other hand, is more about eating fruits, nuts, and vegetables, and even animal proteins like chicken, beef, fish etc… Anything green and leafy (like spinach) is generally a good source of both minerals, but you need to wolf down a TON of greens to hit your numbers.

Meeting potassium needs can be difficult on low-carb diets, which restrict potassium-rich foods like fruit and potatoes. More on this next.

And sodium, well… sodium gets doubly depleted on keto: You eat less of it PLUS you urinate more of it out.

A low-insulin, low-carb state tells your kidneys to excrete more sodium. Because of this, low-carb folks like me must take active steps to avoid sodium deficiency.

In fact, low sodium explains why many keto dieters get the headaches, malaise, irritability, fatigue, and mood swings known collectively as the “low-carb flu” or “keto flu”. The truth is, the keto flu isn’t a rite-of-passage that all keto dieters must suffer through. It’s often just a case of low sodium. Fix the sodium deficiency and you often fix these symptoms.

But wait. Isn’t eating more salt bad for your heart?

The US government recommends limiting sodium intake to 2.3 grams per day. This is ostensibly to reduce the risk of high blood pressure, or hypertension. For salt sensitive folks with an impaired ability to excrete sodium, this recommendation is probably a good one.

But most people aren’t salt sensitive. In fact, researchers analyzed 2,632 normotensive (normal blood pressure) people from the Framingham study and found that higher sodium intakes (above 2.5 grams per day) were linked to lower blood pressure. Hm.

I should also mention that a 2011 study from the Journal of the American Medical Association (JAMA) followed 28,880 folks over seven years. The researchers found that—counter to conventional wisdom—people limiting sodium to under 3 grams per day (measured by sodium excretion) suffered more cardiac events than those consuming 4 to 6 grams sodium per day. In other words, 4–6 grams sodium per day was the sweet spot for heart outcomes.

How To Get Enough Electrolytes

Sodium, potassium, and magnesium are the three electrolytes folks tend to be most deficient in.  According to the published evidence, most people should shoot for 4–6 grams sodium, 3.5–5 grams potassium, and 400–600 mg magnesium per day in total. To wrap up, I’ll give you some tips to dial in your electrolytes so you can feel your best.

Keep in mind that particular diet and lifestyle factors increase your odds of electrolyte imbalances and deficiencies.

Pro tip: your body knows when you need salt. If you take a sip of LMNT, bone broth, or something else salty and it doesn’t taste great, you’re good on sodium for the time being. But if you work out, sit in the sauna for a while, or exercise, I’m willing to bet that extra sodium will suddenly taste amazing.

Electrolytes can make a big difference in how you feel, so pay attention. If you’re experiencing headaches, fatigue, muscle cramps, low-energy, or the low-carb/keto flu—you might simply be low on electrolytes. And when you take a sip of LMNT, you’ll feel the difference immediately.