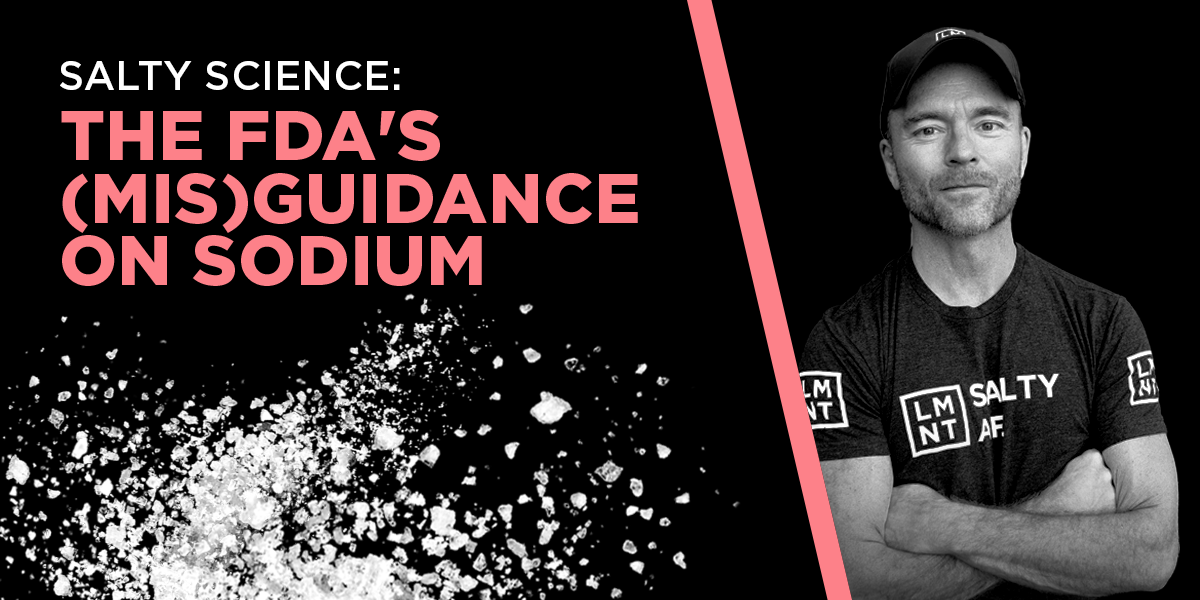 The FDA’s (mis)guidance on sodium

If you’ve been watching the news in recent months, you might have seen that the FDA launched another attack in their perpetual war on salt. If the US government had its way, we’d all consume fewer than 2.3 grams of sodium per day. According to the FDA, a low-salt diet would reduce our collective risk of heart disease and save hundreds of thousands of lives.

If that were accurate, then all aboard! Sounds great to me. But as you’ll see, this recommendation is far off the mark. When you really drill into these claims, you come back empty-handed. You find papers that cherry-pick epidemiology and make absurd assumptions to defend salt restriction.

I’ll concede that sedentary people who eat an ultra-processed diet tend to consume more salt on average, and that they tend to suffer worse health outcomes too. But against the backdrop of the population studies I just referenced, it’s pretty clear that salt isn’t the culprit influencing these poor outcomes—it’s the ultra-processed diet combined with a sedentary lifestyle.

And why did the FDA neglect even once to mention the dangers of sugar in its guidance to the food industry? A high-sugar diet (combined with inactivity) is a recipe for obesity and diabetes. The more people overeat, the more weight they gain, the higher their risk for metabolic disaster and heart disease. The science is clear on this point, and it’s no secret that sugar is both calorically dense and hyperpalatable.

So why is salt blamed for the epidemic of diet-related illness instead of sugar? Perhaps it’s because the sugar industry receives billions of dollars per year in government subsidies. Money talks. Well, science and data talk too. And I plan to amplify their voice loud, clear, and salty today. Let’s get into the FDA’s (mis)guidance on sodium.

The New FDA Guidance on Salt

The “new” part is that food manufacturers and restaurants are being asked directly to significantly reduce sodium in the food supply. To be clear, this isn’t a requirement, but a strong suggestion.

According to the FDA, the average American consumes 3.4 grams of sodium per day. The goal of these measures is to reduce it to 3 grams per day.

Assuming food companies comply, the measures might succeed in reducing sodium intake. After all, the bulk of sodium in the American diet does come from outside foods, not the salt shaker at home.

The FDA’s case, by the way, rests on “strong scientific evidence” that salt restriction reduces blood pressure. The reduction in blood pressure, in turn, is supposed to lower our collective risk of heart attack and stroke. If their report is to be believed, sodium restriction in line with government recommendations will save up to 500,000 lives over ten years.

But when you double click on these claims, you find vigorous conjecture, unfounded assumptions, and aggressive extrapolation. The 500,000 lives figure, for instance, is partly based on data from anti-hypertensive drug trials. The assumption—and I’m not making this up—is that the success of blood pressure meds in clinical trials should serve as a proxy for the possible success of sodium reduction.

Hm, we know that hypertensive drugs work. Let’s attach the low sodium cart to that horse and then claim it will save lives. That appears to have been the thought process.

The remainder of the FDA’s evidence was carefully chosen to make their case. Hypertensive people, for instance, are more likely to be salt-sensitive due to insulin resistance, kidney issues, and other factors—so those were the populations they looked at.

We’ll return to salt and blood pressure throughout this article. Right now, though, let’s reflect on how this confusion began.

How The War on Salt Began

The US Dietary Guidelines were first published in 1980. There were a few good recommendations (like encouraging sugar avoidance), but the document also admonished us to avoid fat, saturated fat, cholesterol, and—yes—salt.

The anti-salt edict was based mostly on research from the 1960s. Back then, a scientist named Lewis Dahl found that giving rats about 150 times the human-equivalent daily dose of sodium gave them high blood pressure. His findings made sense. A huge hit of sodium will raise blood volume and blood pressure, but it says nothing about normal human intakes of salt.

Along with Dahl’s data, the FDA also found a few observational data points to support the “salt is bad for blood pressure” hypothesis.[*][*][*]

This paper-thin case has been used for decades to justify low-sodium recommendations. Today they recommend capping daily sodium intake at 2.3 grams—an intake likely to cause sodium deficiency in most people, particularly athletes.

High blood pressure is a primary risk factor for heart attack, stroke, dementia, and other poor health outcomes related to the vascular and cerebrovascular systems. We want to avoid it whenever possible.

The FDA says lowering salt intake will accomplish this goal. Their entire argument hinges on it.  I already talked about the FDA’s supporting evidence. It’s based mostly on epidemiology and conjecture.

When you look at the whole picture, the narrative changes. Consider the following:

If low sodium diets were good for your heart, you would see it in the data. But I haven’t seen it, and I’ve spent so much time with the data that my family hasn’t seen me since last February when I briefly emerged to grab a cup of coffee and a handful of macadamia nuts.

Just kidding, but you get the idea. My point is: the literature on sodium is extensive and mostly unsupportive of the FDA’s views. Some examples will help illustrate.

In a 2011 study published in the Journal of the American Medical Association (JAMA), researchers looked at salt intakes and hard heart disease outcomes (heart attack, stroke, death) in 28,800 high-risk heart disease patients. They found that the lowest risk for bad outcomes—the “sweet spot,” if you will—was between 4 to 6 grams of sodium per day. People restricting sodium had a 19% higher risk of cardiovascular death than those in the sweet spot.

This doesn’t mean we should consume unlimited sodium. Too much sodium isn’t optimal either. But most people need at least 4–6 grams of sodium per day. (More if they’re active or eat a ketogenic diet.) So what happens when you’re light on sodium?

The Problem With Low Salt Diets

When you don’t get enough sodium, your body goes into sodium retention mode. You release sodium retention hormones (aldosterone, renin, angiotensin, and norepinephrine) that make your kidneys retain sodium.

Unfortunately, these hormones also raise blood pressure. Why do you think sodium restriction is linked to elevated blood pressure in healthy people? It’s those pesky hormones. This seems counterintuitive, doesn’t it? Welcome to complex systems!

Osteoporosis is another consequence of a low salt diet. Your bones serve as a sodium reservoir—and when you limit salt intake, your body pillages that reservoir of not just sodium, but also calcium and magnesium.

Then there are the outward low sodium symptoms. I’m talking about the low energy, headaches, muscle cramps, fatigue, weakness, insomnia, and malaise so common in folks on whole foods diets who do not consume adequate sodium.

You may have heard of keto flu—it’s characterized by a lot of the symptoms I listed above. Yeah, that’s typically just a sodium issue.

I’m not saying sodium is a cure-all. It’s not. But most people—especially active, health-conscious folks—need more salt to feel and perform their best.

The Truth About the Salty Science

The FDA paints salt as a villain but, be it intentionally or neglectfully, they’re not representing the best scientific literature we have very well.

The science says that salt restriction is ineffective for lowering blood pressure and leads to side effects you don’t want. It also says the sweet spot for sodium intake is at least double what the government recommends.

The FDA’s war on salt is costing us. Not only does demonizing salt divert our attention from finding real solutions to our health crisis (e.g. studying the consumption of hyperpalatable foods), but it also fosters unhealthy fear of an essential mineral. Please share this article to someone who needs to see it. Help me push back so we can help the world stay healthy, salty, and sane.