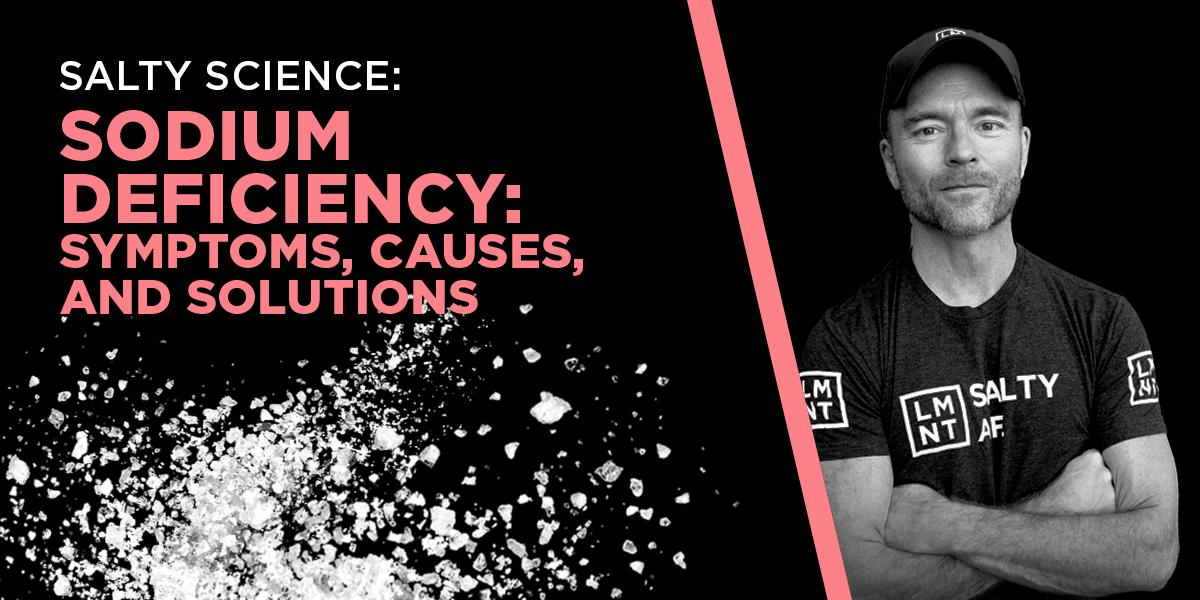 From the desk of
Robb Wolf
Science → Sodium deficiency: Symptoms, causes, and solutions

Sodium deficiency can be a subtle yet frustrating problem. You might feel “off” during a workout, foggy during a work task, or low energy throughout the day.

How widespread is sodium deficiency? In the active, low-carb, and health-conscious folks I’ve worked with, it’s almost ubiquitous. Health-conscious people are frequently light on sodium because not only do they believe that salt is bad for your heart, but they also live lifestyles that accelerate sodium losses.

It’s a combo that leads to harsher sodium deficiency symptoms, but the problem is hardly recognized for what it is. Most of the time, folks don’t blame low sodium for these symptoms. Instead they blame sleep problems, stress, or dehydration.

Part of my mission as a health educator is to redirect the conversation around this topic. We need to get the message out: many people who are currently eating salt-restrictive diets need more sodium, not less. When sodium-deficient folks make salt a priority, they feel and perform better. It happens so quickly that they can usually feel the difference within mere minutes.

It happened to me a few years back. At the time, I was dragging through my jiu-jitsu workouts in a low sodium funk. When my former coaches recommended salty electrolyte homebrews, I ignored them (like all the best athletes do). About a year later, I finally listened and my energy came roaring back. It’s not like I suddenly became Marcelo Garcia, but I did rediscover that “low gear” is necessary for grappling and combatives.

But enough about me. Today I want to cover the details of sodium deficiency so you can prevent it from happening to you.

The Need for Sodium

When people say that sodium is bad for you, my ears bleed a little bit. Sodium is an essential nutrient. If you don’t consume it, you’ll have health problems. At extreme levels of deficiency, that could mean death.

Another set of problems involve energy and energy production. Sodium is required for sodium-potassium pumps (proteins found in every cell) to utilize energy as ATP. Why do you think fatigue and lethargy are such common symptoms of sodium deficiency?

And then there’s the bone density issue. Your body stores sodium in bone, so that’s where your body tends to pull from when you don’t get enough. Unsurprisingly, low sodium diets have been linked to osteoporosis because when we tap into stored bone sodium, we also extract calcium.

What Is Sodium Deficiency?

To be sodium deficient means you’re not consuming enough sodium to meet your individual sodium needs. It’s related to, but not the same as, a sodium imbalance.

Low serum sodium is a serious problem, especially among endurance athletes. Check out my blog on hyponatremia to learn more.

But a simple sodium deficiency will not show up on a lab test. Why? Because even when you play hide-the-salt-shaker, your body works hard to maintain serum sodium levels.

The takeaway? Beyond looking at salt intake (I’ll cover that soon), you must identify sodium deficiency by its symptoms. So what do they look like?

The most common symptoms of sodium deficiency include:

To be clear, sodium deficiency is distinct from hyponatremia. But being sodium deficient does increase one’s risk for developing low serum sodium. The trick to preventing both conditions is to consume enough salt to support your diet and lifestyle.

I’ll share practical tips to accomplish that goal at the end of this blog. First, though, let’s consider why so many people are sodium deficient.

Of all the electrolytes, sodium is the most neglected by health-conscious folks. Here are four reasons why.

Herb, drop that salt shaker! It’s bad for your heart!

Well-meaning Americans have been uttering words like these since 1980. That was the year the government began explicitly warning us to “avoid too much sodium.”

This anti-salt admonition (which still stands today) was based primarily on research from the 1960s—research that found salt-sensitive rats developed high blood pressure when injected with supraphysiological levels of sodium.

But since most of us aren’t salt-sensitive rats, I prefer to look at the human data. Consider that:

Nonetheless, people still fear the salt shaker. In my view, this irrational fear is the top cause of sodium deficiency.

When someone goes keto or paleo, their intake of processed food plummets. This is mostly a good thing, but it also eliminates most of their dietary sodium.

And so people eating a whole foods diet REALLY need the salt shaker to meet their sodium needs. But because people fear salt, most folks don’t shake it enough.

This problem is compounded by a quirk of physiology: low-carb diets cause humans to excrete sodium like a firehose shoots out water. Why? Because low-carb diets keep the hormone insulin low, and low insulin signals the kidneys to stop reabsorbing sodium.

A similar sodium depletion occurs during fasting. It’s called the natriuresis of fasting, and it’s why clinicians keep the saline drip handy during medically supervised fasts.

You can see where I’m going with this. When you combine lower intakes of sodium with higher excretion, you have a recipe for sodium deficiency.

You’d be surprised how much sodium is lost through sweat. An NHL team I work with reported their larger players lose up to 10 grams in a single training session—about 5 teaspoons of salt.

Sodium needs during exercise are largely a function of sweat loss. Here are the main factors that influence sweat loss:

When sodium isn’t sufficiently replaced during or after exercise, sodium deficiency soon follows.

You lose both sodium and water through sweat. Most people, however, only replace the water.

This is an artifact of 8×8, the oddly persistent homespun wisdom that states we should drink eight glasses of water per day for good health. There’s no evidence supporting the 8×8 rule, but it’s still widely believed.

Endurance athletes are the most visible victims of overhydration. Encouraged by organizations like the ACSM, many athletes drink on a set schedule to prevent mass loss from dehydration.

But it’s been shown that athletes perform perfectly well in a dehydrated state. Also, as I’ve pointed out before, there are zero deaths from sports-related dehydration in the literature.

The real problem is a lack of sodium combined with excessive fluid intake. And now that we’ve identified the problem, the solution is obvious.

How to Prevent Sodium Deficiency

To prevent sodium deficiency, simply consume enough sodium to support your diet and lifestyle. For most people, a good baseline is 5 grams per day—which is around 2.5 teaspoons of salt.

But the 5-gram baseline doesn’t account for sweat loss or low-carb dieting. If you’re active and low-carb, you may need to double that.

Calibrate your dose by monitoring symptoms at different sodium intakes. How’s your energy, mood, and exercise performance at 5, 6, or 7 grams per day? You’ll need to do some tinkering.

To bump up your sodium, keep the salt shaker close. Salt your food aggressively and consider salting your water too.

You can also use LMNT (our tasty electrolyte drink mix) to add sodium, magnesium, and potassium to your water. It has a full gram of sodium per stick, so 1-2 of those daily can get most folks to home base.

And when you add sodium to fluids, you don’t need to worry about overhydration. Drinking salty water prevents blood sodium levels from dropping.

In most cases, however, I recommend simply drinking to thirst. Just give your body what it’s asking for. For people with functioning thirst mechanisms, thirst is a great indicator.

And if you’re craving salt, grant your body that wish too. It’ll thank you with better energy and fewer low sodium symptoms.