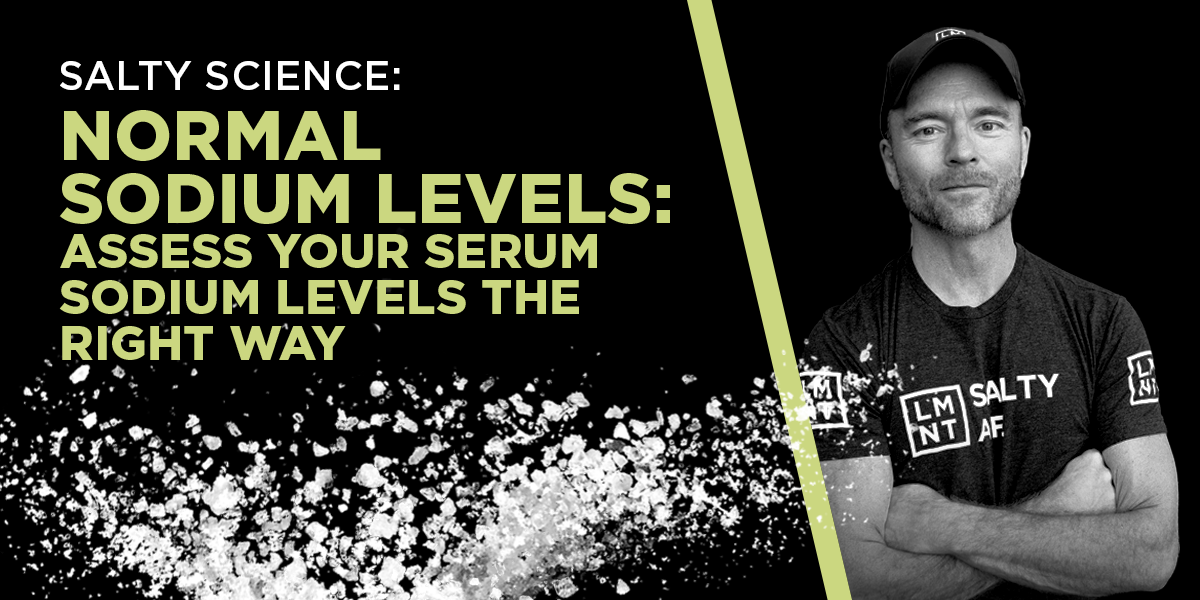 Here’s a common scenario. Someone gets their biannual bloodwork, sees normal sodium levels, and concludes that everything is peachy. It’s a serum sodium test. It confirms your sodium status, right?

Not exactly. While a normal result rules out hyponatremia (low serum sodium) and hypernatremia (high serum sodium), it doesn’t rule out sodium deficiency. In fact, it says absolutely nothing about it.

Oddly enough, you can be deficient in sodium and it won’t show up in the lab work. That’s because the electrolyte panel records a snapshot of your blood at a particular moment, not your total intake and excretion of electrolytes day after day.

So, how can you tell if you’re deficient? You’ll feel it in your sleep, mood, energy levels, and physical performance. That is, if you’re paying close attention to your diet and lifestyle. Most people don’t suspect inadequate sodium is making them tired, cramped up, or irritable. They often have an in-range lab result, plus many have been led to believe that less salt is better.

But here’s the thing: salting healthy foods won’t provide the sodium needed to fuel the average person, much less the sweaty athlete or low-carb aficionado. No, a more conscious effort to incorporate sodium into your diet is required.

Again, your body has a tightly regulated system to maintain healthy blood sodium levels. And it’s quite difficult to disrupt, but it can be disrupted. So in this article, I’ll cover how hyponatremia occurs and how to prevent it, but I’ll also explain how sodium deficiency is different, how to assess sodium status, and how to stay salty. Let’s dive in.

What Are Normal Sodium Levels?

Normal sodium levels are generally considered to be between 135 and 145 milliequivalents per liter (mEq/L). This range will vary from lab to lab, but not too widely.

On the other end (above 145 mEq/L) is a high serum sodium condition called hypernatremia. It’s less common than hyponatremia, but it still afflicts populations prone to dehydration.

Both hyponatremia and hypernatremia are serious medical conditions. Both are common in hospitalized patients with kidney issues, heart issues, or a script for diuretics.

Right now, I want to spend a moment on the extremes: when blood sodium levels rise and fall precipitously.

What Causes Sodium Levels to Fall?

Sodium levels fall when your fluid balance system gets disrupted. Normally this system is on point, but a handful of conditions, medications, and lifestyle practices can throw it off.

For instance, any condition that disrupts heart or kidney function can cause fluids to amass in the body, diluting blood sodium levels. That’s why heart and kidney failure are leading causes of hyponatremia.

Other conditions that may cause hyponatremia include:

On to medications now. Diuretics, antidepressants, pain pills, and other drugs can alter kidney function (or hormones influencing kidney function) and cause an electrolyte imbalance.

Finally, lifestyle factors. If you want to see otherwise healthy people with hyponatremia, just visit the finish line of a marathon.

Why there? Because many elite endurance athletes over-hydrate with plain water during the race, saturating their blood with sodium-free fluids. Then they stumble across the finish line in a lethargic, low sodium funk.

Elite endurance athletes provide a chilling exhibit of the dangers of hyponatremia. Many have perished from this preventable condition.

Most don’t perish, but around 13-15% show the signs and symptoms. These competitors are often treated with IV saline by on-site medical staff.

The symptoms of moderate hyponatremia (120 to 135 mEq/L) include:

As sodium levels fall below 120 mEq/L, the symptoms become more serious and include:

Fortunately, preventing and treating exercise-associated hyponatremia (the type of hyponatremia caused by overhydration) isn’t super complicated. Drinking electrolyte water to thirst is a simple and effective prevention strategy. As for treatment, drinking saline (salty water) has been shown to work just as well as IV saline.

When Sodium Levels Get Too High

When sodium levels get too high, it’s called hypernatremia. Hypernatremia is mostly a problem for infants and the elderly, but it can also occur in hospitalized patients.

The main cause of hypernatremia is dehydration (net water loss). To develop hypernatremia, water losses must exceed sodium losses from the blood. This hypertonic dehydration can result from inadequate water intake, excessive sweating, diarrhea, vomiting, or medications.

Hypernatremia presents similarly to dehydration: cramps, thirst, irritability, dry skin, and dark urine. In more severe cases, it can cause lethargy and coma.

High serum sodium is typically remedied by administering extra fluids over 48 to 72 hours. Easing down sodium levels prevents the brain from swelling up like a water balloon.

Elders are more likely to develop hypernatremia due to issues regulating thirst, medication usage, and impaired mobility. But to be clear, seniors can also develop LOW sodium levels due to overhydration.

This is a crucial point. Dehydration and hypernatremia are rare in healthy folks. Widespread calls to drink more water ensure most people get enough fluids.

Normal sodium levels do NOT reflect your overall sodium status. They merely suggest that your fluid balance system is working properly.

This system is designed to keep sodium levels within a tight range. Some examples of the system’s brilliance now:

My point is simple. You can have negative impacts from sodium deficiency while showing a “normal” result on a blood test. Given that fact, how do you assess sodium status?

How To Assess and Optimize Sodium Status

Let’s assume for the moment that you have normal serum sodium levels. What next?

First, use an app like Cronometer to determine how much sodium you consume daily. If you’re eating a whole foods diet, you’ll mostly be logging your salt shaker usage.

I recommend shooting for a baseline of 5 grams of sodium per day. That’s the intake linked to the most favorable cardiac outcomes in high-risk patients.

Calibrating your optimal sodium intake may take some trial and error. It’s important to monitor how you feel, then adjust accordingly.

If you’re experiencing low energy, brain fog, muscle cramps, headaches, or fatigue—you could be sodium deficient. Bump it up by salting food more vigorously and mixing 1-2 tasty sticks of LMNT into your water bottle.

Always thirsty despite drinking plenty of fluids? You might be overdoing the sodium. As you’ll recall, thirst is triggered by rising sodium levels. Try backing off the salt a bit and see if the thirst dissipates.

That’s why we made LMNT so salty. Health-conscious people tend to need significantly more dietary sodium to feel and perform their best.

And remember, there’s no lab test for a dietary sodium deficiency. Keep that in mind next time you or a loved one goes in for blood work.