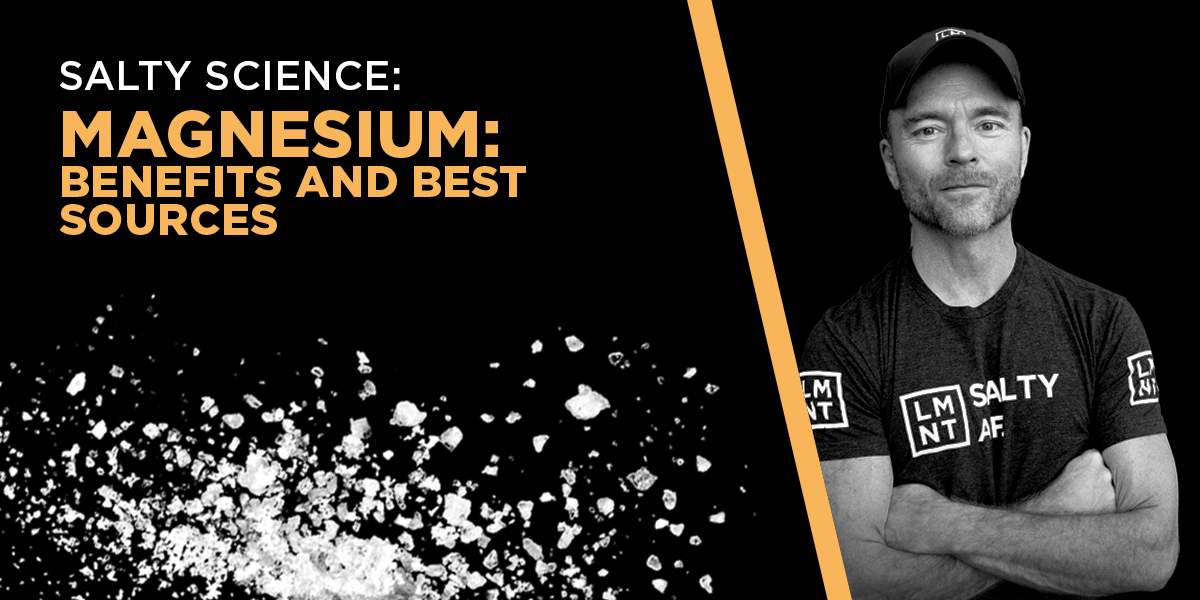 From the desk of
Robb Wolf
Science → Magnesium: Benefits and best sources

When assessing a person’s nutritional status, I look at magnesium in the first thirty seconds. Why? Because deficiencies in this mineral careen into every aspect of human health.

Being low in magnesium is linked to muscle cramps, heart problems, brittle bones, inflammation, diabetes, depression, insomnia, and much more. With about 30% of people being magnesium deficient, this is a widespread problem.

I’m not saying optimizing magnesium status will solve the world’s health issues. It won’t. It’s just a small piece of the puzzle.

But getting enough magnesium through diet and supplements is low-hanging fruit in the quest to extend healthspan. It pays to pick it.

Compare getting enough magnesium to getting enough sleep, for instance. Both are critical for health (sleep probably more-so), but one is much harder to pinpoint causes of and find solutions for than the other.

Sleep is the harder one. (Thanks, Captain Obvious!).

Getting enough sleep means minding light exposure morning and night, zealously defending your bedtime, minimizing nighttime thirst, making sure you eat enough calories, keeping the room dark and cool, and a long list of other behaviors that aren’t always easy to carry out.

Getting enough magnesium, on the other hand, is simple. Just do a dietary assessment, bump up electrolyte-rich foods, and supplement to make up any shortfalls. I’ll explore this more thoroughly at the end of the article.

First, though, I want to give magnesium its due. I’ll talk about what it is, why it’s beneficial, and how to consume it in food and supplements. Cool? Cool.

Magnesium is one of those minerals that defies a one-sentence description. It has hundreds of functions in the human body, including serving as a cofactor for more than 300 enzymatic reactions.

Some of these reactions facilitate the production of adenosine triphosphate (ATP), the energy molecule that powers all living things. And so without magnesium, we couldn’t produce usable energy from fatty acids, glucose, oxygen, and other materials.

Magnesium is technically an electrolyte (a charged mineral), but most of its functions are unrelated to electrical conduction in the human body. Note: the main electrolytes that fulfill this function—allowing cells to communicate—are sodium, chloride, potassium, and calcium.

Magnesium is swamped with other jobs—jobs like regulating heartbeat, structuring bone, balancing neurotransmitters in the brain, and tamping down runaway inflammation. We’ll cover these benefits in more detail soon.

The importance of magnesium becomes obvious when you don’t get enough of it. Here are the symptoms of magnesium deficiency:

If you aren’t sold on magnesium yet, I think you will be after reading this section. Seeing the science-backed benefits tends to have that effect.

I believe optimizing magnesium status should be part of that approach.

First, when someone is magnesium deficient, they’re more likely to be chronically inflamed. This is bad news for the heart. An excess of inflammatory particles drives atherosclerosis, the process by which plaque develops in the arteries.

Magnesium also influences other aspects of cardiovascular health like calcification, clotting, and blood vessel relaxation. These functions are central to the development (or prevention) of heart disease.

Recall that magnesium is required for the production of ATP, the energy coin that powers your body. Since ATP powers your muscles, it follows that supporting ATP production also supports strength.

This doesn’t mean that supplementing magnesium automatically increases strength. The effect may only hold when correcting a deficiency.

Still, since magnesium deficiency is fairly common, I suspect many people would benefit from getting more magnesium. One study, for example, found that 18 to 30-year-olds taking magnesium had greater strength gains after resistance training than controls.

About 60% of the magnesium in your body is stored in bone. When you don’t get enough magnesium, your body starts to pillage bone to meet its needs.

Observationally, both potassium and magnesium intakes are positively correlated with bone density in older adults. Higher intakes, better density, stronger bones. This effect (for magnesium at least) also holds for women with osteoporosis.

One of magnesium’s many roles is to improve the function of insulin, your blood sugar boss hormone. Magnesium helps insulin shuttle glucose out of your blood and into muscle and liver cells for safe storage.

When someone has type 2 diabetes, this blood sugar regulation system doesn’t work properly. Blood sugar either stays in the blood (leading to dangerously high blood sugar) or gets stored as fat. This is called insulin resistance.

Magnesium may help. In one meta-analysis with 286,668 participants, higher magnesium intakes were linked to lower diabetes risk. The authors estimate that for every 100 mg of magnesium per day, the risk of diabetes goes down by 15%.

Magnesium is well-known to promote relaxation. Researchers believe this effect is driven by magnesium’s suppressive effect on glutamate (an excitatory neurotransmitter) in the brain.

Suppressing glutamate also increases levels of GABA, an inhibitory (read: relaxing) neurotransmitter. Through these pathways, optimizing magnesium may help with anxiety and depression. Consider that:

More research is needed, but it’s worth thinking about magnesium for these conditions now. It’s low risk and high reward.

Two clinical studies suggest that magnesium can help with sleep:

Magnesium is a friend to the immune system. Magnesium deficiency is not.

We already discussed how low magnesium is linked to chronic inflammation. This systemic, low-level immune activity is linked to pretty much every disease in the book—including aging itself.

Magnesium also supports the proper function of apoptosis, or programmed cell death. This is a good thing. Apoptosis helps destroy damaged cells before they become cancerous.

Finally, taking magnesium has been shown to improve the symptoms of asthma—an inflammatory disorder that constricts airways and impairs breathing.

The best dietary source of magnesium is green leafy vegetables. Magnesium sits at the center of the chlorophyll molecule, so if it’s green—and it’s not Mountain Dew—it’s probably rich in magnesium.

Other magnesium-rich foods include:

Keep in mind, however, that seeds, nuts, and legumes contain phytic acid, a compound that inhibits mineral absorption. For bioavailable magnesium, you can’t beat green leafies.

Moving on to supplements, what type of magnesium should you take? A variety of forms seem to be effective, but I recommend magnesium malate.

In rats, ten different forms of magnesium were shown to sufficiently elevate magnesium levels. Of the ten, magnesium gluconate had the largest effect, but they didn’t test magnesium malate or magnesium glycinate.

Magnesium oxide appears to be the least-absorbed form of magnesium. It tends to work well as a laxative, though.

Another study in rats did test magnesium malate and found it was absorbed better than magnesium citrate, magnesium sulfate, and magnesium oxide. Malate is a derivative of malic acid, a tart, natural compound that enhances mineral absorption, may prevent kidney stones, and supports ATP (energy) production.

For these reasons, I chose magnesium malate to supply the magnesium in Drink LMNT. Plus it adds a nice tartness.

How do you know if you’re magnesium deficient? By checking serum magnesium levels?

I don’t recommend it. Only 0.3% of the total body magnesium is found in blood, so serum magnesium won’t tell you much.

Start by assessing your magnesium intake through diet and supplements. At a minimum, adults should be getting 320 (for women) to 420 (for men) mg per day, but anthropological evidence suggests our ancestors thrived on about 600 mg per day.

Also, look out for magnesium deficiency symptoms like muscle cramps, weakness, and fatigue. If these symptoms line up with a low dietary intake, you’re almost certainly low on magnesium.

How To Get Enough Magnesium

There are two ways to get magnesium into your body:

I recommend optimizing dietary magnesium, then supplementing until you hit around 400–600 mg per day. Getting your magnesium primarily from food ensures you don’t overdo this mineral, plus eating more leafy greens is generally a good bet for health and longevity.

I’ve found that most people, when they do a dietary assessment, need about 300 extra mg magnesium per day. If you’re suffering from insomnia, consider bumping that up to 500 mg—the same dose used in the clinical study.

If you haven’t determined your magnesium intake yet, use an app like Cronometer to do so. Once you know what you’re working with, you can adjust accordingly.

Spend a few minutes on magnesium. Pick that low-hanging fruit. It’s well worth it.