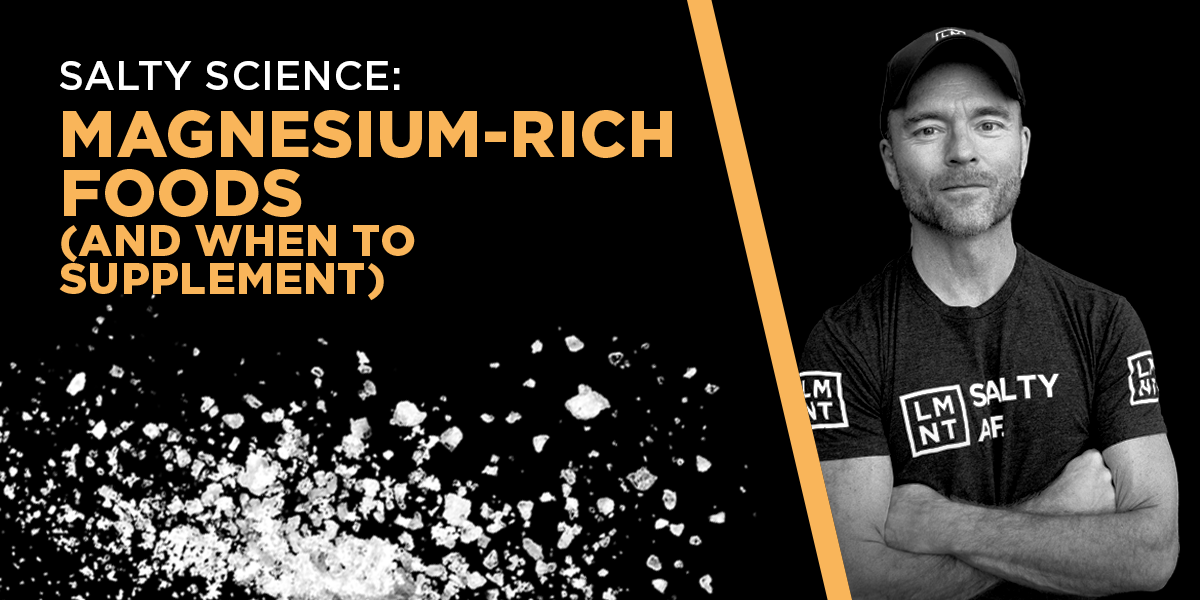 Magnesium-rich foods (and when to supplement)

Nonetheless, about 30% of people are deficient in this crucial mineral. Why?

One reason is that magnesium deficiency is difficult to detect. It won’t show up on a blood test and often doesn’t present with overt symptoms.

Most people aren’t aware that an electrolyte deficiency won’t show up on a blood test. Most people think that nutritional status for a given electrolyte—magnesium, sodium, potassium, etc.—is reflected on their annual electrolyte panel.

They’re wrong, but it’s not their fault. Nobody communicates this stuff. It’s not common knowledge that the body keeps serum electrolyte levels within tight ranges, pulling electrolytes from bone if necessary to normalize blood levels.

When serum magnesium is in range, it simply means your fluid balancing system is working properly. It doesn’t mean you’re getting enough dietary magnesium.

The other driver of magnesium deficiency is fairly straightforward: the modern diet. The modern diet is notoriously devoid of mineral-rich foods like spinach, kale, and avocado. If most of your meals come wrapped in plastic, there’s a good chance you might be low on magnesium.

Since you’re reading this article, I’ll bet most of your meals don’t come wrapped in plastic. But I’ll also bet you could really optimize your intake of magnesium-rich foods. I’ll cover these foods in a sec, along with supplement considerations. First, though, let’s cover some basics.

Magnesium is a mineral with the chemical symbol Mg. It belongs to a class of minerals called electrolytes that conduct electricity in the human body.

Some of magnesium’s roles—like regulating heartbeat—are related to electricity conduction. Many, however, are not. For instance, magnesium serves as a cofactor for over 300 enzymatic reactions in human physiology. The reactions catalyze nearly everything we care about: energy (ATP) production, DNA synthesis and repair, glutathione (antioxidant) production, fat metabolism, bone formation, and much more.

The Problem of Magnesium Deficiency

Since magnesium deficiency is hard to detect, it’s hard to calculate its prevalence. Because of this, most estimates rely on extremely unreliable food frequency questionnaires. Do you remember what you ate last Wednesday? How about fifty Wednesdays ago? You’d have to be a memory grandmaster (or uncommonly diligent food logger) to answer these surveys accurately.

The general picture, however, is that around 30 to 50 percent of people may be magnesium deficient.[*][*] The gravity of this problem becomes apparent when you look at the list of magnesium deficiency symptoms:

Signs and Symptoms of Magnesium Deficiency

You’ll notice that the chronic symptoms—hypertension, osteoporosis, calcification, and immunosuppression—are also harder to detect. You won’t detect these symptoms unless you’re tracking the relevant biomarkers.

I believe most of magnesium’s benefits are a consequence of preventing or reversing magnesium deficiency. To buy into my argument, you need only believe two things:

And when you remedy those magnesium deficiencies, here come those benefits.

Another consequence of magnesium deficiency (chronic inflammation) is also bad news for heart health. Inflammation is the gas that fuels atherosclerosis, the process that leads to the formation of plaques in the coronary arteries.

Several observational studies report that higher magnesium intake is correlated with better bone density.[*][*] This makes sense, considering 60% of our bodily magnesium is stored in bone.

As an aside, the electrolytes sodium, potassium, and calcium show a similar trend. If we don’t get enough of these minerals, our body plunders bone to “rectify” the deficiency. That’s bad news for osteoporosis risk.

Consider the following evidence on magnesium for anxiety, depression, and insomnia:

Does improving magnesium status improve strength? Yes, but probably only in magnesium-deficient people. For example, one meta-analysis showed that magnesium supplements promoted strength gains in those with low (but not high) magnesium levels.

Since magnesium deficiency is quite prevalent, I suspect extra magnesium would make a lot of folks stronger. That’s why you see controlled studies on magnesium boosting strength.

Recall that magnesium deficiency is linked to systemic inflammation. This low-level immune activation doesn’t just drive heart disease, but many other chronic conditions.

Take asthma, for instance. Folks with this inflammatory disorder tend to improve when they take magnesium.

Magnesium is also important for anti-cancer immunity. It supports programmed cell death (apoptosis), a process that destroys defective cells before they turn malignant.

The epidemic of type 2 diabetes is an epidemic of poor blood sugar regulation. When someone can’t regulate their blood sugar, the resulting hyperglycemia can lead to a host of disastrous complications.

Relevant here: magnesium supports the function of insulin, your blood sugar regulation hormone. In one meta-analysis on nearly 300,000 people, researchers estimated that diabetes risk decreases by 15% for every additional 100 mg of magnesium consumed daily.

If you want to prevent magnesium deficiency, you’ll want to eat a magnesium-rich diet. You can supplement too (and we’ll cover that soon), but food is the place to start.

Consuming your nutrients in whole foods:

Green leafy vegetables like spinach, beet greens, and chard not only contain plenty of bioavailable magnesium, but they also contain crucial minerals (like calcium and potassium) that complement magnesium in human physiology. They’re a one-stop shop.

Internalize this by remembering that magnesium sits at the center of the chlorophyll molecule. When you see green, you’re seeing magnesium.

Nuts and seeds are also good sources of magnesium, but I wouldn’t rely on them exclusively. Why not? Because nuts and seeds contain phytic acid, a compound (also high in grains) that binds to minerals and inhibits their absorption.

Some magnesium-rich foods include:

Prioritize these foods (especially the greens) and you’ll be in good shape, magnesium-wise. But what if you’re still not getting enough?

When To Supplement Magnesium

Most people should shoot for 400 to 600 mg of magnesium per day. I recommend leaning towards the upper end of this range based on what our Paleolithic ancestors used to eat.

(Note: Assuming you have healthy kidneys, there’s no downside to getting a little extra magnesium. The kidneys are excellent at buffering and excreting excess Mg.)

Even health-conscious folks eating Paleo-style diets may still be getting only, say, 300 mg of magnesium through food. (Pro tip: log your meals with the Cronometer app to determine your intake.) That’s where 100 to 300 mg of magnesium supplements come in.

Most forms of magnesium will do the trick, but I like magnesium malate (used in LMNT) for its excellent bioavailability. Fun fact: malic acid has some cool health benefits related to kidney health and energy production. Magnesium oxide is more poorly absorbed, but on the plus side: it makes an excellent laxative.

That’s it. Eat a magnesium-rich diet, perform a dietary analysis, and supplement as needed. It’s a simple three-step process to maintain a healthy magnesium status.