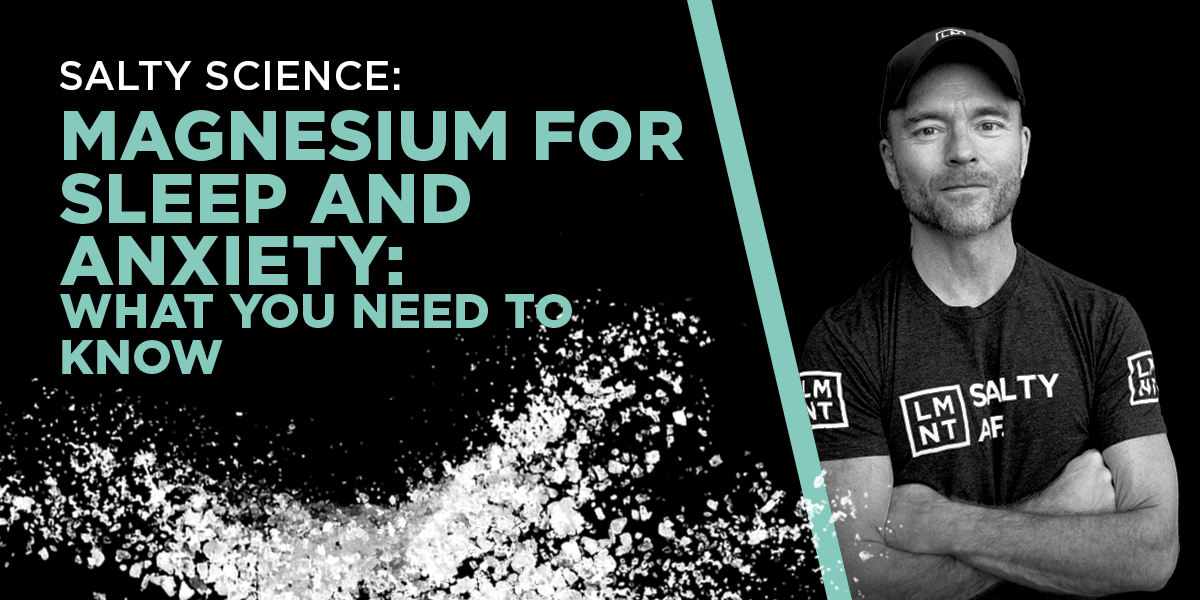 Magnesium for sleep and anxiety: What you need to know

From the desk of
Robb Wolf
Science → Magnesium for sleep and anxiety: What you need to know

Sleep and mood issues are rarely a simple fix. Even mild cases of insomnia, anxiety, and depression are multifactorial problems that require a holistic approach. I believe ensuring optimal magnesium levels should be part of that approach.

I believe this because magnesium supports the chemical systems that underpin restful sleep and relaxation. If you’re deficient in magnesium, for instance, you’ll likely have problems synthesizing melatonin, the sleep hormone.

A couple of small, well-designed studies suggest that magnesium supplementation can improve sleep quality. I’ll dive into those later.

There’s also considerable literature on magnesium for anxiety, the world’s most common mental health disorder. Anxiety and poor sleep, as you might imagine, are closely linked.

Even if you don’t have clinical anxiety, all of us experience bouts of nervousness, fear, and apprehension from time to time.

For myself, I don’t like having stuff on my plate. Not one bit. If it’s on my plate, I’m chomping down on it hard. So anxiety often creeps up in my email inbox. And when that anxiety leads to the mistake of checking my email close to bedtime, my sleep notices. That’s one reason I generally avoid my computer at night.

I also make sure to get 400—600 mg magnesium per day through diet and supplements (magnesium malate) to support sleep, relaxation, and many other functions. It may even provide a buffer against the email inbox dilemma. I wrote this blog to explain how that works.

Magnesium is a mineral that supports a vast array of physiological processes. For example, magnesium is an essential cofactor in the production of adenosine triphosphate (ATP), the energy currency that powers all living cells.

Magnesium is technically an electrolyte, but most of its functions are unrelated to electricity conduction. (Pure electrolyte functions are mostly carried out by sodium, chloride, potassium, and calcium).

Some roles magnesium plays include:

When magnesium is depleted, a number of systems suffer. This makes sense, considering magnesium is required for over 300 enzymatic reactions in your body.

Deficiencies can result from a diet low in plant foods, the use of antacid drugs, vomiting, diarrhea, and a variety of digestive disorders. We also lose magnesium through sweat, so athletes and sauna users will have elevated needs.

Why Magnesium Is Relaxing

Magnesium is known as the relaxation mineral because it has a calming effect. This effect appears to be mediated by the neurotransmitters GABA and glutamate.

Specifically, magnesium helps increase GABA (a calming neurotransmitter) and decrease glutamate (an excitatory neurotransmitter) in the brain. It does so by blocking the brain’s N-methyl-d-aspartate (NMDA) receptors, which are sensitive to glutamate.

Through this mechanism, magnesium regulates a variety of systems involved in sleep. These include the renin-angiotensin-aldosterone system, the HPA system, the GABAergic system, and the glutamatergic system.

GABA and glutamate are also implicated in anxiety and depression. It’s a complex picture, but the gist is that less glutamate and more GABA (borne of magnesium supplementation) can ameliorate these disorders.

Contrary to popular belief, there isn’t a boatload of evidence on magnesium for better sleep. But the two studies that do exist are promising.

In this double-blind placebo-controlled trial, researchers randomized 46 elderly patients with insomnia to receive either 500 mg magnesium or placebo daily for 8 weeks. Using some fancy statistical footwork, the researchers controlled for confounding factors like caffeine intake, dietary magnesium, and caloric intake. The idea was to isolate the effect of supplemental magnesium.

At the end of the 8 weeks, the magnesium group showed improvements in:

There were also hormonal differences worth mentioning. Compared to the placebo group, the magnesium folks had:

All positive things for the magnesium group.

This study employed a crossover design. Six elderly people took magnesium for 20 days, “washed out” for 2 weeks, then took a placebo for the next 20 days. Six others did the same but in reverse order.

The researchers hypothesized that taking magnesium might reverse the decline in slow-wave sleep (deep sleep) seen with aging. This sleep stage is crucial for hormone production and tissue regeneration, so we want to get more of it.

Magnesium for Anxiety and Depression

Anxiety and depression are the two most common mental health disorders. Anxiety tops the list, with about 15% of people experiencing debilitating fear and nervousness at some time in their lives.

Anxiety is often comorbid with depression, a condition marked by apathy and sadness. In 2017, 7.1% of US adults had at least one major depressive episode. Countless more suffer from mild or moderate periods of depression.

I should reiterate that both anxiety and depression are linked to insomnia. It’s a bit of a “chicken or the egg” scenario. Which causes which we aren’t sure, but we do know they come together.

There isn’t one cause of anxiety and depression, but too much glutamate (and too little GABA) is certainly part of the picture.

That’s where magnesium comes in. Recall that magnesium downregulates NMDA receptors, reducing levels of glutamate in the brain.

Consider the following research on magnesium for anxiety:

Population data also link higher magnesium intakes to lower rates of depression. This was nicely summarized in this 2017 meta-analysis.

How Much Magnesium Should You Get?

I recommend shooting for 400–600 mg of daily magnesium from diet and supplements. This recommendation is based on estimates of what our Paleolithic ancestors evolved to thrive upon.

If possible, get most of your magnesium through diet. The best sources of magnesium are colored green since magnesium sits at the center of the chlorophyll molecule. (Think leafy vegetables like spinach, swiss chard, and beet greens). Pumpkin seeds, sunflower seeds, squash, and black beans are also magnesium-rich foods.

Use an app like Cronometer to tally your daily magnesium intake. Once you have that number, supplement to make up the shortfall. (For example: If you’re getting 300 mg through diet, take 100-300 mg from supplements).

I recommend supplementing with magnesium malate. Avoid the poorly-absorbed form, magnesium oxide, unless your sole purpose is to promote bowel regularity.

If you’re struggling with sleep, anxiety, or both—and lower doses of magnesium aren’t cutting it—try 500 mg of supplemental magnesium taken with dinner. That’s the dose used in the insomnia study.

Although higher doses of magnesium are generally safe for those with healthy kidneys, I believe it’s wise to keep daily magnesium intake between 400–600 mg per day. If you need to go up from there, go slowly, as magnesium can have a laxative effect.

Magnesium for Sleep and Anxiety

Optimizing magnesium status won’t improve every case of insomnia and anxiety. Even if it does help, it probably won’t fix things completely.

These are multifactorial problems. They often require testing a variety of solutions.

But when it comes to magnesium, the evidence is good enough—and the risk low enough—to pay attention. Getting enough magnesium is an easy way to relax, sleep more soundly, and promote better health. What’s not to like about that?