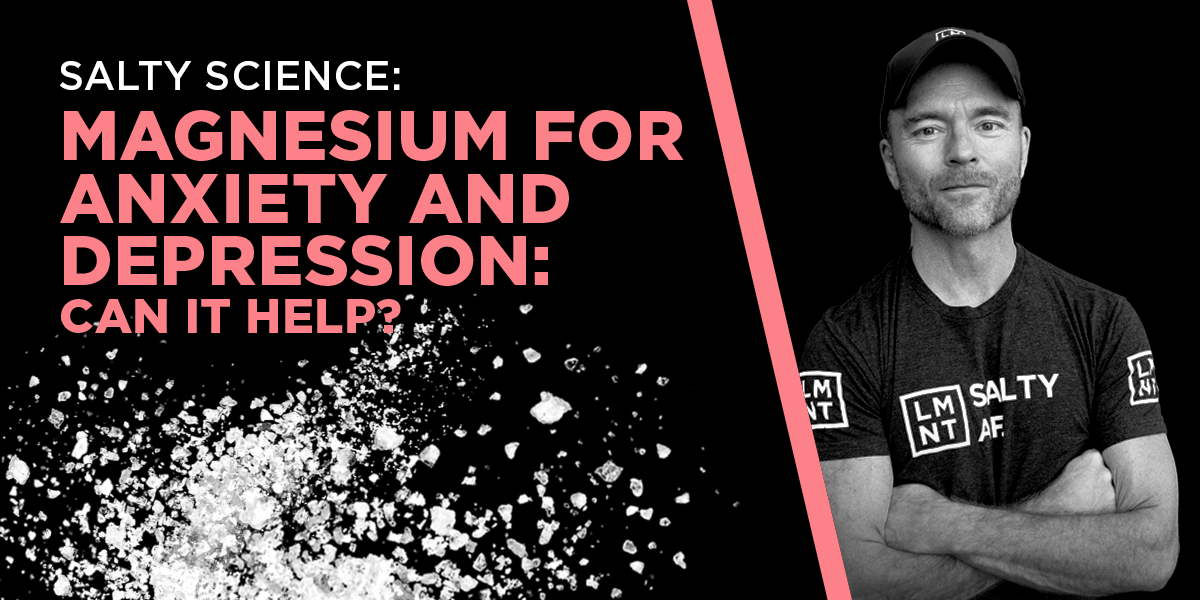 Magnesium for anxiety and depression: Can it help?

From the desk of
Robb Wolf
Science → Magnesium for anxiety and depression: Can it help?

Magnesium wears many hats. Compared to nutrients with more exotic names—resveratrol, curcumin, astaxanthin—magnesium might seem boring, but make no mistake: this mineral is a true nutritional workhorse.

It’s no secret among athletes and folks who follow ketogenic diets that magnesium helps with muscle relaxation and may also reduce frequency and severity of headaches and constipation. But what about magnesium for anxiety and depression? Could something as simple as boosting magnesium intake improve mood and mental health?

But to ignore the possibility that magnesium may play a role in alleviating anxiety or depression, or even increasing the efficacy of psychiatric drugs, would be a disservice to the millions of people living with these conditions.

So, I say, let’s explore. Stick around for 6 minutes and you’ll learn about some interesting research on magnesium and the mind.

Let’s start with a quick primer on magnesium and then we’ll take a closer look at whether it can make a dent in anxiety and depression.

An adult human body contains about 25 grams of magnesium, 50-60% of which is in the bones, with the remainder in soft tissue (muscle, mostly), and less than 1% resides in the blood. Magnesium is the fourth-most abundant mineral in the body and the second-most abundant positively charged electrolyte inside our cells.

Among hundreds of other functions, magnesium is required for the active transport of other electrolytes—like calcium and potassium—across cell membranes, including those of neurons. Helping to maintain the proper electrochemical gradient is important for nerve impulse transmission in the brain.

That means magnesium status can affect the brain and central nervous system. So it may not surprise you that anxiety, agitation, depression, hyperactivity, irritability, and aggression are potential symptoms of magnesium deficiency. More severe deficiency can result in personality changes and sudden behavioral changes believed to come from excessive electrical activity in the brain.

Hypomagnesemia (low level of magnesium in the blood) is quite rare. I’ll use vitamin C as an example. You may not get enough vitamin C each day, but that doesn’t mean you’re going to start kneeling over from scurvy. Similarly, having a normal blood level of magnesium doesn’t mean the rest of your body has a sufficient supply. Your body works hard to keep blood levels of minerals within a very tight range, and it does this by siphoning the minerals away from other places.

Let me reiterate: a normal blood level of magnesium doesn’t rule out a generalized insufficiency in the rest of your body—even one severe enough to result in signs and symptoms. Remember, 99% of your body’s magnesium is not in your blood.

So why might someone have suboptimal magnesium status? In short: low intake, medications, or medical conditions.

Low intake is the obvious driver of magnesium deficiency, so start by eating magnesium-rich foods. But even among people who do consume an adequate amount, there are very common factors among the general population that can reduce absorption or increase excretion of magnesium.

For example, long-term use of several frequently-prescribed drugs can increase risk for magnesium deficiency. Proton pump inhibitors for acid reflux are common culprits, as are diuretic drugs used for high blood pressure (if they don’t specifically “spare magnesium”). I’m not saying that these drugs should never be used—I don’t want to dismiss modern medicine in the many cases in which it can be genuinely helpful. That being said, we also shouldn’t downplay the seriousness of potential side-effects like inadequate magnesium status.

Excessive alcohol intake, type 2 diabetes, and insulin resistance can also lead to suboptimal magnesium status. (For the latter, an argument can also be made that it’s a two-way street: inadequate magnesium might increase risk for poor glucose handling and insulin sensitivity.)

Anxiety and Depression: Scope of the Problems

As much as 15% of the general population experiences anxiety, making it “the most pervasive psychiatric affective disorder.” Anxiety might be the most pervasive, but depression has the close honor of affecting hundreds of millions of people worldwide and accounting for 40% of the neuropsychiatric disorders in the US alone. The Journal of the American Medical Association noted in 2017 that depression affects as many as 322 million people and was the leading cause of disability in the world. Like I said earlier, imagine if an inexpensive and readily available mineral could have even a small impact on this.

People living with anxiety or depression have trouble sleeping, but it can be difficult to tease out whether the mood disturbances make it more difficult to get good quality sleep, or if poor sleep contributes to the mood issues. As noted in this past article, it’s likely a bit of both, and many people would attest that poor sleep can be a trigger for an especially bad day with regard to their anxiety or depression. So it’s worth noting that magnesium has been shown to improve sleep quality and quantity.

Magnesium is a Natural Relaxant

I’m oversimplifying a bit here but think of magnesium as a natural calming or relaxing agent. Calcium, on the other hand, induces stiffening or contracting. This is why one class of medication for hypertension is called “calcium channel blockers”: reducing the activity of calcium ions in blood vessels allows the vessels to relax and dilate, allowing easier flow of blood, and therefore, lower blood pressure.

Oral magnesium is a natural calcium channel blocker and affects other pathways that result in muscle relaxation, and it appears to have similar calming or relaxing effects in the brain. For starters, magnesium facilitates proper neurotransmitter release and neuronal action potential conduction, which supports healthy neurological function. And that’s great! But the actual calming effects probably come from decreasing glutamate (an excitatory neurotransmitter) and increasing GABA (gamma-amino-butyric acid, a calming neurotransmitter).

This is also related to the calcium channel blocking effects of magnesium: magnesium reduces activation of the NMDA (N-methyl-d-aspartate) receptor, which decreases excitatory activity from glutamate. Low magnesium has been said to lead to “a supportive environment for excitotoxicity,” and this “abnormal glutamatergic neurotransmission has been implicated in many neurological and psychiatric disorders” including depression and anxiety. Blocking calcium’s role in NMDA receptors may help reduce feelings of stress and anxiety.

Boosting serotonin is another way magnesium might be beneficial for people with depression. Low serotonin levels have long been suspected to play a role in seasonal affective disorder and other forms of low mood and depression (although this has been increasingly called into question). In any case, for people in whom low serotonin is a factor, increased magnesium intake (from food or supplements) may be helpful because brain magnesium deficiency reduces serotonin levels, and some antidepressant medications may work in part by increasing brain magnesium.

Lastly, it has also been noted that systemic inflammation is common in people with major depression. Magnesium has anti-inflammatory effects that might offer an additional mechanism for the improvement in depression seen with magnesium supplementation.

Magnesium for Anxiety and Depression

There appears to be a correlation between suboptimal magnesium status among people with depression. A small association was found between low magnesium intake and depression among younger adults and other analyses have found that higher magnesium intakes are associated with lower risk for depression.

That’s telling, but we don’t want to hang our hats on survey data from food intake questionnaires. It’s not easy to get a solid picture of total body magnesium status, but when measurements are made (as opposed to vague guesswork of someone’s dietary intake), low blood magnesium or suboptimal status were found in nearly 40% of subjects in one study.

Okay, great. Plenty of possible mechanisms, and lots of folks with depression have low magnesium intake and/or blood levels. But what happens when the rubber hits the road?

Does increasing magnesium intake actually help with anxiety or depression?

A randomized controlled trial showed that in subjects starting off with low blood magnesium, magnesium supplementation normalized the magnesium level and reduced depressive symptoms more than placebo. The difference wasn’t a landslide, but it was “statistically significant,” and the form of magnesium used—magnesium oxide—is less absorbable than others.

A study using magnesium chloride, which is more bioavailable, found that supplementation led to significant improvements in anxiety and depression, and beneficial effects were noted within just two weeks. Improvements were similar regardless of biological sex, age, baseline magnesium level, severity of depression, and even concurrent use of antidepressant medicines and other therapies—but maybe even more importantly, the results weren’t just statistically significant. The magnitude of improvement was large enough to have real-world relevance. In other words, it wasn’t mathematical shenanigans that made magnesium look good here; the improvements in anxiety and depression made a difference to living, breathing humans going about their lives.

Even more remarkable real-world relevance was reported in a case series of magnesium supplementation (as glycinate or taurinate) leading to rapid and profound recovery from major depression, suicidal depression, post-partum depression, and substance use disorders. People with treatment-resistant depression (TRD) and patients who have attempted suicide are often found have low cerebral spinal fluid magnesium levels, leading one study’s authors to write, “We hypothesize that – when taken together – there is more than sufficient evidence to implicate inadequate dietary magnesium as the main cause of TRD, and that physicians should prescribe magnesium for TRD.”

Let’s tie this all together now.

When to Supplement Magnesium

Standard antidepressant (pharmacologic-only intervention) therapies fail to have much of an impact in about 60% of cases. Researchers have proposed adding magnesium to enhance efficacy in these situations: it doesn’t have to be medication or magnesium; it can be both.

The US Institute of Medicine’s Food and Nutrition Board set the tolerable upper intake level for magnesium supplementation at 350 mg/day, but higher levels are often required to induce a therapeutic benefit. Some researchers recommend 600-800 mg/day or more for people with major depression. (If you’re taking medication, work with your licensed medical professional before introducing new supplements.) But it’s worth noting that you should spread your magnesium intake out throughout the day. Unabsorbed magnesium may invite water from nearby tissues into the intestine or colon, causing diarrhea. Save yourself the trouble.

My final advice? I’d recommend most people get 500-600 mg each day, through a magnesium-rich whole foods diet first and foremost. Since blood tests won’t tell you if you’re in the optimal range here, the best way to do this is with a dietary analysis. Track your diet with Cronometer or another app of your choice to lock in what you’re eating, and then supplement as needed. 60 mg of magnesium was one of three essential minerals we decided to include in LMNT, our science-backed electrolyte drink mix—so if diet alone won’t cut it, that could help you cross the finish line.

Magnesium may not help everyone’s anxiety or depression, but considering the degree to which these can downright demolish quality of life, it’s hard to make a case against giving this a try. Your body will only thank you for getting your magnesium handled.