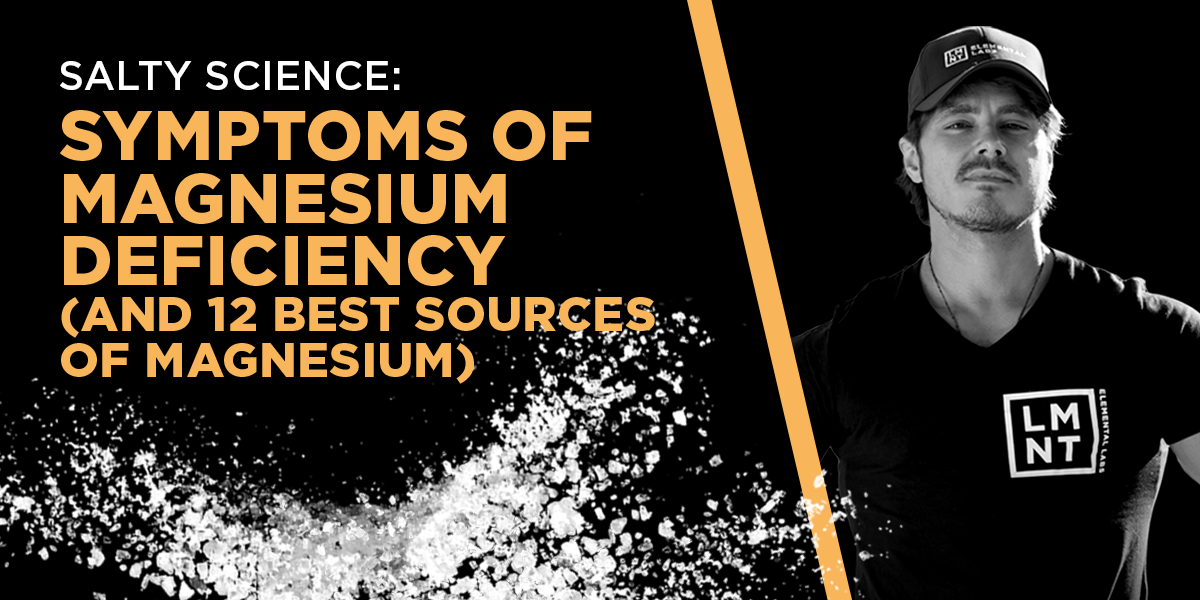 Up to 30% of people are subclinically deficient in magnesium. Unfortunately, most of them don’t know it. Magnesium deficiency is notoriously difficult to detect.

The signs and symptoms of magnesium deficiency run the gamut: anxiety, depression, muscular weakness, muscle cramps, tremors, hearing loss, osteoporosis, calcifications, rapid heartbeat… the list goes on. These symptoms, however troubling, are multifactorial. There are a number of potential causes for each of these symptoms, so we can’t assume magnesium deficiency is the culprit off-bat.

Another important point: blood tests are not a good measure of magnesium sufficiency. They only tell you when you reach the point of hypomagnesemia, and your body will go to extreme lengths to prevent this. The last place your body wants to run out of magnesium is in your blood.

But these roadblocks don’t mean we should give up on our magnesium status! Performing your own dietary analysis can give you an idea of where you’re at. And once you know your magnesium status, you can dial it in with a magnesium-rich diet and supplementation.

I wrote this article to teach you the causes and signs of magnesium deficiency, and actionable ways to prevent it. This can help you avoid myriad health complications, so let’s dive in. First up, I’ll cover what exactly magnesium does for our bodies.

Why Magnesium Is Important

Did you know that magnesium is a necessary cofactor for over 300 enzymatic reactions in the human body? These reactions support such mundane (but critical) functions as DNA repair, bone formation, wound healing, and even the production of energy (ATP) itself.

Then there’s your skeleton, where 60% of your total body magnesium resides. When you don’t consume enough magnesium, where do you think your body pulls it from? That’s right: your bones. Unsurprisingly, osteoporosis is a well-documented sign of chronic magnesium deficiency.

But heart health is where magnesium’s importance is most apparent. Magnesium status not only affects clotting, calcification, heart rhythm, and blood vessel relaxation, but it also influences the inflammatory response.

The last point is relevant for atherosclerosis, the buildup of arterial plaque that defines heart disease. Chronic inflammation (which is linked to magnesium deficiency) drives the reactions that create these plaques.

I’m not saying that inflammation is evil. Inflammation merely describes an immune response—often a necessary one. But due to a variety of factors (including nutrient deficiencies), this response sometimes lingers in otherwise healthy tissues. We call this “systemic inflammation”, and it’s linked to most modern diseases.

Finally, here’s a good bit of trivia to know: yes, magnesium is an electrolyte—a charged mineral that conducts electricity in the human body—but most of its roles are unrelated to electricity conduction. Now, on to the causes of magnesium deficiency.

Mostly, a lack of dietary magnesium. There are several reasons why people don’t consume enough of this crucial mineral.

First, the modern Western diet is high in refined carbs (the refining process often removes magnesium) and low in magnesium-rich foods like green leafy vegetables, nuts, and dark chocolate. Magnesium sits at the center of the verdant chlorophyll molecule, but there’s scarcely any green to be seen in the standard american diet.

To make matters worse, micronutrient density has been declining since 1940. Consider these declines in magnesium content among common foods in the UK:

Much of this effect is likely due to diminishing soil quality, caused by large-scale monocrop agriculture. Thanks to the bludgeoning influence of industrial agriculture, plants aren’t absorbing as much magnesium as they used to. It’s also possible that faster-maturing plants lack the needed time to soak up magnesium from the soil.

Beyond magnesium-poor diets, certain nutrients—like phosphorus, calcium, and vitamin D—increase magnesium requirements and losses. The American staple of fortified dairy is a “triple whammy” of these magnesium-depleting nutrients.

A long list of conditions and medications (mostly diuretics and laxatives) can also cause magnesium deficiency. Medical conditions linked to magnesium deficiency include diabetes, Crohn’s disease, low stomach acid, alcoholism, hyperthyroidism, heart failure, liver disease, and many others. (See boxes 1 and 2 in this paper for a full list).

Signs and Symptoms of Magnesium Deficiency

There’s no single indicator of magnesium deficiency. Instead, there’s a vast constellation of signs and symptoms. I’ll list a bunch of them first, then I’ll expand on several.

Signs and Symptoms of Mild or Moderate Magnesium Deficiency:

These categories don’t encompass ALL the symptoms, but they cover most of them.

The most serious consequences of magnesium deficiency involve the heart. For instance, being low on magnesium impairs blood vessel relaxation and raises blood pressure. Unfortunately, many folks with hypertension are given magnesium-depleting diuretics as part of their treatment.

Low magnesium intakes have also been shown to increase the likelihood of arrhythmias (irregular heartbeat). Why? Probably because low magnesium depletes an enzyme called Na-K-ATPase that serves to relax blood vessels around the heart.

Finally, magnesium deficiency may accelerate atherosclerosis and calcification in the arteries. It’s a lesser-known factor in the development of heart disease.

Magnesium deficiency has been linked to both depression and anxiety. In one clinical study, six weeks of magnesium supplementation improved depression symptoms in 126 adults with mild to moderate depression.

Magnesium’s relaxing effect (likely mediated by the neurotransmitter GABA) may also help with sleep. One study, for instance, found that 500 mg of daily magnesium taken for 8 weeks reduced insomnia in elderly people.

If you don’t get enough magnesium, your body pillages bone to make up the shortfall. That’s bad news for bone density. This is corroborated by findings that women with osteoporosis have poor magnesium status.

About 27% of total body magnesium is found in muscle, suggesting its importance in this tissue. Muscle cramps, muscle spasms, muscle weakness, seizures, and tremors are all potential signs of magnesium deficiency.

Anecdotally, muscle cramps from magnesium deficiency seem to be worse at night and feel like full-fledged “charley horses” rather than the muscle tremors that may accompany potassium deficiency.

Many immune system problems have been linked to magnesium deficiency. These include:

If my serum magnesium test comes back in range, I have nothing to worry about. That’s what most people think.

I wish that were true, but it’s not. Less than 0.3% of your total body magnesium is found in your serum, so it’s a lousy place to test for a deficiency.

Testing magnesium in red blood cells or urine is more sensitive, but these measures still aren’t perfect. Again, most of your magnesium is stored in tissues (bone, muscle, liver) that aren’t being measured.

The best way to assess magnesium status is through a dietary analysis. Simply log your meals in an app like Cronometer and it spits out your daily magnesium intake.

The RDA for adults is 420 mg (men) and 320 mg (women), but anthropological evidence suggests that closer to 600 mg may be optimal. I’ll add that anecdotal evidence from coaching thousands of people in my career echoes that number.

Nuts and dark chocolate may be a bit too caloric depending on your health goals, so that may be an issue for some. But that’s why I gave the shoutout to leafy greens in particular. They’re more difficult to overeat and are often rich in helpful micronutrients.

To prevent magnesium deficiency, eat a magnesium-rich diet first and foremost. Then, perform a dietary analysis of your intake to fill in the gap with supplemental magnesium.

Yes, even on a whole foods diet, you should probably get some extra magnesium. The research suggests that most folks would benefit from 300 mg of additional magnesium per day to reduce heart disease and osteoporosis risk.

This was part of the guideline we used to formulate LMNT. Each stick—designed to meet ⅕ of your daily extra electrolyte needs—contains 60 mg of magnesium. (60 * 5 = 300 mg).

With your magnesium status handled, you may not notice anything remarkable. But your body will. And down the road, it will thank you.