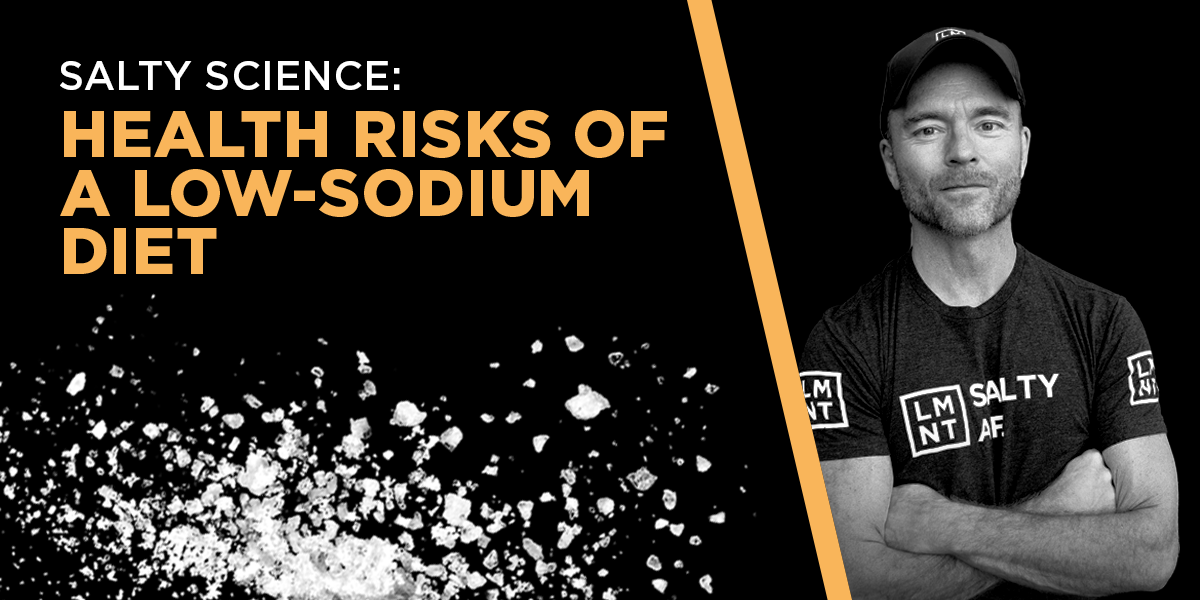 Health risks of a low-sodium diet

The US government has recommended a low sodium diet for about forty years. The message is that reducing sodium intake will reduce our collective risk of heart disease.

Recently, the FDA reinforced this message by asking food companies to drastically reduce salt in the food supply. The goal is to inch the average intake closer to their target of 2.3 grams of sodium per day.

If you’ve been following my work, you know how I feel about low sodium recommendations. They’re not only misguided but they can be dangerous for healthy people.

Because sodium is a convenient and easy-to-understand scapegoat. Because the government subsidizes the sugar industry to the tune of $4 billion per year. Because many don’t want to hear they need to exercise frequently.

All are contributing factors. And so sodium gets shunned across the board. That’s where the danger comes in. Unlike sugar, sodium is an essential nutrient. When we don’t get enough of it, bad things happen.

Most healthy people need more sodium, not less. They feel and perform much better when they bump it up. But powerful forces are imploring us to curtail sodium. Today I’ll be talking about the folly (and health risks) of these recommendations.

Why Sodium Is Vilified

Back in the 1960s, a scientist named Lewis Dahl did some experiments. In these experiments, he found that injecting rodents with sodium raised their blood pressure.

The rodents, to be clear, were a salt-sensitive breed of rats. And they were given a supraphysiological dose of sodium. And they were rats, not humans. Nonetheless, Dahl’s data would become the bedrock of the anti-salt campaign.

The other pillar of the anti-salt campaign rests on observational data. And it’s true: in some populations, higher salt intakes are linked to higher rates of hypertension (high blood pressure) and heart disease.

But in others, they’re not. That’s why we look at the WHOLE PICTURE like researchers did in the 1988 Intersalt Study. Analyzing over 10,000 people across 48 cultures, they found no correlation between salt intake and high blood pressure incidence.

If sodium was the enemy of healthy blood pressure, it would have shown up there. But it didn’t.

What about data linking higher salt intakes in the US to heart disease? Remember that correlation doesn’t prove causation. Consider that:

These considerations become more persuasive when you ponder the physiological importance of sodium.

What Sodium Does For You

Sodium’s roles in your body can be lumped into two main categories:

Maintaining fluid balance in your tissues is the goal of hydration. You consume water and electrolytes so your blood can flow, your brain can rest in fluid, your body can dispose of waste, your sweat can cool you off, and much more.

Specifically, sodium regulates extracellular fluid balance. It helps maintain blood volume so your blood can shuttle nutrients to your tissues.

When most people think about hydration, they think about drinking water. They forget about electrolytes like sodium, potassium, and chloride. This neglect of electrolytes explains many hydration-related issues (cramps, fatigue, etc.) in active, sweaty people.

Important stuff, you might say. Now let’s see what happens when you’re low on sodium.

What Happens on a Low-Sodium Diet

If you under-consume sodium, it will make your body sad. But it won’t kill you. Why not? Isn’t sodium essential? What about fluid balance and sodium-potassium pumps?

All that stuff is critical, and your body knows it. That’s why it has a dynamic sodium-retention system.

The first line of this system is a group of hormones including antidiuretic hormone (ADH), aldosterone, renin, angiotensin, and norepinephrine. Triggered by sodium deficiency, these hormones tell your kidneys to retain sodium.

But these hormones have other effects too, like raising blood pressure and increasing the fight or flight response. I’ll elaborate on that soon.

How else does your body maintain sodium status on a low sodium diet? It pulls sodium from your vast sodium reservoir: the skeleton. Good news for sodium levels, bad news for bone density.

This explains how your sodium blood test can come back normal on a salt deficient diet. Serum sodium is not an accurate marker of sodium status, folks.

Once you understand the sodium-retention system, the health consequences of a low sodium diet make more sense.

When you’re light on sodium, your body pulls it from bone. Probably why low sodium intakes are linked to the brittle bones and increased fracture risk that define osteoporosis, don’t you think?

Salty diets are (surprise surprise) often blamed for osteoporosis based on unsupported notions about calcium balance disruptions. The evidence, however, pins sugar as the problem more likely for bone health issues.

Remember aldosterone, renin, angiotensin, and norepinephrine? These hormones rise on a low-salt diet to help you retain sodium. These hormones also raise blood pressure. Not ideal for heart health.

This explains data from the 2017 Framingham Offspring Study. In the analysis, sodium-restricted diets (under 2.5 grams per day) were actually linked to higher blood pressures in 2,632 men and women.

I’m not saying that too much sodium won’t raise blood pressure. It will, at least transiently. But there’s a sweet spot for sodium and most healthy people are short of it.

You’ve probably heard of cortisol. Known as the “stress hormone”, it exerts effects on most human cells.

Cortisol is essential for survival. Let’s be clear on that. But in excess, cortisol can lead to undesirable fat storage, bone decomposition, and muscle breakdown.

Here’s the thing. Low sodium intakes alone won’t cause hyponatremia, but they will increase the risk of developing it.

Poor sodium status can cause a long list of symptoms, all of which are multifactorial. Here are the big ones:

How Much Sodium Do You Need?

For most people, a good starting point is 4–6 grams of sodium per day (that’s about 2 to 3 teaspoons of salt). This recommendation is based on data from a 2011 JAMA study that found 4–6 grams daily was the sweet spot for heart health in high-risk patients.

But sweaty low-carb athletes, for example, will need even more. I work with NHL teams, and some of the big guys need many sticks of LMNT to replace sweat losses when they train. (LMNT contains 1 gram of sodium per stick pack.)

You’ll have to play around to find what works best for you. For many of us, the optimal dose may be significantly higher than what authorities continue to recommend. The cool part is that if you’re low on sodium, you should feel better within minutes of a good dose. Try sipping electrolyte water the next time you’re training.