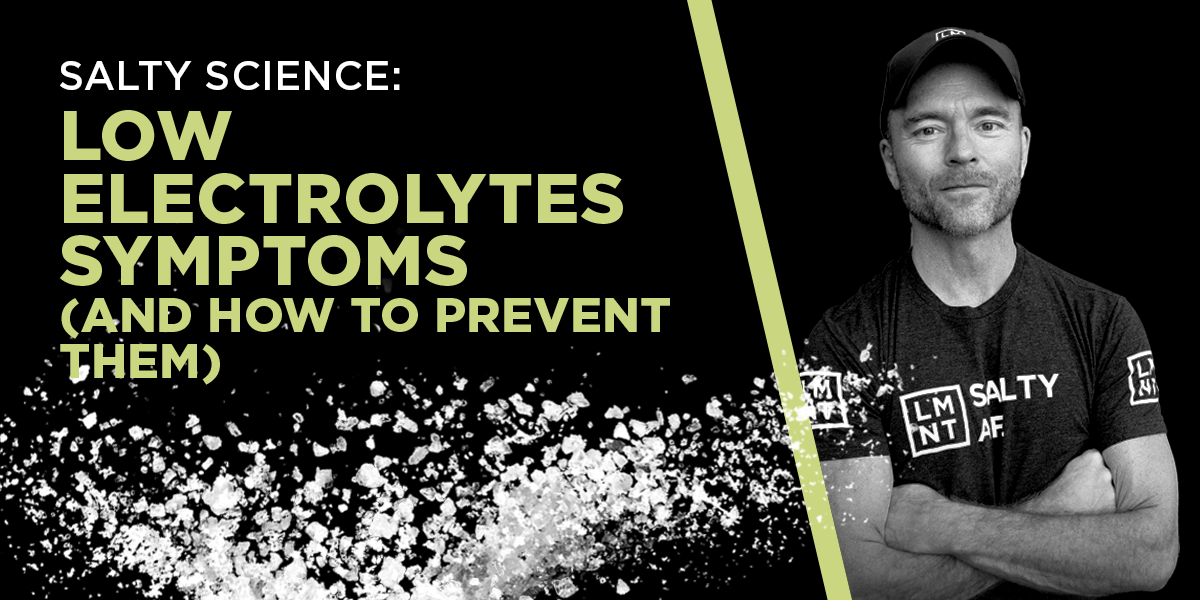 Low electrolytes symptoms (and how to prevent them)

Many people have low electrolytes symptoms. Unfortunately, most of them don’t realize it. They know something is off. They might, for instance, feel tired, crampy, low energy, or experience headaches. But they can’t identify the root cause of the problem.

Often the symptoms are blamed on lack of sleep, stress, poor blood sugar control, or getting old. And these could be factors. All of the symptoms I listed are multifactorial, meaning they don’t have just one cause. It’s often a combination of a number of things, but an underappreciated and fairly common cause is a lack of electrolytes.

I speak from experience. A few years back, I was getting quite frustrated with my jiu-jitsu performance. Was this a natural consequence of turning 40? In my case, it definitely wasn’t. Rather, I was experiencing a natural consequence of electrolyte deficiency. Bumping up my electrolytes (especially sodium) per the recommendation of my former coaches solved the problem. My energy came roaring back.

Here’s the thing. Optimizing sleep and managing stress can be difficult. And none of us are getting any younger. But preventing the symptoms of low electrolytes is fairly easy. If you’re eating an electrolyte-rich diet, hydrating properly, and supplementing wisely—barring any medical conditions—you’ll be in good shape. Let’s dive in.

Electrolytes are charged minerals that conduct electricity in your body. They allow nerve impulses to fire, regulate fluid balance, structure bone, regulate muscle contraction (including heartbeat), serve as cofactors for energy (ATP) production, and much more.

The electrolytes gang includes sodium, chloride, potassium, magnesium, calcium, phosphate, and bicarbonate. Each of these minerals/ions has specific roles, some of which I’ll cover later on.

Electrolytes enter and exit your body each day. They enter through dietary sources (including salt), and exit through sweat, urine, and feces.

Speaking of urine, each of us has a homeostatic system that ensures blood electrolyte levels stay within reasonable ranges. This system includes the brain, kidneys, bones, and a bunch of hormones.

If you don’t get enough sodium, for instance, you secrete aldosterone to reabsorb more sodium in the kidneys. Aldosterone, however, also increases potassium excretion and raises blood pressure.

The takeaway is that being low on electrolytes causes side effects you don’t want. But what do we mean by low electrolytes?

What Does Low Electrolytes Mean?

Low electrolytes can mean one of two things:

An electrolyte imbalance (also called an electrolyte disturbance) is when blood levels of a given electrolyte get too low or too high. Depending on the severity of the imbalance, the condition may require prompt medical attention.

The biggest hydration-related imbalance is called hyponatremia. Hyponatremia (low serum sodium) is often caused by drinking too much plain water, and it’s the scourge of endurance athletes. Low sodium is why many marathoners finish the race in a lethargic, light-sensitive funk. Occasionally hyponatremia is fatal.

I won’t review all the electrolyte disturbances today. Just understand that for every electrolyte, there’s a corresponding “too low” (hypo) and “too high” (hyper) blood level, and that they are usually caused by things more serious than low dietary intakes of electrolytes, like kidney issues, medical conditions, or medications.

An electrolyte deficiency, on the other hand, occurs when you don’t consume enough of a given electrolyte for optimal health. It’s distinct from an electrolyte imbalance in that it doesn’t declare your blood levels are low on electrolytes. But wait—won’t inadequate sodium, potassium, calcium, or magnesium intakes cause serum electrolyte levels to fall?

Generally not. If you don’t consume enough, your body pulls what it needs from bone to maintain blood levels. It’s an essential part of the homeostatic system I mentioned earlier.

Electrolyte deficiencies are caused by inadequate electrolyte intakes. Inadequate, however, is a relative term. Different people need different amounts of electrolytes to look, feel, and perform their best. For instance, a low-carb athlete may need two times more salt than a sedentary person due to increased sodium losses through sweat and urine.

What about electrolyte imbalances? Those only occur when electrolyte homeostasis gets derailed. That can happen due to:

Now let’s talk about the symptoms of low electrolytes.

Before I dig into the symptoms, a few caveats:

Thanks to decades of baseless anti-salt rhetoric, most health-conscious people don’t consume enough sodium. Then they wonder why they feel lousy.

I see this a lot in low-carb folks. The symptoms of sodium deficiency—headaches, muscle cramps, low energy, weakness, insomnia, and irritability—are often labeled “keto flu.” Keto dieters also lose more sodium through urine. And if they happen to be active keto dieters, their sodium needs rise even more.

A sodium deficiency alone won’t cause hyponatremia. (The main causes are heart failure, kidney disease, liver disease, cancer, vomiting, diarrhea, diuretic usage, and overhydration.) But it will increase the risk, especially if you drink lots of plain water.

The symptoms of hyponatremia may include:

Fortunately, these complications can be prevented and resolved by consuming salt—specifically, 4–6 grams of sodium (about 2–3 teaspoons of salt) per day through diet and supplementation. 4–6 grams of sodium daily seems to be the sweet spot for heart health outcomes according to our best data.

Only 3% of Americans meet the Institute of Medicine’s target of 4.7 grams of potassium per day, though 3.5–5 grams per day is a solid evidence-based target.

In the presence of other factors, a potassium deficiency can also contribute to hypokalemia, the medical term for low serum potassium. The symptoms of mild hypokalemia include:

And the symptoms of moderate to severe hypokalemia include:

To be clear, however, hypokalemia is rare in those with healthy kidneys.

Magnesium supports over 300 enzymatic reactions in the human body. If you don’t get enough of this mineral, your health will notice.

But I don’t recommend trying to diagnose a magnesium deficiency by symptoms alone. Why? Because the list of symptoms is long and nonspecific.

Based on the published evidence, the better approach is to conduct a dietary analysis of your current magnesium intake, and then simply consume 400 to 600 mg of magnesium per day. I’ll talk more about optimizing magnesium status later.

About 99% of bodily calcium is used to structure your skeleton. Because of this, calcium deficiency does a great disservice to bone density. The consequences include:

What about hypocalcemia? This state of low serum calcium won’t occur from a calcium-poor diet alone, but as a consequence of renal failure, vitamin D deficiency, problems with parathyroid hormone (PTH), poor magnesium status, critical illness, or certain pharmaceuticals.

The symptoms of hypocalcemia include:

How to Prevent Low Electrolyte Symptoms

The basic rules for preventing low electrolytes are:

To hydrate properly, simply drink to thirst. And when replacing sweat losses, replace both fluids AND sodium. This will prevent overhydration and the resulting hyponatremia.

To get a handle on your electrolyte intake, start with a dietary analysis. Log your meals in an app like Cronometer, see where you stand, and adjust as needed.

You’re looking for baseline intakes of around 4–6 grams of sodium, 3.5–5 grams of potassium, 1 gram of calcium, and 400–600 mg of magnesium per day. Your sodium mileage may vary due to lifestyle factors, but the other electrolytes shouldn’t budge much.

It’s best we get the bulk of our nutrients through our diet and then supplement what we need afterward, so the first lever I recommend pulling is food. This means:

Even after this step, most folks are still short of their targets. Based on our analysis of those eating low-carb whole food diets, we found most folks, after taking their diet into account, fell short by:

Depending on your diet and lifestyle, your needs and shortfalls may look a bit different, but I can say with a high degree of confidence that almost everyone could benefit from upping their sodium, potassium, and magnesium intake.

That’s where LMNT (our tasty electrolyte drink mix) and a mindful application of electrolyte supplements come in. These are low-effort interventions to prevent low electrolyte symptoms from hindering your performance. Worth it, I’d say.