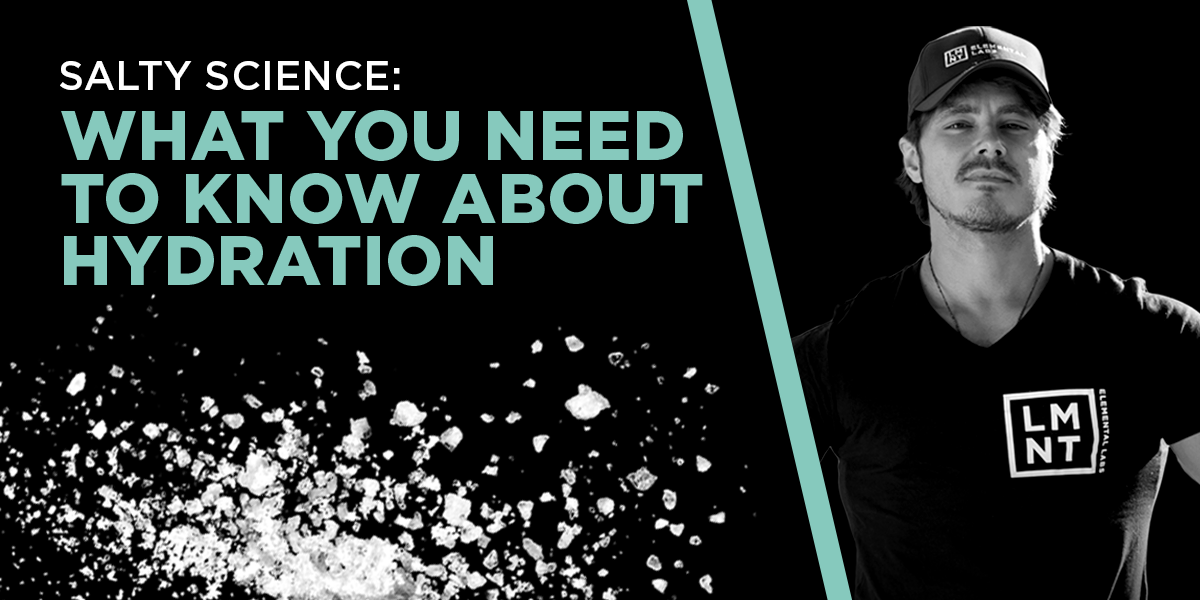 What you need to know about hydration

Conventional wisdom recommends drinking 8 glasses of water per day to stay hydrated. Eight a day keeps the medic away.

Unfortunately, there’s no actual science behind this recommendation. To make matters worse, there’s no mention of electrolytes either. This is a glaring omission from the hydration conversation.

The dictionary, in case you were wondering, defines hydration as “the quality or state of being hydrated (especially: the condition of having adequate fluid in the body tissues).”

I like the “adequate fluid” part of the definition, because it hints at the REAL goal of hydration: To achieve a level of fluid balance conducive to optimal health and performance.

Balance is the operative word here. Balance means drinking a Goldilocks amount of water—not too much, not too little, just right. Balance also means getting enough electrolytes to keep your system humming along like a TAG Heuer.

Everyone needs to think about hydration. But certain folks—athletes, low carb dieters, and anyone who likes to sweat—need to think about it more than others. I’ll share my thoughts on how these groups should be hydrating near the end of the article.

First, though, I need to clear up some confusion about dehydration.

Should You Drink More Water To Prevent Dehydration?

Dehydration—defined as: losing more water than you’re taking in—gets blamed for many conditions. Performance declines, muscle cramps, mood swings, heat stroke… the list goes on. Believe it or not, some medical “professionals” even blame dehydration for obesity and diabetes.

Here’s the thing. Most of this dehydration trivia is unsubstantiated.

Take heat stroke, for example. Most people who die of heat stroke (about 700 per year in the US) are either infants or senior citizens. These populations have physiologic issues cooling themselves via sweat. More fluids won’t fix that.

Additionally, dehydration doesn’t appear to raise core body temperature. In fact, when athletes are dehydrated, they stop activity at lower body temps. This lines up with data from MDAlert.com reporting that, in all the medical literature, there isn’t a single case of death from sports-related dehydration.

Still, dehydration is widely considered the scourge of athletes. Because of this, people take extreme measures to ward it off. For instance, one 2009 study published in the British Journal of Sports Medicine found that, in a sample of 197 runners, a large proportion reported drinking on a set schedule. In other words, they glugged liquid even when they weren’t thirsty.

This practice of overwatering, unfortunately, leads to a dangerously low sodium state called hyponatremia. And unlike simple dehydration, hyponatremia has been fatal to athletes.

The Need For Sodium

Sodium is an electrolyte—a mineral that carries electrical charges (read: nerve impulses) in your body. Sodium also regulates fluid balance, which is, if you recall, at the core of hydration.

When you don’t consume enough sodium, you may experience headaches, muscle cramps, fatigue, and insomnia. And when blood sodium levels fall below a certain point, it’s called hyponatremia.

Exercise-associated hyponatremia is more common than you might think, affecting about 15% of endurance athletes. The severely sodium deprived athlete may experience seizures and brain damage. In the most severe cases, hyponatremia can be fatal.

Often, hyponatremia is often mistaken for basic dehydration, or not drinking enough water. However, encouraging someone with hyponatremia to drink more water dilutes blood sodium levels, making the problem worse. In one tragic case, an army trainee was overwatered, and subsequently perished from low sodium levels.

Common causes of hyponatremia include:

All but the first two reasons are beyond the scope of this article. If you have one of the listed medical concerns, see a doctor. Overwatering, on the other hand, is more easily rectified.

The first pillar relies on a simple rule: Drink to thirst.

Thirst doesn’t happen by accident, but rather is governed by physiological triggers like osmolality and blood volume. Osmolality, in case you were wondering, is a fancy scientific term that refers to the amount of electrolytes in your blood. Higher osmolality, generally speaking, leads to greater thirst.

If you think about it, it makes sense. When you eat extremely salty foods, you get thirsty.

Decreasing blood volume also triggers thirst. If your blood takes up less space in your blood vessels than is advantageous or beneficial, it probably means you need more fluid.

The other pillar of healthy hydration is to consume adequate sodium. Did you know that athletes lose up to 7 grams of sodium per day through sweat? That’s a solid three and a half teaspoons of salt, and it’s one reason why I recommend folks consume 4–6 grams sodium per day as a mere baseline.

The good news is, drinking salty liquids can prevent and reverse exercise-associated hyponatremia. This was shown in a 2014 randomized controlled trial, in which hyponatremic runners saw similar improvements from drinking a saline solution as they did from receiving IV sodium.

Do You Need Sugar For Hydration?

In 1960, Dr. Robert Crane proposed an interesting theory. Glucose and sodium, he believed, worked synergistically to enhance one another’s absorption through the gut.

His “co-transport hypothesis” has since been proven true. With the help of transporter proteins called SGLT1 and SGLT2 (primarily), sodium and glucose (along with water) are absorbed more effectively through the intestines than either substance by itself. This discovery has saved, by some estimates, millions of lives—mostly due to rehydrating victims of the bacterial infections, such as cholera.

But do you need glucose to absorb sodium and stay adequately hydrated? Not at all. Consider the following:

Don’t get me wrong. I’m not anti-sugar for hydration. In fact, I’ll often take 5-10 grams of dextrose (glucose) on intense training or jiu jitsu days. It gives me an extra gear. I have even recommended to high-performance athletes who want to avoid supplemental sugar that they take as much as 15 or even 20g of detrose before long bouts of high-intensity training.

All things considered, though, I prefer to give people the choice. That’s why I didn’t put sugar in my salty electrolyte supplement, LMNT. (That’s right – the only carbohydrates in the product come from citric acid, not from any form of sugar!)

Other Hydration Electrolytes: Potassium and Magnesium

After sodium and water, I consider potassium and magnesium to be next in line for hydration. Deficiencies in either electrolyte can cause headaches, low energy, and muscle cramps.

Potassium is especially important because it works synergistically with sodium to maintain fluid balance. If you don’t eat (or supplement) enough potassium, your body tries to restore this balance by selectively excreting more sodium. Unfortunately, this depletes sodium levels, which really screws up your hydration status.

To get you started: Dark leafy greens are excellent sources of magnesium, while most fruits and starchy vegetables are rich in potassium. See this comprehensive guide on electrolyte-rich foods to go deep on this topic, and remember to shoot for about 3.5–5 grams potassium per day and 400–600 mg magnesium per day.

To hit these targets you may need to supplement a gram or two of potassium and 200–300 mg of magnesium each day. This is especially important if you’re on a low-carb diet or in a caloric deficit that restricts electrolyte-rich foods or restricts larger amounts of all foods. Pro tip: smart supplementation should be done throughout the day, not in large one-time doses.

When You Need A Hydration Strategy

Many people can stay hydrated by drinking to thirst, aggressively salting their meals, and eating electrolyte-rich foods. Certain circumstances, however, call for more disciplined measures. These include:

Healthy hydration isn’t about drinking 8 glasses of water daily, but rather balancing fluid and electrolyte intakes to keep your body running smoothly. Here’s a quick recap of what we covered today:

Running through this article is a common thread: When it comes to hydration, water alone doesn’t cut it. You need electrolytes too.

That’s why we created LMNT—we wanted a tasty electrolyte drink mix with the optimal ratio of electrolytes (1000 mg sodium, 200 mg potassium, and 60 mg magnesium) to support your hydration needs. Oh and by the way, LMNT contains ZERO sugar, artificial ingredients, or preservatives.

Just dump a stick in your water bottle and you’re good to go. I generally use the raw stick pack in my morning coffee, and then one or two flavored packs depending on the day’s activities and intensities. And hey, feel free to mix up your own electrolytes, if you have time on your hands.

However you get your electrolytes, just make sure that you do. Your body will be grateful.