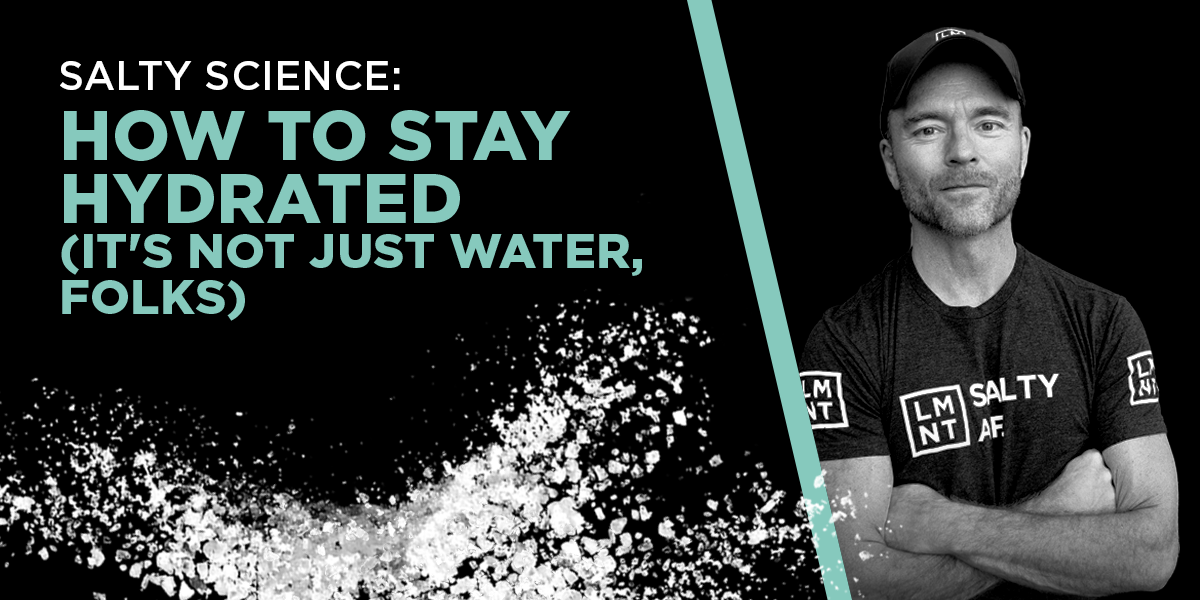 How to stay hydrated (It’s not just water, folks)

From the desk of
Robb Wolf
Science → How to stay hydrated (It’s not just water, folks)

Many people think staying hydrated is all about drinking water.

This isn’t surprising. If you look up hydration in the dictionary, you find two definitions:

Both are correct, but I like the second definition more. It better expresses my overall views on hydration.

It’s true: If you don’t drink enough water, you won’t have “adequate fluid in the body tissues.” You won’t be properly hydrated.

But the opposite is also true. Drinking too much water also throws off the fluid balance in your body. And drinking too much—not too little—is the bigger problem for athletes.

Specifically, consuming too much water leads to low salt levels in the blood—a dangerous condition called hyponatremia. Hyponatremia, as it turns out, is public enemy number one of healthy hydration.

Exercise-associated hyponatremia is rarely talked about and even elite athletes often don’t know about it. Because of this, people drink too much water, then suffer some nasty consequences. Low salt levels can even be fatal.

Today I want to take a super deep dive into this stuff: the bad advice about guzzling water, the basics of hyponatremia, the importance of electrolytes, and—of course—how to stay properly hydrated. Let’s do it.

A couple years ago, I sat down with the nutrition team of a small hospital. Nice people. I was there to brainstorm strategies for their patient population—mostly overweight folks with type 2 diabetes.

But once I saw their presentation, I knew we had a big problem. Nobody was talking about food quality.

Instead, a main prescription to help diabetic patients was—and I cringe to write this—”drink more water.” Theory being: Drinking more water fills you up and prevents overeating. Nevermind the lack of evidence for this.

The other idea tossed around was that swilling water is good because it prevents dehydration. If you listen to some people, dehydration is a widespread health crisis. Hm.

Okay, so worrying about dehydration isn’t totally crazy. If you don’t drink enough water, you won’t be able to maintain fluid inside and outside your cells. Your blood will literally have trouble flowing through your blood vessels. In other words, you’ll be dehydrated.

But let’s think critically about this. If dehydration problems showed up for anyone, it would show up for serious athletes training in warm climates. These folks lose tons of water through sweat, and should be extra prone to dehydration.

Marathoners, triathletes, and other elite endurance athletes do things most humans will never be able to do. They’re incredible specimens.

Unfortunately, a lot of them are misinformed about hydration. They follow the bad advice that drinking more water is ALWAYS a good idea before, during, and after exercise. Even when you’re not thirsty.

But according to MDAlert, there’s not a single case of reported death from sports-related dehydration in all the medical literature.

In fact, marathoners often drink huge volumes of water, pre-marathon, to “prepare” for the race. Other athletes overwater to dilute their urine. This helps them beat drug tests.

Still, drinking beyond thirst is widespread. One 2009 study published in the British Journal of Sports Medicine found that—in a sample of 197 runners—a large proportion reported drinking not when thirsty, but on a set schedule.

Constantly consuming water is advertised as healthy, but it’s not. In fact, it causes a serious problem that affects both elite athletes and regular folks alike: hyponatremia.

The Problem Of Hyponatremia

Most of the time, your kidneys—along with hormones like insulin and vasopressin—are great at maintaining fluid balance in your body. You can be thankful for that. Healthy fluid balance helps blood flow easily through your veins, and keeps your muscles and organs functioning properly.

Sodium is a super important piece of the fluid balance equation—and having too much or too little in your blood causes problems. Low sodium levels (hyponatremia) is more common than you might think, especially for athletes.

Hyponatremia is bad news. It independently predicts both heart and liver disease. Having low serum sodium can also cause muscle cramps, headaches, fatigue, mood swings, and a host of other undesirable symptoms.

Here are the major causes of hyponatremia:

If you have medical issues, seek the advice of a medical professional. I want to focus on the final cause—overwatering—because it’s easily preventable.

Hyponatremia is often mistaken for basic dehydration. In one tragic case, a soldier actually died from this misinterpretation. He was low on sodium, not low on water—and efforts to heal him with H2O only made his condition worse.

Since they sweat so much, athletes are more prone to hyponatremia than the general population. According to a review on MDAlert, 13-15% of athletes suffer from it.

Exercise-associated hyponatremia is more than just a performance detractor. Just read this excerpt from a 2007 review:

“Athletes may present with symptoms such as confusion, seizures, and altered mental status in association with serum sodium levels <135 mmol/L and are considered to have exercise-associated hyponatremic encephalopathy (EAHE).”

Yes, sodium doesn’t just regulate fluid balance; it also regulates your nervous system. Both sodium and potassium ions, in fact, must be present for nerve impulses to fire.

It should be no surprise, then, that low sodium can cause mental symptoms and brain damage. After all, the brain represents the densest concentration of nerve cells in the human body.

We’ve already covered the primary cause of hyponatremia in athletes: Drinking too much water! Beyond that, there are a couple of factoids about exercise and hydration worth sharing.

Also, your body breaks up glycogen to fuel glycolytic—or glucose-demanding—hard efforts. Glycogen, however, is not mostly glucose by weight—it’s mostly water. The water released during glycogenolysis (splitting apart glycogen) could, researchers suspect, contribute to exercise-associated hyponatremia.

Okay. Let’s shift gears now and get practical on this whole hydration thing.

This doesn’t mean, however, that you should avoid drinking water. If you don’t consume any water, you won’t last long. That’s why you should drink as thirst dictates.

But if you’re sweating like I sweat on the jiu-jitsu mat, you need more than just water. You need salt too.

This is especially true for low-carb folks like me. Since I limit my carbs, my insulin levels stay low—which causes my kidneys to excrete extra sodium. I need more salt than your average Joe. It took me a while to figure this out.

But when I did, it made a HUGE difference in my performance. It was like I flipped a switch and activated beast mode.

I know what you’re thinking. That’s cool Robb, but it’s super anecdotal. It proves nothing.

This is why I love having smart readers. They make me go the extra mile and do the hard work to make my points.

Okay then. Let’s look at a 2014 randomized controlled trial. In the study, researchers gave hyponatremic runners either a saline (high-salt) solution to drink or they injected sodium right into their bloodstream. This was after a 161 km race, no less.

Injecting sodium fixed low sodium levels of course. But what about the salty drink? Let’s see what the conclusion says.

“Administration of an oral hypertonic saline solution can be efficacious in reversing low blood sodium levels in runners with mild [exercise-associated hyponatremia].”

How I Stay Hydrated

My jiu-jitsu training is demanding. I roll 3-5 times per week, often for hours at a time with guys way younger than me. I sweat profusely during these sessions, especially when it’s muggy out.

These sessions used to wipe me out. I figured that’s what happens when you get upwards of forty.

But like I said earlier, increasing my sodium intake to around 5000 mg per day (or more) supercharged my energy levels. I felt like a different athlete out there.

Back then, I also tossed magnesium and potassium into my homemade electrolyte blend. It’s hard to get enough of these crucial minerals through diet, especially on somewhat restrictive low-carb or keto diets.

These days, I’ve simplified things even more. I just dump a packet of LMNT (my on-the-go electrolyte product) in my water bottle before jiu-jitsu, and sip on it throughout the session. If it’s 90 degrees or I’m rolling against twenty-somethings, I’ll use an extra stick to replace the electrolytes lost through sweat.

Hydration doesn’t haven’t to be complicated. Yes, you need water, but you also need electrolytes.

Most folks fail to heed the second part of this equation. They drink too much water, and don’t put enough sodium, potassium, and magnesium back.

But it’s an easy fix. Drink to thirst, and don’t skimp on the salt. Spread the word.