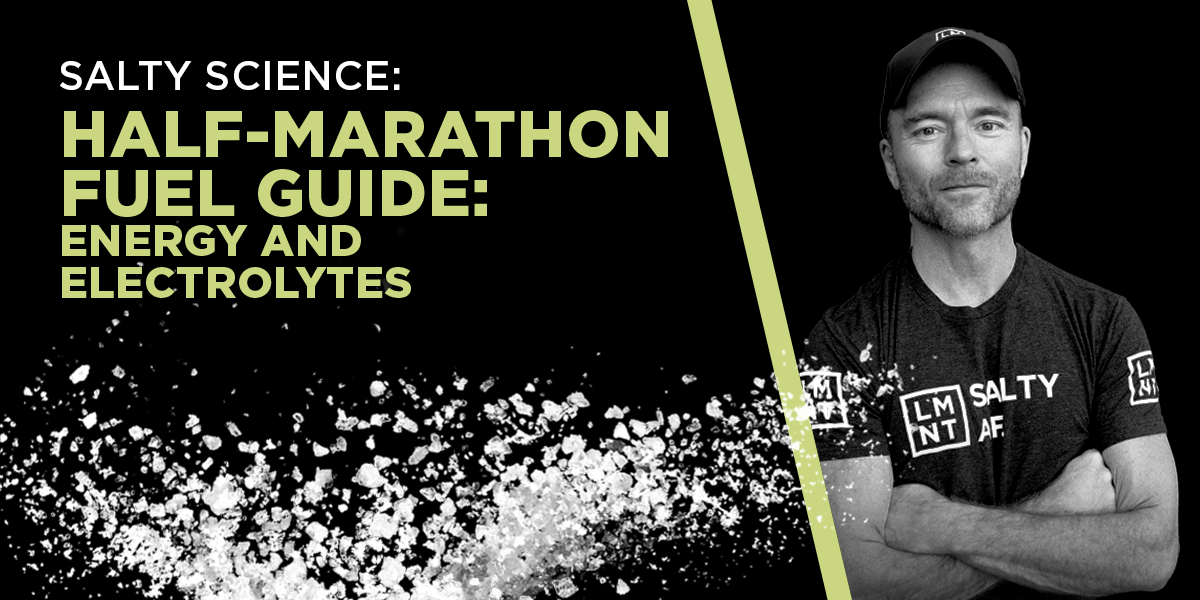 From the desk of
Robb Wolf
Science → Half-marathon fuel guide: Energy and electrolytes

Oftentimes, I get questions from folks who want to know how to fuel their half marathons, marathons, and other endurance events. They want to optimize their hydration and nutrition for better performance.

Many of these questions come with a paleo or low-carb nuance because I’ve been in that realm of health and wellness for over 20 years. So I have a good idea of how to layer in these topics. But fear not. I’m not a Paleo or keto zealot. I know that there’s no one-size-fits-all solution for diet and lifestyle, so I’ll address this subject from a broader perspective as well.

When it comes to nutrition, my broad recommendation is that folks eat nutrient-dense whole foods and avoid sugar. Of course, on race day you may need more carbs to support more strenuous, longer-duration efforts, even if you adhere to a ketogenic diet. To learn what works best for you, you’ll have to experiment with different dietary approaches (cannibalism not included) to fuel your activities. And that’s what training is for.

All the while, it’s essential to keep your fluids and electrolytes dialed in before, during, and after each run. And your hydration source matters. For instance, most people know that you shouldn’t slug cola or fruit juice to replace fluids. Well, not if you want your kidneys to like you. But fewer people pay as much attention to electrolytes. We’ll cover those vital little minerals in detail today.

I’ll start by addressing whether low-carb is well-suited for endurance training. Then I’ll cover why carbs, protein, hydration, and electrolytes are important and how to use them to set your new personal records on race day.

Before we begin, let me admit this: I’m not the world’s leading expert on endurance nutrition. Not by a mile! I’ve learned much of what I know from guys like Zach Bitter, a remarkable athlete who regularly runs 100 plus miles in a keto-fueled state. And I’ve learned from my followers, usually within the context of a keto or paleo diet. I’m also the type of masochist who reads scientific literature for fun, so I like to support my claims with published evidence when I field questions.

I once received a question from a young woman named Cassandra. She was eating a keto diet and struggling with recovery after her training runs. Adding carbs during and after her runs seemed to help, but she worried about kicking herself out of ketosis.

This raises several questions. Can (and should) endurance efforts be fat-fueled? Is it okay to have carbohydrates on a low-carb training program? And what’s the sweet spot for protein?

I’ll answer the first question by saying it depends on the person and the effort. Zach Bitter has proven that keto can fuel 100-mile runs just fine, but I would wager my retirement savings that Bitter’s fat-burning capacity would strain the Y-axis of most graphs. In other words, it’s off the charts. Also, Bitter often consumes carbs to fuel shorter, more intense efforts. The carbs fuel faster paces that tend to be more glycolytic (glucose-demanding).

The research on keto for endurance dates back nearly half a century. Back in 1980, for instance, Dr. Stephen Phinney found that obese people could walk on a treadmill significantly longer while in ketosis. Walking, however, is different from running. Running (generally) demands more glucose.

Still, some people recover best on keto. Anecdotally, there seems to be less delayed onset muscle soreness for keto or carnivore folks post-workout. But others don’t have that experience. Cassandra, for example, feels better when she includes carbs. Will the keto gods punish her for this sacrilege? Probably. But I think Cassandra should do what makes her feel and perform her best.

When To Bring in Carbs

From what I’ve seen, including carbs generally improves endurance performance and recovery. The optimal range is anywhere from 50 to 300 grams per day.

But there’s a lot that goes into this. Your choice of carbs should be context-dependent. If you need a hit of energy during the race, nothing beats 10 to 50 grams of dextrose (glucose). But if you’re carbing up afterward, starchy foods like potatoes, yams, and rice are better.

On more challenging jiu-jitsu days, I’ll include 10 to 20 grams of glucose in my LMNT (electrolyte water) per hour of training. On most Saturdays I participate in the open mat at SBG Bigfork. This consists of 5 minute rounds with one minute of rest that repeats for two hours! The glucose gives me extra energy, plus it helps a bit with sodium absorption. But to be clear, we don’t NEED sugar to stay hydrated. Read this blog for more on that topic.

The takeaway is that you should prioritize performance over carb limits. If carbs improve your energy, consume them without remorse.

Keto purists also balk at high-protein keto diets. Won’t too much protein increase gluconeogenesis and kick you out of ketosis?

This line of reasoning bothers me. We’re talking about the essential macronutrient for muscle recovery and we’re quibbling over ketone levels?

If you want to recover after a long run—or any exercise, really—you should fuel your body with protein sources that are high in branched-chain amino acids. For highly active people, this means consuming at least 1.6 grams of protein per kg of bodyweight daily. That’s about 130 grams for a 180-pound person. And that’s just the baseline. Eating between 0.8-1.0 grams of protein per pound of lean body mass each day is a great target.

Inadequate protein doesn’t just impair recovery after exercise, but also energy during exercise. Why? Because on a low-protein diet, exercise burns through your limited supply of branched-chain amino acids, causing brain tryptophan levels to rise.

Higher tryptophan levels make you sleepy. You see this a lot in cyclists who suddenly lose motivation mid-race. Not enough protein! If you catch yourself yawning in a race or training session, this may also be your body signaling that you need more protein.

Protein consumption also impacts hydration strategy. When you metabolize protein, you create several byproducts (like ammonia) that increase your water requirements. The more protein you eat, the more fluids you need.

My basic philosophy with protein? Better to get too much than not enough. Support your exercise, muscle recovery, performance, and energy. On game day, however, we can (and likely should) drop protein to maintenance levels. Just enough to avoid issues of elevated tryptophan, but not so much that we are displacing fat or carbs.

Speaking of performance and energy, we need to cover endurance hydration now. It’s not super complicated, but many folks suffer disastrous consequences as a result of rampant misinformation.

The most ubiquitous mistake is gulping water on a set schedule. Organizations like the ACSM recommend this approach, which is why you see watering stations dotting marathon courses like campaign signs on Super Tuesday.

The result is that athletes drink plain water beyond what their thirst levels would encourage. As a result, about 15% of elite endurance athletes exhibit clinically low sodium levels.

It’s called hyponatremia, and it’s the bane of endurance sports. Severe cases can be fatal, but even mild cases can cause confusion, brain fog, and fatigue.

An exercise scientist named Tim Noakes is an expert on exercise-associated hyponatremia. Dr. Noakes has treated hundreds of hyponatremic athletes that stumble across the finish line in a daze. His book, Waterlogged, is a remarkable manifesto on the dangers of overhydration.

Read the book if you get the chance. But if you want the practical takeaway for preventing exercise-associated hyponatremia, it’s this: drink to thirst.

The thirst mechanism helps your body maintain fluid balance. When body water and blood volume fall, thirst signals your conscious self to drink something and restore equilibrium.

They’re not wrong. If you drink to thirst during a long race, you’ll probably become slightly dehydrated from the sweat loss. But this is healthy, normal, and okay. We’re well-adapted to temporary dehydration.

Plus, the research suggests that dehydrated endurance athletes perform comparably to non-dehydrated controls. We don’t need constant water breaks. After all, our ancestors weren’t sipping water as they gathered berries under the blazing sun.

So I recommend drinking when thirsty during most endurance activities, half marathons included. That’s at least half of what it takes to prevent exercise-associated hyponatremia. The other 50% is getting enough sodium.

When hydrating for exercise, most people consume too much water and not enough electrolytes. This leads to poor performance, malaise, low energy, muscle cramps, headaches, and other low electrolyte symptoms.

Sodium is the big one. Salt gets a bad rep, which I’ve debunked before. But while running a half marathon, you lose significant sodium and fluids through sweat. If you don’t replace both, you’re setting yourself up for tough times.

I speak from experience. Not marathon experience, but comparably sweaty jiu-jitsu training. Before I bumped up my sodium intake to 4–6 grams per day, I felt like an arthritic sloth wrestling limber, nimble chimpanzees. Now that my electrolytes are dialed in, I feel great: like a more competitive, less arthritic sloth.

I kid. But seriously, that eye-opening experience prompted me to create LMNT with the help of my former coaches. LMNT is just sodium, potassium, magnesium, and a few natural flavors to make your water taste incredible, but it can make a huge difference in how you feel and perform.

Fueling Your Half Marathon

Nutrition-wise, there are many ways to fuel your efforts. The trick is to test in training and to find out which method works best for your body.

The hydration game is more straightforward. Just drink to thirst (not beyond it) and consume plenty of electrolytes, especially sodium. Drink electrolyte water when thirsty.

Best of luck with the run!