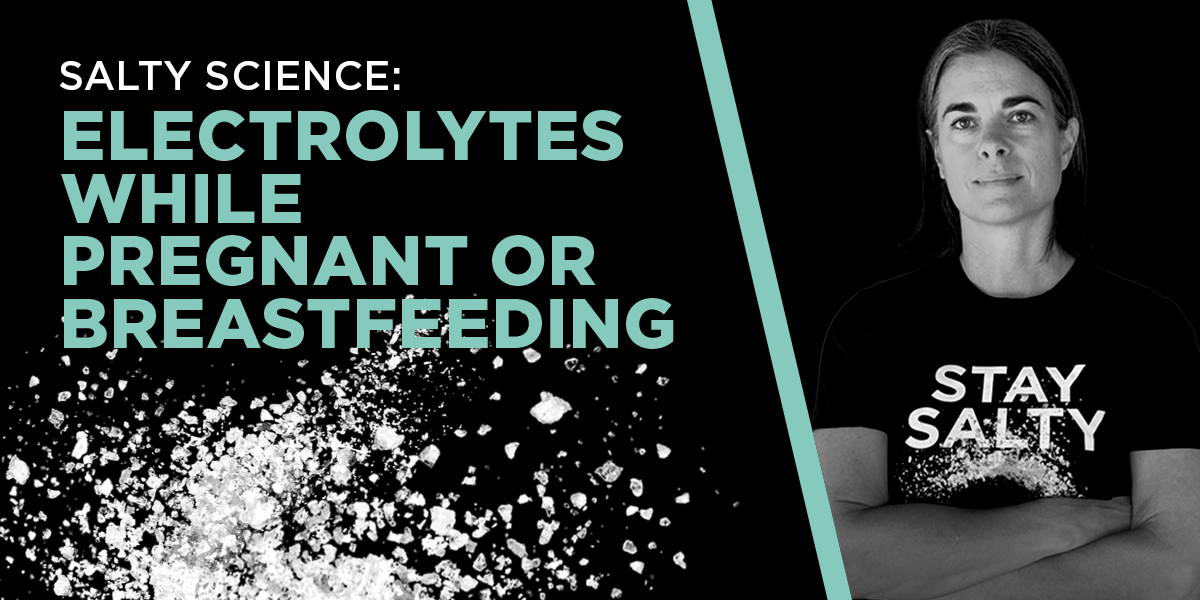 Electrolytes while pregnant or breastfeeding: What you need to know

From the desk of
Nicki Violetti
Science → Electrolytes while pregnant or breastfeeding: What you need to know

You’re probably aware that you need more nutrients—calories, protein, vitamins, and minerals—while pregnant or breastfeeding. But did you know that electrolytes are especially vital in this time?

In particular, sodium is super important. When you restrict sodium in pregnant or nursing women, it has some potentially dire consequences for both mother and child. I’m talking about low birth weights, decreased milk production, high blood pressure, impaired cognitive development, and other complications.

This is counter to conventional wisdom, which advises pregnant and nursing women to eat low sodium diets. This is wrapped up in the “low sodium is good for your heart” B.S. that we’ve debunked before.

It really is B.S. I recently stumbled on a massive study (over 100,000 people sampled!) published in the prestigious New England Journal of Medicine. Well guess what? The low sodium folks (less than 3 grams per day, right in line with government recommendations) had HIGHER risks of heart disease and death than folks eating 4 to 6 grams of sodium per day.

Nutrition During Pregnancy and Breastfeeding

How should a woman eat when she’s pregnant or nursing? This is a huge question, and I won’t be able to do it justice here. I’ll give the highlights, though.

First of all, macronutrient and micronutrient requirements go up during this time. This is unquestionable, and there’s mountains of data to support it.

A key principle is to avoid severe (and in some cases, even slight) calorie restriction. In metabolically healthy leaner women, Calorie restriction, or a daily shortage of food intake below what the metabolism demands, can stunt the growth of the fetus and compromise the quality of breast milk. It can also compromise the energy and mental focus of the mother.

Similar logic applies to moms eating a keto diet. Keto is extremely effective at reducing hunger, so special care must be taken to avoid undereating. There’s also not a ton of data on keto during pregnancy, so it could make sense to dial up the carbs to 30–40 grams. This can help to restore a bit more glycogen to cells more quickly to help with milk production and can also help to ensure fewer issues with thyroid dysfunction. The latter is something that we have seen infrequently with nursing mothers keeping carbohydrates too low. to boost insulin levels and put your body into “growth mode”.

In terms of macronutrients, protein is the big one while pregnant or breastfeeding. The standard recommendation is to bump up protein about 15 grams per day while pregnant, but this may be too low. While breastfeeding, protein needs will increase above their normal baseline requirements for mom – by 15-30 grams depending upon the individual. This protein increase can help to avoid muscle wasting, but more importantly, it is beneficial for milk quality for baby!

What about vitamins and minerals? Yep, those needs go up too.

Along with eating a whole-foods diet, consider taking a prenatal multivitamin to address these needs. The multi, however, probably won’t cover your electrolyte bases. More on electrolytes soon.

Electrolytes While Pregnant or Nursing

The main electrolytes are sodium, chloride, potassium, magnesium, calcium, phosphorus and bicarbonate. In order to maintain good health, you must get enough of these electrolytes through diet and supplementation.

This is especially true for pregnant and breastfeeding women, who aren’t only responsible for their own health, but also for the health of their baby.

Sodium is the main player here, so we’ll start there.

Salt, or NaCl, is the combined form of the electrolytes sodium and chloride. (In nature, they almost always appear together). Adequate salt intake, as I’ll explain here, is essential for the developing fetus.

How do we know this? Because when you restrict salt during pregnancy, the consequences are serious.

First of all, salt restriction has been shown to slow fetal growth and reduce birth weight, sometimes even resulting in intrauterine death. Specifically, salt restriction shrinks the cardiovascular system and impairs kidney function in the fetus. Later in life, the baby will be more likely to develop high blood pressure, or hypertension.

The sad irony is that many folks recommend salt restriction during pregnancy. The claim is that restricting sodium helps women avoid a complication called pre-eclampsia, a condition marked by high blood pressure and swelling of the hands and feet.

The data, however, doesn’t support this. One comprehensive review, for instance, found no link between salt intake and pre-eclampsia occurrence.

Sodium is a key component of breast milk. This sodium, of course, is supplied by the mother.

Sodium concentrations in human milk are elevated in the early stages of breastfeeding, when the milk takes the form of colostrum—the antibody rich secretion which seeds the infant’s immune system. Some research suggests that, if electrolytes in breast milk are inadequate, it could adversely affect the child’s health down the road.

How much sodium do women need while pregnant or breastfeeding? There’s no accepted standard, but it’s clear that preventing deficiency is a priority. I recommend most folks get at least 4–6 grams of sodium per day (about 2–3 teaspoons of salt) to avoid low sodium. Pregnant and nursing women may want to bump this up a gram or two to replace what’s going to the child.

Other Electrolytes For Pregnancy and Nursing

Sodium and chloride (aka, salt) aren’t the only electrolytes needed during this critical time. Women also need potassium, magnesium, calcium, and phosphorus. Let’s review the specifics.

To summarize this section, pregnant and nursing women should get most of their electrolytes (including salt) from diet, and supplement potassium, magnesium, and sodium to make up any shortfalls.

Obviously, electrolytes aren’t the only consideration for pregnant or nursing women.

As I mentioned earlier, getting adequate calories—especially protein calories—is paramount. Not to mention the vitamins (like folate) needed to fuel a growing child, attention to sleep, management of stress, etc.

But most people forget about electrolytes here. When a woman is pregnant or nursing, she needs enough sodium, potassium, and magnesium to support both herself and her growing child.

Bookmark this article as a reference, and come back whenever you like.