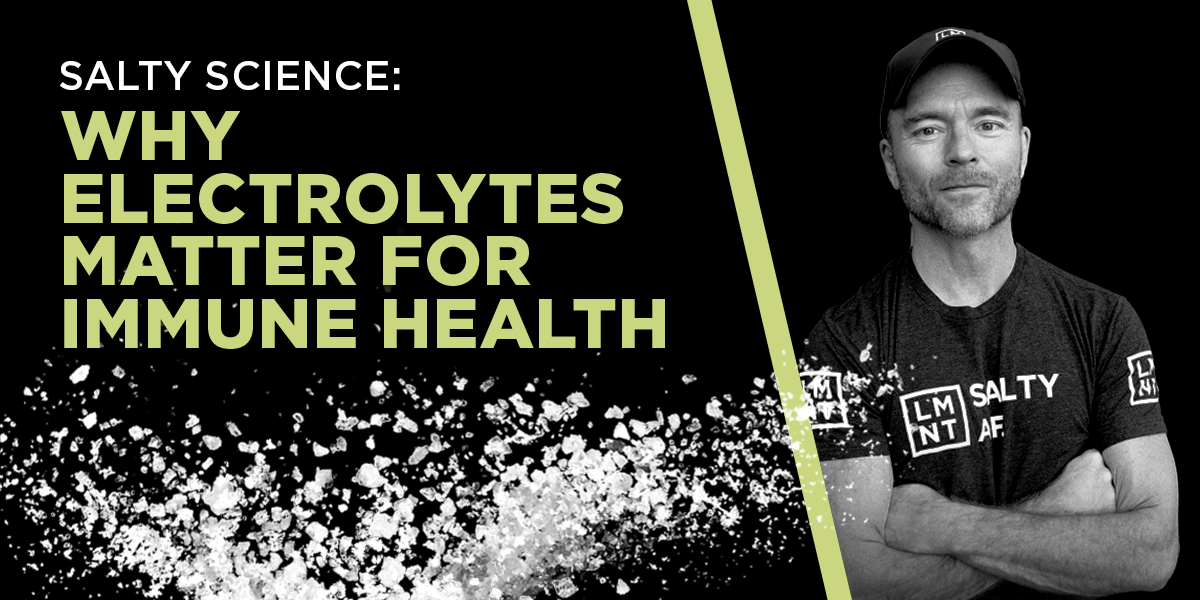 Why electrolytes matter for immune health

But like everything else in your body, your immune system doesn’t exist in a vacuum. It relies on the proper functioning of a vast constellation of cells, organs, and signaling pathways.

These pathways, in turn, require certain nutrients to run properly. That’s where electrolytes come in.

Electrolytes like sodium, potassium, magnesium, and calcium have both direct and indirect roles in regulating your immune system. They protect against infections, modulate the intensity of the immune response, and even play a role in cancer treatment.

So whether you’re sick, healthy, or in-between—you want to be getting enough electrolytes. In fact, preventing electrolyte deficiencies is essential for good immune health.

In this article, you’ll learn the basics of immunity, how electrolytes factor in, and what happens to hydration needs during infection. Sound good? Let’s dig in.

Think of your immune system like a 24-hour security team. Always patrolling, ready to mobilize its forces against intruders.

The “patrol team” takes the form of sensor proteins circulating throughout your body. When these agents identify a germ, they marshal an immune response.

This initial response is called the innate immune response, and it brings a storm of immune cells to the site of infection. These cells include:

Another word for the innate immune response? Inflammation. Depending on the context, inflammation can be either helpful or harmful. We’ll return to this later.

Sometimes, the innate immune response eliminates the pathogen. But often, the initial response isn’t sufficient to solve the problem, and your security team needs to call in reinforcements.

The reinforcements are your adaptive immune response—a team that includes T cells, antibodies, and white blood cells which specifically target the pathogen. Unfortunately, it takes anywhere from 3 to 10 days for white blood cells to form antiviral antibodies like IGG and IGA. That’s why you don’t get better right away.

It’s also why vaccines don’t immediately confer protection against disease. They activate your adaptive immune system, which takes weeks to rally the troops.

Next we’ll look at three electrolytes—sodium, potassium, and magnesium—and how they influence innate and adaptive immunity.

Sodium, or Na, regulates a myriad of functions in the human body, including:

Let’s zoom in on the last bullet. As it turns out, high sodium concentrations (especially in the skin) have a potent antimicrobial effect.

In one study, mice fed a high-salt diet (salt is 40% sodium by weight) showed increased protection against a dangerous parasite called Leishmania major. The high-salt mice had higher sodium concentrations in the skin, which triggered increased immune protection (in the form of anti-parasitic macrophages) in those areas.

To be clear, this result was in mice, and there’s no human evidence that sodium can block cancer. But those with cancer need sodium for another reason: to reduce the risk of hyponatremia.

Hyponatremia, or dangerously low sodium levels, is linked to increased mortality in cancer patients. That’s why preventing low sodium (often through intravenous saline) is a pillar of modern oncology.

Finally, those with autoimmune disease may want to avoid high sodium intakes. As you learned earlier, heavy doses of salt may activate the innate immune system. That said, many people experience remarkable improvements in their autoimmune condition when shifting to a low carb or even carnivore diet. Fundamentally, a ketogenic diet is highly anti-inflammatory—and to make it work properly, one likely needs to supplement sodium intake. So, folks with autoimmune conditions would do well to monitor symptoms when tinkering with both low carb and supplemental electrolytes. This may be a story in which sodium is a problem in the context of a modern, highly processed diet—not in the case of whole-food based, low-carb eating.

Potassium, or K, has a balancing effect on sodium. Together, they regulate blood pressure, nerve signals, and the immune system.

Specifically, potassium regulates the membrane potential, or the difference between the electrical charge inside and outside a cell. The membrane potential not only allows cells to stay powered (like a battery), but also allows for the transmission of signals within and between cells. These signals, in turn, help direct immune activity.

Potassium also balances sodium’s effect on the innate immune system. Sodium fires it up, potassium cools it down. In fact, high potassium concentrations have been shown (in the lab) to inhibit an inflammatory complex called the NLRC4 inflammasome.

But wait. Don’t you need inflammation to fight infection?

Yes, you need some, but there’s a Goldilocks amount. Too little and you won’t mount a sufficient immune response. Too much, however, and your immune system will significantly damage tissues.

Heart disease is a prime example of inflammation gone overboard. When inflammation is high, LDL particles are more likely to become engulfed by white blood cells and form dangerous plaques inside blood vessels.

Reduced inflammation may explain, in part, why a high potassium intakes are protective against heart disease. It may also explain why potassium-deficient patients are at higher risk for inflammatory kidney infection.

Found in dark leafy greens, magnesium is a mineral that does it all. Physiologically speaking, that is. For example, you need magnesium to make adenosine triphosphate (ATP), the coin that powers every cell in your body.

When someone is critically ill, their medical team needs to pay close attention to fluid and electrolyte intake. In particular, they need to ensure the patient gets enough sodium.

That’s because an infection impairs your ability to regulate sodium levels. Specifically, inflammation interferes with the secretion of antidiuretic hormone, a chemical which helps you sleep through the night without waking up to pee every three hours.

If sodium levels aren’t managed during infection, the patient may develop hyponatremia. Hyponatremia not only causes symptoms like headaches, cramps, fatigue, insomnia—it also significantly worsens a patient’s prognosis. For some infections (H1N1 influenza virus, for instance), sodium deficiency can be the cause of death.

But sodium isn’t the only electrolyte depleted by infection. Often, potassium gets depleted too.

Still, a patient needn’t have gastrointestinal symptoms to develop hypokalemia. This was illustrated in a sample of 175 Chinese patients with COVID-19, the disease caused by the novel coronavirus.

In this sample, well over half the patients (108) developed hypokalemia, and they developed it independent of GI symptoms. The good news is, the hypokalemic patients responded well to potassium supplementation.

Want to learn more about electrolytes, including how to supplement properly? Check out our comprehensive guide What are electrolytes and why are they important? Thanks for reading.