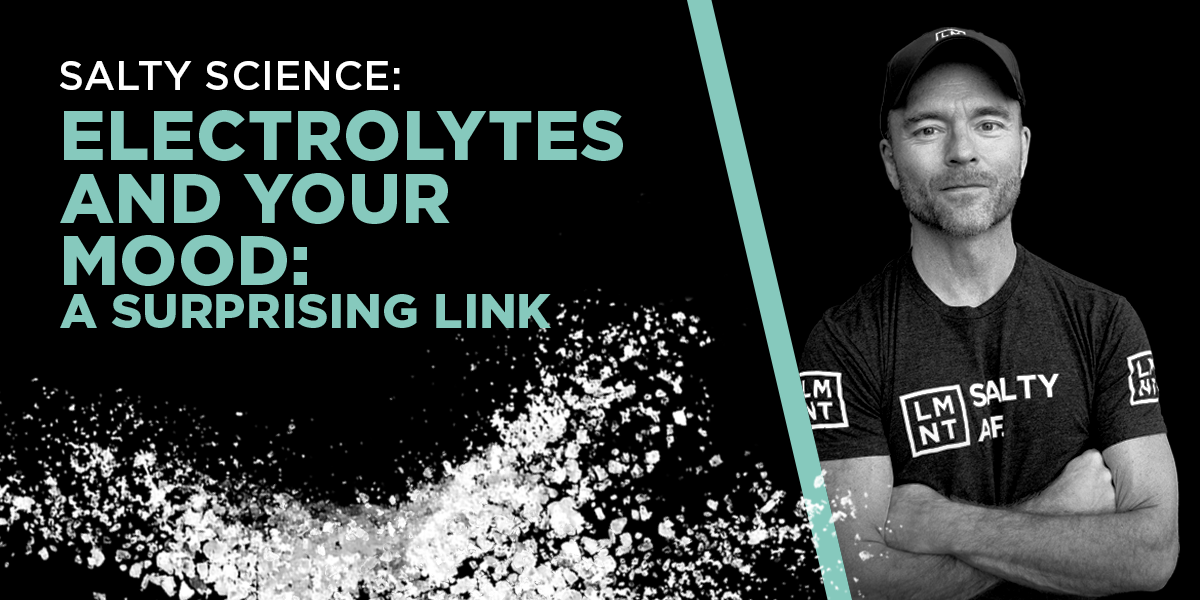 Electrolytes and your mood: A surprising link

From the desk of
Robb Wolf
Science → Electrolytes and your mood: A surprising link

When people think about mental health, and how to improve it, they probably don’t think of electrolytes first. Instead, they think about social connection, meaningful work, exercise, and—if they’re keeping up with the science—keeping inflammation low.

These areas matter. No doubt about it. But today I want to discuss why electrolytes matter, too.

Electrolytes are an essential cog in your mood-balancing apparatus. This is most obvious in anxiety and depression, the two most common mood disorders in the world.

Take the link between sodium and depression, for instance. Research has shown that when rats are sodium-restricted, they stop seeking pleasant stimulation. In other words, sodium-deprived rats became depressed.

Scientists have also studied the relationship between magnesium and mood. Magnesium supplementation, as a matter of fact, is a promising therapy for both anxiety and depression. You’ll learn more about this later.

Still, electrolytes are often the LAST thing people think about for mood alteration. I wrote this article to change that dynamic.

To be clear, I’m not saying electrolytes are the cure for depression and anxiety. They’re not. What I am saying is that deficiencies in certain electrolytes negatively impact mental health—and that these deficiencies tend to be easy fixes.

Let’s dive deep into this topic, shall we?

First, I want to briefly cover anxiety and depression. As I mentioned earlier, both conditions are linked to electrolyte deficiencies.

Let’s take anxiety first. It’s the most common mood disorder out there. By some estimates, 15% of people will, at some point in their life, suffer from the crippling nervousness, fear, and apprehension that define this condition.

When someone has anxiety, there’s a strong likelihood that they’ll also have mild, moderate, or severe depression. In other words, anxiety and depression are often “comorbid”. (Depression, by the way, is characterized by an unhappy mood and a lack of interest in daily activities).

Both anxiety and depression are highly complex, multifactorial problems. There isn’t just one cause. Nonetheless, researchers have found biological commonalities in people suffering these conditions.

One of these commonalities is the overactivity of glutamate. Glutamate is an excitatory neurotransmitter, and an overabundance of glutamate hitting certain receptors in the brain can negatively impact mood. This will come up again later, when I cover magnesium.

But first, we need to hit on sodium.

Sodium And Your Mood

Most people don’t eat enough sodium to support energy, sleep, and mood. Why not? Because the US government has promulgated a sodium-restricted diet for decades.

They say restricting sodium is good for your heart. Nevermind that the evidence points the other direction.

The clinical term for sodium deficiency is hyponatremia. Many elite athletes develop this condition (called exercise-associated hyponatremia) after an event. They drink water, but forget to replace the sodium lost through sweat. (According to The Journal of Sports Science, very active people lose up to 7 grams of sodium per day!).

The symptoms of hyponatremia are primarily neurological: irritability, headaches, low energy and—in severe cases—brain damage, seizure and death. But you don’t need to be an overwatered, severely-hyponatremic athlete to suffer the mood-deranging effects of low sodium. Dietary restriction can cause problems too.

In one 2008 study, researchers fed rats a low-sodium diet, then watched for behavioral changes. The changes were fairly striking. Instead of drinking sugar water or pressing a pleasure-stimulating lever, the salt-restricted rodents simply loafed around.

“Things that normally would be pleasurable for rats didn’t elicit the same degree of relish, which leads us to believe that a salt deficit and the craving associated with it can induce one of the key symptoms associated with depression,” lead University of Iowa researcher Kim Johnson is quoted as saying.

There are many explanations for why sodium deficiency tanks your mood. Here are the top three.

Life evolved in the salty sea, and when our ancestors crawled out of the ocean, they didn’t stop needing sodium and chloride (salt) to regulate key bodily functions. Millions of years later, descendents of these ancestors—now early hominids—began roaming the hot plains of Africa. In this sweltering climate, salt was not only hard to find, but it was also rapidly depleted through sweating.

Because of this, humans grew to prize sodium. Salty tastes would reinforce pleasure centers (aka, dopamine receptors) in the brain. So now, when we eat salt, it makes us happy.

Cortisol is a hormone, released during times of stress, that affects nearly every process (including your mental state) in your body. High cortisol, in fact, has been linked to depression, fatigue, and stress in both men and women.

Where does sodium come in? When someone is sodium deficient, their cortisol levels go WAY up. Bad news for your mood.

Sodium deficiency triggers your adrenal cortex to start pumping out aldosterone. Aldosterone, in turn, tells your kidneys to retain sodium.

This is a useful survival mechanism, but it’s not good for long-term wellbeing. High aldosterone not only raises blood pressure, but it’s also been linked to clinical depression.

Magnesium And Your Mood

Magnesium is a required cofactor for most processes in your body. You need magnesium to make bone, muscle, and even energy itself as ATP.

It shouldn’t be surprising, then, that magnesium deficiency comes with a number of neurological symptoms. These symptoms include tremors, seizures, weakness, and muscle spasms.

Magnesium may also help with anxiety and depression. Let’s review that evidence now.

There’s human evidence too. When someone is nervous before a test, they excrete more magnesium in urine, causing magnesium levels to drop. Additionally, on a population level, dietary magnesium intake is slightly negatively correlated with anxiety. Some clinical data also indicates that magnesium supplementation can have a relaxative effect, but more and better trials are needed.

Why might magnesium help with anxiety? In part, researchers believe, because magnesium blocks N-methyl-d-aspartate (NMDA) receptors in the brain. NMDA receptors are sensitive to glutamate, a chemical that—in excess—over-stimulates the nervous system. By blocking NMDA receptors, magnesium may calm this nervous stimulation.

Along with anxiety, magnesium supplementation may also reduce depressive symptoms. The mechanism is likely similar: the downregulation of the glutamatergic system.

In one randomized controlled trial, 126 adults with mild to moderate depression were given either 248 mg of magnesium or a placebo each day for six weeks. At the end of the study, the magnesium group had significant reductions in depression symptoms.

The epidemiology is promising as well. A recent meta-analysis reviewed 11 observational studies on the link between dietary magnesium intake and depression, concluding that, in general: Higher magnesium intakes were correlated with less depression.

Other Electrolytes And Mental Health

While sodium and magnesium are the major players here, deficiencies in other electrolytes can affect mental health as well. Consider the following:

Let’s zoom in on potassium for a moment, because there’s observational research showing that low potassium intakes in adolescents are correlated with depression. This is interesting, because potassium deficiency (hypokalemia) doesn’t generally cause neurological symptoms.

I suspect inflammation plays a role. Some explanation will help.

More and more, we’re learning that depression is driven by chronic inflammation. In an inflamed state, immune particles (called cytokines) cross the blood-brain barrier and have corresponding mood-lowering effects.

The most direct evidence of inflammation causing depression comes from a study I’m surprised was ever sanctioned. In the experiment, twenty men were injected with either Salmonella endotoxin (yes, Salmonella) or saline solution. The Salmonella group not only showed increased levels of inflammatory cytokines, but also also showed symptoms of anxiety and depression.

Where does potassium come in? Potassium, as it turns out, has anti-inflammatory effects. It cools down your immune response.

So maybe potassium subdues depression by subduing inflammation. Just a hypothesis, but worth chewing on.

Still here? Cool, because that was a lot of science. Here’s a quick recap of what you learned today:

I hope you found it useful, and maybe you’re viewing mood-support a little more holistically now.

For a practical guide to supplementing electrolytes, read my article, What are electrolytes and why are they important? See you back here soon.