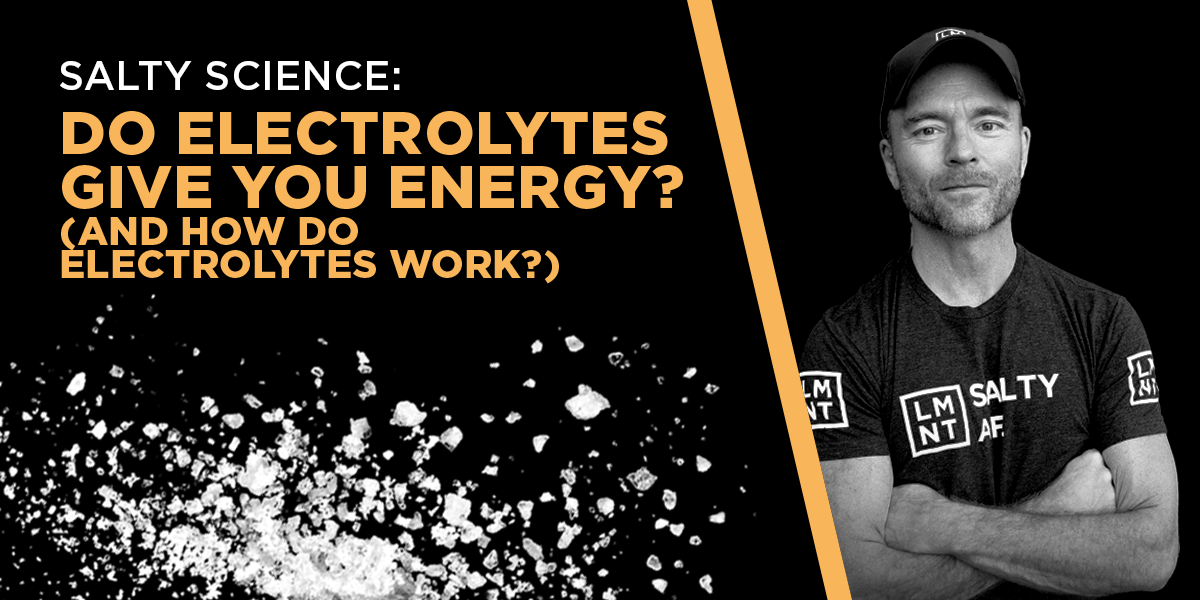 A lot of people say that electrolytes give you energy. Is that statement true or false?

It depends on what you mean by energy. Energy is a vague term that can mean multiple things. In the world of nutrition, it can mean adenosine triphosphate (ATP), calories, or a subjective feeling.

But electrolytes do not provide carbohydrate, protein, or fat calories that are transformed—via cellular respiration—into the usable energy called ATP. Electrolytes do support that process though.

Obviously, many things can sap your energy. Lack of quality sleep is often the first place to look, but I argue electrolyte deficiency is close behind—particularly for those on a low carb diet, in a period of fasting, or who do intense exercise.

If you don’t have your electrolytes handled, your energy will not be optimal. I’ve seen this play out many times, including in my own body.

When you aren’t feeling energized, it cuts into your concentration, performance, and happiness. Your quality of life is diminished.

Electrolytes aren’t a magical energy solution for everyone, but I believe they can help a significant amount of people. Maybe you’re one of them.

Electrolytes are minerals that conduct electrical charges in your body. This conduction of electricity allows the transmission of messages between cells.

This communication happens through a variety of mechanisms, most commonly through potassium channels. Potassium channels (which transport potassium ions) help regulate the beating of your heart, recycle ATP, and much more. They’re critical infrastructure for your nervous system.

Electrolytes also help govern fluid balance, or the maintenance of optimal levels of water in your tissues. Humans are about 60% water by weight, so it’s not surprising that fluid disruptions can affect perceived energy.

The full list of electrolytes includes: sodium, chloride, potassium, magnesium, calcium, phosphorus, and bicarbonate. Sodium and potassium are the key electrolytes for fluid balance, while calcium and magnesium are directly involved in ATP synthesis. I’ll go deeper on that soon.

Your body is well-equipped—thanks to your kidneys and a variety of hormones—to prevent severe electrolyte disturbances. These typically result from medical conditions or aggressive overhydration.

Mild disturbances, however, are more common. For instance, inadequate salt intake after sweaty exercise can cause weakness and fatigue. This is super common in endurance athletes.

What We Mean By Energy

They might also be talking about calories. A calorie (technically, a kilocalorie) is defined as the amount of energy needed to raise the temperature of 1 kilogram of water by 1 degree Celsius. Practically speaking, calories measure stored energy in food.

Carbohydrates, protein, and fat are called macronutrients because they provide stored energy in the form of calories. The process of unlocking this stored energy is called cellular respiration.

You might remember the Krebs cycle (also called the citric acid cycle or the TCA cycle) from high school chemistry. It has 8 steps and involves 18 separate enzymes. To avoid putting my readers into a coma, I’ll skip all that and just say this: The Krebs cycle is a method of producing energy from the byproducts of glucose and fatty acids in the mitochondria.

The takeaway is that your body is a complex machine for turning stored energy (food) into usable energy (ATP). And the proper functioning of that machine relies, in part, on electrolytes.

That’s because electrolytes like potassium, magnesium, and calcium support the complex reactions that produce ATP. Here are a few examples:

Don’t worry, there won’t be a quiz on this stuff. Let’s take this beyond ATP now.

Electrolytes support an impressive number of functions in the human body. These functions include:

Many of these functions directly or indirectly affect the subjective state we call energy. Let’s look at several more closely.

For nerve cells to communicate—including brain cells—you need electrolytes like sodium and potassium. They conduct the messages. Imbalances in sodium, for instance, cause a host of neurological symptoms including headache, fatigue, and lethargy.

Hormones are chemical messengers that tell your cells what to do. As you probably know, unbalanced hormones can throw off your energy.

Electrolytes (especially sodium) regulate many hormones that factor into subjective energy. Consider that sodium deficiency can:

Why do you think I’m always telling folks to stay salty?

Most people are confused about hydration. They think it’s just about drinking water, but it’s not.

Leaving electrolytes out of the equation can be dangerous. Many distance athletes, for instance, fall victim to the headaches, low energy, confusion, and fatigue borne of low sodium levels. Why? Because they drink too much sodium-free water. They neglect electrolytes.

I see a lot of low sodium (and low energy) in the low-carb community. Low-carbers tend to be short on sodium because:

When you bump up the sodium, the energy comes back nicely. Let me share an anecdote to illustrate.

Years ago, before I created Drink LMNT, I noticed my energy was starting to wane during jiu-jitsu training. I thought maybe it was age-related. I assumed my low-carb nutrition was perfectly dialed in, so I didn’t tinker much.

But when I mentioned my energy issues to my coaches, they gave me the following advice:

It took me about a year, but I listened. And when I did, I immediately realized I should have listened sooner. Just a couple more daily grams of sodium made a HUGE difference for me on the jiu-jitsu mat.

I believe electrolytes can be a game changer for a huge number of people. That’s why I’ve become a cheerleader for these minerals lately.

Do Electrolytes Give You Energy?

Yes and no. Electrolytes don’t provide calories, but they do support a range of processes that affect energy levels.

Electrolytes aren’t an energy booster per se, but a lack of electrolytes will sap your energy.

Let me repeat that in a slightly different way. Getting enough electrolytes doesn’t guarantee good energy. But if you’re low on electrolytes, you’re guaranteed to feel less than 100%.

Prevent that from happening by eating electrolyte-rich foods and hydrating with water plus electrolytes.

Get your electrolytes handled. It’s a small practice that can have a big impact.