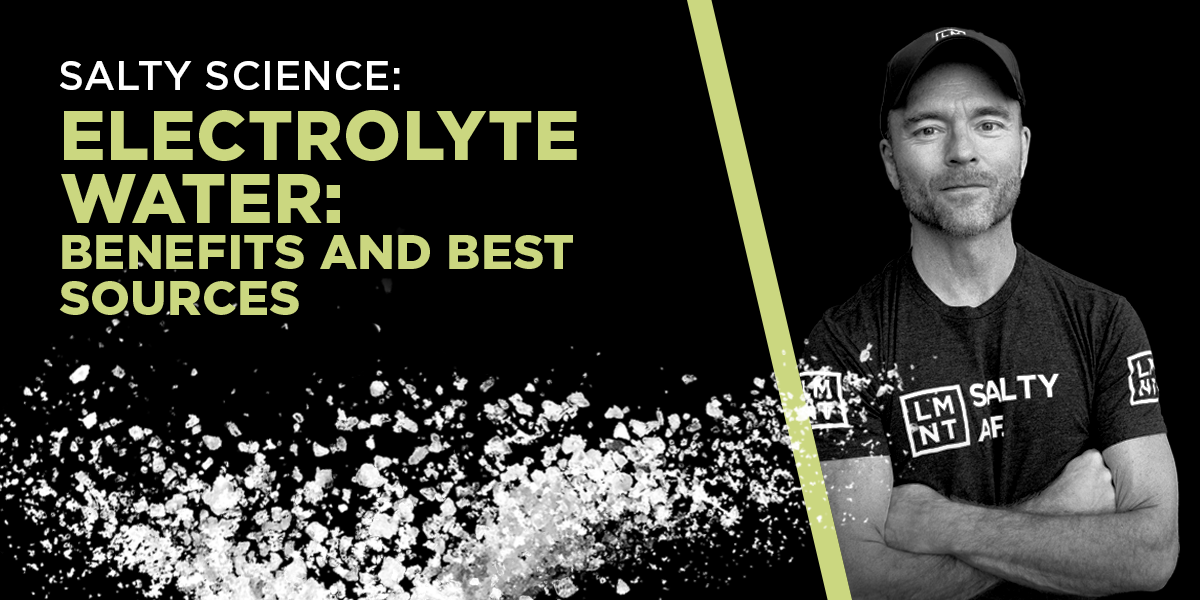 From the desk of
Robb Wolf
Science → Electrolyte water: Benefits and best sources

My main rule of hydration is simple: Drink electrolyte water when you’re thirsty. Drinking electrolytes along with water replaces what’s lost through sweat, urine, and respiration. And when you use thirst as a hydration guide, you won’t over-hydrate.

This is a “most of the time” story. If you don’t have any electrolyte water handy, or it’s just not appealing at the moment, that’s fine. And of course there are exceptions where thirst is reduced (i.e. in arctic climates). But more often than not, to “fire on all cylinders”, sipping electrolyte water to thirst is the way to go.

Back in hunter-gatherer times, following this rule meant traveling to the local brook, putting your lips to the water, and slurping away. Since the water was mineral-rich, you got plenty of electrolytes like calcium and magnesium to support bone and muscle health. In those days, you also got a nice hit of sodium from animal sources, including… blood.

Today most of us don’t have a mountain stream within walking distance, and most natural water sources contain bacteria and pollutants that you don’t want. Plus, nobody serves elk blood at parties anymore. Well, MOST parties.

We must rely on other sources of electrolytes. That’s where electrolyte water comes in.

Fortunately, it’s not an either/or situation. You can make your own electrolyte water for perfect hydration. I’ll show you how at the end of this article.

What Is Electrolyte Water?

Electrolyte water is precisely what it sounds like: water that contains dissolved electrolytes. Both ingredients are crucial for human health.

Water is fundamental to life. It’s what astronomers look for when scanning a new planet, and it’s what we humans are mostly made of.

Our bodies are about 60% water. This H2O helps us maintain our body temperature, keeps blood flowing, promotes bowel motility, brings nutrients through the intestines, and provides the substrate for most chemical reactions in our body—including the production of energy (ATP) itself. Without water, we’d be a lifeless husk.

It’s commonly reported that humans can survive only 3 days without drinking water. But according to one peer-reviewed German paper, the range is 8 to 21 days. Regardless, consuming fluids every day helps replace the water lost through urine, feces, sweat, and respiration.

But water isn’t the only thing lost throughout daily life. You also lose electrolytes.

Electrolytes are charged minerals that conduct electricity to power your nervous system and balance fluids inside and outside your cells. Electrolytes:

The electrolyte gang includes sodium, chloride, potassium, magnesium, calcium, phosphorus, and bicarbonate. The first five are the most important since phosphorus deficiency is rare and bicarbonate can be synthesized.

I generally don’t recommend folks take extra calcium, as the data on calcium pills and heart disease is a bit worrisome. Get your calcium from dairy, cruciferous vegetables, and bones instead.

The other electrolytes, however, should find a home in your water.

Why worry about taking electrolytes along with your water? What’s wrong with regular water?

What’s wrong is that we’re drinking too much of it. You’ve probably heard of the 8×8 rule. It states that we should drink 8 ounces of water 8 times per day whether we’re thirsty or not. Since its origins in the 1940s, this pseudo-logic has since spread (without a shred of supporting evidence) to the worlds of exercise hydration, military hydration, and general hydration.

Overhydration is especially dangerous in the context of exercise. When endurance athletes drink on a set schedule—when they stop every two miles for swigs of plain water—they run the risk of developing exercise-associated hyponatremia.

Hyponatremia is low serum sodium, and it’s a widespread problem in the endurance community. By drinking too much regular water, athletes dilute blood sodium levels. This leads to headaches, fatigue, confusion, seizures, and brain damage. In severe cases, hyponatremia can be fatal.

Endurance athletes are at the highest risk of exercise-associated hyponatremia, but they’re not the only people who would benefit from adding electrolytes (especially sodium) to water. Most folks don’t get enough sodium to begin with—then they wonder why their energy is in the gutter.

This is a remarkably contentious topic… ask any doctor or public health official if folks get too much sodium and the answer is inevitably “yes.” Okay—well, do folks need more processed food? Is processed food good for humans and other living things? Ask these questions and you’ll receive a resounding “no”.

My point is that context is a big deal. Folks generally obtain sodium due to a highly processed diet. There are cultures that consume a lot more sodium and a lot less refined food than the standard person in the US, yet they have fractional rates of cardiovascular disease, high blood pressure and other problems wrongly attributed to sodium.

Low-carb and keto folks are especially susceptible to low sodium. Heck, it happened to me. The fix is easy though: electrolyte water. And the benefits are worth it.

Active people lose prodigious amounts of water and sodium through sweat. Especially when it’s hot out.

Losing more water than you’re taking in is called dehydration. When you lose over 5% of your body water, the resulting state of “hypohydration” is considered severe. But even 1% water loss may impact cognitive performance, mood, and energy levels.

Dehydration is a suboptimal state, but whether it impairs exercise performance isn’t clear. In one literature review, dehydrated athletes were found to perform similarly to athletes pursuing a more aggressive fluid replacement strategy.

The bigger concern for athletes is exercise-associated hyponatremia. This can be prevented (and reversed) by adding salt to water.

Sodium is the main electrolyte lost through sweat, but active people should also strive to get enough potassium and magnesium—4.7 grams and 600 mg per day, respectively—to support blood pressure, muscle function, and energy production. A minimally-processed diet goes a long way to hit those numbers.

Both dehydration and electrolyte deficiencies can cause muscle cramps. But for active people, the problem is usually low electrolytes.

Why? Because active people tend to over-hydrate with regular water. This exacerbates low sodium, low potassium, and low magnesium levels.

Provided it contains enough electrolytes, drinking electrolyte water can prevent this problem and ward off cramping.

Electrolytes play a big role in your nervous system. These positively charged ions (called cations) shepherd electrical messages through your cellular membranes. They make it possible for nerves (and neurons) to talk to each other. As you might imagine, fatigue is a common symptom of electrolyte deficiency.

Dehydration can also sap your energy. Electrolyte water brings it back.

Diarrhea, vomiting, and feverish sweating all raise fluid and electrolyte needs. Both should be proactively replaced.

Take cholera, for instance. Without a smart rehydration strategy, this bacterial disease can easily turn fatal.

In cases like these, the smart rehydration strategy is oral rehydration therapy (OHT)—a mix of water, sodium, and glucose that’s been used globally with great results. Several popular brands carry this mixture.

You might be wondering: do you need sugar (glucose) to rehydrate? There’s certainly a lot of it in many popular sports drinks. The short answer is no, but here’s the long answer.

I’ll explain the right way to do electrolyte water in a minute. First, I want to talk about a few options I’m not crazy about.

Mineral water tastes great, but don’t mistake it for a reliable electrolyte source. You would have to drink 5 liters of Pelligrino for a day’s worth of calcium. That could get expensive.

There are two main problems with sports drinks:

Added sugar is dietary enemy #1. It’s a primary driver of obesity and diabetes in America. For my full rant on sugar, read my post on how sugar is making us sick.

Sodium is the other problem. Sports drinks don’t have enough of it. An athlete exercising in the heat can lose up to 7 grams of sodium per day. A full liter of Gatorade has only 450 milligrams of sodium, compared to about 60 grams of sugar!

Coconut water is touted as a hydration elixir, but I don’t buy it. Yes, it’s a good source of potassium with 600 mg per cup, but it only contains 252 mg sodium. That amount of sodium will not suffice on a sweaty day.

Also, a cup of coconut water has 6 grams of sugar. Six grams isn’t bad, but it’s not ideal if you’re on a keto or low-carb diet.For these folks, I’d recommend adding sodium to coconut water and using it strategically when you actually need some carbs.

I see a lot of products claiming to be electrolyte water. Then I look at the label and there aren’t any electrolytes listed.

Apparently, adding trace electrolytes for taste is sufficient to make this claim. Don’t fall for this scam. Instead, home-brew your own so you know you are really taking care of business.

How to Make Electrolyte Water

Making electrolyte water is easy. You have two options:

I used to do option 1, but that was time-consuming (not to mention, messy). Now I use LMNT, the tasty electrolyte drink mix my former coaches and I created to help folks stay energized and hydrated.

On regular days, I use one stick (1000 mg sodium) in my water bottle. On sweaty days, I use two or three. This keeps my energy up and my taste buds happy—on and off the jiu-jitsu mat.

If you’re not drinking electrolyte water yet, I hope you’ll consider starting. It’s a small change that can have a big effect on your performance, energy, and overall well-being.