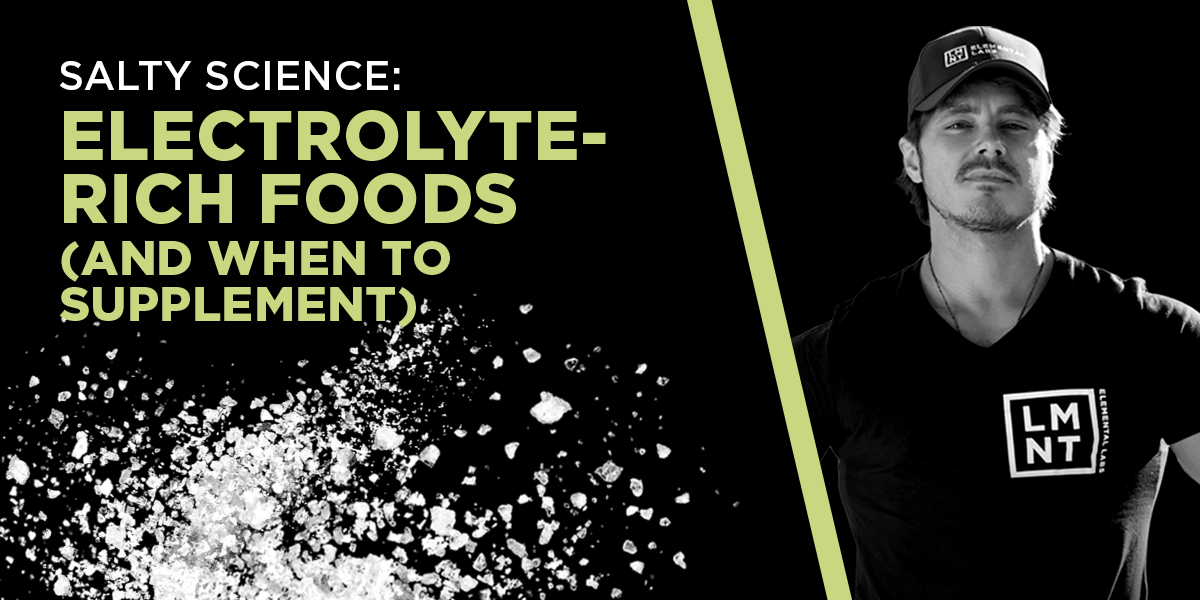 Electrolyte-rich foods (and when to supplement)

I’m a big believer in getting your nutrients—including your electrolytes—from food. There is not, nor will there ever be, a supplement that supersedes a competently formulated diet. Let me explain why.

First, when you eat foods in their natural state, it’s hard to overdo any single nutrient. There are exceptions to this rule—(polar bear liver delivers a megadose of vitamin A)—but in general, you aren’t consuming polar bear bits, and foods don’t contain toxic levels of vitamins and minerals.

Supplements are another story. Supplemental vitamin A and E, for instance, are both linked to increased (albeit relatively slight) mortality risk. Few will argue, however, against getting more of these vitamins through diet.

Second, food contains a plethora of beneficial compounds, many of which remain unidentified by science. In kale, for instance, you have anticancer isothiocyanates like sulforaphane, antioxidant carotenoids like zeaxanthin and lutein, and good portions of electrolytes. And that’s just the stuff we know about.

Finally, nutrients work better together than in isolation. The fat-soluble vitamins A, D and K are best absorbed when combined with fat. (Egg yolks, anyone?). Researchers have also discovered that whole tomatoes have more activity against prostate cancer than lycopene alone.

Still, this doesn’t mean supplements are useless. For example, electrolytes are crucial minerals that conduct electrical charges in your body. I strongly believe that targeted electrolyte supplementation can really help low-carb dieters and active individuals – and I happen to be both.

The primary electrolytes, by the way, are sodium, chloride, potassium, magnesium, calcium, phosphorus, and bicarbonate. In this article, I’ll explore which foods are highest in these electrolytes, along with basic electrolyte functions. (Note: I’ll exclude bicarbonate, which is produced inside your body). Hope you find it useful.

In nature, sodium and chloride are rarely seen apart. NaCl, also known as salt, is a package deal.

Let’s talk about sodium. Sodium regulates extracellular fluid balance (blood pressure, blood flow, etc.) and facilitates the conduction of nerve impulses. Sodium also affects many hormones, including aldosterone, renin, and vasopressin. Vasopressin, or antidiuretic hormone, helps you sleep through the night without having to wake up, stumble to the bathroom, and pee every 1.5 hours.

How To Get Enough Salt

It’s almost impossible to get enough sodium from healthy foods. For instance, meat has about 100 mg per serving—nowhere near what you need. Processed foods, on the other hand, are super salty, but I recommend you skip those in the name of health. (That’s a whole other conversation for another day!)

For healthy diets, added salt is a must. Specifically, I recommend folks get about 2.5 teaspoons of salt (about 5,000 mg sodium) per day.

Wait a minute. Isn’t that much sodium bad for your heart?

Let’s turn to the research. To summarize this 2011 JAMA paper: 5 grams of daily sodium was linked to lower risk of heart attack and stroke than sodium intake in-line with government recommendations (2 or 3 grams per day). Or for a deep dive, read this article:

Learn more: Is sodium good or bad for you?

Sodium wouldn’t be very useful without potassium. Every time your nervous system sends a message—to contract a muscle, think a thought, or ease the body into slumber—sodium and potassium ions (Na+ and K+) are there. They literally create the gradient by which nerve impulses are fired.

Potassium, like sodium, also regulates fluid balance. If the sodium to potassium ratio gets too high, fluid volume increases, and blood pressure goes up.

Even the lumbering US government understands the importance of potassium. By January 2020, the FDA will require potassium to be on every nutrition label.

Unfortunately, most Americans don’t eat nearly enough potassium. Only 3% eat the FDA recommended 4.7 grams per day. This is why I make such a big deal about potassium.

Try to get most of your potassium through food. This prevents the small risk of hyperkalemia (high serum potassium) that comes with taking large supplemental doses.

Here are some good food sources of potassium:

Admittedly, bananas, lentils, apricots, and cantaloupe are tough to pull off on a low-carb or ketogenic diet, but are included here because not everyone who reads this article will fall into that camp.

Magnesium is an electrolyte, but its function is mainly outside the realm of electricity conduction. This holds true for all electrolytes except sodium, chloride, and potassium.

What functions does magnesium serve? If I were to list them all, it would be a long trip to planet boring.

So I’ll just do the big ones. For starters, magnesium is a cofactor for about 600 enzymes in the human body. Enzymes that repair DNA, enzymes that split apart fat, all kinds of enzymes.

Magnesium is also essential for:

Unfortunately, blood tests tend to be an unreliable measure of magnesium status.R Best to play it safe and optimize dietary magnesium. (Blood tests being unreliable to determine the sufficiency of any electrolyte for maximum health benefit is generally true!)

To get enough magnesium, eat dark leafy greens. You’re unlikely to overdose on magnesium by eating too much spinach. And along with magnesium, you’ll get vitamin K, vitamin C, beta-carotene, and potassium in your system.

400 mg magnesium per day is a good target. There are some communities and experts who will argue for higher values, but much of the science on this topic is overwhelmed by pseudoscience and uncontrolled case studies. I try to eat several servings of magnesium-rich foods on a daily basis like:

Nuts and seeds, you’ll notice, appear to be good sources of magnesium. But nuts and seeds also contain phytic acid, a phosphorus-based compound which binds to minerals and inhibits their absorption. Greens are better.

Calcium just wants to help you build bone. That’s why 99% of bodily calcium is found in the skeleton.

Sure, calcium has other roles— regulating nerve impulses, affecting certain hormones, etc.—but for the most part: calcium is all about hard tissue.

Two main hormones govern calcium levels in your body: calcitonin and parathyroid hormone (PTH). When calcium levels are high, calcitonin stops your bones from releasing calcium. PTH has the opposite effect and pulls calcium from bones to rectify low serum calcium.

In other words, if you don’t eat enough calcium, your body will pillage your bones. You don’t want that.

Shoot for a gram of calcium per day by eating these foods:

Phosphorus wears many hats in the human body. It structures DNA, cells, bones, and even energy (ATP) itself.

Think about it. Adenosine triphosphate. Phosphate is just a form of phosphorus.

Phosphorus is abundant in the food supply, and deficiency is extremely rare. In fact, Americans have the opposite problem: too much phosphorus.

High phosphorus intake is problematic in part because it boosts PTH levels. (Remember PTH, the hormone that tells your bones to release calcium?) This can be bad news for bone density.

Because of this, I don’t recommend you go sniffing for extra phosphorus. But for reference, here are some phosphorus-rich foods:

Electrolytes In Food vs Supplements

Most of your electrolytes should come from diet, but let’s not be dogmatic about this. Many cases will call for supplementation.

Sodium and chloride come from the salt shaker, and you can buy magnesium and potassium in supplement form. (Skip the supplemental calcium and phosphorus).

Let’s get practical. I recommend 5 grams of sodium, 1 gram of potassium, and 300 mg of magnesium in addition to whole food sources each day. That’s why I designed my electrolyte drink mix—LMNT—to help folks hit these ratios.

To sum up this article: Get most electrolytes from food—and take extra sodium, potassium, and magnesium. Thanks for reading.