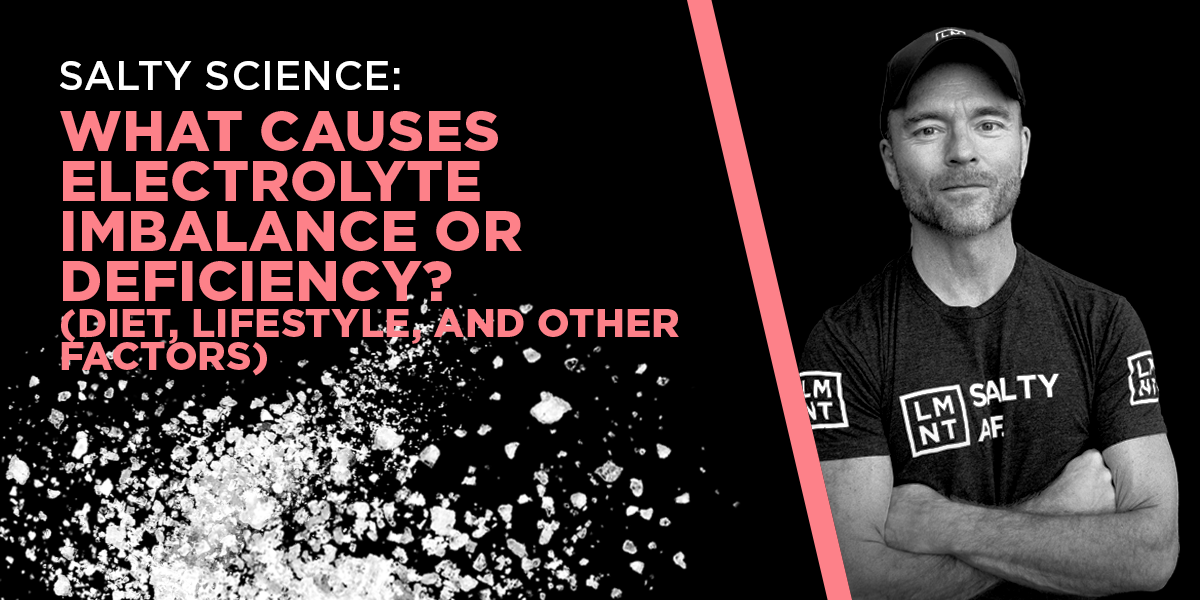 What causes electrolyte imbalance or deficiency? (Diet, lifestyle, and other factors)

From the desk of
Robb Wolf
Science → What causes electrolyte imbalance or deficiency? (Diet, lifestyle, and other factors)

I get a lot of questions like: If I eat X diet and do Y exercise, what electrolytes should I really focus on? Which ones am I getting enough of, and which am I most likely to be deficient in?

Instead of answering each question individually, I wanted to put together a comprehensive resource to cover the diet, lifestyle, and other factors that can cause an electrolyte imbalance or deficiency.

For instance, most people know that sweating raises your electrolyte needs. But fewer people know the sheer magnitude of sodium lost through sweat.

It’s well known within medical circles that low-carb diets deplete sodium levels faster than other diets. The consequences? Low energy, muscle cramps, fatigue, dizziness, and other symptoms of “keto flu.” Unfortunately, this knowledge does not often make its way to folks tinkering with their diet. Few pay as close attention to electrolytes as they do macronutrients.

Addressing this deficiency drove the creation of LMNT. Staying salty has helped a TON of low-carb folks (and their higher carb pals) feel and perform better.

But low-carb dieting is just one factor that depletes electrolytes. Fasting, hot or humid climates, intense exercise, altitude, POTS, breastfeeding, nursing, illness, and a handful of other factors are worth spending time on today.

I’ll run down this list in a moment. First, let’s clarify why electrolytes matter.

Electrolytes are charged minerals that conduct electricity in your body. Their primary roles are to facilitate cell-to-cell communication (including nerve transmissions) and regulate fluid balance inside and outside cells.

Electrolytes are crucial for life. Without them, we couldn’t think, move, breathe, or do much of anything.

The list of electrolytes includes sodium, chloride, potassium, magnesium, calcium, phosphorous, and bicarbonate. Today I’ll mostly discuss sodium, potassium, and magnesium because most folks are deficient in these electrolytes.

Electrolytes enter your body through diet and exit through sweat, feces, vomit, urine, and other bodily secretions. When one side of this equation exceeds the other, an electrolyte imbalance or deficiency can develop, leading to a variety of symptoms.

Let’s talk about the difference between an imbalance and a deficiency now. It’s a common point of confusion.

What Is An Electrolyte Imbalance?

An electrolyte imbalance is when blood levels of a given electrolyte become too high or too low. It’s a serious medical condition that will show up on a blood test.

Potential causes of electrolyte imbalance include:

Inadequate electrolyte intake may contribute to an electrolyte imbalance, but it’s rarely the sole cause. On a low electrolyte diet, your body pulls electrolytes like sodium, potassium, and magnesium from bone to restore serum levels. This won’t show up on a blood panel, but it’s still a problem.

What Is An Electrolyte Deficiency?

An electrolyte deficiency is when you aren’t consuming enough of a given electrolyte for optimal health. It’s unlikely to show up on an electrolyte panel, but your health will suffer nonetheless.

The result? A spate of subtle symptoms that range from fatigue to cramps to weakness.

Even at baseline, most people need more electrolytes. And that’s before considering other factors—sweat loss, fasting, etc.—that raise electrolyte needs. I’ll go through these factors now.

When folks move from a modern Frankenfood diet to a real food diet like Paleo or keto, I’m happy for them. Cutting out refined sugar and vegetable oils are undeniable goods.

But when you eliminate processed foods, you also eliminate a lot of sodium. And if you don’t get jiggy with the salt shaker, you increase your risk of sodium deficiency. I see it all the time.

Sodium deficiency becomes even more likely on a low-carb whole foods diet. On top of the fact that whole foods are low in sodium, you also lose sodium at higher rates.

Why? Because a low-carb diet keeps the hormone insulin low, and low insulin puts your kidneys into sodium excretion mode. You pee out sodium like a whirligig.

Finally, low-carb diets restrict excellent potassium sources like fruits and potatoes. Without some planning, a potassium deficiency is more than likely.

Fasting depletes sodium and potassium via similar mechanisms. With insulin suppressed during a fast, you lose more electrolytes through urine.

Taking electrolytes while fasting prevents these deficiencies, making the process more enjoyable. Research has also found that supplementing sodium during a fast prevents some post-fast water weight rebound. (I see lots of ears perk up when I mention that factoid.)

Sweat loss is the main lifestyle factor affecting electrolyte needs. You lose both water and sodium through sweat, and both need to be replaced for optimal health.

Unfortunately, people tend to replace only the water. This is super common in elite endurance sports and often leads to dangerously low blood sodium levels. More than a few athletes have died from over-hydrating with plain water.

Understanding that BOTH sodium and fluids must be replaced, here’s a list of factors that affect sweat loss:

Next, I’ll review special conditions that demand extra electrolytes. Keep in mind that this is for educational purposes only and shouldn’t be taken as medical advice. If you have any of these conditions, consult your physician.

POTS stands for postural orthostatic tachycardia syndrome. The defining clinical feature of POTS is a rapid elevation of heart rate upon standing.

When someone has POTS, systems that normally govern blood volume and blood pressure (important for getting blood to the brain) don’t work as they should. This leads to symptoms like dizziness, nausea, and brain fog.

Increasing sodium intake may help. Research has shown that both intravenous sodium and salt tablets can improve POTS symptoms.

Sodium is an under-appreciated mineral for prenatal and postnatal development.

If a woman is sodium deficient while pregnant, the consequences to the baby can include:

Want to learn more? Check out this article dedicated to how electrolytes relate to pregnancy and breastfeeding.

If you have an illness that causes diarrhea or vomiting, you’ll lose lots of potassium through these discharges. Other illnesses (like the flu) can cause fever and sweats, increasing sodium needs. Rehydrating with fluids and electrolytes is crucial during these times.

Any condition that interferes with heart or kidney function will likely affect electrolyte needs. For instance, those with kidney disease often have trouble excreting potassium, placing them at risk for an electrolyte imbalance called hyperkalemia.

Diving into this stuff is beyond this article’s scope though. When in doubt, consult your physician.

How To Get Enough Electrolytes

To optimize your electrolyte status, start with a baseline intake and lever your consumption from there based on diet, lifestyle, and other factors.

Based on the literature, my recommended baseline intake for sodium, potassium, and magnesium is:[*][*][*]

Assuming you’re eating a whole foods diet, the bulk of your sodium must come from either the salt shaker or an electrolyte drink mix like LMNT, which has 1000 mg sodium per stick. The benefit of drinking your electrolytes is that you prevent dehydration and electrolyte deficiency in one go. And remember, 4–6 grams of sodium is a baseline. You might need to increase that if you’re sweating heavily, fasting, eating keto, pregnant, breastfeeding, or any combination of the above.

Potassium and magnesium should come mostly from dietary sources (like green leafy vegetables), but most people will need to supplement too. An extra gram of potassium and 300 mg magnesium malate is what I recommend. One stick of LMNT contains 1/5 of these amounts, at 200 mg potassium and 60 mg magnesium. You can try our 4 most popular flavors in the Variety Pack to get a feel for your favorites, or try making your own mix at home. Up to you!

Bottom line? Tune your electrolyte strategy (especially your sodium strategy) to your specific needs and you’ll be in good shape to prevent an electrolyte imbalance or deficiency. I hope you found this guide useful.