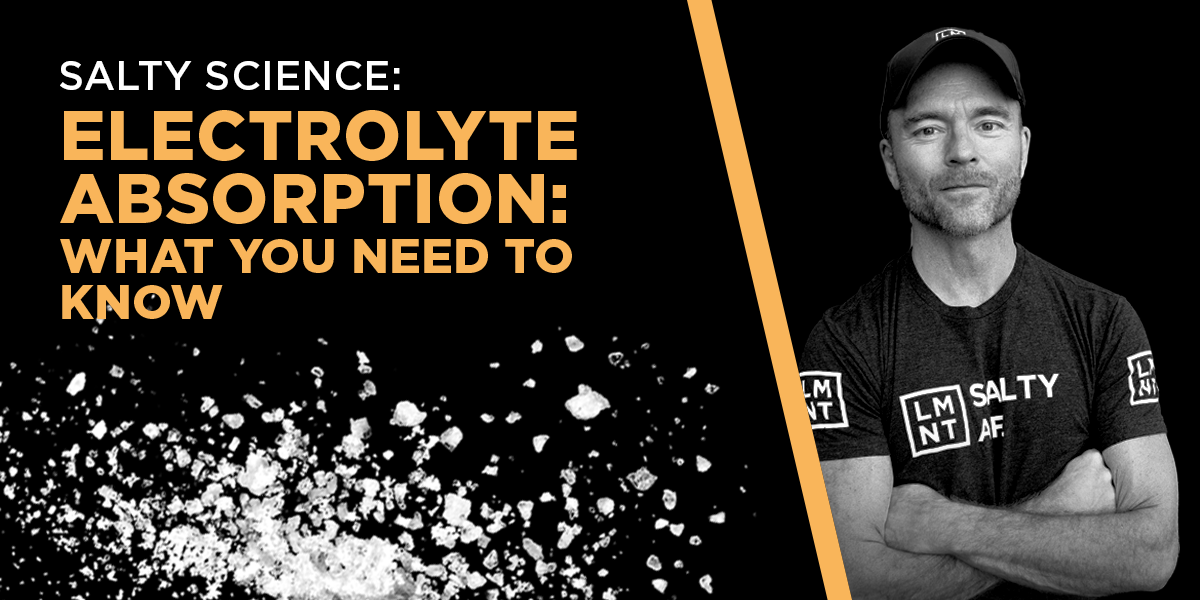 Electrolyte absorption: What you need to know

From the desk of
Robb Wolf
Science → Electrolyte absorption: What you need to know

As a mostly protein and fat-fueled guy, I’m a big believer in only using glucose when I need it. The truth is, I don’t want a hit of sugar every time I supplement sodium, potassium, or magnesium. Many of my followers feel the same way.

You might have heard that adding sugar to electrolytes boosts hydration – this isn’t false. Glucose does help transport sodium, chloride, and water across the intestinal barrier.

Because of this, some claim you need glucose for proper hydration. Without glucose, they say, you’ll be short on both electrolytes and energy. But these folks are confused about the science.

While glucose may boost performance in some situations—like when I roll with 25-year olds—most situations don’t call for it.

Yes, you can hydrate and power your body just fine without glucose. I’ll explain more later after we cover the basics of hydration.

Why You Need Electrolytes

Along with water, your body also needs sodium, calcium, magnesium, potassium, and chloride. These minerals—called electrolytes—regulate a staggering number of processes in the human body. For instance:

We absorb electrolytes through food and drink, and excrete them through sweat, urine, and feces. If one side of this equation becomes skewed (from heavy sweating, diarrhea, etc), an electrolyte imbalance can result. Electrolyte deficiency in particular leads to symptoms like fatigue, headaches, and muscle cramps.

If you don’t take electrolytes after sweating, you’re prone to feel lousy. This is especially true if you practice fasting or follow a low-carb or ketogenic diet.

I only realized it myself relatively recently after my former coaches helped me dial in my electrolytes. When I added more salt to my low-carb diet, not only did my jiu jitsu performance increase, but my everyday energy increased too.

Okay, let’s say you’re on board with electrolytes now. But what about the whole glucose for hydration thing?

Do You Need Sugar To Absorb Electrolytes?

The short answer? No.

Yes, glucose helps you absorb sodium, chloride, and water. But no, glucose is not necessary for healthful hydration.

Let’s quickly cover the history here. Then we can unpack the truth about glucose and electrolytes.

Take a little trip back to 1960. That’s when Dr. Robert Crane proposed his “cotransport hypothesis” for sodium and glucose.

No longer a hypothesis—but rather, solid science—the idea Dr. Crane proposed is that sodium and glucose join forces to increase one another’s absorption in the gut. This “cotransport” of glucose and sodium through the intestine is mediated by proteins called SGLT1 and SGLT2 in your gut. (As an aside: an FDA-approved class of diabetes drugs called SGLT2 inhibitors work by reducing glucose absorption to lower blood sugar levels. Another group of drugs called SGLT1 inhibitors have shown similar effects, but are still awaiting FDA approval).

Clinically, administering a mixture of glucose and sodium is called oral rehydration therapy (ORT). ORT has rehydrated countless people after extreme bouts of diarrhea, often due to cholera. According to some sources, ORT has saved millions of lives.

So yes, adding glucose to an electrolyte solution can increase hydration. It’s a useful tool in the disease-management toolkit. But it’s not the only cotransporter in town. And for those of us who don’t want to drink loads of sugar (linked to pro-inflammatory states), that’s great news.

Other Ways To Absorb Sodium

First of all, you can absorb sodium all by itself in the small intestine. This happens either passively through diffusion, or actively with the help of a sodium transporter.

It’s easier, however, for your gut to absorb sodium with a cotransporter. The process requires less energy than absorbing sodium alone, and therefore is “preferred.”

You already learned that having glucose present increases the passage of sodium through intestinal cells. But there are some other sodium cotransporters:

To really hammer this home, let’s see what happens to sodium when you restrict glucose completely.

Sodium Levels With No Glucose

When someone says you need sugar to absorb electrolytes, I like to reference a super interesting study from back in the day. Granted, it was published in the 70s and only had one subject. But I think it says a lot about fasting, ketones, and hydration.

In the study, researchers took a 456 pound man and fasted him for 382 days. Besides a few multivitamins and electrolyte supplements, he only drank water.

At the end of the fast, the morbidly obese gentleman was down to 180 pounds. He suffered “no ill effects” from the fast, according to the authors. That alone is incredible. But I want to double-click on his blood electrolyte levels over the course of the fast.

As expected, his serum electrolytes dropped initially. But after 100 days, his sodium and potassium stabilized to more or less normal levels. This was without supplementation for most of the study.

What happened, I believe, is that ketones—massive amounts of BHB generated during the fast—helped him absorb sodium. Other studies also show a ketogenic diet to be perfectly compatible with healthy sodium levels.

This simply wouldn’t happen if you needed glucose to absorb electrolytes.

Let’s talk carbs for exercise performance now. On this topic, I often hear people say something like:

Sure, low-carb diets work for low or medium intensity exercise, but you need carbs to fuel harder efforts.

This makes sense. Intense exercise is glycolytic, and forces cells to use glucose for energy. If one performs enough glycolytic exercise, they deplete their stored glucose and glycogen stores must be refilled. That’s why the standard advice is to “carb up” before track workouts, marathons, jiu jitsu sessions, etc.

But here’s the thing. You have glucose in your blood on a low-carb diet, just less of it. Fatty acids—not glucose—cover most of your energy needs in fat-adapted state.

That includes exercise needs. Ketogenic diets, in fact, have a glycogen-sparing effect. In other words, you can exercise longer before depleting your stored glucose.

As a side note: for body composition purposes, standard keto was the clear winner. More fat was lost and more muscle was retained.

To be clear, these effects were seen in resistance-trained men. Maybe other populations—athletic women, perhaps—would fare better on a carb-cycling protocol. There’s plenty of anecdotal evidence that a cyclical ketogenic diet works best for some people.

Depending on my level of training, that includes me.

I train Brazilian jiu-jitsu three to five times per week. Before each session, I take a stick of LMNT electrolytes in 16-24 ounces of water. This replaces the sodium, potassium, and magnesium I know I’ll lose through sweat.

Most of the time, I only take electrolytes. Totally fat-fueled. But depending on my competition and training duration, I occasionally use targeted doses of glucose to augment my performance. (You can easily find glucose powder or tablets online.)

Play around with my protocol to suit your needs. If you’re training hard, it makes sense to have glucose on hand. But it needn’t be an everyday thing.

To recap my main points:

Here’s the thing. If you’re training in a fasted state or on a low-carb diet, you probably need more electrolytes. Especially sodium. But glucose? That varies greatly from person to person, regimen to regimen.

That’s why my former coaches developed their electrolyte protocol. That protocol and the lack of sugar-free options on the market ultimately led us to launch LMNT.

Each stick pack contains a science-backed ratio of sodium, potassium, and magnesium—the real keys to hydration—without any sugar, fillers, or dodgy ingredients. Instead, we use stevia to sweeten LMNT, our preferred keto-friendly sweetener.