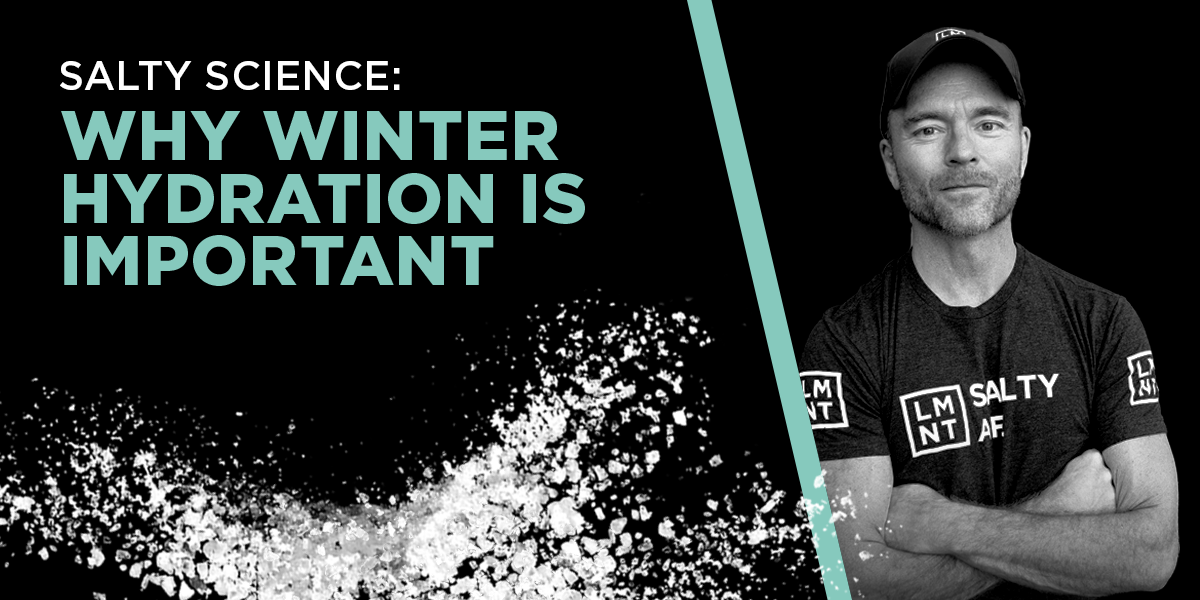 Why winter hydration is important

When it’s cold outside, hydration is probably the last thing on your mind. You might go for hours on the ski slope without a single sip of water. I get it. In the winter months, it doesn’t seem like you’re sweating much. And thirst doesn’t arise as it does in summer heat.

Yet both cold and high altitudes create deceptively challenging hydration situations. You may not feel super thirsty, but you are losing fluids and electrolytes. Yep, these situations can actually increase your body’s hydration needs. I’ll explain why in a bit.

But the opposite problem—drinking too much water during winter activities—needs airtime too. When winter athletes pound too many fluids without adequate electrolytes, they can develop a dangerous low-sodium condition called exercise-associated hyponatremia.

The point is when it’s nippy out, we need to find a balance: a Goldilocks amount of fluids and electrolytes. Not too little, and not too much. So all you skiers, snowboarders, sledders, ice skaters, alpinists, cold weather runners, snowmobilers, and driveway shovelers—this one’s for you. Let’s talk about how to stay hydrated throughout the winter.

When you maintain optimal fluid balance, it means your blood flows nicely through your veins, your brain floats nicely in your skull, and your organs stay at the right size. We humans are mostly water weight, after all!

Hormones like aldosterone, renin, and angiotensin do most of the fluid balancing work for you. These hormones tell your kidneys to retain or excrete water and electrolytes, depending on your current hydration status.

Your job is easy: To put water and electrolytes into the system.

But easy doesn’t mean simple. There are four ways people get it wrong:

Numbers two and three tend to be the biggest points of confusion. Advice to drink eight glasses of water per day, for instance, does NOT encourage healthy hydration. It just dilutes blood sodium levels.

And as for number three… the US government has been warning against sodium since the early 1980s, mostly on the back of old animal data. More recent human studies, however, suggest that upwards of 5 grams of sodium per day is optimal, depending on the population. To really nerd out on this topic, check out my comprehensive post on sodium.

The big takeaway is that most folks need more salt. Especially those who live an active lifestyle or follow a low-carb diet. When folks don’t get enough sodium, fluid balance gets thrown out of whack.

If I could sum up healthy hydration in a sentence, my golden rule would be: drink electrolyte water to thirst.

Thirst is usually an excellent guide to hydration needs. It’s a tightly regulated system, honed over millions of years of evolution.

But it’s not perfect. For example, both cold and high elevations can detune the thirst mechanism. On top of that, winter weather and altitude can deplete fluids. Keep reading.

A few hours shoveling or skiing can significantly deplete water and electrolytes, but folks pay less attention to fluid balance in these conditions. It’s nothing like the jungle heat, right? Wrong. If you live in a cold or seasonally-cold climate, staying hydrated requires special care.

In 1764, a man named Sutherland noticed that, after a cold bath, his urine volume increased. This “cold-induced diuresis” was confirmed by studies centuries later.

In the 1970s, researchers discovered that sodium excretion also increased after cold exposure. They speculated that, since cold exposure raises blood pressure, this might signal the kidneys to expel sodium and fluids at unreasonable rates.

In the cold, the rate at which you use energy (your metabolic rate) increases to keep you warm. The warmer you get, the more you sweat out water and sodium.

You also lose more water through your breath when it’s chilly. In one case study, respiratory water loss for a full day of activity was nearly double at -4°F compared to 77°F.

Three to four layers of heavy gear might be perfect for lounging outside the ski lodge in 27°F, but that same gear gets sweaty FAST on the slopes. Then you wonder why nobody wants to ride the ski lift with you.

Finding the perfect amount of gear requires some tinkering. The goal is to stay reasonably warm, but minimize perspiration. If your gear gets soaked with bodily fluids, that also increases the risk of hypothermia when you stop moving.

If you’re playing tennis in the summer heat, the water bottle is never far away. But on colder days, the intuition is to leave it behind.

This intuition is wrong. If you read points 1-3, you’ll certainly understand why you need water and electrolytes on cold days.

Water can also freeze. If you bring a non-insulated bottle, you may find a useless hunk of ice in your jacket pocket.

During survival experiments in arctic temperatures (no, thanks!), participants didn’t report thirst until they came inside and warmed up. They were clearly dehydrated from the cold, but their bodies didn’t tell them.

When you hit 16,000 feet above sea level (and likely lower), your thirst mechanism doesn’t work properly. You don’t get thirsty when you should.

Not a wonderful feature of the human body. You need fluids and electrolytes dearly at altitude because:

So you’re losing fluids through sweat and urine, and you’re not thirsty to replace them. Double whammy.

A good rule for hydration at elevation? The higher you are above sea level—and the harder you’re working—the more consciously you should sip electrolyte water throughout the day.

Until now, I’ve talked mostly about the dangers of under-hydrating in the cold. Many forces—broken thirst, heavy clothes, sweat loss—work against us here.

But this doesn’t mean that more water is always better. It’s not. In fact, an overly-aggressive fluid replacement strategy can dilute blood sodium levels, leading to hyponatremia.

The symptoms of hyponatremia are no joke. Early symptoms include headaches, cramps, and fatigue. As sodium levels continue to fall, confusion, seizures, and even brain damage follow.

The worst cases of hyponatremia can be fatal, and a number of endurance athletes have perished from this condition. How many have died from dehydration? In all the medical literature, not one.

In other words, preventing hyponatremia should be the foremost goal of endurance hydration.

Heard of the Iditasport Ultramarathon? It’s a 100 mile run through the snowy wilderness of Alaska. This makes a normal marathon look like a morning manicure. Only the bravest endurance athletes take on the Iditasport.

Unfortunately, not all these athletes get their hydration right.

In one study on 16 Iditasport runners, 7 were hyponatremic following the race. These low sodium seven, it was found, consumed more water and less sodium throughout the race than the other 9 runners.

“In conclusion,” the authors wrote, “hyponatremia is common in an ultraendurance race held in the extreme cold, and may be caused by excessive fluid consumption and/or inadequate sodium intake.”

Don’t be fooled by the chilly temps. Hydration often requires more attention in the wintertime than in the summer.

And then there’s thirst, which doesn’t function properly in the cold or at elevation. Thanks, human body!

To compensate, drink electrolyte water throughout your winter activities, sipping beyond what thirst dictates. This water should contain enough sodium (about 1 gram per 20 to 30 ounces) to mimic healthy blood sodium levels and prevent hyponatremia.

You can always mix your own saline solution by adding half a teaspoon of salt to your water bottle. I did it for years, but I was tired of the time-consuming, messy prep work.

However you choose to proceed, I hope you handle your winter hydration. It will keep your body jolly through the season.