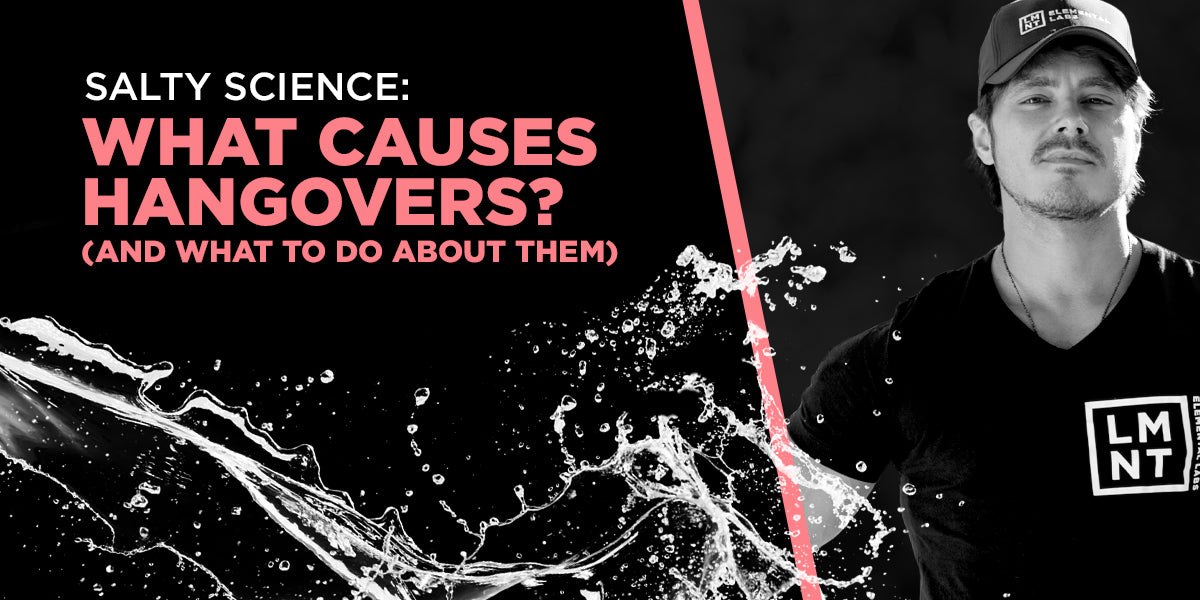 What causes hangovers? (And what to do about them)

From the desk of
Luis Villaseñor
Science → What causes hangovers? (And what to do about them)

Looking back, I’ve had mornings that make The Hangover look like a children’s film. Okay, not that bad, but it felt awful. My head throbbed, my stomach hurt, and my energy was zapped. Bradley Cooper was just acting. Real hangovers are much worse.

Now, I avoid putting myself in that position and I take the necessary steps to replenish lost nutrients and minerals. After all, the best way to fix a hangover is to avoid getting one in the first place. That might mean cutting yourself off, and not opening that second bottle of wine. But I know moderation doesn’t always happen.

So when people ask me about hangover remedies, I don’t judge, but I gently remind them that large doses of alcohol are bad for you. The damage to the gut and liver can’t easily be undone. It accrues over time, culminating in conditions like alcoholic liver disease that you don’t want.

This isn’t a revelation. Light drinking is probably okay for most people, but heavy drinking will demolish anyone’s internal organs. You want to minimize it.

Still, I recognize we’re social animals. If you do over-imbibe, all is not lost. There are still things you can do to mitigate the hangover and replenish key nutrients and minerals. But the question is: how? And what causes the hangover in the first place?

You’re about to get your answers. First, I want to talk about the liver.

How We Metabolize Alcohol

When you ingest alcohol, your liver freaks out. It views any amount of alcohol (also called ethanol) as a toxin. This toxin must be processed and cleared as soon as it can be done.

Needless to say, alcohol doesn’t arrive at the liver instantly. First it must be swallowed, pass into the small intestine, and get sucked into the portal vein. From there, the portal vein shuttles the alcohol to the liver.

The liver is your largest internal organ, just as crucial for survival as your brain and heart. It regulates blood sugar levels, manages cholesterol, helps digest food, and aides in blood clotting. But the liver is best known for detoxification.

The liver first detoxifies ethanol with three sets of enzymes: alcohol dehydrogenase (ADH), the microsomal ethanol oxidizing system, and catalase. Don’t worry about remembering catalase and the other one. ADH does about 80% of the work.

The term “detoxifies” is a little misleading, though. In fact, ADH turns ethanol into another toxin, acetaldehyde, that’s more toxic than ethanol itself. Fortunately, the liver has enzymes like aldehyde dehydrogenase (ALDH) to clean up the mess.

Here’s a quick review to solidify your memory.

Obviously alcohol isn’t zapped into water and carbon immediately. The process takes time. And when someone drinks loads of beer, the liver can’t keep up. Now we’re in hangover territory.

Hangover is a catch-all term for the headaches, weakness, dry mouth, muscle aches, nausea, vomiting, stomach pain, light sensitivity, dizziness, and shakiness that may follow alcohol intoxication. The severity of the hangover depends on several factors.

The first two factors are straightforward. The more alcohol the liver must process, and the less time to process it, the greater the chance and the severity of the hangover symptoms. Most people know how many drinks they can tolerate without suffering the next day.

This drink limit, however, will vary from person to person. Why? Because some people are able to metabolize alcohol more efficiently than others.

For instance, Asian people are more likely to have an inactive form of aldehyde dehydrogenase. With inactive ALDH, it takes fewer drinks to cause a hangover.

Finally, alcohol disrupts the delicate balance of fluid and electrolytes called hydration. The good news is, hydration is within your control. More on that soon.

Most people think that alcohol causes hangovers. But that’s not technically true.

Indirectly, sure. Drinking alcohol means headache, fatigue and nausea the next morning. But it’s not the ethanol itself that makes you feel like a drugged badger who just ate expired tuna salad.

Other forces are at play. I’ll list them here.

You remember acetaldehyde. It’s the nasty toxin jammed in the middle of alcohol metabolism.

The liver works hard to convert acetaldehyde to acetate. But when too much alcohol enters the body, acetaldehyde builds up faster than the liver can clear it. And the tides of war turn.

Centuries ago, Shakespeare noticed that consuming alcohol increased the volume of his urine. This observation has since been confirmed by scientists and more than a few inebriated humans waiting in line for the Port-O-Potty.

Yes, alcohol consumption has a diuretic effect, meaning it increases fluid loss through urine. And when more fluids leave the body than enter it, that’s called dehydration. The symptoms of dehydration—headaches, lethargy, dry mouth and dizziness—align nicely with our list of hangover symptoms.

Electrolytes are charged minerals that conduct nerve impulses and balance your body water. How you feel is tied to electrolyte levels, and alcohol throws these levels off.

In other words, electrolyte deficiencies—provoked by drinking alcohol—can cause hangover symptoms. Here are the main deficiencies to watch:

Even small amounts of alcohol damage the gut, springing leaks in the delicate barrier separating your intestines from your body. This is called leaky gut.

When the gut becomes leaky, particles slip into the bloodstream, and a confused immune system attacks. Now you have inflammation, which in turn creates digestive symptoms that exacerbate hangover symptoms.

Beyond moderation (or abstention), there are two main ways to mitigate hangover symptoms:

A variety of herbs may alleviate hangover symptoms. Prickly pear extract, for instance, has been shown in a clinical trial to reduce nausea and dry mouth. Ginger can also soothe an upset stomach. These herbs won’t undo last night. But they might make you feel better.

On the hangover prevention side, a compound called dihydromyricetin (DHM) has been shown (in mice) to speed the clearance of acetaldehyde. Many companies market DHM as a hangover cure, but this is a specious claim. Be suspicious of these companies.

Heavy drinking raises the risk of dehydration and electrolyte deficiency. With a hydration strategy, some of this is preventable.

Take sodium, potassium, and magnesium along with your water. Imbibing can deplete phosphorus too, but most people get enough phosphorus through diet.

Try sipping on electrolyte water before, during, and after the party. Pre-load a few water bottles with LMNT, and you’ll be better prepared than most.

Yet, no amount of hydration planning will immunize you against hangovers. If you drink too much, your body will suffer. The best way to prevent a hangover is to be smart with alcohol. Less is more, as they say.