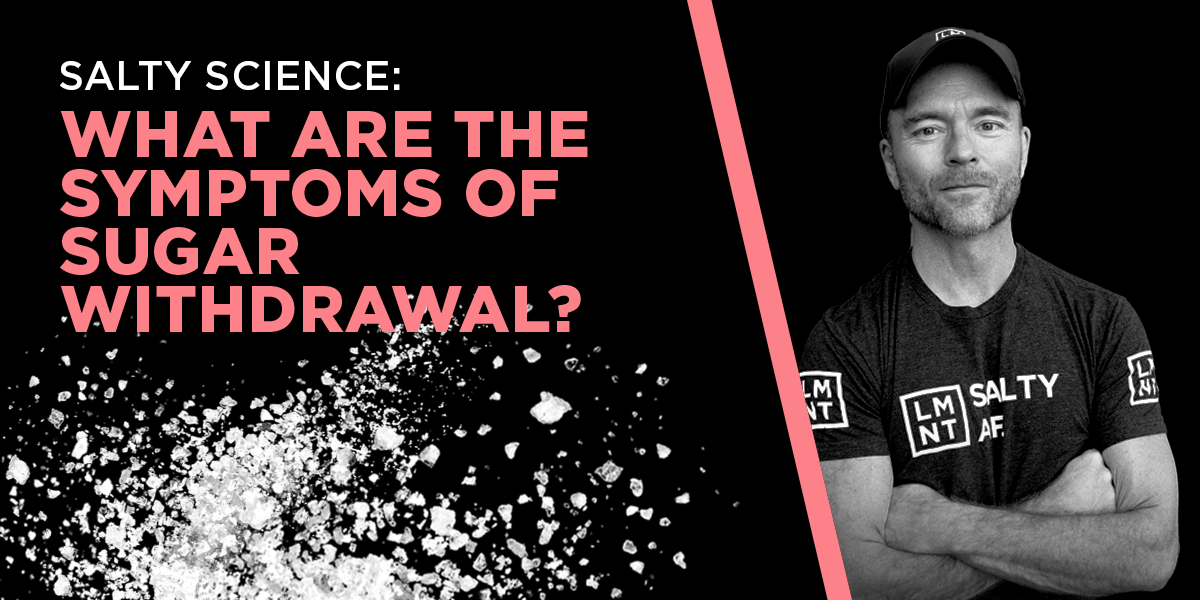 What are the symptoms of sugar withdrawal?

From the desk of
Robb Wolf
Science → What are the symptoms of sugar withdrawal?

If you suddenly and dramatically reduce your sugar intake, you may experience sugar withdrawal symptoms. I’m talking about headaches, brain fog, irritability, and malaise—all from making a positive dietary change. Kind of a raw deal right? Do something good, feel terrible!

Ideally, we’d be positively reinforced for making a choice for our health. But that’s not always what physiology dictates — at least in the short-term. No, our habitual bodies prefer consistency, particularly with dopamine-rewarding molecules like sugar.

This means that sugar withdrawal—which has a neurochemical basis—happens to many people trying to clean up their diets. You’re not alone.

But sugar withdrawal isn’t always to blame for the symptoms. For instance, if you neglect electrolytes on a low-carb diet, you’ll likely experience similar issues. The spectrum of symptoms commonly described as “keto flu” has several potential causes. I’ll cover those causes later, along with potential remedies.

But this article is mostly about sugar: the industry, how sugar makes us sick, the widespread addict-like use of it, withdrawal symptoms, and healthy sugar alternatives. It’s meant to be a resource to help you (and others) understand and combat the pull of sugary foods.

The Salty Truth About Sugar

Sugar is big business in the United States. Every year, the average American consumes over 77 pounds of sugar and sugar derivatives.

The government isn’t helping, either. The sugar industry receives about $4 billion in annual subsidies as price support, tariffs, and crop loans on its way to producing 9 million tons of sugar per year.

Like many industries, the sugar industry has a sordid past. When Columbus “discovered” the New World, Europeans found sugar cane there and started refining it to a white powder. This “white gold”, unfortunately, was harvested on the backs of enslaved Africans for centuries to come. If you want to learn more, I highly recommend this New York Times article on the barbaric history of sugar.

It’s also clear that sugar isn’t good for our collective well-being in the present. High-sugar diets have been linked to obesity, type 2 diabetes, cognitive decline, chronic inflammation, heart disease, cancer, cavities, you name it. The more sugar someone consumes, the more weight they gain, the more their chronic disease risk rises.

And the government is subsidizing high-sugar living. Not exactly promoting general welfare, are they?

Back in pre-industrial times, sugar was a luxury product. Today, it’s available to the masses—in mass quantities.

You’ll find added sugar in soups, sauces, cookies, crackers, salad dressings, and almost anything else that comes in a package. But the biggest source of refined sugar in our diet is the sugar-loaded drink.

It’s the fruit juices, the sodas, and the so-called “sports” drinks. The empty energy goes down easily. It doesn’t fill us up, but it does make us fat and diabetic.

If I could wave my hand and manifest one dietary change to improve the health of millions, I would eliminate liquid calories. This one move would dramatically decrease the rates of obesity, diabetes, and other diseases of modernity. The literature I’ve seen supports this belief.

This change won’t happen easily. We’re addicted to sugar. There are signs of hope, though. In recent years consumers in the US and Europe HAVE made a shift away from sugary beverages. This is great. But unfortunately, in a page taken from the Tobacco playbook, as sugar loses it’s sway in the developed world, soft drink manufacturers have shifted their focus to developing countries… but that’s all a topic for another day.

What Is Sugar Addiction?

Yes, people can become addicted to sugar—particularly those who consistently consume lots of packaged, processed foods. Eventually, a neurochemical dependence on high-glycemic (sugary) foods and drinks may develop.

This is a bit of a contentious topic within addiction circles. But at best, we’re splitting hairs on the subject. Folks can (and do) eat themselves to death, and they are not doing that with chicken and broccoli.

As the authors of one 2018 paper put it: “Sugar elicits addiction-like craving, and self-reported problem foods are rich in high-glycemic-index carbohydrates.”

The neurochemical basis of sugar addiction is interesting. It has to do with blood sugar, insulin, and dopamine.

When you consume a high-sugar diet, that sugar ends up in your blood. Rising blood glucose triggers the release of insulin, which then tells your brain to release a rewarding chemical called dopamine.

Dopamine is our “happy” molecule. Why do people get addicted to any substance? They “reward” our brains with a hit of dopamine—pleasure—and the desire for more pleasure keeps addicts coming back for more drugs.

Dopamine is also why we crave sugar. We want that hit of pleasure, and consuming sugar (which releases dopamine) achieves that goal.

Dopamine explains one part of sugar addiction, but it doesn’t explain everything. Here are some other reasons people can become dependent on sugar:

All this creates a barrier to quitting sugar that many people don’t want to confront. But knowing someone who has been through this, let me assure you: It’s worth addressing, it’s totally feasible to address, and there is no better time to confront it than today and each day moving forward.

The Symptoms of Sugar Withdrawal

If you go from a high-sugar diet to a low sugar diet, you may experience sugar withdrawal symptoms that include:

These symptoms are similar to withdrawal symptoms from other drugs. Caffeine withdrawal, for instance, typically entails several days of headaches before the brain adapts.

Practically, this means that the occasional sweet treat won’t lead to sugar addiction. It wouldn’t meaningfully modify the dopaminergic system. It’s the high daily sugar intakes (17 teaspoons per day for the average American) that sets the table for addiction and withdrawal symptoms.

Be aware, however, that the withdrawal symptoms aren’t always related to sugar.

What Else Causes Sugar Withdrawal Symptoms?

If you reduce your carb and sugar intake, you may experience a constellation of symptoms known as keto flu. Beyond sugar withdrawal, here are four other potential causes of these symptoms:

When you eat a ketogenic diet, you keep net carbs below 10% of daily calories. This signals the liver to burn fat for energy and produce ketones as backup brain fuel.

The brain normally runs entirely on glucose, but in ketosis, it runs partly on ketones too. This alternative fuel system helped our ancestors survive when carbs were scarce.

But when you first begin eating a keto diet, the brain doesn’t instantly transition from glucose to ketones. First glucose levels fall, then neurons cry out for energy, and finally, the brain adapts to using ketones.

This transition period—normally between 1-3 days—often entails headaches and brain fog, but these keto flu symptoms should be short-lived. To ease this transition, consider taking MCT oil (a highly ketogenic fat) to boost ketone levels while your brain keto-adapts.

First of all, quitting a high-sugar diet is a winning move for your gut. Reducing sugar intake can help treat bacterial or fungal overgrowths in the small intestine, plus lower sugar intakes appear to encourage the growth of anti-inflammatory bacteria.

But whenever you change your diet, your gut bacteria change too. And these changes often bring with them digestive symptoms.

Assuming you don’t have chronic gut issues, try upping your fiber intake to keep things regular. This will also keep your gut bacteria happy since fiber is their favorite food.

Low-carb diets have a diuretic effect. If the fluids lost through urine aren’t replaced, it can cause dehydration symptoms that mimic sugar withdrawal symptoms.

Yes, sodium deficiency is an underappreciated cause of keto flu. And I see it all the time: When people fix the deficiency, the symptoms vanish.

It makes sense when you understand the mechanics of low-carb dieting. A keto diet not only increases urinary sodium loss, but it also restricts salty processed foods. More salt is going out, less is coming in.

The equation needs to be balanced, and we balance it by putting more salt into the system. That’s why I formulated LMNT to have plenty of sodium and ZERO sugar. It’s a salty solution to a tricky low-carb problem.

If you want to change a bad habit, it’s useful to replace the undesirable behavior with a less harmful alternative. You might, for instance, squeeze a stress ball or take deep breaths instead of biting your nails to relieve tension.

The same logic applies to a bad sugar habit. If you want to break it, replace it.

Replace it with what? I recommend stevia, a zero-calorie sweetener derived from the leaves of the stevia rebaudiana plant. It’s plenty sweet, plus it has cool antioxidant and anti-diabetic properties. Stevia is one reason LMNT tastes delicious.

I also like a few other healthy sugar alternatives: monk fruit, erythritol, and allulose. All are non-caloric, non-glycemic, and non-insulinogenic.

Along with stevia, these natural sweeteners make quitting sugar easier. And anything that helps with that objective is okay in my book.

Lastly, I highly recommend reading my article, 5 ways to stop craving sugar (And why we crave it), as a followup to this one.