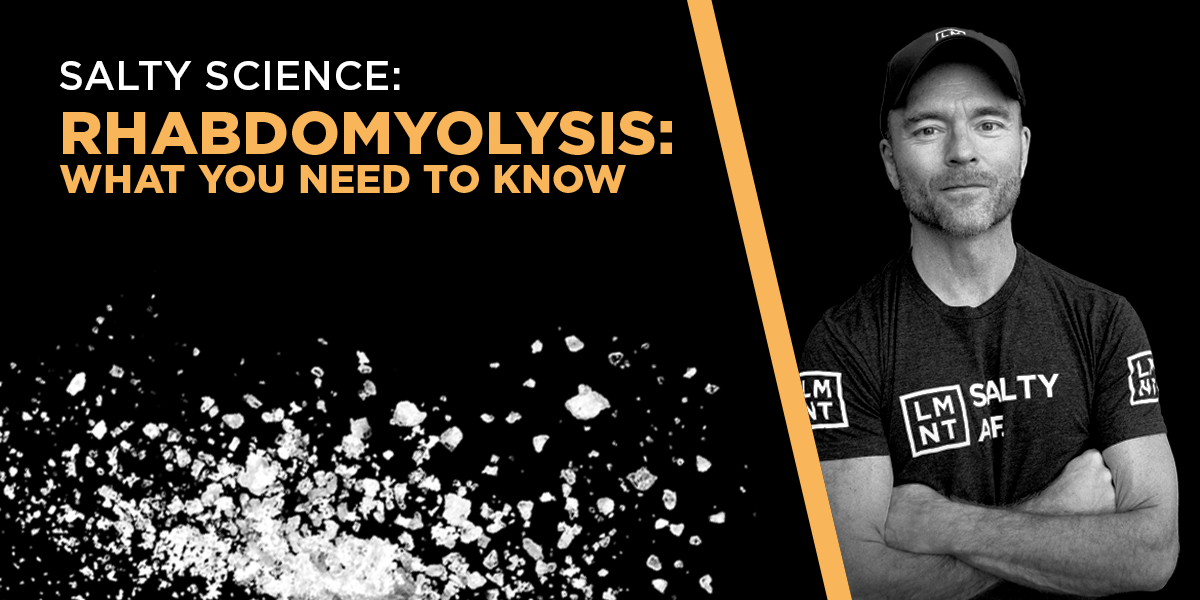 Rhabdomyolysis: What you need to know

From the desk of
Robb Wolf
Science → Rhabdomyolysis: What you need to know

Today I’ll be talking about a lesser-known but quite severe condition called rhabdomyolysis. When someone has rhabdomyolysis (or “rhabdo” for short), proteins and electrolytes leak out of muscles and into the blood. This can lead to acute kidney damage, electrolyte disturbances, and other serious complications.

You see higher rates of rhabdo in professions that entail heavy exertion, extreme heat exposure, or great risk of injury. Firefighters check all three boxes, so this group must take special care to prevent rhabdo.

Why is proper hydration essential for rhabdo? Because hydration both mitigates kidney injury (the main rhabdo complication), and helps prevent rhabdo from occurring in the first place.

We’ll dive into hydration for rhabdo prevention soon, but for now, understand that there’s a bit more to it than glugging water from the kitchen faucet. You also need to consume adequate sodium and avoid overwatering to prevent a dangerous electrolyte imbalance called exercise-associated hyponatremia.

But I’m getting ahead of myself. Keep reading to learn the symptoms, causes, prevention strategies, and treatments for rhabdomyolysis.

Rhabdomyolysis is a painful condition in which damaged muscles leak proteins, myoglobin, and electrolytes into the blood. Once in circulation, these leaked muscle contents can damage the kidneys and other organs.

Myoglobin also may enter the urine, turning it orange, red, or brown. This darkened urine (called myoglobinuria) is probably the best-known rhabdo symptom, but it’s not a reliable diagnostic indicator. Why? Because myoglobin can rapidly clear from the body and become undetectable.

The gold standard for diagnosing rhabdo is a biomarker called creatine kinase (CK). Creatine kinase (also known as creatine phosphokinase) is a product of muscle breakdown, and repeated elevations of CK will confirm a rhabdo diagnosis.

There are about 25,000 cases of rhabdomyolysis each year in the US. Most cases are considered mild or moderate, but 5 to 30% develop acute kidney injury. While this may seem like a small number of people, I must remind people that “mild” and “moderate” are relative terms. Rhabdo is a very severe condition. The mortality rate—even for those without acute kidney injury—is nearly 20%.

Risk factors for developing rhabdo include:

The three main rhabdo symptoms are muscle pain, weakness, and tea-colored urine. Yet many people can develop rhabdo (as measured by CK elevations) without ANY of these symptoms. Consider that:

Other possible rhabdomyolysis symptoms include:

Unfortunately, dehydration or an electrolyte imbalance can also cause these symptoms. That’s why it’s crucial to assess the whole picture (risk factors, biomarkers, and signs) before jumping to conclusions. This assessment includes determining the cause of the rhabdomyolysis, which (as you’ll see) is not as simple as one may think.

Millenia ago, Israelites would develop rhabdo after eating quail. The quail were fond of toxic hemlock herbs, and these toxins would enter the unsuspecting human to wreak havoc on muscles. Quail consumption is no longer a leading cause of rhabdo, but it illustrates an important point: nearly anything that accelerates muscle breakdown is a potential suspect. That’s not a small list!

The most common causes, however, involve:

Let me focus this lens by providing a few examples. For starters, elite endurance athletes are relatively common rhabdo victims. Dozens of miles pounding the pavement does a number on human musculature.

Then there’s heat stress. Heat increases fluid and electrolyte loss through sweat, as well as muscular strain. Firefighters, forge workers, farmers, athletes, and more must be mindful of this risk factor.

Keep in mind that dehydration and electrolyte imbalances also increase the risk of developing rhabdomyolysis. So any activity that depletes fluids and electrolytes will increase rhabdo risk. I wish that list were exhaustive, but other potential contributors include:

By now, you’re probably wondering how to prevent and treat rhabdo. Let’s cover that now.

The first step in treating rhabdo is to figure out the cause, then work to combat it. For example, if heat or exercise is to blame, the person should rest in a cool setting. Likewise, suspected medications or drugs should be discontinued whenever possible under the guidance of a medical professional.

After identifying and removing the cause, proper rhabdo treatment aims to prevent kidney damage while restoring fluids and electrolytes. The method of fluid restoration, however, depends on the severity of the condition. For mild cases, oral replacement of fluids and sodium should be sufficient. For moderate-to-severe cases, though, clinicians typically use IV rehydration.

Throughout the process, doctors will also monitor for kidney injury, heart dysrhythmia, seizures, and hyperkalemia (high serum potassium). These complications need to be diagnosed by a medical professional and may require immediate treatment.

Prevention is the key to beating rhabdo. If you don’t develop rhabdomyolysis, you don’t have to treat it. The first principle is to be mindful of rhabdo risk factors. Do you work a dangerous or strenuous job? Do you work in the heat? Do you exercise for hours on end?

You needn’t eliminate these risk factors to avoid rhabdo, but you do need to be careful. One factor you can easily control? Your hydration.

Remember, dehydration and electrolyte imbalances drive rhabdo. Prevent these issues, and you reduce your risk of developing rhabdomyolysis.

But there’s nuance here. Many believe that preventing dehydration is all about chugging plain water. That is not only incorrect, but it can be dangerous. Overwatering can lead to low serum sodium (hyponatremia). And hyponatremia can contribute to rhabdo, fatigue, muscle cramps, confusion, brain damage, and many other problems.

The key to proper hydration—for most people—is two-part:

In the next section, I’ll expand on this strategy by sharing a real-world protocol for firefighters, but let me conclude with a couple more rhabdo prevention tips.

First, body weight tracking can be a valuable strategy to get ahead of a potential case of rhabdomyolysis. If someone engages in strenuous activity and becomes 2% lighter than their average weight, they may very well be dehydrated.

Second and finally, education is vital. The more people know about rhabdo, the better we can prevent it. If you want to help spread the word, consider sharing this blog with at-risk friends, family, or colleagues.

Meet Matt Chan. He’s a firefighter in the North Area Fire Academy, and he’s devised an effective rhabdo prevention protocol for his crew.

According to Chan, heat exposure on the job can “exceed 500 degrees while wearing firefighting personal protective equipment (PPE) and self-contained breathing apparatuses (SCBAs).” He reports that they “had 4 cases of rhabdomyolysis in the 2020 Fall Academy, which cost North Metro Fire about $24,000 in workers’ compensation claims.” Chan’s solution?

First, he educated the academy about the dangers of rhabdomyolysis. Firefighters were given a rest if their body weight dropped 2% or more below its two-week average.

Then he individualized water intake recommendations based on Dr. Andy Galpin’s in-depth guide. Since firefighters can lose between 50-70 oz of sweat in a period of just 30-45 minutes, the academy drank electrolyte water every 15 minutes during physical activities. They calculated the ounces of water to drink by dividing their total body weight (lbs) by 30.

Outside of training, the academy adhered to a baseline daily water intake of ½ an ounce of water per pound of body weight. It’s important to note that water intake includes more than just drinking water. For example, someone on a healthful minimally processed diet can achieve up to 50% of their baseline water intake through a combination of food and other fluids (like coffee or tea). But while processed foods tend to contain greater water content, they also contain less sodium, the second half of proper hydration.

That’s why Chan educated the academy on the problem of overhydration and the importance of sodium. Drinking too much plain water, as I mentioned earlier, can cause dangerously low serum sodium levels. On days with a low level of activity, drinking to thirst—rather than on a set schedule—is sufficient (and encouraged to prevent hyponatremia).

The other way to prevent exercise-associated hyponatremia (and thereby reduce your risk of rhabdomyolysis) is to drink LMNT. Along with water, we must replace electrolytes lost through sweat. LMNT contains a science-backed ratio of electrolytes in each stick pack: 1000 mg sodium, 200 mg potassium, and 60 mg magnesium.

The result? Chan says: “By using this protocol [in 2021], incorporating electrolytes (free to all our recruits), and adhering to strict weight loss restrictions, we had zero heat-related injuries and minimal exercise-related injuries.”

I know it’s anecdotal evidence, but the published data also suggests that bumping up fluids and electrolytes can go a long way towards preventing rhabdomyolysis and the renal complications that may come with it.

The data also supports that early recognition is of key importance, so please share this blog with anyone that you believe could benefit from this information. It really could save lives.