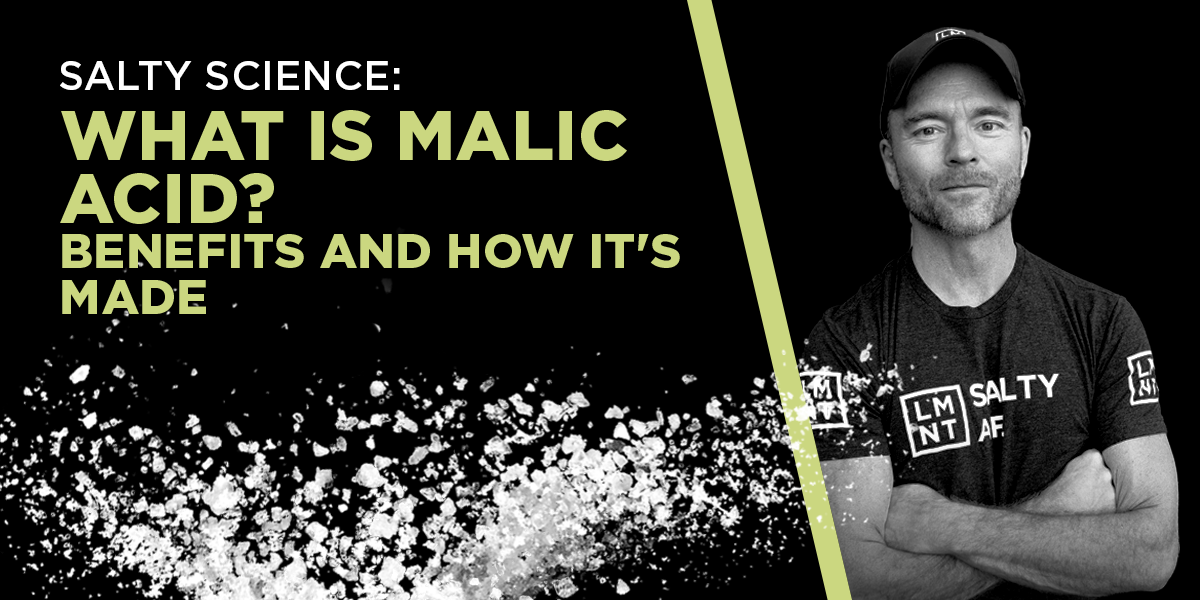 What is malic acid? Benefits and how it’s made

From the desk of
Robb Wolf
Science → What is malic acid? Benefits and how it’s made

Malic acid is an organic acid found in fruit. It’s used in foods to add flavor, and in supplements to enhance absorption.

In fact, we use magnesium malate (malate is a malic acid derivative) in LMNT. I prefer this form of magnesium over, say, magnesium oxide because it’s better absorbed and it tastes better.

Beyond helping minerals enter your body, malic acid has some cool potential health benefits. For instance, it’s is an intermediary in the citric acid cycle, the process by which your cells constantly produce energy (ATP). Unsurprisingly, there’s evidence that supplementing with malic acid improves energy production during exercise.

Consuming malic acid has other benefits too. I’ll cover those later, along with its overall safety profile. First, though, let’s explore the basics of malic acid: What it is, how it’s made, and where it’s used.

What Is Malic Acid?

Malate, in case you were wondering, is simply a derivative of malic acid. For our purposes, let’s consider them to be the same.

The citric acid cycle (also known as the TCA cycle and the Krebs Cycle) is responsible for producing cellular energy in the form of adenosine triphosphate (ATP). Malate is an important part of this cycle. Specifically, malate is a precursor to citrate, a key ingredient for producing ATP.

Fun fact: Malic comes from the Latin “malus,” which means apple. The more sour the apple, the higher the malic acid content.

Malic acid is also the main acid in many other fruits, including cherries, blueberries, blackberries, apricots, peaches, pears, plums, and grapes. Citrus fruits, on the other hand, contain higher levels of malic acid’s cousin: Citric acid.

History and Production of Malic Acid

Today, malic acid is widely used in the food and beverage industry as a preservative and natural flavoring agent. It’s also used to bind compounds in drugs and supplements, and in certain skincare products.

Malic acid is formed naturally in plants, but can’t be extracted in a cost effective way. That’s why people manufacture it. Here are the top methods:

While all of these methods produce essentially the same malic acid, the fermentation method is the most cost effective and eco-friendly option. Researchers are currently experimenting to optimize this newer form of malic acid production.

Malic acid also occurs naturally in wine. Nobody likes sour wine, though. So when wine is fermented, the malic acid is converted to the milder lactic acid. This process is called malolactic fermentation.

Manufactured malic acid, on the other hand, is most commonly found in:

Malic acid isn’t just a flavoring and preservative. It also offers health benefits. Here are the most promising:

When malic acid is attached to a mineral—be it potassium, magnesium, or calcium—it helps you absorb that mineral through the gut and into the bloodstream. In rats, magnesium malate was absorbed better than magnesium citrate, magnesium sulfate, and magnesium oxide.

As I mentioned earlier, magnesium malate is the form of magnesium in LMNT. It adds a pleasant tartness, plus it helps people absorb magnesium better. Win-win.

In one small study, eight healthy people were given 1,200 milligrams of malic acid each day for seven days. When the week was up, the patients had higher levels of citrate (which binds calcium) in their urine than they had at baseline. They also had lower levels of calcium and calcium oxalate, both kidney stone precursors. “We conclude,” write the authors, “that malic acid supplementation may be useful for conservative treatment of calcium renal stone disease.”

One randomized and controlled trial on 24 fibromyalgia patients suggests that malic acid can help. To be clear, four weeks of malic acid supplementation had no effect on pain and tenderness in this population. But the trial didn’t stop after four weeks.

Rather, it continued as an “open label” (non-blinded) intervention for several months. After this longer duration, the patients reported significant symptom relief. To be reasonable, this deserves more investigation—both as to why benefits were seen long after four weeks, and also to account for any potential placebo effect.

Recall that malate fuels the citric acid cycle. Think of this cycle, if you will, as your internal combustion engine. It takes non-usable fuel (food) and turns it into usable energy. This usable energy is called adenosine triphosphate, or ATP.

As a general rule, anything that boosts ATP production should also boost energy. One old study (on rats) found that malic acid salts improved exercise performance and recovery. Another study found that creatine malate supplementation improved performance and growth hormone levels in sprinters. But to be clear, creatine (not malate) could, and likely did, drive this effect.

Finally, 18 men complaining of fatigue showed improvements in energy and ATP production after taking citrulline malate supplements for 15 days. These benefits, according to the paper, may be due to “an enhanced malate supply activating ATP production.”

All of these are positive changes, but more research in humans is needed.

Malic acid is generally recognized as safe (GRAS) by the United States Food and Drug Administration (FDA). When a compound is given a GRAS designation, it means that experts have decided that it poses little to no health risk at normal levels of consumption.

Malic acid has also been awarded a “green circle” by the Environmental Protection Agency (EPA). This simply means that, based on experimental data, the EPA isn’t concerned with the safety profile of this chemical.

Another promising data point: The fibromyalgia study referenced earlier suggests that fairly high doses of malic acid can be taken for up to six months without adverse effects. These doses were orders of magnitude higher than what you’d find in foods and beverages.

Avoid getting malic acid in your eye (I know, tempting!), or placing the undiluted chemical directly on your skin. Beyond that, there’s little to worry about with malic acid.

I hope this article helped demystify malic acid for you. In summary, malic acid:

One last point. I wouldn’t use malic acid (as magnesium malate) in LMNT if I wasn’t 100% certain it was safe and healthy. After all, my whole family relies on LMNT for their electrolytes.

Okay, that’s it for today! Thanks for reading, and I hope you learned something useful. If you’d like, read up on stevia or citric acid next—I covered these flavor enhancers in detail.