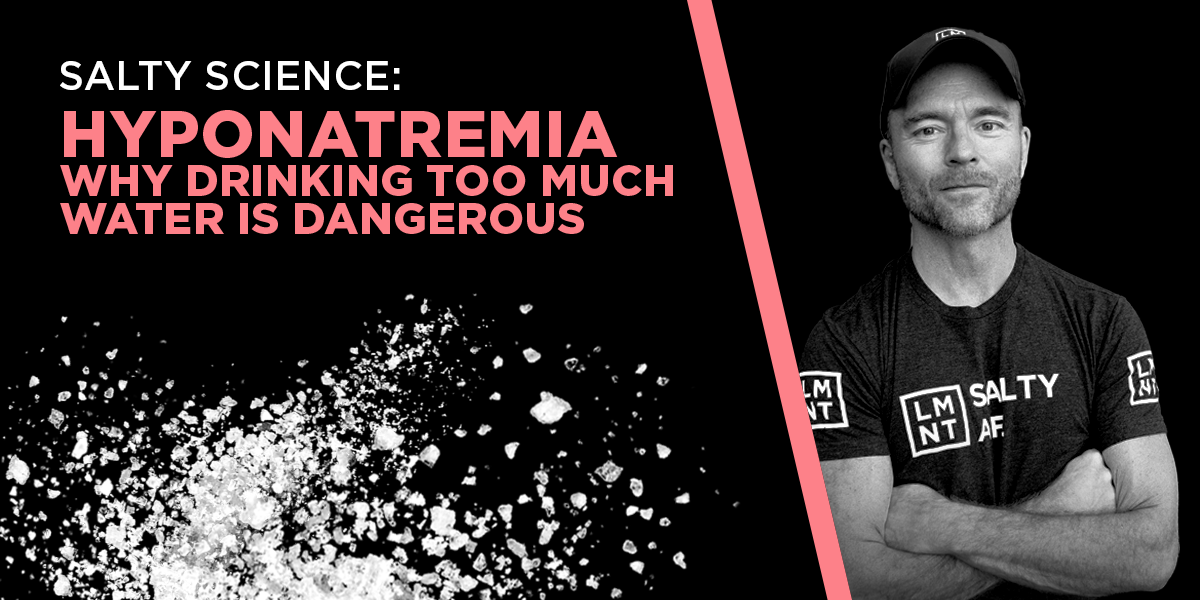 Hyponatremia: Why drinking too much water is dangerous

From the desk of
Robb Wolf
Science → Hyponatremia: Why drinking too much water is dangerous

Today I want to talk about the most damaging hydration myth: the myth that drinking more water is always beneficial for hydration.

It’s not. Drinking too much water leads to a dangerous low-sodium state called hyponatremia. And by dangerous, I’m talking about brain swelling, brain damage, seizures, and death in severe cases.

It happens to endurance athletes more than you might think. Following commonly-accepted guidelines, these athletes drink aggressively to prevent water loss. This allegedly improves performance.

Allegedly is the key word here. Athletes drinking to thirst routinely lose significant body water and continue to perform just fine. Although that may seem counterintuitive, when we look at the larger picture of hydration (water+electrolytes) things fall into place.

It makes sense, from an evolutionary perspective. We evolved on the hot plains of Africa. The hunts were long and both water and sodium were scarce. When we sweat, we lose water and sodium in a fairly specific ratio.

Yes, at some point water loss can negatively affect performance, but humans are arguably some of the most well-adapted organisms for high-motor work in hot environments over a long period of time.

Interestingly, some elite endurance athletes even use “tactical dehydration” to eke out a few more performance points. The key here is that the tactical loss does not significantly affect the ratio of sodium to potassium.

On the other hand, adding water without any sodium can be dangerous. Yet, for some reason, in both medical and coaching circles you rarely hear this. These “drink more water” folks are inadvertently flirting, sometimes even diving headfirst, into a condition called hyponatremia.

Hyponatremia is defined by abnormally low blood sodium levels. The symptoms of hyponatremia include:

In severe cases, the patient may experience seizures, brain damage, and death. Neurological symptoms, in fact, are a hallmark of hyponatremia. Exercise scientist Tim Noakes has seen these symptoms manifest in many hyponatremic runners he’s treated:

“They don’t want to speak to anyone,” Noakes is quoted as saying. “They don’t want to look at the lights. When you speak to them, they are extremely dull and slow. You think, Gosh, these are very stupid people. But it is because their brains have swollen and are not functioning normally.”

Their brains are swollen? Yes, when sodium levels drop rapidly, the brain swells with water—a condition called cerebral edema. If this persists for long enough, the person may suffer a stroke.

The most common causes of hyponatremia include:

We’ll explore the last reason in detail, because it’s the most preventable. And it typically occurs in the context of exercise.

Drinking too much water during exercise causes a type of hyponatremia called exercise-associated hyponatremia (EAH). Why? Because the excess water dilutes the athletes blood sodium levels, and the athlete loses the ability to expel the additional fluids.

According to one estimate, 13-15% percent of elite endurance athletes develop EAH. Other estimates peg the incidence much higher, depending on the sport. More than a few of these athletes have perished from the consequences of low serum sodium.

At the core of this problem is the belief that athletes must replenish all the fluids lost during exercise. That’s why you see water stations every couple miles on a marathon course.

This belief is promulgated by the American College of Sports Medicine. The ACSM advises athletes to drink as much as needed to prevent losing more than 2% of their body weight in water. This guideline has been in place since 2007, but the use of water as a “performance enhancer” appears to originate in the US military.

Back in the 1980s, the military began encouraging soldiers to consume 1.8 liters of water per hour. This was supposed to prevent overheating during training drills.

It didn’t. Instead, there was an uptick of hyponatremia among service members. The military subsequently revised the guidelines, but not enough to prevent further cases.

In one tragic case from the 1990s, an army trainee was believed to be dehydrated, but really had hyponatremia. Overwatering him eventually proved fatal.

Other Causes of Exercise-Associated Hyponatremia

Drinking too much sodium-free water is the primary cause of exercise-associated hyponatremia, but it’s not the only cause. Here are some others:

The brain secretes antidiuretic hormone (ADH), also known as vasopressin, to help us retain fluids. Under normal conditions, most people would be okay if they drank too much sodium-free water. The brain would stop secreting ADH, and they’d pee out the excess H2O.

But for many athletes, the brain continues secreting ADH during exercise. As a result, they over-retain fluids, leading to low serum sodium.

Why is this fluid-regulating system broken in athletes? Researchers aren’t sure, but one theory is that the inflammation generated during exercise (in particular, an inflammatory particle called IL-6) stimulates the release of ADH. More ADH, higher risk of hyponatremia.

From an evolutionary perspective, this may also be a way for the body to begin hoarding water early. There were no hydration stations in the Paleolithic!

Active people exercising in warm climates lose up to 7 grams of sodium per day through sweat. Unfortunately, their fluid-replacement strategy often lacks sodium. Sodium goes out, but it doesn’t come back in.

All that sweating also depletes blood volume, which in turn stimulates ADH release. When ADH levels rise, the body doesn’t excrete additional fluids through urine, but these retained fluids do not have the ratio of sodium to potassium needed for normal physiological function.

The body stores significant chunks of sodium in bone, skin, and cartilage. This sodium serves as a buffer to maintain normal blood sodium levels. Researchers hypothesize that these stores become inaccessible during hard exercise.

During exercise, your body breaks apart and releases glycogen (stored glucose) to provide energy. The longer and harder the effort, the more glucose is demanded. Since glycogen is mostly water weight, the water sloughed off by glycogen metabolism likely contributes to over-hydration.

After exercise, blood flow increases to the GI tract. This may speed the rate of fluid absorption, raising hyponatremia risk in the athlete with a full belly of sodium-free water.

Dehydration is defined as losing more water than you’re taking in. It’s consequence—hypohydration—is the problem people worry about.

Most hydration guidelines are designed to prevent hypohydration. The logic is that proactively replacing fluids will prevent performance declines and overheating.

But this logic isn’t grounded in science. First of all, there’s no good data supporting the claim that dehydration makes one overheat. If anything, dehydrated athletes stop exercising at lower core body temperatures, as was shown in this 1985 study. If an athlete is overheating, it probably just means they’re pushing too hard.

But doesn’t dehydration impair your performance?

That’s not clear. For example, a 2019 systematic review found that dehydration didn’t significantly impact athletic performance in a population of 82 athletes. Athletes drinking to thirst performed about the same as the set-schedule group, despite losing about double the body water.

Maybe humans are supposed to lose body water during exercise. That’s what happens when we drink to thirst, and it doesn’t seem to impact performance in healthy people. That’s how our ancestors rolled. In the modern world, where one may need to train at levels far above that of our ancestors, a smart rehydration strategy makes sense, but water alone does not equate to hydration.

Plus, you can comb the medical literature and not find a single sports-related death from dehydration or hypohydration. You needn’t look far, however, to find hyponatremia-related fatalities. Let me say that again in plain english: over-consumption of water has proven to be fatal; sports-related under-consumption has never caused the death of anyone.

We need to get our priorities straight. We should be focusing on preventing hyponatremia, not hypohydration. And assuming other drivers of hyponatremia aren’t present, preventing exercise-associated hyponatremia isn’t rocket science.

How To Prevent Exercise-Associated Hyponatremia

Preventing hyponatremia is simple. There are only two principles to follow:

Thirst is a brilliant system honed over millions of years of evolution. It tells you how much fluid you need to feel and perform your best.

Many athletes drink beyond the dictates of thirst. But drinking on a set schedule doesn’t lend a performance edge. It just increases the risk of hyponatremia.

When you sweat, you lose water and sodium. Both need to be replaced.

You already learned what happens when water (and water only) is replaced. Hyponatremia. Fortunately, things turn out better when sodium is included.

In a 2014 randomized controlled trial, an oral saline solution effectively reversed exercise-associated hyponatremia in distance athletes after a grueling 161 kilometer race. In other words, salt water did the trick!

You need plenty of sodium—upwards of 5 grams per day—to support an active, sweaty lifestyle. That’s about 2.5 teaspoons of salt. When I realized I was low on this crucial electrolyte, I started whipping up high-sodium homebrews and felt the benefits immediately: headaches and muscle cramps subsided, and my energy increased.

But making homebrews is labor-intensive, not to mention messy. That’s partly why I created my salty electrolyte drink mix, LMNT. It’s a simple, grab-and-go way to replenish electrolytes—and it tastes great too.