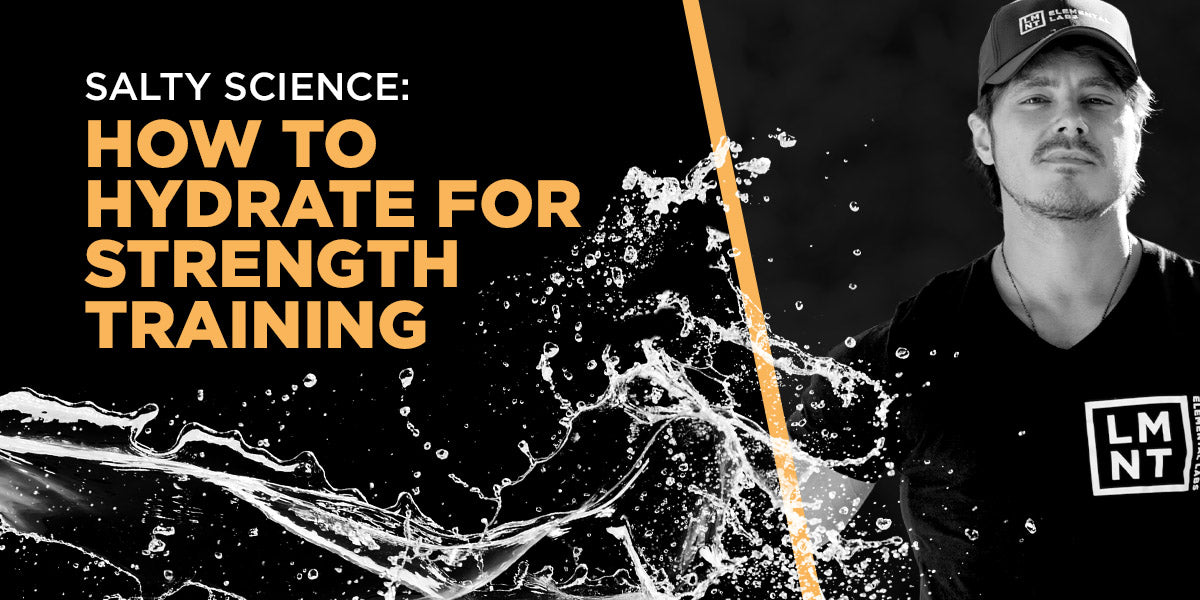 Hydration for strength training: What you need to know

From the desk of
Luis Villaseñor
Science → Hydration for strength training: What you need to know

What’s the best way to stay hydrated for strength training?

I’ve gotten this question a lot in my coaching career. People want to know how much fluids and electrolytes they need for resistance exercise, especially in the context of a low-carb diet.

To hydrate for these exercises, the first principle is to prevent deficiency. Being low on water or electrolytes can impair exercise performance, cause muscle cramps, and make you feel like a piece of rotten, waterlogged driftwood.

Sweat volume is a key variable driving these deficiencies and is critical for strength training, even though you sweat less than endurance exercise. This, along with factors like diet, should be considered when determining your hydration strategy.

Beyond sweating, the often-neglected electrolyte known as magnesium can help with muscle performance. This is especially true for older folks, who tend to be deficient in this crucial mineral.

But I’m getting ahead of myself. Let’s back up for a minute and review the goal of hydration. Then we can see how it applies to strength training.

The Goal of Hydration

The goal of hydration is to achieve a state called euhydration. When you’re in a state of euhydration, your body water is balanced within an optimal range.

“Wait, optimal? Shouldn’t I just drink as much as I can? Then there’s no way I can be dehydrated.” Actually, evidence shows that overwatering can be even more dangerous than dehydration. Drinking too much water can throw off your blood sodium balance, leading to a nasty condition called hyponatremia.

So, there exists a proper amount of water—not too much, not too little—that keeps your body in a state of healthy hydration. Euhydration = optimal hydration. That’s where you want to be.

Keeping body water balanced is essential for good health. Water is the lubricant that keeps everything moving and floating. It keeps your blood flowing through your veins, your brain floating in your skull, your organelles suspended in your cells, your waste moving through your bowels, and so on.

To achieve optimal body water, drinking water is only half the equation. The other half is electrolytes.

The electrolytes sodium and potassium are your fluid balance linchpins. The concentrations of these electrolytes also signal a flurry of fluid-balancing hormones like aldosterone, renin, and angiotensin.

Consider the sodium – aldosterone connection. If you’re deficient in sodium—from drinking too much water, perhaps—your adrenal cortex dumps a bunch of aldosterone into your system. Aldosterone helps you hold onto sodium, yes, but it also raises blood pressure and increases the excretion of potassium through urine.

Now you’re low on sodium AND potassium. This is not good for longevity, performance, or health in general.

This is why it’s super important to take electrolytes (especially sodium) along with your water. With that in mind, let’s talk about how much water you need during strength training.

Hypohydration has been shown, in several studies, to impair endurance exercise performance. You can’t cool yourself properly and performance declines.

But does hypohydration affect strength and power too? This isn’t so clear-cut.

There were no significant differences in vertical jump height, peak lower-body power (jump squat), or peak lower-body force (back squat) between the hydration states. The one difference? When euhydrated, the athletes could perform more total work during a six-set back squat protocol.

Another study looked at rugby players hydrating for either aerobic or strength training. And they found something interesting.

The researchers detected no cases of hyponatremia (low serum sodium), a dangerous and common consequence of drinking too much water. Nonetheless, the result suggests that drinking too much (not too little) water is the more common problem for strength training.

Sodium and Potassium During Strength Training

When you strength train—squats, deadlifts, bench press, etc.—the blood concentrations of these electrolytes shift. Specifically, sodium goes up and potassium goes down.

The hormone aldosterone has a hand in this. It’s secreted during strength workouts, causes blood volume to go up, sodium to be retained, and potassium levels to drop. Thirty to sixty minutes after exercise, things go back to normal.

But getting back to normal assumes there are no deficiencies in either electrolyte.

If you’re deficient in sodium, you may experience:

And if you’re low on potassium, similar symptoms (especially muscle cramps) can result, along with an increased risk of high blood pressure.

That’s why it’s crucial to get enough sodium and potassium through diet and supplementation. We’ll cover those details later, after we hit on magnesium.

Most everyone agrees that magnesium is crucial for muscle function and exercise performance. Magnesium is an essential ingredient in the production of adenosine triphosphate (ATP), the energy molecule that powers your cells.

Yep, your cells don’t use carbs, protein, and fat for energy—not directly. They use ATP. Magnesium helps convert stored energy (from food) into this usable energy.

But does magnesium supplementation increase strength and power? That’s where things get controversial.

In one meta-analysis on 14 randomized clinical trials, researchers found that “evidence does not support a beneficial effect of Mg supplementation on muscle fitness in most athletes and physically active individuals who have a relatively high Mg status.”

These researchers, however, go on to admit that taking magnesium does appear to improve strength in magnesium-deficient folks. Namely: the elderly and alcoholics.

But old people and alcoholics aren’t the only magnesium-deficient populations. Up to 30% of the population may be subclinically deficient—a deficiency that’s difficult to assess due to the inaccuracy of blood testing.

I suspect that increases in strength from magnesium supplements may stem from corrections in these deficiencies. For instance: In one study, 18 to 30 year olds supplementing magnesium had greater strength gains in the quadricep region compared to controls.

As a general rule, strength training has lower hydration requirements than endurance training. Nonetheless, if you’re furiously deadlifting in a hot room wearing a sweat suit, you’ll want to have lots of electrolyte water on hand.

Diet is also worth mentioning here. If you’re on a low-carb or keto diet, or you practice fasting, you probably need more fluids and electrolytes.

Low-carb diets are diuretic, and cause increased excretion of water, sodium, and potassium. A similar phenomena occurs in a fasted state, called “the natriuresis of fasting”. These electrolytes need to be replaced to avoid keto flu symptoms like fatigue, headaches, cramps, and insomnia.

There’s also the fact that restricting carbs restricts many electrolyte-rich foods. Potatoes, bananas, oranges, raisins—all of them are off the menu. Similarly, most sodium in the US is consumed from packaged and processed foods. If you eat a diet predominantly of whole foods you probably aren’t consuming adequate sodium.

As a baseline daily intake we recommend 4–6 grams sodium, 3.5–5 grams potassium, and 400–600 mg magnesium for most folks. Get what you can first through diet, and then supplement any shortfalls.

Hydrating for resistance training isn’t super complicated. The winning strategy can be summed up in one sentence:

Drink water to thirst and replace your electrolytes.

When you drink to thirst, it’s unlikely you’ll drink too much or too little water. Thirst is a tightly calibrated system, and it’s tuned to help you stay in a state of euhydration.

Adding electrolytes (especially sodium) to your fluids helps replace what’s lost through sweat so you can power through your workout and recover faster.

Mix up an electrolyte homebrew in your kitchen, or try LMNT—our tasty electrolyte drink mix with a science-backed ratio of electrolytes and no sugar or other questionable ingredients.

And that’s it. You’re ready to stay hydrated during your strength session. Stay strong and stay salty, my friend.