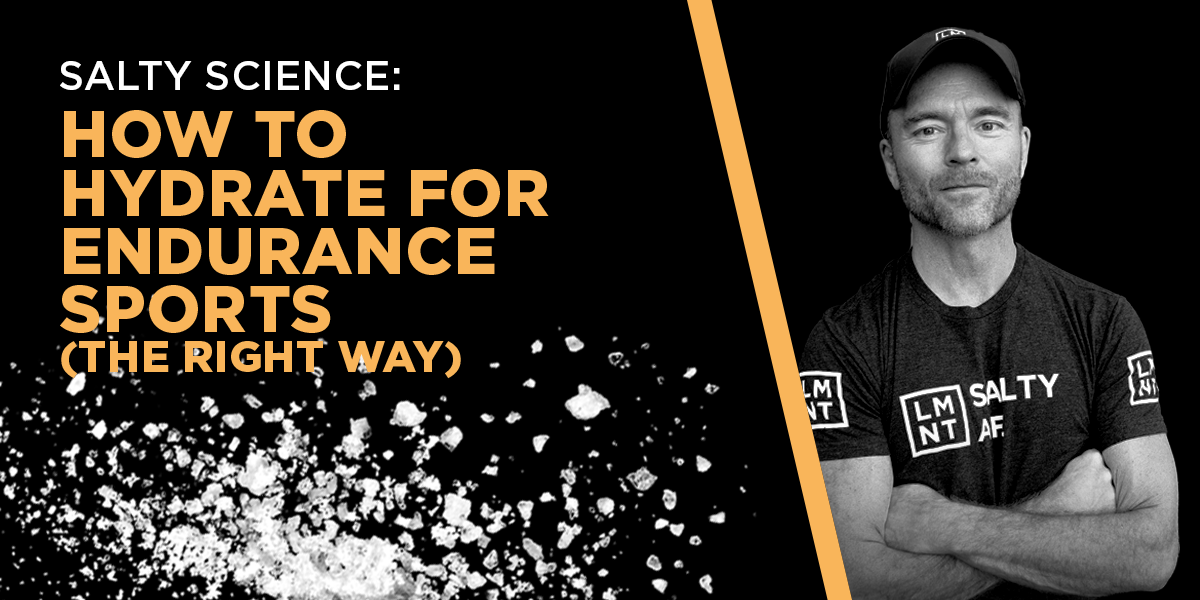 How to hydrate for endurance sports (the right way)

Endurance sports place heavy demands on your body. When you exercise for hours on end, your hydration needs (including electrolyte needs) increase dramatically.

If you don’t account for this, not only will your performance suffer, but the hours and days following the activity will be rough, too. This is a typical complaint I hear from runners, cyclists, and swimmers alike.

Here’s what happens. Somewhere along that long-awaited marathon, triathlon, or Iron Man, they bonk. And after the race, they stay bonked for a long time.

If you look at the typical marathon course, you’ll find watering stations about every 2 miles. Water isn’t the problem; rather, it’s that the stations usually dispense sodium-free water. And water that doesn’t contain vital electrolytes—nutrients like sodium—doesn’t recharge your battery after losing a ton of salty sweat. Though it may seem counter-intuitive, adding water (without electrolytes) may make this situation worse.

It’s a common myth: folks think that as long as they’re drinking water, they’ll be hydrated. In actuality, that myth can be quite harmful—and even more-so than dehydration. Drinking water without replacing lost sodium dilutes blood sodium levels, and can cause a dangerous condition called hyponatremia.

The headaches, cramps, and confusion that come with exercise-associated hyponatremia plague a large portion of athletes. We’re talking anywhere from 10-70%, depending on the activity.

To make matters worse, exercise-associated hyponatremia is often confused with dehydration. This results in a dangerous and ineffective prescription: Drink more water.

Yes. Endurance athletes need to drink more water than most folks to replace the fluids lost through their sweat. But for the sake of their health, that water NEEDS to contain sodium. There are two factors at play here: 1) water, to provide the fluid volume to minimize stress on the cardiorespiratory system, improve evaporative cooling, etc., and 2) electrolytes, which are literally the “spark” that allow not just activity, but life.

First, let’s cover the basics of hydration. This will set the stage for later, when we get into hydrating for endurance sports.

What Is Optimal Hydration?

According to a review paper from the journal Nutrients, euhydration is “the state of preserving body water within its optimal homeostatic range.”

Notice that the definition doesn’t say anything about drinking water. Hydration is a state of fluid balance in your body, not the act of pounding fluids.

A state of euhydration is essential for good health. About 50% to 70% of your body weight is water, and maintaining this balance of fluids keeps blood flowing through your veins, your brain sitting in cerebrospinal fluid, your body temperature constant, and much, much more.

Normally, your body does a nice job maintaining euhydration. If there’s too much water on board, you’ll pee it out. And if there isn’t enough, you’ll release hormones (like antidiuretic hormone) to retain it.

Sodium is a positively charged mineral (called a cation) responsible for regulating extracellular fluid balance, or the water outside of your cells. When sodium levels aren’t optimal, your fluid levels aren’t optimally balanced, either. You’re sure to feel the effects if you don’t replace this nutrient, be it through headaches, reduced performance, or otherwise.

I want to cover each separately, because both states can sap your energy, performance, and recovery.

Long-distance and high-intensity activities like running, cycling, and obstacle racing provoke tremendous sweat loss. If you’re slogging along in warm weather, you can lose anywhere from 4 to 10 liters of water!

As a result, total body water decreases significantly. If more than 2% of your total body water is depleted, you’ve likely entered the state of hypohydration. I say likely because some studies suggest elite runners may actually perform better with body-water levels that most medical professionals would consider “dehydrated.”

This “tactical” reduction in body water arguably improves the power/weight ratio for runners, allowing them to run further, faster. While this is certainly an interesting thought, a few things are still not clear.

For starters, how do these folks manage to use this technique without disrupting electrolyte balance? And is part of the reason that these athletes manage to compete at such a high level due to their ability to function at a modestly dehydrated state?

In short, I’m not exactly sure how solid of conclusions we can make from this information. At a minimum, we can argue the case that truly elite athletes are not necessarily avoiding dehydration at all costs. And, although speculative, I think it’s worth noting—not all of us are elite athletes, so we may not have the same leeway when it comes to hydration strategies.

Dehydration, in case you were wondering, is the process of losing those fluids. Hypohydration is the result.

When someone is hypohydrated, exercise tolerance decreases and performance suffers. This is well-documented, but the mechanisms behind why this happens are up for debate.

One potential reason? When you’re low on body water, your internal cooling mechanisms become less effective. Skin temperature increases, and your ability to sweat (and, therefore, cool down) decreases.

This is also why, at any given temperature, higher humidity makes exercise harder and more physically stressful. Even whilst well hydrated, high humidity reduces the effectiveness of evaporative cooling via sweat. To reinforce that last point, in one study, researchers found that when cyclists were hypohydrated, performance declined in lock step with rising skin temperature.

A 2003 consensus statement from the International Olympic Committee reads:

“Sufficient fluid should be consumed during exercise to limit dehydration to less than about 2% of body mass… Sodium should be included when sweat losses are high, especially if exercise lasts more than about 2 h.”

And if sodium isn’t included, you’ve got bigger problems to worry about than low body water.

To prevent dehydration, many athletes guzzle sodium-free water beyond what thirst prompts. Since sodium is necessary for water retention (and electrochemical gradients), this isn’t a very well-thought out strategy.

Hyperhydration, also known as overwatering or water intoxication, is a potentially fatal state of electrolyte disturbance brought on by excessive water consumption.

You see this a lot in marathons. Runners drink electrolyte-free water on a set schedule, dilute blood sodium levels, then suffer the consequences of exercise-associated hyponatremia (low serum sodium).

In other words, hyperhydration = hyponatremia.

Hyponatremia is serious stuff. In the beginning, it causes headaches, cramps, confusion, and fatigue. As sodium levels continue to fall, seizures, brain damage, and even death can result.

More than a few elite athletes have perished from hyponatremia. What about dehydration? Not one sports-related death, in all the medical literature.

Fortunately, exercise-associated hyponatremia is fairly easy to prevent and reverse.

Getting Enough Sodium for Exercise

If you’ve read this far, you know how important sodium is for hydration. It keeps body water at the Goldi-locks, “just right”, level. And when sodium levels fall to hyponatremic levels, the consequences are no joke.

Sodium needs go up in proportion to sweat loss. And the volume of sweat loss depends on the activity, ambient temperature, humidity, and a few other factors.

According to a paper from the Journal of Sports Sciences, vigorous exercise in warm climates can provoke sodium losses of 3.5 to 7 grams per day. For reference, that’s about 1.5 to 3 teaspoons of salt—in addition to baseline needs.

This sodium needs to be replaced. But how?

In one randomized controlled trial, researchers rounded up 26 hyponatremic runners after a 161 km race, and gave them one of two interventions: IV sodium or a salty solution to drink. Both interventions restored their sodium levels.

The takeaway? Drink electrolyte water, but don’t wait until after the race to think about sodium. Consuming sodium before and during exercise can help maintain euhydration, and prevent problems from developing later on.

What Affects Hydration Needs During Exercise?

While we’re mainly talking about long distance runs, triathlons and the like—pause for a moment and consider how a sport like Brazilian Jiu Jitsu (wearing a gi and exerting at high output) could dramatically increase electrolyte needs.

We’ll end on some actionable advice to take with you.

Thirst is a tightly regulated system. You don’t usually need to go beyond it. And when you do drink, remember to…

You lose both sodium and water through sweat. If you only replace the water, your sodium levels will fall. Then you’ll feel and perform like garbage.

Remember, athletes can lose up to 7 grams of sodium per day while exercising in warm climates. You may need more than one stick on the sweatiest of days!

You lose very little potassium and magnesium through sweat. That’s why I didn’t focus on them today.

Nonetheless, if your diet isn’t rich in these electrolytes, your energy and exercise performance will notice. I recommend folks supplement 1000 mg potassium and 200 mg magnesium per day, in addition to dietary sources. Just to make that clear, “supplement” means just that, add to what we should be getting from a solid nutrition approach.

#4: Hydrate before, during, and after exercise

Don’t wait until the race is over to worry about hydration. Sip electrolyte water before and during exercise too. Your body will thank you.

Oh, and one last thing—have fun out there! That’s the whole point, isn’t it?