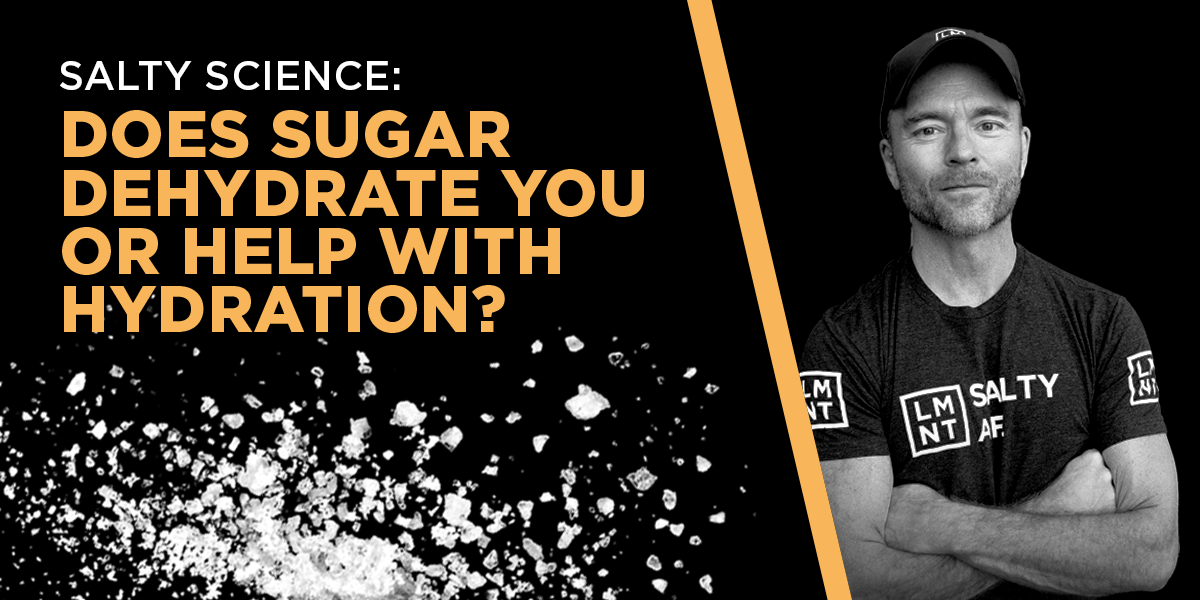 Does sugar dehydrate you or help with hydration?

From the desk of
Robb Wolf
Science → Does sugar dehydrate you or help with hydration?

People often ask me if sugar helps with hydration. Occasionally, they’ll also ask if sugar dehydrates you. Today I’ll be addressing both questions. That way, I can send folks a link to this article rather than indulging myself in lengthy email replies during family time. My wife and kids will appreciate that.

I’m always learning new things about sugar and hydration. For instance, I recently learned that a high-fructose solution induced dehydration and kidney damage in rats. I know, poor rats. But poor people too, because millions of people are damaging their bodies with non-hydrating soda and so-called “fruit juices.”

But the problem isn’t limited to sugary sodas. There are plenty of rehydration solutions—including the hydration strategy sanctioned by the World Health Organization—that intentionally include sugar (as glucose) in the formula. The claim is that sugar aids with hydration.

I’m no fan of sugar, but I must admit the claim is not entirely crazy. Glucose helps shuttle salt and water through your gut and into your bloodstream, making it useful in situations of extreme dehydration, such as with cholera.

But do you need glucose to hydrate? That’s where I depart from the airy marketing claims of several brands that shall remain nameless.

No, you don’t need sugar to stay hydrated. What do you need? Salt and water. Read on and you’ll understand why.

When I talk about staying hydrated, I’m talking about achieving a state called euhydration. Euhydration is a state of optimal fluid balance in bodily tissues. It’s the “Goldilocks” level of hydration we’re shooting for.

Proper fluid balance keeps your body tuned like a professional instrument. It keeps your blood flowing, your skin moist, and your brain floating happily in your skull. It also enables cellular communication.

Why do you think hydration disruptions are synonymous with energy disruptions? You can’t be on top of your game if your cells can’t efficiently transmit messages.

But here’s where I must make an important distinction: healthy hydration is NOT synonymous with pounding water. If you drink too much water, you run the risk of developing exercise-associated hyponatremia, a dangerous state of low serum sodium that’s killed more than a few endurance athletes.

And if you don’t drink enough water—or lose too much water through sweat, urine, or feces—you may become dehydrated. In other words, you’ll be losing significantly more water than you’re taking in.

Dehydration is actually pretty rare among healthy adults, contrary to popular belief. When our body water drops, our brain starts trumpeting the thirst signal. Then we drink something. Problem solved.

Does Sugar Dehydrate You?

When we’re dehydrated, thirst urges us to drink something. Then thirst subsides and we can bask in healthy hydration.

Even if they don’t quench thirst, sugary drinks are still hydrating, right? Perhaps not. Animal research in both rats and flies has shown the opposite: sugary beverages are dehydrating.

After a hefty dose of sugary liquid, rats became seriously dehydrated—not to mention riddled with kidney disease. The rats fed stevia water, however, had their health and hydration restored. (As an aside, this is one of many reasons why we chose stevia to sweeten LMNT.)

Fructose is likely the biggest offender. Excess fructose consumption not only damages the kidneys but also causes fat accumulation in the liver.

More generally, digesting and metabolizing sugar also requires water. So you have a few different lines of evidence suggesting that, yes, too much sugar will dehydrate you.

Now let’s review the other side of the coin: sugar for rehydration.

By some estimates, ORT has saved millions of lives. It’s been especially helpful in fighting dehydration borne of cholera, a bacterial illness that causes severe diarrhea.

ORT doesn’t include glucose by accident. This simple sugar helps chauffeur water and sodium through the gut and into circulation. In other words, glucose enhances fluid and electrolyte absorption.

Dr. Robert Crane first discovered this phenomenon in 1960. He called it his “cotransport hypothesis.”

Today we know this system is largely mediated by a protein called SGLT-1 (sodium glucose cotransporter 1) in the small intestine. Essentially, SGLT-1 boosts the absorption of sugar, fluids, and sodium when glucose and salt are present. Other transporters (like SGLT-2) also contribute, but SGLT-1 is the primary sodium-glucose transporter in the gut.

Many rehydration products leverage SGLT-1 by including glucose in the formula. The claim is that you can’t effectively hydrate without sugar. Is it true?

Allow me to be blunt. Glucose may help you absorb sodium and fluids, but you don’t need it to stay hydrated.

First of all, glucose isn’t the only sodium cotransporter in town. The following molecules also help bring sodium through the gut and into the blood:

Second, sodium and fluids don’t require cotransporters to be absorbed. They can diffuse passively through the gut.

It’s good news for those of you cutting back on sugar. If you’re on a keto diet, 10 to 20 grams of glucose can cause a temporary blood sugar spike, bump up insulin levels, and suppress ketogenesis.

Me? I occasionally use 10-20 grams of glucose to fuel jiu-jitsu sessions. (The glucose gives me a boost of energy for intense, glycolytic movements.) But for everyday hydration, I’m just a water plus electrolytes guy.

The Importance of Salt for Hydration

To sum it all up, we don’t need sugar to stay hydrated. We do, however, need salt. Salt provides sodium, and sodium is essential to human physiology. It’s the stuff of life.

Plus, most people don’t consume enough salt. Drinking bottled water is a national pastime, but salting our dinner is a national taboo: Drop the salt shaker Herb, sodium is terrible for your heart!

Ironically, avoiding salt (not consuming it) is what’s bad for your heart. Low-sodium diets aren’t just correlated with higher blood pressures but also with higher rates of heart attack, stroke, and high blood pressure. We need more salt, not less.

Still don’t believe me? I get it! Salt has been demonized for most of my time on Earth too. Take a look at the published evidence I’ve cited in this article if you’re still skeptical, and leave me a comment down below. I’d love to hear from you.

How to Stay Hydrated

What about glucose-infused rehydration serums? There’s something there—and feel free to experiment with glucose for heavy exertions or post-illness hydration—but don’t be fooled by claims that sugar is absolutely necessary.

For all the reasons above, we formulated LMNT with electrolytes, stevia, and natural flavors—and ZERO artificial ingredients, preservatives, or sugar. Not everyone wants that hit of glucose, nor do you need that hit of glucose for taste or proper hydration.