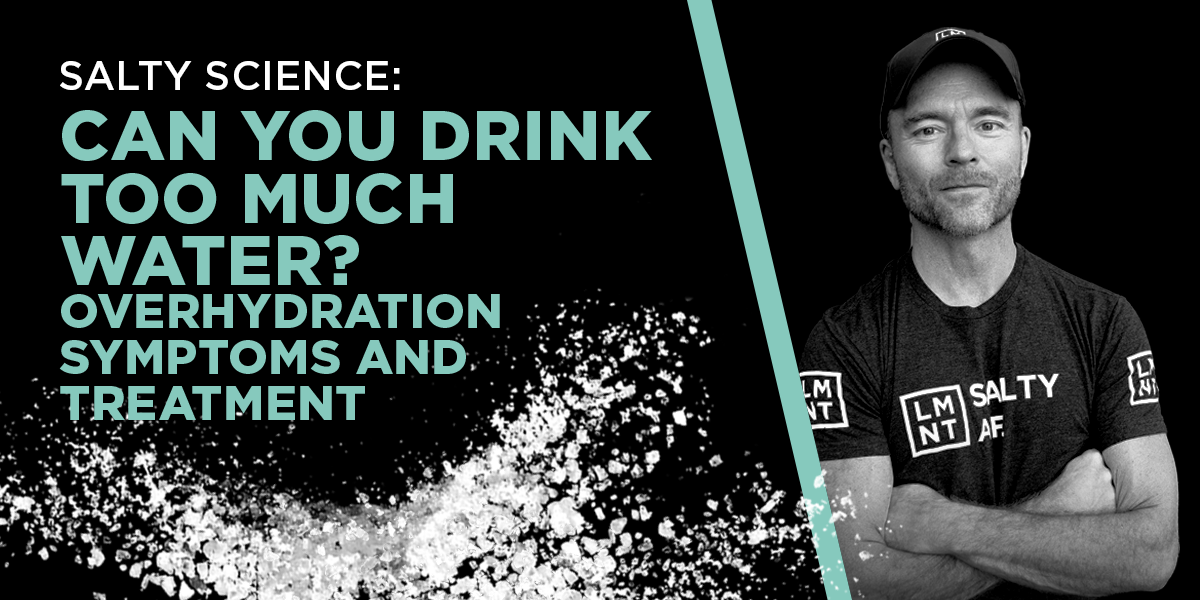 Can you drink too much water? Overhydration symptoms and treatment

From the desk of
Robb Wolf
Science → Can you drink too much water? Overhydration symptoms and treatment

The main danger of overhydration is that it dilutes blood sodium levels. Many athletes have perished unnecessarily from this preventable condition called exercise-associated hyponatremia. Many more have suffered.

I know that’s a morbid way to start an article, but I have to talk about this stuff. I’m one of the few people making noise about it.

Less than half the hydration websites examined in a 2016 peer-reviewed paper included overhydration as a hyponatremia risk factor. Far fewer websites (a mere 7.3%) acknowledged the wisdom of drinking to thirst. Instead, they encouraged drinking beyond thirst.

The confusion started in the 1940s. That’s when the US National Academy of Sciences started telling people to drink 84 ounces of water per day. This was not an evidence-based recommendation. There was no science behind it.

In the 1960s, 84 ounces became 64 ounces thanks to Irwin Stillman, a physician who recommended that folks drink eight glasses of water eight times per day. This “8×8” rule also was not evidence-based, but it was memorable.

Today, many people take that homespun wisdom to be fact. And most people believe that drinking more water is healthier, period. The concern is always oriented around preventing dehydration.

But hardly anyone talks about overhydration. This is an unfortunate oversight for the exercise community, because overhydration has proven to be more dangerous than dehydration.

It’s worth mentioning that most biological inputs, be that vitamin D or water, have “U curves.” We tend to see problems with both too much or too little of a given substance, exposure, etc. We can chalk this up to over-simplified public health messaging but can also take some personal accountability… I know I’ve practiced the “more is better” philosophy enough to barely miss a Darwin Award or two.

The main risk factor for developing exercise-associated hyponatremia is the overconsumption of hypotonic (low electrolyte) fluids. We’ll talk about the symptoms and treatment of hyponatremia in a minute, but first I want to address why it occurs.

The American College of Sports Medicine (ACSM) is one such source. They continue to recommend that athletes vigorously replace fluids to prevent dehydration. The main goal of hydration, according to the ACSM, is to prevent mass loss from water.

Thanks to this misguided view, distance athletes have nearly unlimited access to water during races. They’re poked, prodded, and pestered to drink—whether they’re thirsty or not.

Should we be surprised that a large percentage (~15%) of distance athletes develop exercise-associated hyponatremia? I’m not.

But it’s not just the ACSM. Bad hydration advice saturates the internet. Let’s look at some other examples.

Most websites dish out lousy hydration advice. Believe it or not, this has been scientifically shown.

In a 2016 paper published in The Physician and Sportsmedicine, a group of researchers used common Google searches—“hydration guidelines”, “drinking fluids”, etc.—to yield 141 unique hydration-related websites. These websites weren’t just popular news sites and blogs. Over one quarter were related to scientific organizations, peer-reviewed literature, or a medical professional.

They were looking to see which sites had their facts straight. Most didn’t.

Here are some examples of widespread hydration myths on the internet:

But weight loss isn’t always an accurate guide to dehydration. One study, for instance, found that ultramarathon runners lost 3.5% of their body weight during the race, but still maintained adequate body water.

How is this possible? Obviously they lost sweat. What happened, most likely, was that the water from muscle and liver glycogen (stored glucose) liberated during exercise entered circulation to maintain blood volume. In other words, we have backup water stores.

Finally, thirst is an excellent guide to hydration needs. It’s triggered by a tightly-calibrated system of osmoreceptors that monitor fluid and electrolyte levels in the blood. When blood volume gets too low—or when electrolyte concentration gets too high—we get thirsty.

Even during hard exercise, drinking to thirst is sufficient to maintain fluid balance. Multiple studies bear this out. But when we drink beyond thirst, we risk overhydrating and suffering the consequences.

A common argument for drinking more water? That if we become dehydrated, we’ll lose our ability to cool ourselves with sweat. Then our risk of heatstroke will go up.

This myth is everywhere. Over 95% of hydration-related websites warn that dehydration causes heat illness.

But the evidence says otherwise. Consider the following:

My last point is that most cases of heat illness occur in very young or very old people. Why? Because these populations often have sluggish sweat mechanisms. It has nothing to do with hydration status.

Most sources breeze over the dangers of overhydration. They don’t mention that excessive fluid consumption is the number one cause of exercise-associated hyponatremia.

Athletes are especially prone to exercise-associated hyponatremia. There are intuitive and non-intuitive reasons for this.

The intuitive reason is that athletes lose both water and sodium through sweat, but they only replace water. And thanks to the widespread “drink more water” sentiment, they replace it too aggressively.

What this means in practice is slamming a large amount of water without electrolytes and then training hard could be very troublesome. On top of diluting electrolytes, our normal kidney function will be slow to remove the excess water.

When you combine these risk factors, it’s a recipe for exercise-associated hyponatremia. Let’s talk about the symptoms now.

Mild cases you can handle yourself, but severe cases will likely require medical attention. To be clear, some of these symptoms may overlap, so every case should be treated individually.

The early symptoms of hyponatremia include dizziness, fatigue, mild nausea, and bloating. As the condition worsens, the hyponatremic person may also experience:

Sports doctor Tim Noakes has seen many of these symptoms in the distance athletes he’s treated. He’s seen more severe symptoms too.

“You become confused and very typically lose consciousness,” Noakes is quoted as saying, “or else as you lose consciousness you have an epileptic seizure. That’s the usual [hyponatremia] presentation in the advanced cases.”

In these cases, urgent treatment with IV hypertonic saline fluids (saltwater) is required or the person may die.

There are three main treatments for overhydration:

Use treatments one and two when treating mild to moderate hyponatremia. The overhydrated person should stop drinking water and start drinking a hypertonic solution containing about 3% NaCl (salt). That’s the equivalent of putting 32 bouillon cubes in a liter of water.

There’s some controversy over oral saline (as opposed to IV saline) for treating hyponatremia, but a handful of studies suggest it works just fine. In one trial, oral saline was just as effective as IV saline for reversing hyponatremia in runners after a 161-km race.

For severe cases of hyponatremia, IV saline is the way to go. The patient may be unable to hold fluids down. They may even be unconscious. Obviously, a qualified medical professional should administer this treatment.

Everyone worries about dehydration, but overhydration is the more pressing problem. Here’s a short list of practical takeaways for preventing overhydration and the resulting hyponatremia:

One last thing. You can help prevent overhydration—which has killed more than a few athletes—by spreading the word and sharing this blog. Help us fight this misinformation. We need all the help we can get.