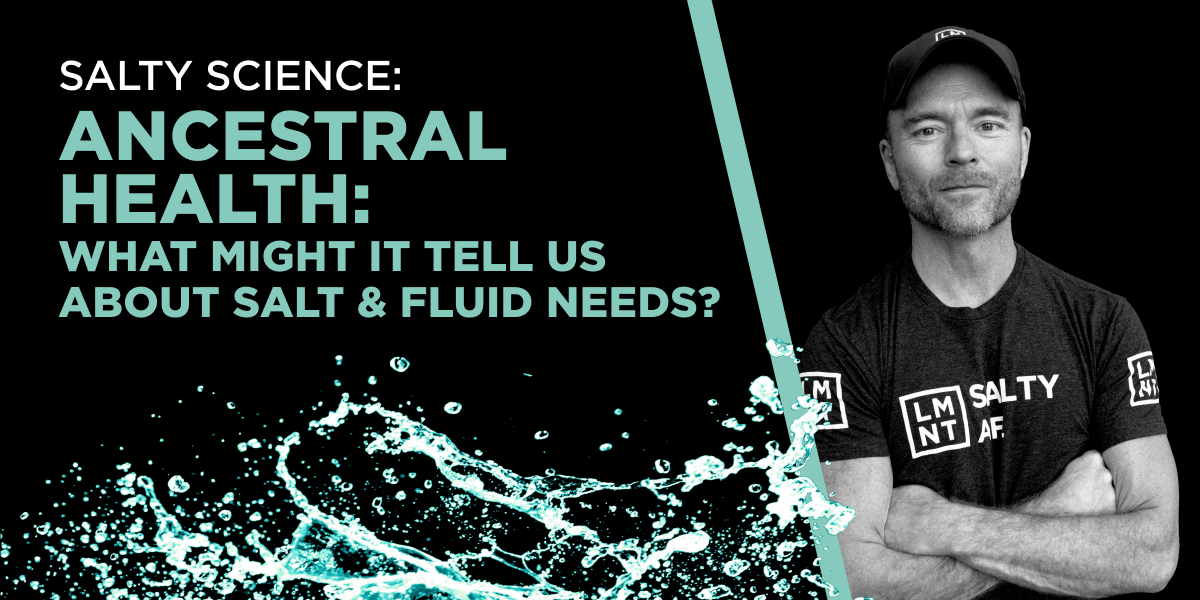 Ancestral health: What might it tell us about salt and fluid needs?

From the desk of
Robb Wolf
Science → Ancestral health: What might it tell us about salt and fluid needs?

Humans are a bit like camels in an oasis. Oh brother, Robb’s lost his marbles…

Bear with me. Over the past few years, I’ve received a number of great questions in the vein of, “From the perspective of evolutionary biology/ancestral health, how much sodium should we consume for optimal health outcomes?”

Well, by modern dietary standards, our ancestors consumed relatively low quantities of both water and sodium, and were all but free of the rampant cardiovascular disease and hypertension plaguing today’s westernized populations. But this means almost nothing with regard to health outcomes—I’d wager that the primary drivers of most modern diseases are much more likely downstream of insulin resistance and metabolic syndrome than overconsumption of salt.

Still, I’m thrilled folks are thinking about this from an evolutionary biology perspective. Evolutionary medicine is arguably one of the most powerful tools we have for understanding our biological world. Leaning into that framework, two things stand out to me:

Our bodies can process minerals like machines and survive on less fluids than any other primate by a factor of 2, but we’re being inundated with misinformed hydration recommendations like, “Drink 8 glasses of water per day!” and “Avoid salt, it’s bad for your heart!” Our evolutionary biology is at odds with our environment: we’re camels in an oasis.

Right now, this all may seem like a paradox. But when we encounter a paradox in biology, it usually just means we haven’t yet asked the right question. So in this article, I’ll explore fluid and electrolyte consumption through the lens of ancestral health, while keeping an eye turned toward the underlying science of hydration. Let’s dive in.

What Do Our Ancestors Have to Do with Our Health Today?

The evolutionary biology framework may at first seem like an odd frame to take, but I’d argue that one of the most important avenues to understanding human health IS the evolutionary history of our species.

No other organism on the planet has been divorced from its environment, circadian biology, microbiome, and dietary practices the way humans have.

This brings to mind Discordance Theory, which makes the case that any change to the environment of an organism (dietary, microbial, photoperiod, or otherwise) could lead to negative health consequences.

Me? I’m not so dogmatic. Although I’ve championed the idea of ancestral health and the Paleo diet for nearly 25 years, I do not believe that deviating from ancestral norms is inherently harmful. New inputs to our experience may be positive, negative, or neutral. For example, the advent of agriculture and modern technology have allowed for a massive increase in human population. Even so, it’s clear that human health has suffered due to the consequential diet and lifestyle changes.

I’ll leave it up to the more philosophically oriented among you to decide which consequences are good or bad. My point is: if at some point we were metabolically, cardiovascularly, and generally healthier as a species, it may benefit us to study health (including fluid and electrolyte needs, plus contributing factors like physical activity) through the lens of evolutionary biology.

We’ll do that now, starting with sodium.

What’s at Stake? Sodium & Health Outcomes (Then vs. Now)

So, is it a bad idea to consume sodium in excess of ancestral levels? Let’s explore the obvious undertones of this question: the ever-popularized health ‘consequences’ of sodium consumption. Put that salt shaker down, Jimmy, your heart will thank you!

Anthropological data makes the case that contemporary hunter-gatherers consume remarkably small amounts of sodium. The Tsimane, for example, consume a low-sodium diet due to their hunter-gatherer way of living—they also eat little refined food, get lots of sunlight, have a healthy and diverse gut microbiome, and maintain lifelong social connections. Now, of all populations, which has the lowest recorded rate of cardiovascular disease? Yup, you guessed it: the Tsimane.

Hypertension, cardiovascular disease, and related conditions are virtually unknown in societies that do not consume a westernized diet, which is notoriously high in sodium. So, case closed, right? We’re consuming levels of sodium above ancestral norms and this is the cause of many of our problems. Reduce the sodium intake, reduce our problems.

Well, maybe not… There are some interesting realities we need to square up in order to make truly informed decisions about sodium intake as it relates to our health. We’ll do that now.

Wait, Sodium Isn’t Bad for You?

I have discussed misinformation around sodium extensively in other articles so I’ll keep it to a brief recap here:

This is where things begin to look a bit jarring. Our best data suggests that most folks have the lowest risk of cardiovascular disease at around 4–6 grams of sodium per day. That’s nearly double what most medical authorities recommend, and close to 3 times what we’d expect from a truly ancestral diet!

Add to my above points that the Standard American Diet (SAD) is notoriously high in processed foods, which contribute more than 70% of U.S. adults’ sodium intake, and it begins to make sense why high sodium intakes are conflated with poor health outcomes.

So, what gives? For starters, fluid consumption.

What About Fluid Intake? (Then vs. Now)

This whole time, we’ve focused solely on how much sodium we consume and how that compares to ancestral norms. At first blush this seems all well and good. But consider this: Normally, when folks speak about hydration, they think only about water consumption. But proper hydration requires water and electrolytes.

As we examine sodium intake from an ancestral perspective, we’re committing the same error, only in reverse. Fluid consumption is equally important to the debate around ancestral health and sodium intake as electrolytes are to healthy hydration.

If you’re still with me, this is where things get really interesting. It appears a significant human adaptation, which sets us apart from all other primates, is our profound ability to conserve water. This paper, Evolution of water consumption in humans, establishes that humans have adapted to consume roughly half as much water as our closest primate relatives, even despite the fact we sweat more than any other organism (on a size-matched basis) other than horses!

Contemporary hunter-gatherers appear to have an average fluid intake—split between direct water consumption and water derived from food—of about 2 liters per day. An important aside to keep in mind: many of the individuals in these remaining tribes are quite small in stature. And since larger individuals typically require more fluids, a sense of scale is needed. But all else being equal, 2 liters is still approximately half of the amount of fluids regularly consumed by US Americans.

Modern society urges us to drink eight 8-oz. glasses of water per day despite ZERO science to support it. Not to mention, food, coffee, tea, and other beverages are a substantial source of water too.

So, germane to our original question: we must not ignore fluid intake when evaluating our sodium intake. And in fact, we may need more electrolytes (especially sodium) than our ancestors did just to maintain a proper baseline.

My two previous arguments—centered on salt intake and fluid consumption—become all the more articulate when we consider the physical demands that athletes, firefighters, construction workers, and even washed-up martial artists like myself experience in the modern world.

Savvy students of anthropology may push back on this, citing that modern hunter-gatherers are capable of incredible feats of endurance, such as this 8-hour persistence hunt. Remarkable, no doubt, but it’s important to remember that no single individual does this on a regular basis. An effort like this is followed by days or even weeks of relative rest, which affords them time to replenish electrolyte stores more slowly than the modern athlete.

Athletes practicing multiple times per week with frequent competitions (and those working in other labor-intensive professions) must replenish electrolytes rapidly and frequently to accomplish their jobs.

We have worked with several NHL teams that track their players’ sweat loss during practice and games. It’s not uncommon for players to lose up to 10 pounds of sweat and 10 grams of sodium in a single 2-hour period! This puts the one-size-fits-all recommendation of 2.3 grams of sodium per day in a questionable light, to say the least.

Firefighters are another great example—particularly those who work in wildfire mitigation. These individuals can experience colossal fluid and electrolyte loss due to heavy protective clothing, lengthy excursions into remote locations, and proximity to fire itself. This may be an extreme example, but there are many scenarios in which individuals must work in hot, uncomfortable environments for hours on end, day after day.

I’ll add a short anecdote to drive this point home: I train Brazilian jiu jitsu 2-4 days per week. I’ve weighed my gi before and after training, and found that it can be 5 to 6 pounds heavier after a 2-hour session. Interestingly, my decrease in body weight is always greater than what my gi sops up, so um… apologies to my training partners.

My point is: I could be idealistic and say, “I’ll just match the electrolyte intake of my hunter-gatherer ancestors!” but a wet fish named reality will undoubtedly whack me in the head. I routinely train at a level that a whole food, minimally processed diet simply cannot provide sufficient electrolytes to support (especially sodium). I can either honor that and supplement appropriately, or I can be neurotically adherent to Paleo and my fight nickname can be Robby McCramperkins.

It’s important to understand what ancestral health can and cannot tell us about the modern world. As a framework, it’s arguably the most powerful tool we have for asking questions related to the natural world—particularly to untangle chronic degenerative disease. By studying alterations in diet, lifestyle, circadian biology and gut health, we can make a sound case for optimizing nutrition, hydration, movement, gut health, and keeping a close community.

But as it relates to salt and fluid needs, ancestral health may be less informative. So I’m proposing a new framework: one in which optimal electrolyte intake is gauged with respect to activity levels, accompanying sweat loss, and an appropriate total fluid consumption.

In today’s world, relative to ancestral standards, we have:

Taking all of that into account, it suddenly becomes clear. Many of us are drinking too many fluids and getting too few electrolytes.

So here’s my recommendation: track your electrolyte intake for a while to get a sense for where it’s at. Then, through diet and supplementation, shoot for 4–6 grams of sodium per day, levering upward to the degree that these diet and lifestyle factors play a role in your life.

Or, even simpler, increase your electrolyte intake and see how you feel. Just be sure to choose smart sodium sources such as LMNT, pickle juice, olives, and electrolyte homebrew recipes. If your body needs more electrolytes, it’ll express its gratitude with better energy levels, mental acuity, and mood.